Kellogg Company’s energy and GHG reductions since 2005 are the result of many energy-saving projects and initiatives, small and large, at our facilities worldwide. Our plant in Botany, Australia, for example, has reduced its energy usage by 7 percent since 2009, even as production at the plant increased 2 percent. The plant accomplished this by installing an energy management system aimed at improving the control and monitoring of key equipment, such as air compressors, boilers, chilled water units and cooling towers. 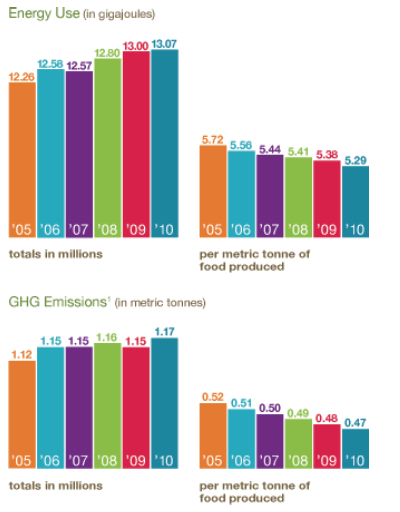 In another example, our cereal plant in Belleville, Ontario, reduced electricity use by 9 percent and gas use by 11 percent in 2010 by improving its manufacturing processes. For example, they installed new machines that create less excess “over spray” when spraying coating onto product. This new technology reduced by more than 100,000 pounds the amount of coating required to make 50 million pounds of product. This in turn saved electricity, since less of the coating needs to be made. The Belleville plant also implemented a more effective inspection method for oven doors. The new method better detects poor door seals so they can be repaired, thereby reducing heat wasted and gas used.