With the continuing increases in energy costs and the requirements of Biological Nutrient Removal (BNR), the design of the aeration system has become one of the most important aspects of the design of the activated sludge process.

The single point design pressure is based on a single condition, but in reality, the actual pressure is dynamic, based on airflow and valve positioning. The large number of valve positions and influent conditions normally limits the engineer to only design for a single pressure, but the use of a single design pressure can lead to improperly sized equipment, which will promote operational difficulties and energy inefficiency.

Incorporating pressure losses and valve positioning calculations into the activated sludge model simulation allows the engineer to see the pressure and valve position changes as the influent process conditions change diurnally and seasonally so equipment can be sized accordingly.

This paper will introduce the process of calculating and incorporating pressure losses, blower speed and valve positioning into the activated sludge model simulation, quantify the control response for conventional and innovative control strategies, and demonstrate the benefits of flow-based blower control schemes versus pressure-based blower control.

The basis of the model was an actual biological nutrient removal (BNR) wastewater treatment plant (WWTP) with a hydraulic capacity of about 19,000 m3/d (5 million gallons a day). The results of the simulation runs are based on this plant but have broad validity.

The aeration tank was modeled as a plug flow reactor; this model allows the reactor to be divided into numerous continuously stirred tank reactors (CSTR) in series. This, in turn, allows a great deal of operational flexibility in the model so that various conditions can be simulated. The reactor for this model was divided into eight (8) CSTRs in series. The dynamic inputs for the simulation were from actual sampling of influent flow, diurnal peaking factor, cBOD, TKN, and TSS data. The influent fractions were considered to be constant. The analysis was run for 259 days at a 15 minute time interval.

Within the aeration system the control valves are used to balance the airflow into the aeration zones. The most common control valves used for aeration control are butterfly valves. Control valves can be modeled by using flow coefficient (Cv) characterization curves. The Cv curve provides the relationship between the valve position and Cv. The curves are based on empirical data derived from laboratory testing done by the valve manufacturers. Figure 2 is an example of a Cv curve, and Equation 1 is used to describe the CV curve. 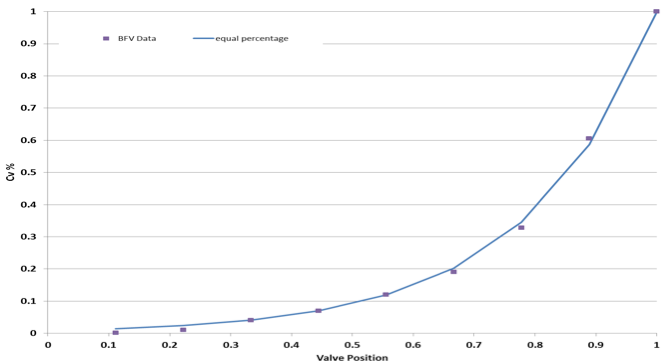 Blowers generate the airflow for the aeration system. Depending upon the type of blower, the airflow output is dependent upon the system pressure (Psys), blower speed, or inlet valve position and discharge vanes positions. For this paper only the positive displacement type blower was modeled, so only blower speed is needed to model the blower. Equation 3 was used to calculate the blower output based on percent of maximum speed (N). Depending on the control method of the blowers, the blower speed is modified until the control variable, airflow or system pressure, is within the control system dead band.

The goal of aeration control is to provide the required airflow to meet the current oxygen demand in each aeration zone while keeping the system pressure as low as possible. For this to happen, the blower control and the distribution control need to work together efficiently.

There are two methods for the distribution control to communicate to the blower control that a change in total airflow is required:

2. Airflow control, where the actual total airflow requirement is sent as a set point to the blower control.

1.a. Constant Pressure Blower Control At regular intervals, the aeration control system positions the air control valves to distribute the air to each aeration zone based upon the calculated airflow set point (typically using proportional-integral feedback control based on a dissolved oxygen error signal) for each zone. At the same time the blower control adjusts the output of the blowers to keep the system pressure within the specified dead band of the pressure set point. As the control valves open as airflow demand increases, the system pressure will drop and the blower control will then increase airflow to maintain the system pressure at the set point. The same control applies with the valves closing as airflow demand decreases, just in the opposite direction.

2. Flow Based Blower Control At regular intervals, the aeration control system sends a total airflow set-point to the blower control, and then positions the air control valves to distribute the air to each aeration zone based upon the calculated airflow set point for each zone.

The valve control includes dynamic most open valve logic to promote low system pressure by having one of the control valves become the most open valve (MOV) at 90% open and allows the other control valves to seek their position to meet the airflow requirements. When a control valve that is not the MOV is calculated to be at greater percent open than the MOV, then that valve becomes MOV, and the previous MOV will be able to close.

Changes in blower, valve and pipe sizing were all tested to determine their effects on system performance and operating efficiency. Only the results for testing the aeration control concepts are shown in this paper.

A simulation was run for each of the three aeration control logic concepts described above; all simulations used the same airflow piping, valve sizes and airflow rates. The control responses were tuned in the model to provide best possible performance. The simulations were run for seven days with a 15 minute control step interval.

1.a. Constant Pressure Control The constant pressure simulation had a system pressure set point of 7.6 psig, with a 0.05 psig dead band on the blower control.

2. Flow Based Control The flow based simulation had the MOV set at 90% and the blower control had a 30 scfm or about 1 % of the blower capacity dead band. Figure 7 shows the valve positions and system pressure of the simulations. 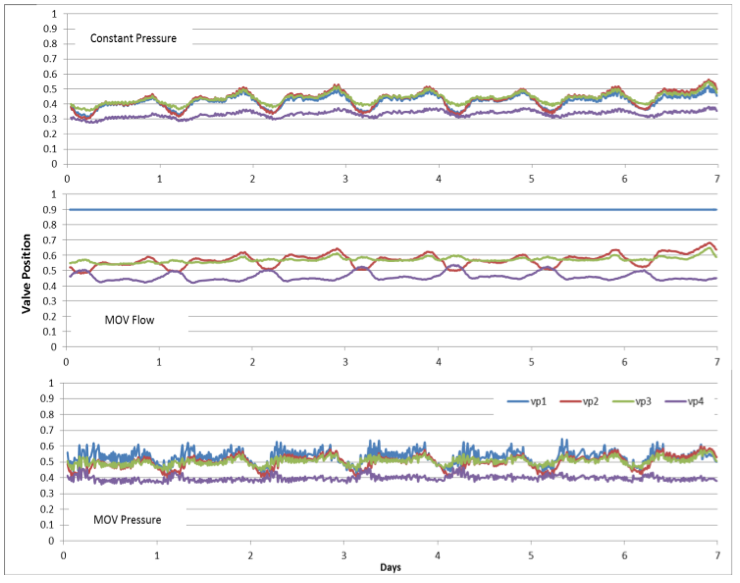 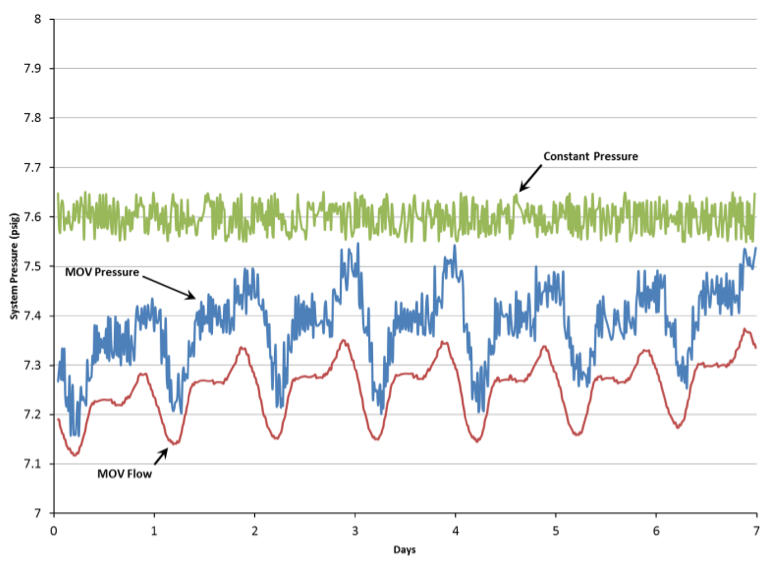 It was demonstrated that the process of calculating and incorporating pressure losses, blower speed and valve positioning into the activated sludge model allows the engineer to see them change as the influent process conditions change diurnally and seasonally, so equipment can be sized accordingly.

Using the combined models for control valve sizing, estimating the pressure requirement for the blower, and comparing the dynamics of three different types of aeration control methods was also demonstrated.

At this point, the aeration system model could not be compared to actual operational data. A comparison would be valuable, and should be done to determine the overall accuracy of the model. However, the valve, blower and pressure models were developed using methods already used in design, which gives confidence that the models as used in the paper would provide an accurate design tool.