Nitrogen (N2) is used in many facilities for a variety of purposes. The most common source of N2 is through the use of bulk liquid storage. A plant owner was recently surprised to learn that a large portion of his N2 was disappearing, without ever being used by his production process. This article discusses where it went and what we could do about it.

The facility where the study was done is a small metal fabrication shop.The company uses three different lasers to accurately cut various parts out of metal sheets. Nitrogen is used as a shield gas to prevent the steel sheets from becoming discolored by the cutting process due to oxidization when the metal is at high temperatures.

The owner had contracted with a local welding gas supplier to provide liquid nitrogen, which was stored in a large Dewar bulk storage tank outside directly beside the facility. About every two weeks the supplier would send a truck to fill up the storage tank with the equivalent of about 4,700 m3 of nitrogen per load.

The plant owner was a bit curious; his nitrogen usage didn’t always track his production throughput. He found out that thermal mass flow meters built for compressed air could also measure his N2 flow, so he fitted each laser with a meter designed for the 400 psi pressures flowing into his machines. Each flow meter had a wireless transmitter, the output of which was continuously captured by his desktop computer. Armed with this data, it wasn’t long before the situation started to become a bit clearer.

Some unit calculations would need to be done. The supply company delivered in cubic meters and the flow meters were calibrated in cubic feet, however, the readings showed an interesting fact. During some months the lasers used just slightly over one third of what was delivered, something else was consuming the nitrogen! Over a period of six months the lasers had only used an average of 55 percent of the delivered gas. This almost doubled the effective price of the gas to a cost of /$0.98 per cubic meter or about /$0.028 per cubic foot. 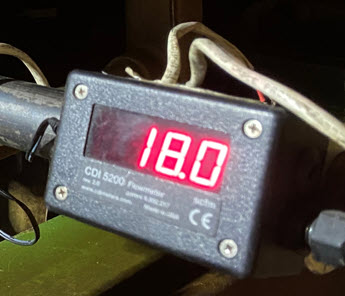 A bit of research turned up a bit of a surprise about the characteristics of dewar storage of liquified gasses. The vessel holding the bulk liquid nitrogen is like a large thermos bottle, with an outer and inner shell and an evacuated layer in between. Within the vessel is the liquid, which must be kept at the –320°F (–196°C) it takes to keep the N2 in liquid form. There is a constant battle within the container, with the heat that leaks in being necessarily counteracted by evaporating Nitrogen. So, for example on a hot windy summer day on the weekend, with the highest head infiltration, when the facility is not in operation, Nitrogen must boil off to maintain the storage temperature. The excess gas must be off-vented to atmosphere or hazardous pressures will cause the vessel to fail. Thus, one of the causes of liquid loss was solved. The plant had a 16-hour x 5 day a week work schedule, during all remaining hours there was significant gas loss, and more in the warmer summer months due to higher ambient temperatures.

There can also be other losses in the storage. Leakages within the plant can also cause the wasted consumption gas.  And there are transfer losses in connecting and disconnecting liquid transfer hoses between the delivery truck and the tank. 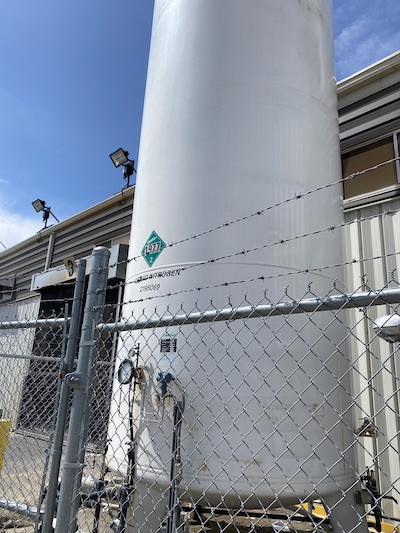 Large Dewar style storage vessels, constructed like a large thermos bottle, have the disadvantage in that a portion of the gas must be vented to atmosphere to control the pressure during periods of plant inactivity.

But doing a few simple calculations yielded another surprise. The compressed air system he had within his plant was producing the air at an average power consumption of 20 kW per 100 cfm, a typical compressed air system specific power level for a variable speed drive compressor. His electricity costs were /$0.07 per kWh. Converting these units, he found his actual cost of producing compressed air was /$0.00023 per cubic feet about 120 times less than his Nitrogen costs. Research told him that the 99.995% purity he needed consumed about 5.3 units of compressed air for every one unit of Nitrogen using PSA (pressure swing adsorption) style generators. Doing the math, he found he could gain a significant annual saving if he generated the gas in-house.

There were some additional energy costs, the pressure he needed was about 400 psi, this required a booster compressor which added a bit to the cost of producing nitrogen. But when all was said and done, he found he only needed one 25 hp air compressor and a 5 hp booster compressor to do the job.

Having an additional 30 hp in air compressors generates some waste heat, which would benefit the plant in the winter months, saving natural gas costs. And the plant had some hot dip tanks where metal parts were treated before going to the paint line. These tanks use electric heaters to warm the treatment baths, it was found that the heat of compression could be used to supplement this process and also save electrical energy, all possible if a heat exchanger was fitted onto the new compressor oil cooling circuit.

One of the characteristics of this plant’s electrical bill is that the electrical demand cost (/$ per kVa) charged by the utility was about 50 percent of the total bill, the remaining cost is the kWh charges. This is typical of facilities that have high peak demands during the day and significant periods of non-production during evenings and weekends. The proposal was to control the nitrogen generation times schedule so it was only running during off-peak times. This required a larger Nitrogen storage vessel, but with proper control the cost of the gas would reduce by about 40%.

The local power utility was very interested in the recovery of waste heat and were prepared to grant some incentive funds to help with the project, expected to gain a simple payback of less than 2 years.

The bulk storage of liquid Nitrogen using a Dewar system has the disadvantage in that some of the gas can be lost due to venting. This effect is more pronounced if there are periods of time where no nitrogen is being drawn from storage, and where higher ambient temperatures are being experienced, such as during warm summer months. The production of onsite Nitrogen is often a less costly process, even when the energy needed to generate compressed air is factored into the operating costs. Some side benefits like using waste heat that to displace building or process heat can make the project even more attractive.