To produce healthy, high-quality cooking oil, this food processing company crushes and processes oil seeds shipped in from local farms. The oil produced is thought to be the healthiest cooking oil available, because it is low in saturated fat, high in monounsaturated fatty acid (MUFA), and polyunsaturated fat (PUFA), like omega-3 fatty acids. To increase the energy efficiency of its oil seed crushing and processing facility, the company optimized its compressed air system by combining three separate systems into one. Some end-use optimization was done to correct low pressure, particularly caused by some critical high-flow, short-duration events. Although all of the recommendations in this article were not followed, the facility still managed to reduce annual energy costs by 36 percent—or the equivalent of \$48,000 per year (at 10 cents per kWh)—and earn an energy rebate to alleviate capital costs.

The site uses compressed air for a variety of production processes. Dominating the load profile is the need to back flush the filter press used to separate the oil from the mash. Due to its high flow, the installation uses a separate compressed air system consisting of a single air compressor, large storage, and a back-pressure regulator. Other systems are in place to feed the dry charge fire suppression system and general production processes. Because some of the piping is subject to freezing temperatures, a desiccant dryer is used for general instrument air. A separate compressed air system was installed in a new expansion to feed production processes in the new processing area.

A compressed air system assessment was conducted at the site, and uncovered the following major findings:

Table 1: The table above itemizes the constituents of demand discovered by measurement.

Because separate systems of air compressors were running independently at this site, it was difficult to produce air at optimum energy efficiency. Although, on average, each system was running at partial loading, the pressure profile on two of the systems was so poor that maintenance staff resisted the possibility of tying the systems together to increase efficiency. If the pressure issues (as seen in Figures 1 and 2) could be indentified and fixed, then the systems could be combined into a single, well-controlled system running at lower pressure with minimal part-load operation. Installation of a new VSD could reduce air compressor unloaded run time and improve overall system efficiency. 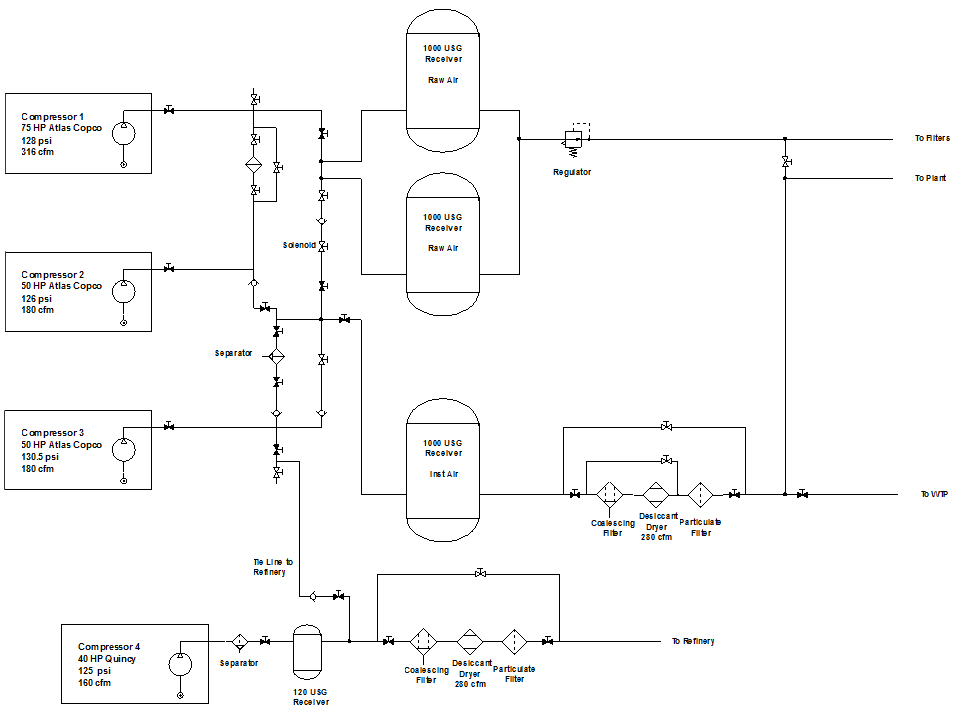 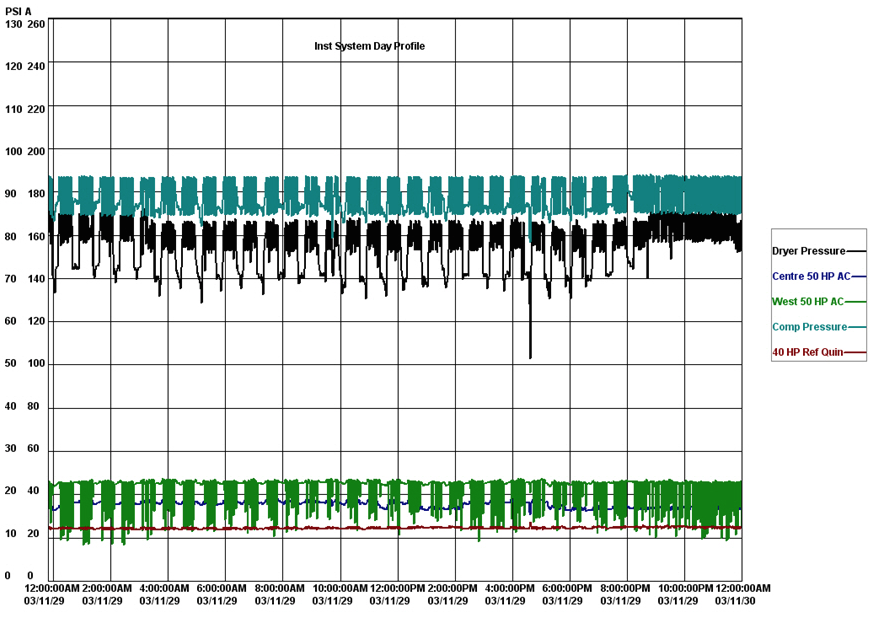 Searching for the Unknown Load

As can be seen on the pressure profile in Figure 3, the instrument compressed air profile was dominated by a regular event that pulled plant pressure down to around 70 psi for 14 minutes spaced every 43 minutes. Interviews were conducted to try to determine the cause of this load, and although much time was expended, nobody knew what could cause such a pattern. During the course of the audit, the load was finally found by thoroughly reviewing each air demand one at a time until the offending end use was found. The problem was a misadjusted bag house set to pulse excessively. 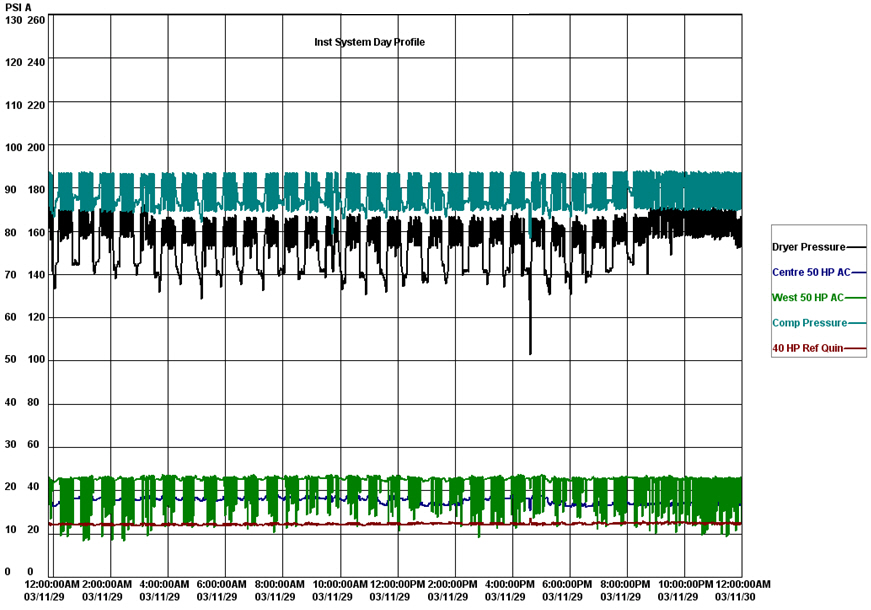 Figure 3: The instrument compressed air pressure profile was dominated by an unknown load.

Trouble was being experienced on an outdoor bag house filter that uses pulses of compressed air to clean filter elements. These units are normally adjusted to fire 0.10-second pulses every 10 minutes. While troubleshooting, the maintenance staff had altered the timer settings so the pulses were occurring 0.75 seconds every 2 seconds. This caused a significant air pressure differential on the compressed air lines, as they were not designed for the resulting flow. The increased demand was enough to overload the instrument air system, pulling down main compressed air system pressure.

A separate compressed air system (raw air) existed to supply compressed air to the three crude oil filters in the crusher building. This system consists of a 75-hp, 128-psi air compressor tested at 290 cfm output capacity, with two 2000 gallon storage receivers (18.5 cf/psi), a pressure regulator, and various distribution pipes and control valves. The filters, which filter crude grain oil, are taken out of service one by one at semi-regular intervals during the course of normal production activities and blown to clean the filter elements.

Figure 1 shows the operation of the system over a period of time. Note how the raw air pressure in the receiver is pulled down to as low as 50 psi when compressed air is removed from it. Note also how the raw air compressor goes to full load during blow cycles and unloads between cycles. During this unloaded period, the air compressor continues to run—yet it still consumes about 16 kW of energy. Operation of a lubricated screw compressor in this manner will also cause high lubricant carryover, which will contaminate the filters. It was determined this power could be saved if the air compressor was turned off between cycles. Alternatively, if the air compressor continued to run, it could supply load to the instrument air system.

Further investigation revealed that a back-pressure regulator had been installed between the air compressor/storage tanks and the filter presses. This regulator was supposed to restrict the flow of air once the pressure in the receiver tanks got to a certain low level, but the valve had failed. This failure allowed the pressure to fall too low at the air compressor, making the system unsuitable to tie into the instrument air system.

The instrument air dryer had manual purge adjustment that had been altered over the course of time.  Dew point readings showed that the dryer was only producing compressed air with levels slightly below zero—instead of the rated -40°F requirement. Adjustments were made (as shown in Figure 4) by increasing the purge flow to normal, which allowed the output dew point to fall to more normal levels. Ultimately the air dryer was replaced with one featuring dew point dependent switching to save wasted purge air. 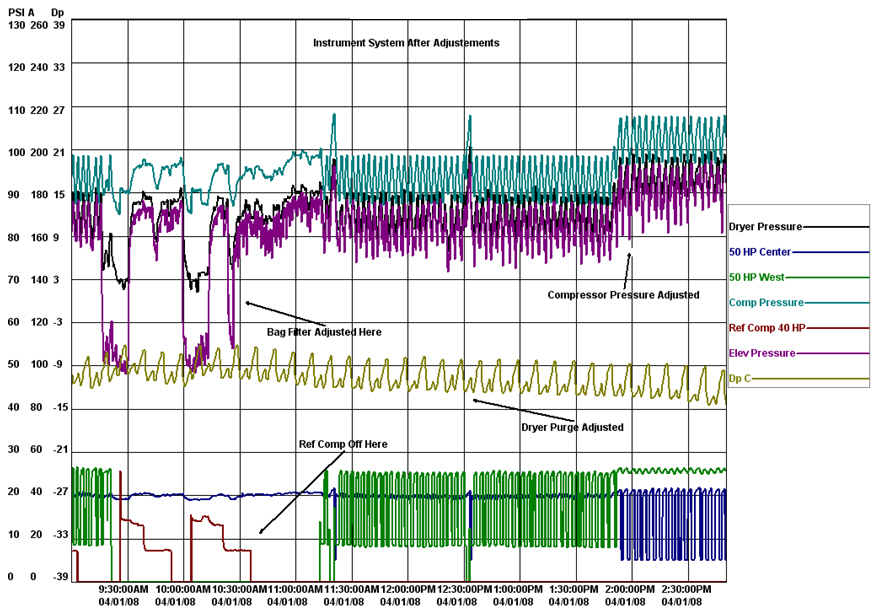 Figure 4: Adjustments were made to the air dryer to correct low-pressure occurrences and increase efficiency.

Various compressed air system improvements were implemented to correct the situation and to gain a predicted 50 percent reduction in energy consumption with improved system pressure. The projects included:

Improvements were verified about two years later, and although all recommendations were not followed, energy savings of 36 percent were gained—saving the equivalent of \$48,000 of energy per year (at 10 cents per kWh). A substantial energy incentive was granted to help pay for the cost of a new air compressor, an air dryer, and other modifications. Estimated simple payback calculated to about 2.4 years.