A large fabric mill has implemented an energy management system based on the ISO 50001 standard to track their compressed air system efficiency.  As a result of information gained from this system, and measures learned in some recent compressed air training, the company has reduced their compressed air system costs while at the same time achieving increased fabric production output. The savings were gained by not only optimizing the supply side of the system, but by also addressing the end uses.

The large fabric mill is located in Asia and is one of four integrated textile-manufacturing facilities owned and operated by a private company. Mill 2, the subject of this article, produces about 5.5 million yards of fabric annually.

The compressed air is conditioned using refrigerant style dryers.  Starting in 2008 the company started replacing their dryers with units with inverter drives to save energy, and improving environmental impact because these dryers contain non-ozone depleting refrigerants. 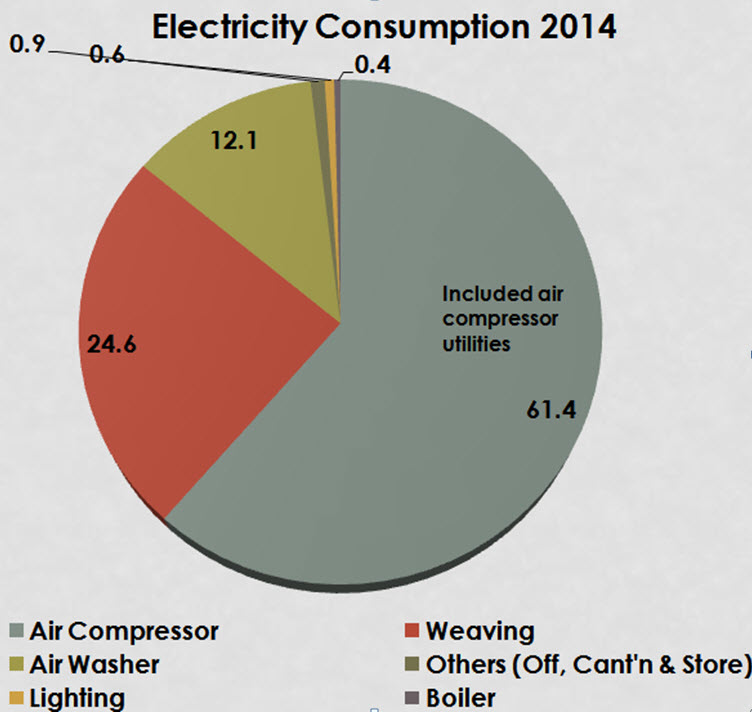 Activities identified for attention were:

The company's production method uses air jet looms to produce their textiles.  Within the jet loom there are precision nozzles that direct the yarn for various weaving operations in producing the fabric. The company received information that their loom supplier had developed a more efficient reed (comb-like item in a loom) for their existing looms that achieves lower compressed air flow and allows lower pressure to be used, with projected savings of 20 percent. A total of 130 looms were retrofitted resulting in a compressed air flow reduction of about 680 cfm.  These conversions also reduced the minimum required main system pressure for the plant alloweing the air pressure to be reduced to a more efficient level.

As part of a production improvement project the company replaced 63 of their less efficient looms with 40 more efficient models.  The newer looms produced wider rolls of fabric, work faster, and produce more product for a reduced amount of energy.  Each loom consumes slightly more air per unit but there are a reduced number of units (23 less).  The change increased the amount of fabric produced per day by 50% while consuming about 600 cfm less in average compressed air flow.

As a result of the installation of the energy saving reeds the company was able to reduce the header pressure in the plant by about 7 psi.  The reduced pressure, and changes as a result of other energy conservation measures, reduced the flow of compressed air to the point where the number of running  centrifugal compressors could be reduced from 8 to 7 .  The system was reconfigured so the compressors better matched the compressed air consumption, in terms of energy consumption, resulting in a nameplate capacity reduction of 250 kW. 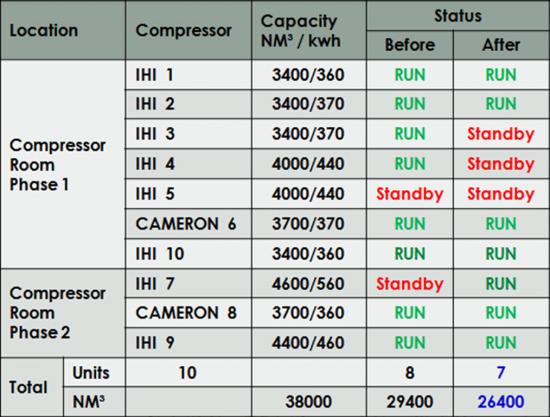 When the main line pressure was reduced it was discovered that an auto drawing machine started to malfunction due to low pressure events.  The first solution to this problem was to feed this machine with a separate screw type air compressor at higher pressure, but this was estimated to consume about 14,650 kWh of electricity per month because the compressor was oversized and was working with minimal storage receiver capacity.  Instead, the company purchased and installed a compressed air powered booster that takes already pressurized compressed air at 5 bar pressure and increases the pressure to the required 6 bar.  This eliminated the separate electric compressor and saved \$1,500 per month in electrical costs.

Figure 3: Booster eliminated the need for a separate electric compressor

When analyzing the data, two air compressors in particular were identified as low performers and scheduled for inspection.  During subsequent overhauls a number of internal defects were found and corrected.  After the work was done, as shown in Figure 4,  it was found the  efficiency of both compressors improved by about 10 percent - saving 69,000 kWh per month totaling \$70,000 per year.  Since overhaul costs were about \$72,800, the payback for this measure is slightly over one year. 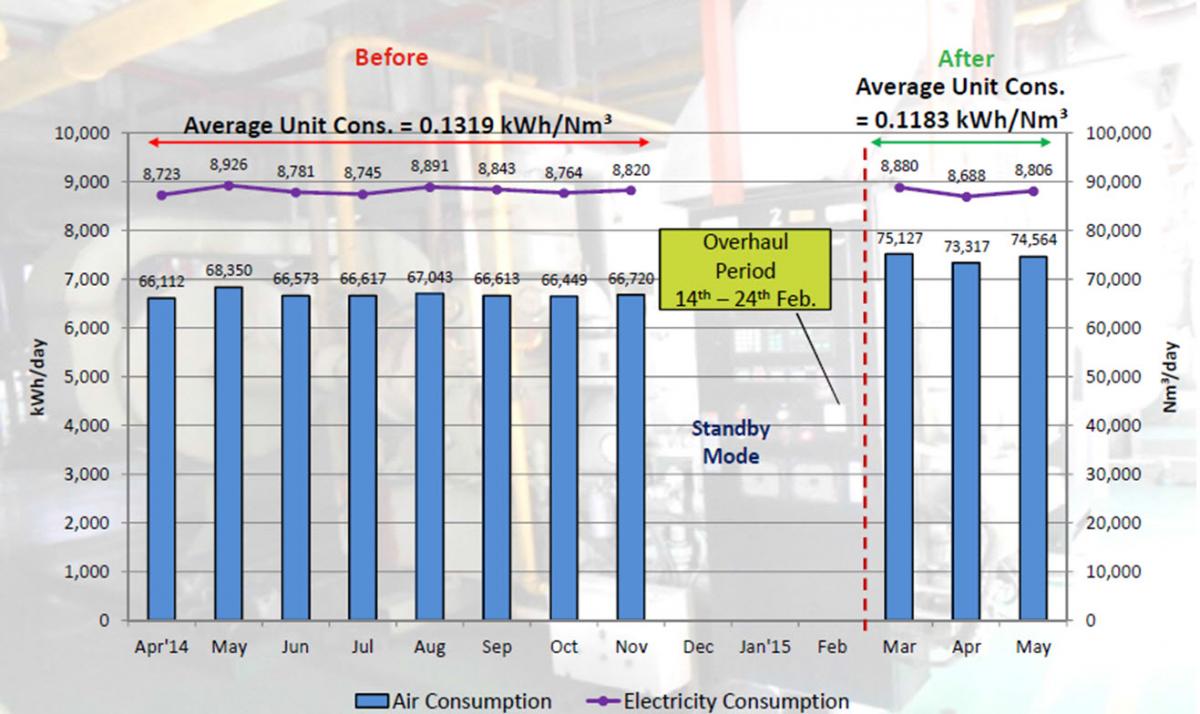 Figure 5: After overhaul the air compressors performed much better

One of the facility's compressors was identified as a low performer but it was too expensive to repair, with estimates totaling \$154,000.  Since the cost of a new compressor was \$186,000 the decision was made to replace the unit.  The new air compressor is 16 percent more efficient that the old unit and therefore saves energy per unit output.  This compressor saves an estimated 64,565 kWh per month worth \$65,600 per year in savings.  Simple payback on the complete project costs is 3.1 years.

Using the energy management system the company was able to track the resulting savings from energy conservation measures. 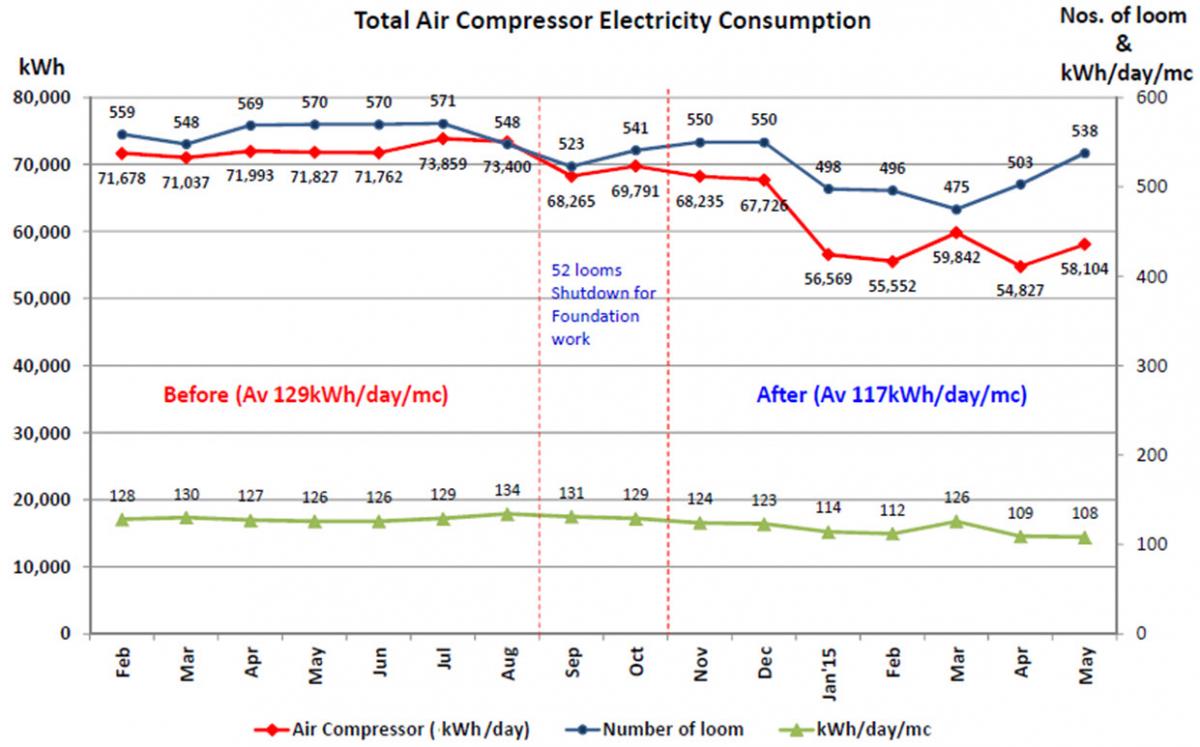 An important part of this successful project was the initial tracking of the plant electricity costs through the energy management system.  Both the reduction of compressed air consumption and optimization of the air compressors reduced the overall compressed air system costs significantly.  This company has not only reduced their electricity costs but has also experienced increased product output volumes due to the replacement of inefficient and outdated equipment.  These improvements increase plant profitability and reduce production costs.

Energy efficiency measures have reduced the consumption of compressed air by 64,800 m3/day and increased compressor system efficiency, resulting in 5,532,800 kWh per year in decreased energy consumption leading to annual savings of \$468,000 per year.  This calculates to 21% savings.