Keeping Compressed Air Leaks to a Minimum at Petrochemical Plants


Good afternoon. It’s been some time since we last visited. Please refresh our readers on Petro Chemical Energy, Inc.

What makes a compressed air leak survey at a petrochemical plant different than a survey at other manufacturing plants?

In terms of compressed air systems, it’s not unusual to see a plant with 10 to 15 air compressors, each of which is rated to provide 3,000 to 4,000 scfm of air. The air is used for everything from moving product, to powering pneumatic tools, pumps, and fans, to cleaning. There are easily 1,500 pneumatic control valves at a single plant.

How much compressed air is lost to leakage at these types of plants?

Normally, about 30% is lost to leakage. A plant can usually get that down to 15 to 18 percent with a good compressed air leak detection and repair program.

Some plants are more diligent about fixing compressed air leaks than others. We have a plant in Texas we survey every year. They’ve gotten their leaks down to about 8%, but that's unheard of in this industry. It took them five years to get to that level, but it can be done. It takes a very rigorous leak detection and repair program to stay on top of leaks. The reality, however, is most plants don’t have the personnel to dedicate to it.

Why are there so many compressed air leaks at petrochemical plants?

The size of a plant and the amount of compressed air used has a lot to do with it. More air means more leaks. Plus, many of these plants are more than 100 years old.

You can also imagine there are a lot of places where leaks occur. Some of the biggest offenders are loose tubing connections, piping connections, air traps, leaky regulators, holes in corroded pipes, and valve packings. And then you have open lines since valves are left partially open, or all the way open.

You run into all kinds of situations. For example, it’s very easy for an air trap to become clogged with debris and no longer work. An operator will come by and open the valve to bypass the air trap, allowing air to blow directly to atmosphere as a stopgap measure until the trap is to be cleaned a short time later. But the operator can easily forget to close the valve later because it’s very hard to hear the air leak with all the background noise at these plants.

We’ll gather basic information before we start, such as the number of air compressors in use, the processes using the air, and areas the plant needs us to focus on. We also ensure the compressed air system is operating normally. That sounds basic, but we don’t want to do a survey only to find out later one or more of the air compressors were shut down.

We’ll then map out the route based on certain units of the plant identified, such as the powerhouse where most air compressors are located, or the boiler house, or the coker, or a specific process, etc. At that point, the surveyor will establish an inspection zone and walk up and down different pathways and structures to perform the survey. We’re talking miles of pathways and 15-story structures that need to be surveyed. 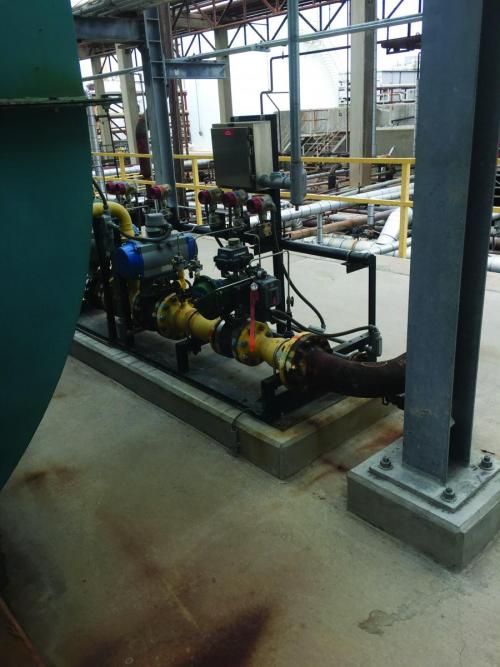 A compressed air leak detection survey can take as many 12 weeks to complete. Engineering tape wrapped around leaks, such as the one shown here, makes them easy to spot for repair.

Wow! That’s a lot of territory to cover. How long does it take to complete a compressed air leak survey?

At smaller plants we normally complete a survey in about a week. At a larger refinery or petrochemical plant it will take upwards of 12 weeks to do get the job done. That’s just one person doing the survey, but we normally have two people survey a plant. One of them is a trainee because we need them to do on-the-job training.

We know the process involves the use of ultrasonic leak detectors, but help us understand how it’s used.

An ultrasonic leak detector operates on sound and picks up noise the human ear can’t hear. I like to tell people to think of it as a metal detector.

A surveyor will listen to the detector as it makes a hissing sound. Since ultrasound is a short wave signal it means the sound level will be loudest at the leak site. As such, the closer the surveyor gets to a leak, the louder the sound.

This is where experience comes in. Many plants have found they can’t simply give an ultrasonic gun to one of their staff members, train him for a week, and have him go out and do a proper job. It just doesn’t work that way. It takes us roughly a year to train our people to go out and do a proper air leak survey.

Why does a compressed air leak survey require so much experience?

The surveyor needs to know what to listen and what to look for, especially with the high level of noise in these environments.

For example, an experienced surveyor will hear a leak, zero in on it, and then look up to see where it’s coming from and say, “Okay. That’s an air regulator right there and it’s the source of the leak.” Or, he might say, “That’s a steam leak. I’ve seen that before and it’s not what I’m looking for,” and move on.

Unless you’re really careful you will end up with a lot of false readings. The ultrasonic leak detector doesn’t know the difference between an air leak and a steam leak. It will also pick up multiple leaks at the same time, whether it’s compressed air, steam or another type of compressed gas. This is where it gets into measuring the size of the leaks, which requires a combination of knowledge and methodology.

How does your team measure compressed air leaks?

Let me tell you what many others do first. Many say you should measure the leak based on the level of decibels the leak is putting out. And that’s fine, but not at a petrochemical plant because you’re going to get a lot of false readings with the constant background noise.

Many also suggest the use of a caliper to measure the diameter of the orifice of a leak to determine the CFM lost for that specific leak. The total number of leaks is then added up to determine the total CFM of air leakage. A universal mathematical formula is then used to estimate annual CFM and dollar loss.

Using a caliper for measuring isn’t realistic for the types of surveys we do, however. If we used a caliper to measure 2,000 leaks at a single plant it would take us a year to complete the survey.

So instead of using a caliper, we physically feel the leak to assess the discharge pressure of a leak. To do this, our surveyor puts the back of his hand in the path of the leak and measures the approximate length of the air plume. We then assign a value to it in terms of small, medium, or large and assign a plus or minus factor to each value. We’ll also note the rough size of orifice causing the leak.

Since your method of measurement isn’t 100% scientific how accurate is it?

The CFM loss we assign to leaks is very conservative based on our experience with leaks. We know we can confidently tell our customers you’re losing a certain amount of compressed air at the very least.

Our approach also takes into account the sensitivity of the ultrasonic leak detector, which again, can detect leaks the human ear can’t pick up. If we hear a leak and then put our hand to it and can’t feel it, it’s not worth fixing it. The plant would rather focus on larger leaks that allow them to more effectively address the loss in pressure to avoid lost production, or the need to invest in additional air compressors and related equipment.

To put it in perspective, you might have a compressed air leak you can’t feel in some cases. But, in other cases, you can have a leak large enough to blow the hardhat off an operator’s head, which has happened.

That brings safety to mind. What are the safety training and precautions involved?

For starters, each of our surveyors takes literally 55 different safety lessons at our facility before he goes out on a job. The surveyor also goes through every plant’s site-specific training program before stepping foot in the plant, which can take anywhere from a few hours to an entire week.

We also adhere to ongoing training. This includes daily “toolbox meetings” where we cover any number of safety topics. We also require our surveyors to take at least one online safety class every month. Additionally, our people are outfitted with all of the latest personal protective equipment, such as fire-retardant clothing and precisely calibrated gas monitors. This is all in addition to on-the-job training.

When working in a petrochemical plant it’s vitally important for surveyors to be aware of their surroundings and what's happening at all times.

What does a surveyor do after he’s identified a compressed air leak?

It depends on the type of leak. We recommend having a plant operator work with us when we survey the plant. That way, he can immediately fix leaks that only take a few minutes or less to fix. It’s relatively easy to fix as many as 30% of the leaks during the course of a single survey.

If the leak can’t be immediately fixed, we’ll place an aluminum tag stamped with an identification number at the spot of the leak. We’ll also wrap a piece of fluorescent engineering tape around the tag so it can be easily identified. The maintenance team will then come back and fix leaks as soon as they can get to them. Sometimes, the plant might choose to fix a leak during routine shutdowns of certain processing areas. 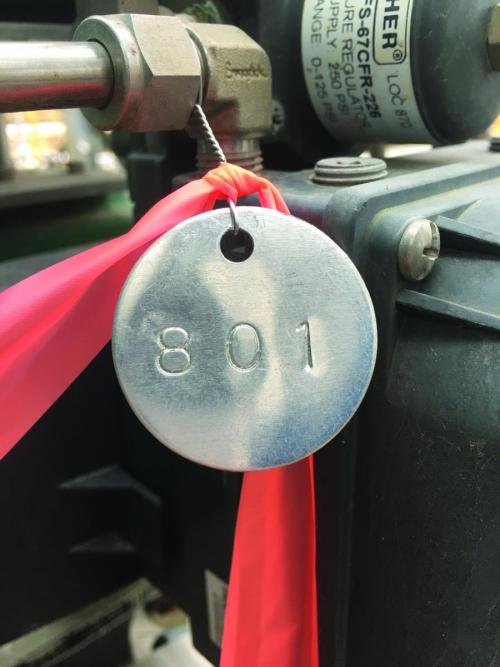 A metal tag with a stamped number identifies the source of a compressed air leak.

We provide the plant with a report in the form of an Excel spreadsheet. It includes the location and description of all leaks, as well as the rough size of the leak, the plume length and the estimated CFM loss. We’ll also estimate the total dollar loss annually.

While a survey has a start and finish, every plant knows they need to survey their plant for leaks regularly whether that means doing it quarterly, twice per year, or annually. It depends on any number of factors, such as the condition of their piping, or whether the plant might have a higher-than-normal caustic environment.

Finding and fixing leaks at petrochemical plants is an ongoing battle and probably more so than most manufacturing plants. The goal is to keep them to a minimum.

Thank you for sharing more insights on this topic.