In early 2003, Roxane Laboratories, Inc., a subsidiary of Boehringer Ingelheim Corporation located in Columbus, Ohio, was charged with planning and implementing a major plant expansion to take place over the following five years. As plans progressed, the project team found that one of the most significant limitations to this expansion was the inability to increase air flow to the plant with their existing compressors. When plant personnel imposed a false additional demand on the system, the compressed air system could not hold the plant pressure, even with all the units running.

Air Power USA’s findings concluded that the basic piping configuration and sizing was limiting the ability of the system to deliver any additional air from the compressor room to the plant. See Figure 1. 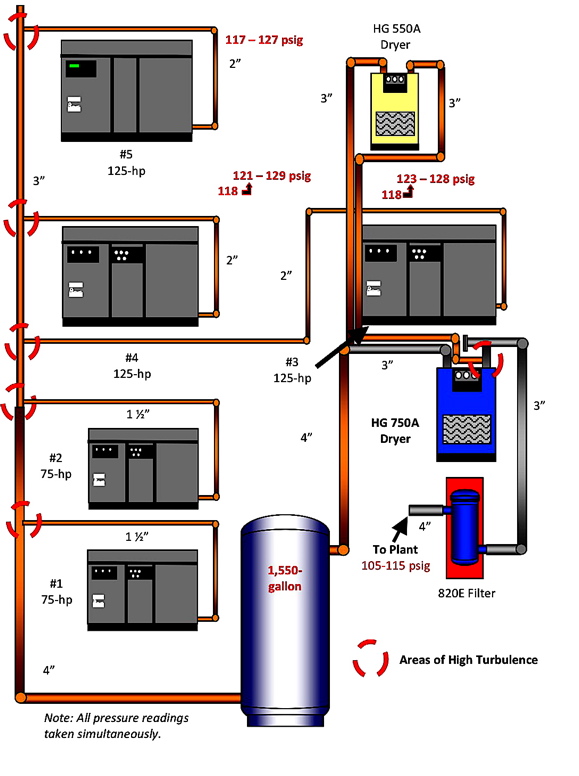 Roxane Laboratories contracted with Air Power USA to conduct a complete review and audit of their system including all the production areas on the demand side. They also requested a detailed plan to double the effective size of the air system and produce “a world class” compressed air system which reflects the high quality standards of the company.

Air delivered to the system was measured and logged by a heated wire insertion flowmeter. Data was recorded and collected for seven days to capture all operating conditions. The plant runs 24 hours a day, 7 days a week for 8,760 hours per year. There are many separate operations in production that are very well controlled. The flowmeter ranged from 650 to 1,250 scfm sustained peak with an average of 725 scfm.

The air compressors were equipped with 2-step, or load/no-load capacity controls, which operate on a 10 psig band (nominal 115-125 psig). The unit is at full load as the pressure (and input kW) increase along the band. At the unload point, the compressor inlet valve closes and the unit input kW falls to idle (24 kW).

The compressors capacity control system was set up in a typical cascade system as shown in Figure 2. Reviewing the schematic in Figure 1, the units on line are #3, #4 and #5.

Figures 3 and 4 reveal trended kW measurement of three 125-hp units at Roxane Laboratories. All readings were taken simultaneously and are shown in two sets for clarity; however, you will note that Unit #5 is always at base load, and Unit #3 short cycles in trim. Unit #4 tries to load in but cannot forcing Unit #3 to turn off; Unit #4 then takes over trim and short cycles.

The charts show the basic operation of the main compressed air supply units when running together. 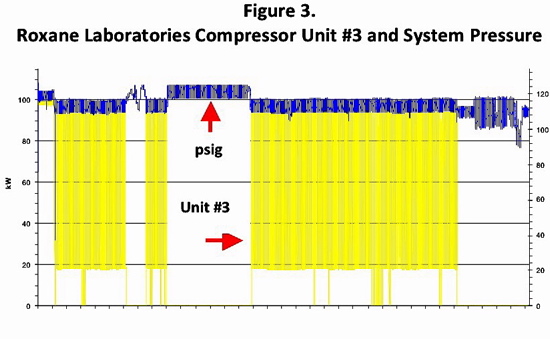 • At any given time, only Unit #5 is on at full load during normal demand

• A third unit, #4, called on due to falling plant pressure, comes on and goes off immediately

• Regardless of which unit was short cycling, it was only loaded about 30% of the time and operated at about 46% of full load input kW average.

Air Power USA identified the piping size (2”copper) discharge line to a 3” copper header. Although the resistance to flow of copper is less than black iron, the very high velocities (49 fps) in the 3” header trying to handle the load from each compressor, combined with the “crossing tee” configuration (Figure 5) creates very erratic and significant pressure spikes causing the extreme short cycling. This short cycling was a principle cause of the premature airend, motor, and cooler problems. 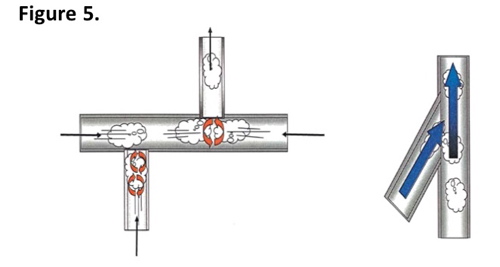 The other major problem that existed in the air supply was significant condensate carryover past the primary dryers where it had to be handled in a secondary trap area requiring significant maintenance time to successfully protect the production area.

Air Power USA felt the primary problem here again was configuration as the piping going from a 4” copper line in and out of a 1,550-gallon receiver split into two 3” lines going to 550 scfm and 750 scfm rated non-cycling refrigerated dryers. The “crossing tee” where the 550 scfm dryer tried t

After reviewing the final report, Roxane Laboratories engineering decided to proceed to develop and implement the new ‘world class” compressed air system. Air Power USA was retained to assist the plant engineers in project management with particular attention to the compressors and supporting equipment including the piping material, sizing and configuration. URS Consultants of Columbus, Ohio was the mechanical engineering contractor. Joint meetings were held and following is an abbreviated list of specifications.

• All components and total configuration to be sized to efficiently handle 2,000 scfm flow at a discharge pressure as low as 85 psig.

The projected near term new demand profile at 105 psig discharge pressure will be:

The projected maximum demand over the 5-year expansion will be:

These numbers were generated by the project teams operating model. After the system is fully reconfigured and stabilized, the plant will actively pursue lowering both the discharge (saving input energy) and the system pressure (reducing the flow demand) until they identify the optimum operating system pressure for maximum productivity and quality.

Central air management system operating from a single sensing point to hold all units at full load except one at part load, all others off. The operating band to be ±2 psig with a maximum pressure loss from the compressor discharge to the distribution piping entry point of 5 psid

Working closely with Roxane Laboratories plant engineering and maintenance personnel, a complete matrix was developed with the four leading manufacturers of oil-free, 2-stage, rotary screw compressors. The following is a brief synopsis of the operating energy cost analysis:

After considering the other benefits such as these listed below, the team selected the 250-hp size units.

The New System is Complete

The project team developed the final overall layout and design reflected in Figure 7 in 2004 and implementation was underway. Some key points to observe as shown on this schematic are: 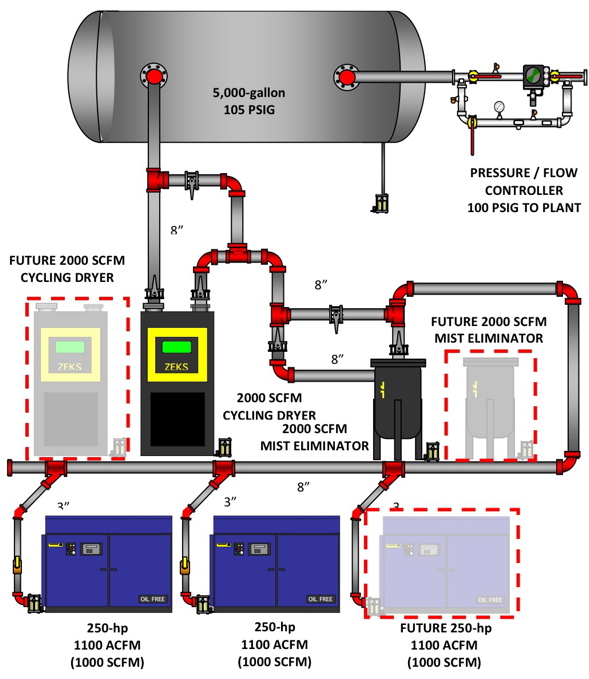 However, the second, or trim, unit runs routinely during production which triggers a need for the third compressor to continue the N+1 reliability factor.

ity of all the selected equipment. The system was designed to handle a maximum of 2,200 acfm (2,000 scfm) without any major changes. Today, it is running about 300-500 scfm below that.

If it ever gets to the point where a third unit is needed routinely, it will still perform well but in a diminishing manner. If the growth increases to where the three units have to run together most of the time (2,800 to 3,000 scfm), then consideration will be given to a complete revaluation of the entire supply and demand system as to pipe sizing, storage, regulation of flow, dryer, primary air, etc.

Overall, this story is why it is best to do the audit or review BEFORE you make significant changes or expansions to the air system. A job well done – and still paying off 5 years later.