Air compressors need to be matched to load effectively and efficiently. If the air compressors’ range of variation can’t be matched to the system variation, instability and/or inefficiency can result. This article discusses the problem when it isn’t matched, which is called “control gap” and what to do to avoid it. 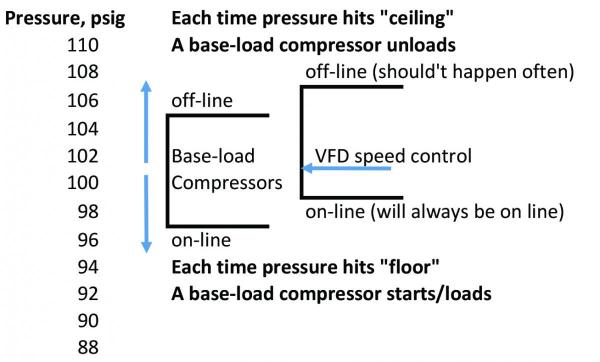 A Close Look at the Control Gap Problem

Now that you know the proper way to set a VFD air compressor’s control pressure in a system, let’s discuss the problem as it relates to screw air compressors. What happens when you have the right pressure settings, but the relative sizes of the air compressors makes it impossible to control to those settings?

To explain, let’s call the capacity of each air compressor X. Let’s assume the VFD had a generous 70% turndown, matching demand from 0.3 X to 1.0 X demand. Assume demand went from just below the capacity of the VFD to just above it, from 0.9 X to 1.1 X. The VFD would go to maximum speed, and pressure would drop. The base-load air compressor would start and load. Supply would be the sum of the two air compressors, or 2.0 X. Remember demand is 1.1 X.

Pressure would rise quickly, the VFD would try to spin back to accommodate that (but still making air at minimum speed, 0.3 X). Assuming storage is sufficient and VFD response speed is fast enough supply would drop to 1.3 X and demand 1.1 X by the time pressure was at the top end of the VFD’s control range. Pressure would continue to rise. Then, the base-load air compressor would have to unload. Now supply is 0.3 X and demand is still 1.1 X, so the pressure would drop very quickly. The VFD would try to spin up and catch demand. Even if storage was large enough and the VFD fast enough, pressure would still fall below its setpoint because demand is more than supply still, 1.1 X demand versus 1.0 X supply. The base-load air compressor would load up again.

This cycle would repeat over and over again until demand was below the VFD’s capacity or above the base-load plus minimum VFD speed capacity. In the middle, this “dead band” or “no-man’s land,” is where the control gap problem occurs.

There is a way to tune around control gap. Certainly, the best way is to make the VFD speed range more than the base-load air compressor size (in cfm), 1.5 X as I recommended above. Also, use a targeting algorithm. It will keep the VFD moving back and forth in its speed range all the time.

There is also the alternative of merely putting the VFD in “trim” or the No. 2 position by “cascade” control.  Unfortunately, this would not be an efficient and effective mode if demand went below 1.0 X often, which in most small- to medium-sized plants it does.

Let’s finally get to the solution! Here are some recommendations.

A case study illustrates the problem. In this case, an actual 75 hp air compressor system was improved by the addition of a 75 hp VFD air compressor and then fell into a worse efficiency condition than before, all because of improper controls. After the system was retro-commissioned, however, control gap was managed. This was an actual project from 2012.

Seven years later, I performed an audit and discovered the inevitable. Demand had crept up and the second air compressor was needed. It had been just turned on in manual control, no controls adjustments made or automation added. The result was: 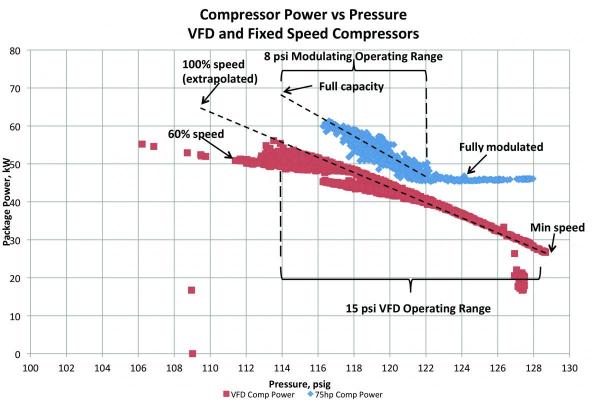 For this project, I could have recommended either a larger VFD air compressor or a small base-load air compressor, and a target sequencer, but the air compressors were fairly new, and the utility’s incentive already paid for a VFD. I wanted to still use these air compressors. In order to tune around this control gap, root problems had to be solved:

Per my specification, the supplier modified the settings for the VFD proportional range to as tight as possible. I liked the fact that it was pure proportional demand, making it very predictable. Next, they supplied a master controller to manage the setpoint of the VFD and control the fixed speed unit. Finally, they adjusted controls, including the local modulation controls to be above the range of the automatic controls.

The control gap was between about 320 and 430 scfm. See Figure 3. We were able to tune the system to be stable in the control gap by the following:

The above settings would trim the VFD when demand was below 320 scfm. However, it would also base-load the fixed speed with the VFD trimming at demands above that, creating a potential control gap between 320 and 420 scfm, where the VFD air compressor couldn’t spin down far enough. See Figure 3. In spite of that small control gap, we were able to commission the system to only have a maximum load-unload cycle of four minutes and very low unloaded losses. 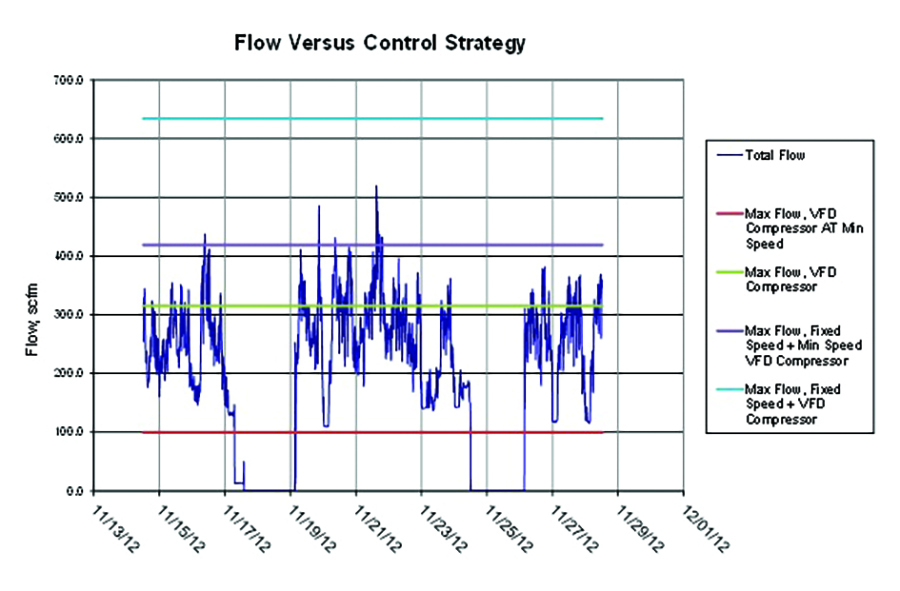 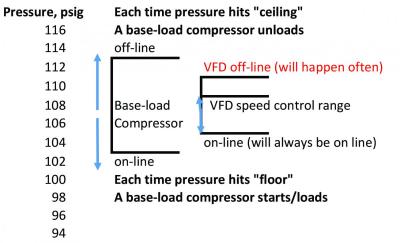 Finally, having a retro-commissioning (or “tune-up) study and project performed and on any VFD/fixed speed air compressor system will probably result in energy savings and reliability improvements. I strongly recommend having a qualified independent professional conduct one.