The design of wastewater treatment plants is changing, and it has something to do with LEGO® bricks. More specifically, it has to do with how large and complex LEGO structures are built. If you follow the instructions carefully, you build module after module, eventually piecing them together to create a fully functional and cohesive unit.

According to Craig Correia, Head of Process Automation at Festo Corporation, a similar approach is being adopted for the design of wastewater treatment facilities, and it has several advantages for both the manufacturer and the end user.

“OEMs are already modularizing. That’s where the trend is being pushed from,” Correia explained in a recent interview. “They’d rather build fifteen of the same skid each year than fifteen different skids. The advantage for the OEM is that it is repeatable, efficient and more profitable.”

For the plant personnel, the advantage is scalability. Instead of constructing a new plant, a facility designed with small, independent units can increase its production capacity by adding more modules. This approach can be used for wastewater facilities, along with production facilities in the pharmaceutical, food processing, fine chemical and beverage industries. 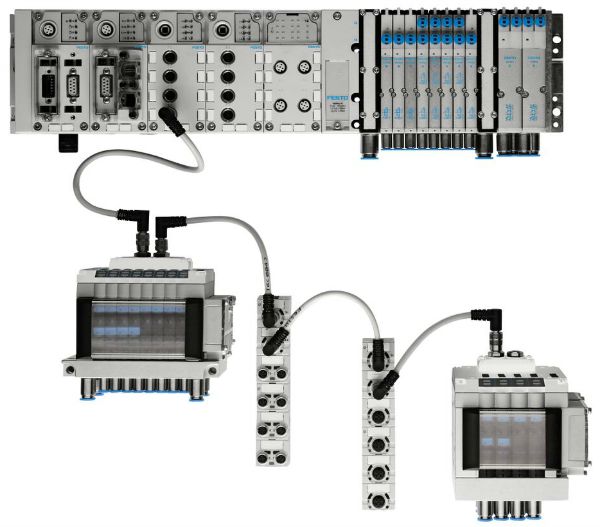 In this image, two modules are added to a Festo CPX controller through plug-and-play connection.

During our conversation, Correia discussed the advantages of modularization in detail, outlining how the approach can help better monitor compressed air use. He also provided several recommendations for designing wastewater treatment plants to ensure they use compressed air as efficiently as possible.

When a municipality decides to design and build a wastewater treatment plant (WWTP), there is typically a standard process. The city puts the project up for bid, evaluates the proposals, and selects a civil engineering firm to perform the work. The firm then designs the plant from the ground up. According to Correia, about 70 percent of these projects incorporate electrical systems to control the valving.

The remaining 30 percent of facilities use pneumatic technology. In those projects, firms like Evoqua, Pall and GE Water build skids that use compressed air as the working medium to control and automate the influent and effluent of the WWTP. Low-pressure compressed air (at least 60 psi or 4 bar) is used throughout the instrumentation, valving, sensors, and even the filter membranes. Correia mentioned there are more than 70 of these OEMs across the U.S. making filtration skids for the wastewater industry, and they are the companies currently pushing modularization. 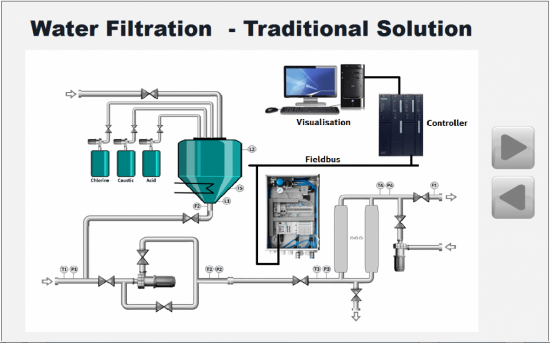 For these OEMs, modular skid design is a no-brainer, because it enables them to make serial products, or the same product in high volumes. Making the same product is more efficient and, consequently, more lucrative than customizing every skid.

“If [the OEMs] are making a system for Cranberry Township one week, and the next week they’re working with someone in Mexico, all the requirements change,” Correia said. “If they have to re-design it every time, they are losing some of their efficiencies as a skid-builder. They want to standardize instead of re-designing every time.”

When a company can make smaller, standard skids, its drawings become more repeatable. The company’s labor also becomes more comfortable with the equipment, helping them to piece the skids together more efficiently.

Modular design helps the end users in a number of ways as well. Aside from potentially driving down costs and enabling quicker turnaround, a modular approach enables greater flexibility for the facility. 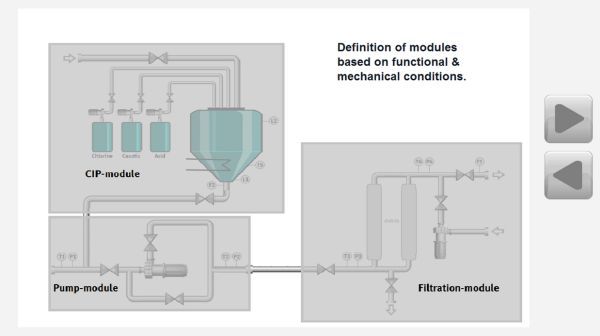 Modularization of the mechanical and functional tasks of a water filtration plant.

In the context of a WWTP, OEMs manufacture skids for ultraviolet (UV) light treatment, membrane filtration, reverse osmosis (RO), and chemical dosing. With a modular design, the skids can be clustered together, or sequenced in a series, to achieve the desired effects. Additional units can be added, or existing ones shut down, as determined by the facility’s needs.

If the facility has the programming expertise on-site, it can also leverage the smaller modules to better monitor skid performance — including compressed air usage. According to Correia, one of the reasons that companies don’t run diagnostics across their entire system is due to bandwidth issues. The more information you collect across the system, the more there is slowing the top-level controller down.

“If each of these [skids] is locally controlled — which is feasible — meaning that each skid has its own controller, its own valve terminal, its own electrical terminal, they can cross-communicate and push the communication to a higher level controller, or SCADA system,” Correia commented. “You can perform diagnostics at each module with a decentralized intelligent valve and electrical terminal and only push up alerts when something falls out of the predefined range. You should have a flow meter locally just monitoring compressed air. If the volume of air spikes up at that module, you can go evaluate it.” 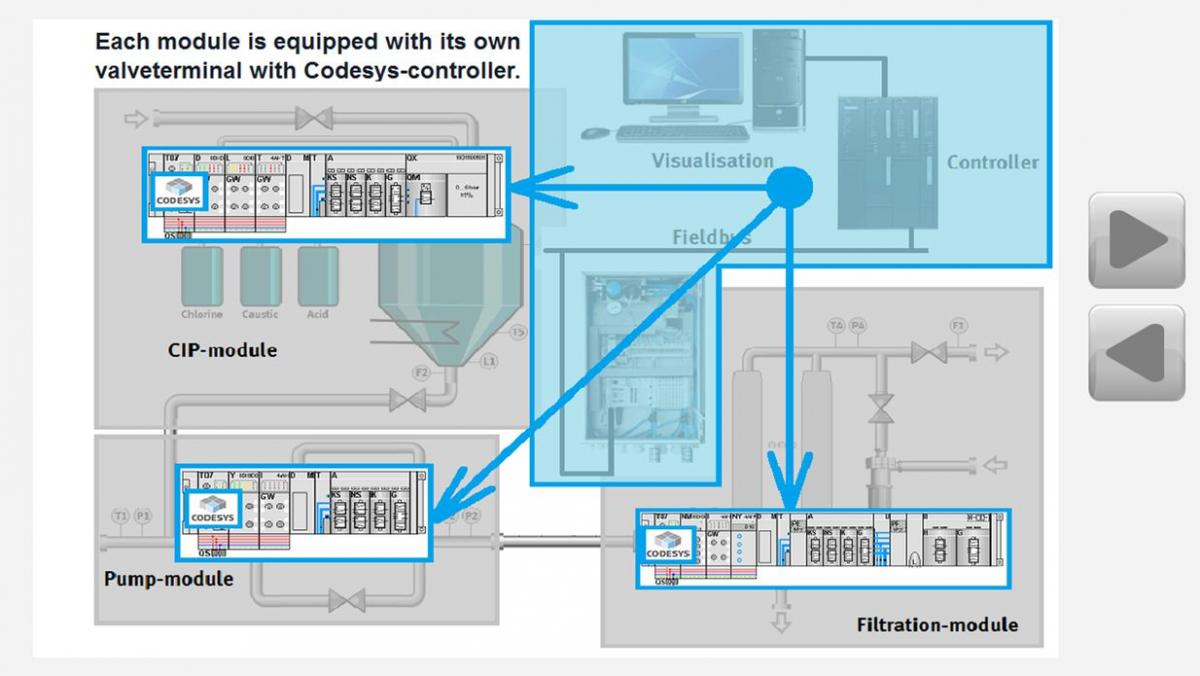 Modularization of the automation tasks of a water filtration plant. Click here to enlarge.

Not only would this setup help reduce network congestion, but the decentralized concept of monitoring air consumption would also help diagnose issues better than using one flow meter at the front end of the whole wastewater treatment process.

“We might see an increase in air consumption — but where?” Correia asked. “The system has a series of modules for RO, UV, membrane filtration and chemical dosing, but where is the air lost? By using a decentralized diagnostic approach at each module, you can quickly pinpoint your compressed air use.”

During our discussion, Correia mentioned automation components would not be more expensive for this approach. The cost — and the challenge — would come with the programming. A controls engineer would have to write more programs. If there were eight modules, you might need eight different programs feeding up to a ninth supervisory one, as opposed to one main program controlling eight skids with no intelligence.

Even facilities without in-house programming capabilities can monitor their compressed air usage through modular skids. Festo provides valving and process control terminals for these skids, along with the automation software. The software offers the biggest benefit for end users and OEMs.

According to Correia, Festo technology enables filtration skid manufacturers to run remote diagnostics on any skid they manufacture in real time.

“[OEMs] can install this in a municipality or a food production plant or a winery in California — doesn’t matter where — and in real time they can see what is happening in that skid,” Correia said. “If a customer calls and reports the effluent is not meeting a particular standard, they can go into the Festo system remotely and see the last forty diagnostic events, allowing them to troubleshoot immediately and remotely.” 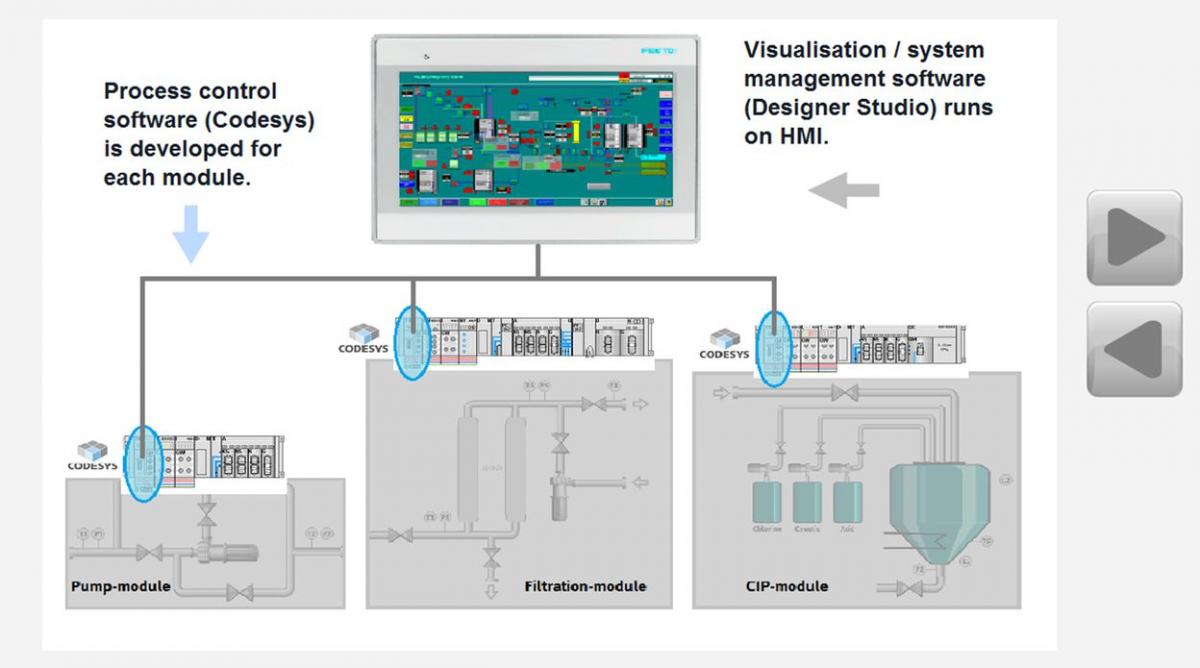 In a traditional system, technicians may receive sensory feedback, but it would not specify where the problem occurred. This scenario leaves a lot to be desired, as the plant technician would have to troubleshoot every subsystem of the skid. According to Correia, the Festo valves provide this information — and pinpoint the problem.

“The valves can perform diagnostics in addition to getting sensory feedback from the skids,” Correia explained. “It can tell you if there is a broken valve, a short circuit, a blown fuse, a broken wire, a voltage overload, and, in real time, display this information first on a touch screen, but also on a higher level SCADA system.”

The information provided from the remote diagnostics is invaluable for both the end user and the OEM responsible for servicing the skid. The capability to remotely diagnose issues enables the OEM to service a customer across the country without having to bring in a third-party technician or fly someone to the site.

“We don’t see companies using this information enough,” Correia said. “It gives everybody a little more peace of mind.”

Designing with Compressed Air in Mind

When it comes to using compressed air efficiently, Correia provided several recommendations for WWTP skid design. He mentioned that the safety factor for reliability is too high across the industry, especially for municipal applications. Large WWTPs may have controls engineers who understand programming and automation, but the smaller towns typically lack those resources.

“Too many systems are designed from copy and paste to save time or because bigger feels safer, but the long-term costs are not being considered,” Correia explained. “Both engineers and designers often oversize pilots valves, actuators, and tubing diameters to save design time or for comfort level. It might only add \$3,000 in component costs at the initial build, but I have piece of mind that it will work. But guess what? Every cycle of that valve consumes and exhausts excess compressed air. There needs to be more consideration about life-cycle costs for the decades the plant will be in operation.” 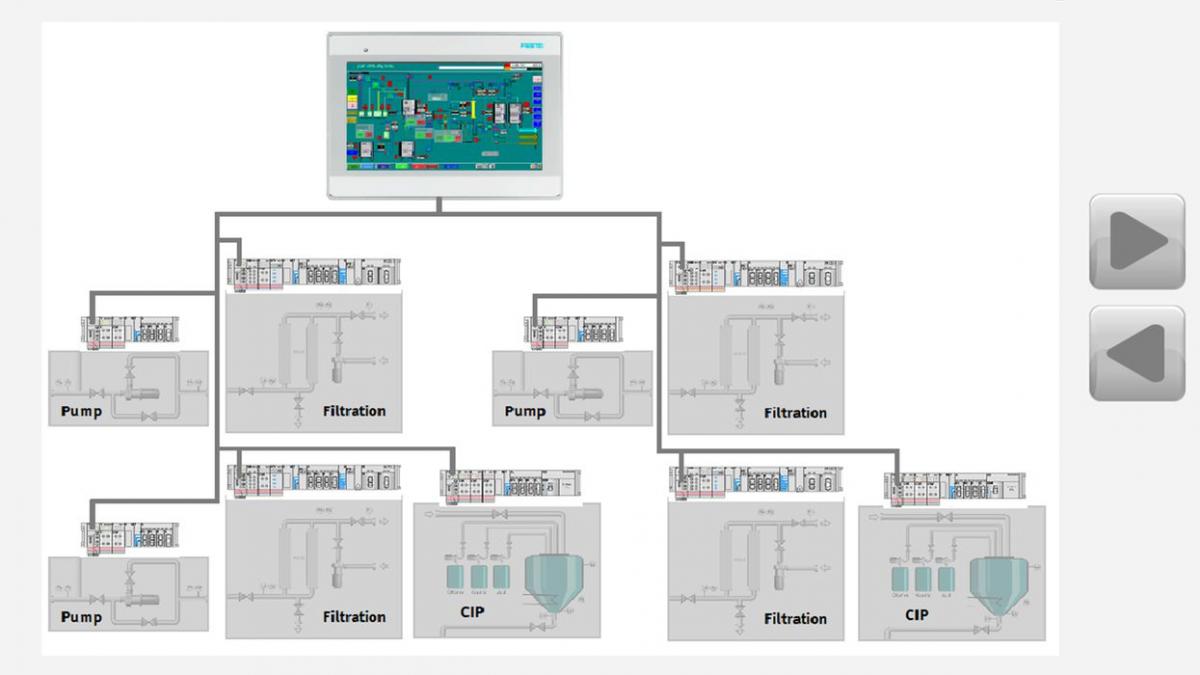 By adding more modules, the system can be expanded. Click here to enlarge.

Use a Flow Meter — No Matter What

Perhaps the most important thing to do when designing or installing pneumatically controlled WWTP skids is to incorporate a flow meter. The old motto of “You can’t monitor what you don’t measure” applies particularly well to pneumatic controls.

“When we talk about the efficiencies of compressed air, one thing we tell these OEMs to do — and we tell everyone to do this — is they should be putting a flow meter on the front end of their system,” Correia said. “Everybody typically measures pressure, but they aren’t measuring flow. Flow is equally as important because you need to have volume. You need to fill these actuators at that pressure.”

According to Correia, compressed air flow meters have really come down in cost over the last five years. Festo highly encourages its customers to put them in place on every skid for two reasons: (1) They provide traceable energy metrics, and (2) Flow monitoring provides great preventative diagnostics. 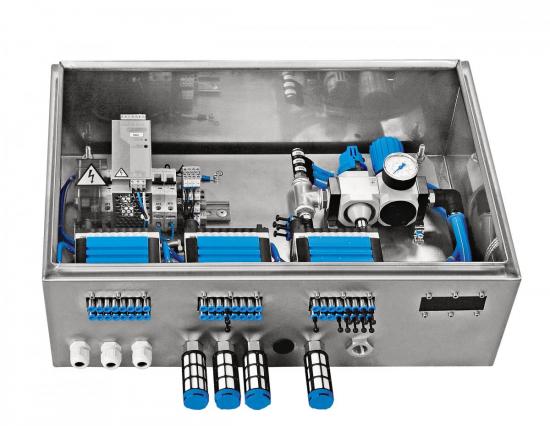 By installing a flow meter on a filtration skid, you can track exactly how much compressed air it consumes. That is huge because it provides a baseline for comparison. OEMs can take that number and push their engineering teams to improve it. WWTP personnel can take those same metrics and use it to compare different skids, enabling them to select the most energy-efficient one.

“If you want to operate in the industrial space, big companies all have energy conservation projects,” Correia explained. “If you are bidding and you can say a skid is 20 percent more efficient than the one we built last year, that procurement person or that engineer is going to feel better about buying that skid.”

Flow meters also help provide preventative diagnostics. For a hypothetical example, let’s say one of these OEMs installs a skid in a small municipality. After some consistent monitoring, they determine it consumes about 16 liters of air every hour in order to run smoothly. If one day, perhaps a month down the road, they noticed it was consuming 80 liters of compressed air every hour, they would know immediately that there was a leak.

LEGO models are great because they are simple enough for children to enjoy, yet complex enough for an adult to appreciate. Obviously, designing a WWTP is exceedingly more complex than piecing together a set of LEGO bricks, but the same modular concept can help bring scalability and flexibility to an industrial facility. By following best practices, some of which were laid out in this article, you can also make sure those modular skids use compressed air efficiently, and monitor compressed air usage as a preventative diagnostic measure.