CalPortland® Continues to Walk the Walk in Sustainability


There are many companies who say they are leaders in environmental protection. And then there are many like CalPortland® that back it up time and again.

A major producer of cement and building materials, CalPortland’s energy management efforts have reduced the company’s overall energy intensity by 17.5% since 2003, avoiding \$149 million in unnecessary energy costs – and over 3.3 million metric tons of Greenhouse Gas (GHG) emissions. In 2020, the company achieved what no other U.S. Industrial company has: It earned the ENERGY STAR® Partner of the Year Award for the 16th consecutive year.

For Steve Coppinger, CalPortland Vice President of Engineering Services, and Bill Jerald, CalPortland Chief Energy Engineer, sustainability at the company is considered a given.

“We don’t just talk about sustainability; we’re really doing something about it,” said Coppinger, noting the great pride the company takes in its achievements. “We walk the walk. And you can see that we’re doing something because we’re recognized for it. We’re believers in it,” he said. 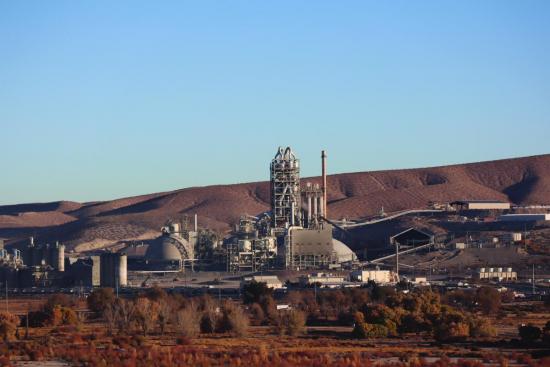 CalPortland operations, such as the company’s cement plant in Oro Grande, California, have been long recognized for success in sustainability.

Headquartered in Glendora, California, CalPortland Company (www.calportland.com) produces cement, ready-mixed concrete, aggregates, concrete products and asphalt in the western United States and Canada. In all, it employs 3,000 people at 150 facilities.

Its three cement operations in California and Arizona use a complex process that takes mined material and grinds it into raw meal. The meal is then heated in large kilns with temperatures reaching 2,700°F (1,482°C) in order to produce cement, which is the main ingredient used to make concrete. CalPortland’s 76 ready mix plants produce ready-mixed concrete based on local customers’ specifications and transport it to each site with its fleet of 2,500 trucks with 118 of those trucks being CNG-fueled trucks. CalPortland has three in-house CNG stations fueling the ready mix fleet and 24 newly converted CNG cement-bulk hauling trucks. In addition to cement and ready mix plants, it operates cement terminals, as well as asphalt plants and aggregate mines.

The company, founded in 1891, has carved out a leadership position in the industry with its strong commitment to quality, customer service, technical excellence and safety. It has also established itself as a proven leader of energy conservation and environmental stewardship for decades. A main reason for the company’s strong commitment to sustainability, said Coppinger, is because it cares.

“We want to be responsible citizens,” he said. “We have industrial facilities in communities where we live and work and we want to make sure we’re serving as leaders in helping the environment and demonstrating what we do.”

Producing cement is an energy-intensive business covering multiple aspects of materials processing, including mining, crushing, grinding, pyro-processing, conveying and pumping. CalPortland spends over \$126 million per year on energy with costs equally divided between electricity, diesel fuel and fuel for its kilns, which includes natural gas, coal and coke.

“The cement process represents about 40% of our variable costs. Obviously, we’re trying to reduce our costs and when we can be more efficient and produce fewer emissions it’s a good thing that helps everyone,” Coppinger said.

The electrical load at a CalPortland cement plant can reach 35 MW, consuming as much as 205 million kilowatt hours of electricity per year. Jerald said compressed air is considered a major consumer of energy, and more importantly, represents an excellent opportunity for low-cost improvements in energy. He also said the company’s focus on compressed air has changed considerably since he joined the company 27 years ago.

“It’s a night-and-day difference. Now, we look at compressed air holistically and it’s to the point where it’s ingrained as far as people thinking about it and how we can use it efficiently,” Jerald said.

“In the past, an employee might hear a compressed air leak walk right by it, saying, ‘It’s just a compressed air leak. It’s no big deal. That’s normal.’ But with proper awareness and training, it’s second nature for people in that situation to say, ‘Whoa. That’s a leak. We need to tag it and address it. It’s costing us money.’ When we see something that looks unsafe, it’s second nature for us to correct it. We have the same type of thinking with energy.”

CalPortland owes much of its success with compressed air efficiency and sustainability to an organized approach and a top-down commitment to it, said both Jerald and Coppinger.

Energy use and consumption at the company is regularly evaluated and action plans formulated and consistently updated on a plant-by-plant and regional basis. The plant engineer at each cement plant, for example, serves as both plant engineer and energy manager. Each plant also has a cross-functional energy team consisting of 10 to 15 people with a diverse range of experience and expertise, ranging from Information Technology to marketing and more. The team typically meets on a weekly or monthly basis to evaluate the operation’s energy data to gauge overall energy performance. Quarterly reviews are then held locally and at the corporate level to share information and ideas.

“How much energy have we consumed? Are we doing better or worse than our goals? How is the kiln doing? How are the air compressors doing? If we’re not doing something well, what are we doing to correct those issues?’ ’’ Jerald said.

The commitment of senior management, including CalPortland CEO Allen Hamblen, plays a major role in helping the company lead the way in sustainability, said both Jerald and Coppinger.

“To make something like this a success, you need your CEO to support the program. You’ve got to have that guy,” said Jerald. “When employees get a personal email from the CEO congratulating them for sustainability successes like we do, it means a lot.”

Improvement in the management of compressed air is ongoing at CalPortland, which is not surprising since it’s a utility found at most operations. The mix of air compressors used is also diverse, ranging from small rotary vane air compressors for pneumatic conveying at ready mix plants to large reciprocating air compressors rated to deliver up to 2,000 scfm each at its cement plants.

When it comes to making changes in compressed air systems, CalPortland is a proponent of regular system assessments and ENERGY STAR Energy Treasure Hunts across its facilities. It’s all with an eye toward positive outcomes, said Coppinger.

“We’re not trying to find things wrong with a plant. It’s finding treasure and finding opportunities to improve efficiencies,” he said, noting the significant value in being an EPA ENERGY STAR Partner. “It’s a great program and a great forum for working with others who conduct energy programs and to learn and share best practices,” Coppinger said. 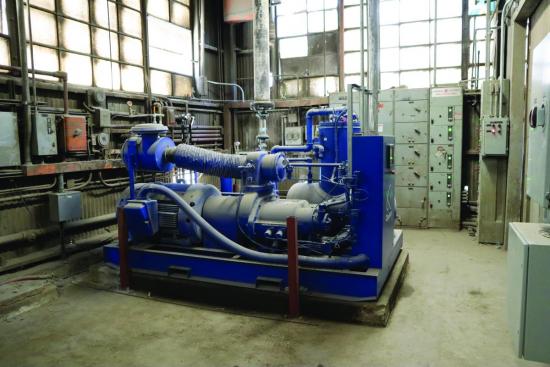 Rotary screw air compressors are used to power a wide variety of applications at CalPortland cement and ready mix plants.

Both Coppinger and Jerald consider Treasure Hunts to be invaluable. Jerald points to a relatively recent project involving a compressed air system at a ready mix plant that was not keeping pace with demand.

The team at the plant determined it needed to replace an existing air compressor with a new one to remedy the issue. Before taking action, however, Jerald helped the plant facilitate a planned treasure hunt to further assess the situation before proceeding. As part of the treasure hunt, Jerald searched for compressed air leaks using an ultrasonic leak detector. He said he appreciated wearing the leak detector headphones given the size of the leaks discovered, along with other issues.

“My headgear was actually protecting my ears from the noise with one leak,” he said. “But we fixed these things and guess what? They didn’t need an air compressor anymore and the capital project was cancelled, saving at least \$50,000.”

Jerald said the team at the plant was happy to resolve the issue given their focus on continuing to meet production goals. They also appreciated saving costs and learning about opportunities for compressed air improvements.

“After you do these activities you can see the level of knowledge growing,” Jerald said. “When you know the plants are aware and stuff is being done to improve things, it’s really exciting to see.”

“In the past, some of our cement plants would keep compressed air for the entire plant at an unnecessarily high pressure because they thought they needed to keep it at a certain psi level, or the whole plant would shut down,” said Coppinger, citing one example of understanding how compressed air is used and finding ways to better manage it.

“We did some digging and we found we have certain applications that require high pressure air to run equipment, such as in our laboratory. In this case, we’ve installed a small, dedicated air compressor in the lab so we could lower the pressure for the whole plant since we only needed high-end pressure for this one application,” he said.

“With receivers working as a buffer we can supply that high level of compressed air when needed intermittently for this application without causing pressure drop in other areas of the plant,” he said.

The cement plants even participate in an annual “Energy Cup Competition” designed to track and recognize sustainability success. The plant with the best energy measures and overall performance receives a coveted plaque that travels to the winning plant each year. CalPortland’s CEO awards the plaque to the winner at an annual meeting.

Whether it’s implementing best practices or participation in ENERGY STAR programs, achieving success in sustainability will remain a priority and continue to increase in importance for CalPortland, Jerald said.

“It’s always growing. It’s not perfectionism. It’s realism,” Jerald said. And, while it’s never-ending, he said the progress in sustainability is clear. He cites yet another recent example where a plant decided to invest in mechanical conveying rather than using compressed air to transport cement at a truck-loading station.

“We could’ve gone with an air compressor, a pump and some piping and got the project done with relatively low capital cost, but we decided to put more money in upfront because we knew mechanical conveying would be more efficient and our operating costs would be lower versus using compressed air,” Jerald said. “That’s our culture. It’s embedded now.” 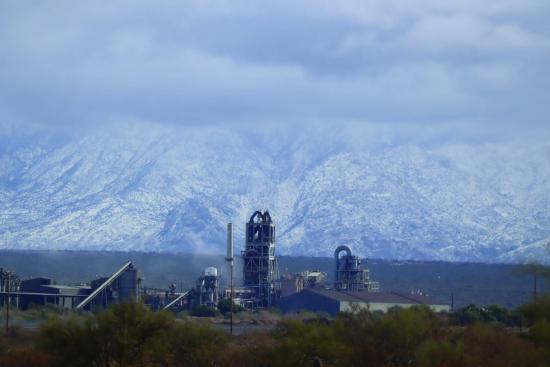 Like many CalPortland facilities, the Rillito cement plant in Rillito, Arizona, will continue implementing compressed air best practices and taking steps to protect the environment.

Today, CalPortland has every intention of improving on its sustainability track record.

“We’ve been around for more than 100 years and we plan to continue to be around for another 100 years or longer, “Coppinger said. “We’re excited about the prospect of improving our efficiencies and minimizing our environmental footprint going forward.”

All photos courtesy of CalPortland.