Compressed Air is a Star at Ball Corporation


Paying close attention to compressed air use is paramount for identifying potential energy-saving projects. The engineering team at Ball Corporation has been well aware of this fact for years. An active member in the Environmental Protection Agency’s ENERGY STAR® program, Ball Corporation scrutinizes manufacturing processes to maximize the energy efficiency of compressed air systems in each of its plants.

Compressed air accounts for a significant percentage of the total power consumption at the Saratoga Springs facility. They operate both low-pressure and high-pressure compressed air systems.

To learn more about Ball Corporation’s Saratoga Springs facility and how their plant engineers optimize for compressed air efficiency, the team at Compressed Air Best Practices® Magazine spoke with Bob Nelson, the facility’s Engineering Manager. During our conversation, Nelson told us about demand-side projects they have implemented to reduce compressed air demand. He also described modifications performed on the supply side to better accommodate the lower demand. 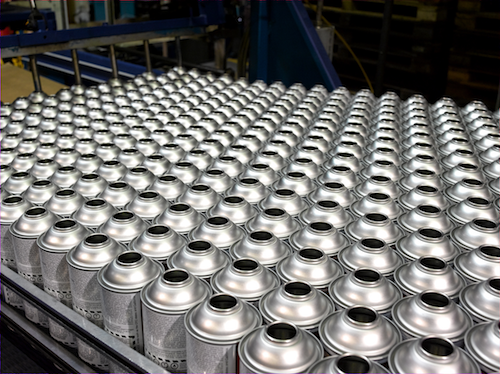 Partnering with a knowledgeable compressed air system supplier has been beneficial for Ball Corporation. The company’s national partner, Blackhawk Equipment, has provided both compressed air and process expertise.

“Blackhawk Equipment has been in many Ball plants around the world providing equipment and expertise, and they are very familiar with the applications,” Nelson said. “Chris Gordon at Blackhawk is a great resource. He’s done a ton for us.”

The production equipment at Ball Corporation has a “superintendent team” with knowledge specific to each process. According to Nelson, they really understand the equipment and all of the manufacturing processes throughout the plant. However, when it comes to support equipment (i.e. air compressors, vacuum pumps, etc.), there were times when they did not realize how a change would impact the system. Nelson has been at the plant in Saratoga Springs for 16 years, and has been a major driver in educating the production team about their resources.

“I try to teach everyone a little bit about the support equipment and compressed air demand,” Nelson explained. “When I first came on board, they were having some problems in production. And so they would just say ‘we need more compressed air’ — and then somebody would start up another air compressor. I’d go back there and find all three compressors blowing off.”

Once the production team understood pressure and flow, they starting taking ownership of how much compressed air the machines used. To reduce demand, the team talked to OEMs, and some vendors were able to make design adjustments to push the pressure requirements down.

“They [the production team] talked to the OEMs and came up with the latest designs,” Nelson told us. “We were able to upgrade all the equipment to this new design that uses less compressed air. We were able to turn our pressures down, and the leaking issues also went away. It’s all part of their culture now, to take a look at compressed air use.” 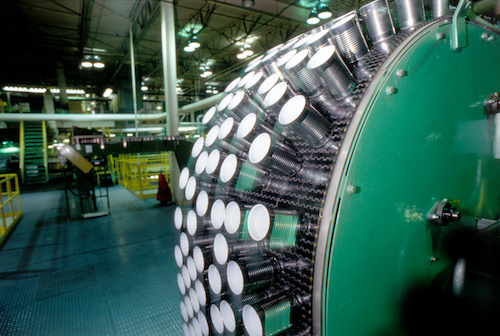 Paying attention to compressed air use has yielded another benefit for the production team. On certain pieces of equipment, compressed air is measured and charted. It is also displayed on several tools available at Ball, providing easy access to information, such as pressure and volume trends. With that information easily accessible, production can use it as a preventative maintenance tool.

Over Nelson’s tenure at the plant, the overall demand-reduction effort has resulted in substantive drops in compressed air use.

“When I first got here, we were running about 11,000 cfm total, and a big portion of that was on the high-pressure side,” Nelson said. “Over time, we’ve reduced the number significantly.” 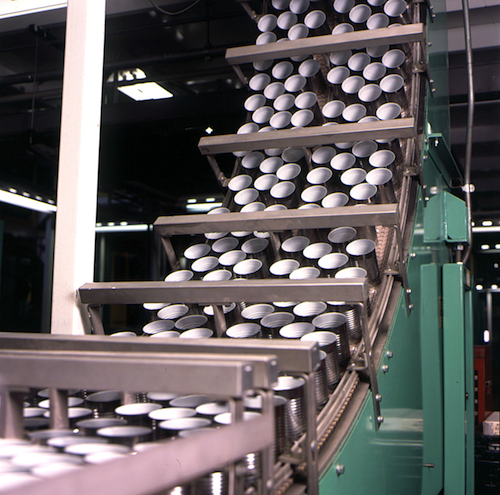 Demand-reduction projects fed into supply-side opportunities, where Ball could reevaluate required capacities and drive big savings in energy. The effort started on the high-pressure system, where consistent throttling occurred due to oversized capacity.

“A big part of our reduction was getting the right air compressors in place,” Nelson told us. “We had three 900-hp air compressors. And if we had three of them running, one of them was blowing off. We’ve gone through a series of projects to ‘right size’ the high-pressure air compressors, and that is where all these projects started.”

Originally, the high-pressure compressed air system had three centrifugal air compressors in place. As demand decreased, Nelson said they “went from running three machines, to two machines, to one,” getting to the point where one would still blow off air. Ball worked with its vendor to redesign the air end and put a 600-hp motor on the machine, reducing its capacity to efficiently provide 2200 scfm at 100 psi. While this worked for several years, demand was eventually reduced too far below the machine’s optimal performance curve, and it used 23.3 kWh per 100 cfm.

“After a while, we got down to around the 1550 cfm, and we were blowing off 99 percent of the time,” Nelson said. “The valve would be open 20 or 30 percent, so we started putting together a program to replace the compressor. We went to a flooded screw 400-hp machine with a variable speed drive — two stage. And that machine uses 262 kilowatt-hours for the same output, so that’s 16.9 kWh per 100 cfm.”

On the low-pressure side, the original air compressor was a rotary screw machine. According to Nelson, it “was more of a constant volume, variable pressure type of compressor.” Consequently, a blow-off system was put in place to maintain a consistent pressure, because the varying pressure impacted the quality of the necking process.

“In order to hold a constant 40 psi, the discharge of that compressor was connected to a blow-off valve set at 40 psi,” Nelson said. “It basically made a false load on the compressor, keeping it running at a constant discharge pressure after that blow off.”

To retrofit the system, Ball replaced the older low-pressure machine with a two-stage, 1250 hp centrifugal compressor. The newer compressor enabled Nelson to modulate the intake instead of blowing off excess pressurized air.

Energy rebates have made all of these projects more compelling. Nelson said all of the “projects have been funded between 33 and 50 percent by rebates.” Ball goes through pre-measurement and post-measurement stages to prove energy savings and receive payback. According to Nelson, that has “really helped getting capital funds approved through the corporate system.” Doug Barndt, the Manager of Demand Side Energy – Sustainability at Ball Packaging Americas, has also been a major proponent of compressed air system improvements throughout the organization.

Ball Corporation’s dedication to energy management has yielded tangible results. Being an active member in the Environmental Protection Agency’s ENERGY STAR® program has helped. To date, the Saratoga Springs facility has seen a significant reduction in electrical energy (kW) use — resulting from compressed air system refinement and other process changes. As Nelson said, “We’re always looking to improve efficiency here in New York.”

To read more about Sustainability at Ball Corporation, visit www.ball.com/sustainability.

To learn more about the ENERGY STAR for Industry program, visit www.energystar.gov or contact Rod Smith at email: rod@airbestpractices.com.