There are many reasons why the U.S. Environmental Protection Agency (EPA) ENERGY STAR® Energy Treasure Hunts have proven successful in helping companies save energy and natural resources, but one that rises to the top is their ability to build a culture of energy efficiency throughout an organization. 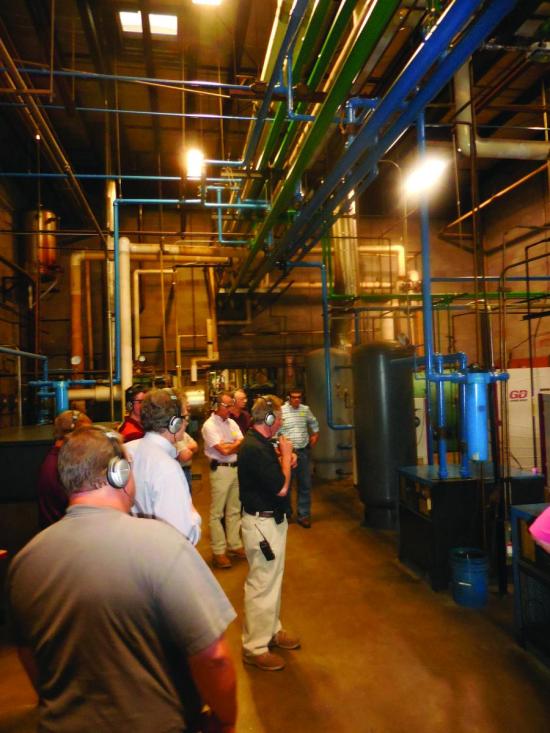 Participants in an ENERGY STAR Energy Treasure Hunt at Intertape Polymer Group Inc.’s operation in Danville, Virginia, discuss ways the plant can save energy with its compressed air system.

That’s because successful energy treasure hunts thrive on employee engagement, among other factors said Bruce Bremer. And Bremer is someone who would know. In the mid-1990s he led the team at Toyota Engineering and Manufacturing in Georgetown, Kentucky, that developed the foundation for energy treasure hunts – and the same basic concept is still used today. Additionally, Bremer, now as a consultant facilitating treasure hunts, works with companies in a wide range of industries has resulted in potential energy savings of \$41 million to date.

“Many companies use energy audits and assessments to their advantage, and there’s no question those are valuable tools,” Bremer said. “Yet what we learned at Toyota is that we needed more people from all different areas of the plant to become involved with energy and work together to take what we already had and make it more energy-efficient.”

The concept of treasure hunts soon gained momentum as Bremer and the team at Toyota shared the idea with other ENERGY STAR partners. Eventually, Bremer left Toyota and joined the ENERGY STAR Industrial Team in a role as a strategic energy advisor. He also wrote the ENERGY STAR “Energy Treasure Hunt Guide: Simple Steps to Finding Energy Savings,” which is the document most companies now use to put the powerful tool to work as part of their ongoing sustainability efforts. The guide is available at https://www.energystar.gov/treasurehunt.

Energy treasure hunts are designed to identify no- and low-cost energy savings opportunities that result in immediate or short-term ROI. They also help build teams dedicated to an ongoing process for implementing energy control measures designed to reduce energy use, costs and associated greenhouse gas emissions.

Each energy treasure hunt is a dynamic process for identifying savings opportunities. It consists of four key elements: Preparation, pre-training, a three-day team event, and follow-up activities. Opportunities for energy efficiency are found in operational areas and involve all plant utilities including compressed air, chilled water, water, steam, and lighting, as well as electricity and natural gas.

“Treasure hunts are one tool in vast array of other tools used in an energy program,” said Bremer who is President of Bremer Energy Consulting Services, Inc. (www.bremerenergy.com).

“The intent is not to go out and spend a whole bunch of money on changes on things that aren’t running efficiently to begin with, which is why the idea of building a culture is important. Approximately 80 to 85% of the people involved in treasure hunts are from the plant floor,” said Bremer. “Having members from the lean manufacturing groups be part of treasure hunts is also beneficial, especially since treasure hunts have lean concepts in them. It is important to ask the question; ‘Why is it done that way and is there a better way?’ ”

An energy treasure hunt fosters cross-functional collaboration and typically includes three to five teams of employees from all areas of production, as well as facilities, engineering, maintenance and administration. The plant’s energy manager, or continuous improvement manager, often leads the initiative.

“Energy treasure hunts are different than having an auditor or someone come in from the outside of the company with a list of projects. Instead, it’s the team saying, ‘Here are things we’ve found and projects we can implement to save money.’ It’s a whole different concept in terms of involvement, engagement and ownership. The culture side is what streamlines it and makes it all work,” Bremer said.

Also essential to an energy treasure hunt is a balanced approach to identifying opportunities on the supply and demand side of the energy equation. Bremer cites a compressed air system as an example.

“On the supply side the team looks at numerous factors,” he said. “For example, they might look at the efficiency of the air compressors themselves and the kilowatt hours of energy consumed per cubic foot to power the unit’s electric motors. Or, it might be whether some or all of the air compressors can be turned off during low-demand periods and weekends. Or, the teams might consider the potential to use less air during seasonal periods of production. Those are just a few examples of things explored.”

Bremer said the process is equally comprehensive on the demand side of a compressed air system.

“From the end-use side, where are opportunities to lower demand? There are many,” he said. “Is the plant using energy-efficient nozzles for blow-off applications, or quarter-inch copper tubes? Or, is the header pressure 110 psi when the process only needs 80 psi?” he said, referencing a few examples. “It’s important to look at compressed air or any utility as a system.”

With any energy treasure hunt, the vital next step with compressed air leaks is making a commitment to take action.

“There needs to be an ongoing program to regularly identify and quantify air leaks and also take that information and get it into a work order so someone goes out and fixes them, whether it’s an internal or external team,” Bremer said. “It’s also important to keep the information in a tracking system so that it’s integrated into an ongoing preventive maintenance schedule.”

Leveraging Treasure Hunts with All Utilities

“Is there an opportunity to use Variable Speed Drives (VSDs) on pumps versus running fixed-speed pumps all of the time? Or, maybe it’s a matter of not letting the air-handing units run all weekend when they’re not needed. There are many areas where energy and water savings can be achieved on the supply side of these systems,” he said.

Bremer said energy treasure hunt teams also frequently uncover numerous opportunities to reduce water consumption, stressing the importance of using flow meters to measure how much water is used by a cooling tower for cooling versus how much is evaporated. Most companies don’t use them, he said, yet companies continue to find ways to save chilled water.

“The teams will look at water makeup systems and how to conserve water, such as using recycled water in a cooling tower rather than the fresh water. Or, it might even look at air-cooled air compressors versus water-cooled units to save water, or air compressors with heat recovery systems – both of which are often future considerations since the idea of energy treasure hunts is to implement no-cost or low-cost operational efficiencies versus expenditures.”

A Path for Ongoing Progress

As a strategic energy advisor, Bremer works with a diverse range of companies to get energy treasure hunts off the ground. Additionally, he stays closely connected with companies throughout the process and afterward to offer advice along the way. Each company eventually adopts its own energy treasure hunt program.

Whether it’s the initial effort or ongoing energy treasure hunts, success is often driven by engagement and ownership of employees at every level, he said.

“Energy should be integrated into the business culture of the company and should not be separated or made as a separate program. Energy has its foothold in a variety of areas inside a company,” Bremer said, adding treasure hunts should be an ongoing process that will continue.

Energy savings are hidden in many places. ENERGY STAR’s energy treasure hunts are a way to find that buried treasure – and for companies to share their findings and obtain recognition. For more information about ENERGY STAR Energy Treasure Hunts, visit https://www.energystar.gov/treasurehunt.

If you would like someone to facilitate an energy treasure hunt at your site please contact Bruce Bremer, tel: (859) 620-6180, email: bremerenergy@gmail.com.