Stanley Black & Decker Plant in Tennessee: A Beacon of Sustainability


New Britain, Connecticut-based Stanley Black & Decker has gained widespread recognition for its commitment to social responsibility and sustainability – and with good reason: The company has reduced CO2 emissions in 2018 by 8,840 metric tons and in 2019 it was on track to further reduce greenhouse CO2 emissions by another 4,000 metric tons.

And its leadership continues. Stanley Black & Decker’s goal is to make its more than 100 operations worldwide carbon positive by 2030, which means its carbon capture will be greater than its CO2 emissions. All the while, achieving sustainable water use and reaching a goal of zero-to-waste landfill is equally paramount - across all operations. 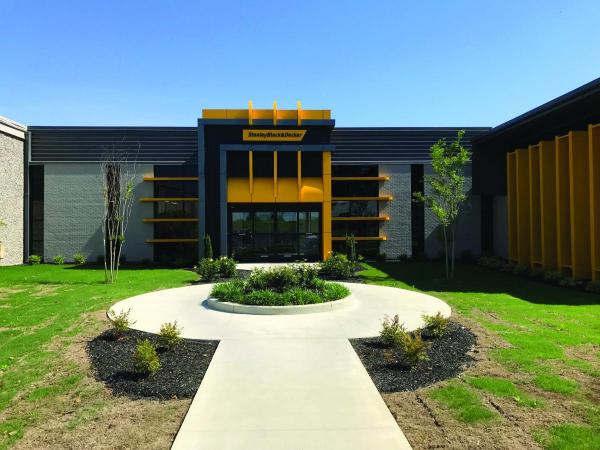 “We have to ensure as we’re manufacturing products that we’re not doing anything to harm the environment during our processes,” said Lora Gans, who serves as the Environmental Health & Safety Manager at the Jackson plant. “We’re always paying attention to whether there is something we could be doing better.”

Among these operations is the Stanley Black & Decker’s manufacturing plant in Jackson, Tennessee. It serves as a sterling example of how a leader in environmental stewardship (www.stanleyblackanddecker.com) achieves its goal of being “a force for good.” The plant has reduced energy consumption by 7.8% since 2015, which equates to a carbon footprint reduction of 45.5%. It has also reduced water consumption by more than 1.7 million gallons. Additionally, the operation became a landfill-free manufacturing plant in 2019 – meaning it no longer sends any waste to the local landfill. There are also substantial initiatives in the works, taking sustainability to an even higher level at the Tennessee operation.

Setting the Example for Others

The Jackson plant is a key operation within Stanley Black & Decker’s Global Tools & Storage (GTS) business, which has established itself as the world’s largest maker of power tools, hand tools, accessories and storage products for tradespeople and Do-it-Yourselfers.

With more than 800 employees on campus, the Jackson operation takes great pride in manufacturing hand-carry air compressors from start to finish under the leading brand names of Craftsman, DEWALT, Bostitch and Porter Cable. The plant also manufactures precision components, such as gears and shafts, used in a wide range of tools. The plant ships the components to other Stanley Black & Decker operations for final assembly. 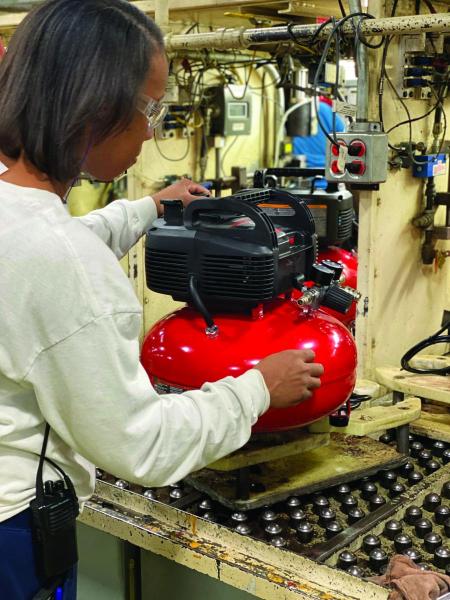 The 450,000-square-foot manufacturing plant, which is ISO 9001:2015 and ISO 14001:2015-certified, employs 620 people. Remaining employees work at the operation’s onsite 600,000-square-foot distribution center. The manufacturing plant is also expected to become ISO 45001:2018-certified. In 2016, Stanley Black & Decker named the Jackson operation a GTS Lighthouse Manufacturing Site. The designation means the plant serves as a beacon for other plants to emulate for innovative methods of production and environmental sustainability.

The ECOSMART™ Advantage: A Corporate-wide Commitment

One major component to Stanley Black & Decker’s strategy is to create a more sustainable world through “ECOSMART™,” a company-wide approach to product sustainability.

“ECOSMART is a philosophy that describes how we as a corporation embed sustainability in every single thing we’re doing,” said Gans. “And it’s not just within our plants; it’s embedded throughout our entire value stream chain. We not only want to improve our operations but carry it over to our products and into the community.”

ECOSMART is an integral part of the corporation’s dedication to social responsibility. The pillars of Stanley Black & Decker 2030 social responsibility strategy are to empower employees and citizens to thrive in a changing world; innovate products that enhance the lives of people and improve environmental impacts; and to create a more sustainable world – and positively impact the environment through its operation. Plans call for achieving CO2 reductions through ECOSMART projects, utility-specific programs, renewable energy generation initiatives and energy attribute certificates.

Stanley Black & Decker also uses science-based targets to quantify and measure its sustainability efforts and commitment to sustainability. This includes an ECOSMART Scorecard, which serves as a statistical record of its achievements using 2015 as a baseline for measuring success. The company’s annual social responsibility and sustainability reports are available at https://www.stanleyblackanddecker.com/social-responsibility/annual-sustainability-reports.

Everyone Has a Role

The Jackson plant uses ECOSMART to help guide its path, while also employing a successful formula involving multiple elements that come together to allow the operation to achieve – and typically surpass – its sustainability goals.

One foundational element of success, Gans said, is the people who work at the Jackson operation and all of those who come into contact with it.

“Everyone is a part of sustainability,” she said. “For example, it has to be the people on the production floor participating in the effort to reduce our waste and increase recycling. You need their buy-in and understanding, which makes it really important for us to communicate the entire program to everyone.”

Achieving success in sustainability also involves partnering with organizations and companies dedicated to environmental stewardship, Gans said. As an example, the plant is an active member of the Tennessee Green Star Partnership (TGSP) program, which connects leaders in manufacturing sustainability in Tennessee looking to implement or improve efforts to save energy and reduce or eliminate pollution from air, water and/or land. The voluntary program also recognizes companies in Tennessee committed to sustainable best practices. (Read more about the program at www.airbestpractices.com/sustainability/energy-incentives/incentive-program-profiles/shining-spotlight-manufacturing-sustaina.)

“The program is extraordinary,” Gans said. “We have the opportunity to link up with other Tennessee Green Star Partners and share our experiences and we can see how all of us can take the next step with different opportunities.”

Another major factor in the Jackson plant’s success is its ability to innovate and think creatively, which is especially important given the uniqueness of the operation.

“We’re a very complex plant because we do both precision-machining of parts, while also assembling air compressors from start to finish. At the same time, some of our equipment is older and we have state-of-the art robotics. We are very innovative in what we do and how we do it,” Gans said, adding how the operation never stops thinking about ways to improve sustainability.

Gans said innovation also means carefully assessing and implementing initiatives that save energy and deliver the best possible results. On that score, there are no shortage of successful projects at the Jackson plant.

One successful project implemented a few years ago is the plant’s replacements of incandescent lighting with LED lighting. The plant also installed motion sensors on overhead fans used for comfort cooling. Both initiatives contributed significantly to enhanced energy savings.

More recently, the plant replaced a fixed-speed 400-horsepower (hp) rotary screw air compressor with two energy-efficient, fixed-speed rotary screw air compressors, one of which is rated at 200 hp and the other at 250 hp. The compressed air system powers production equipment and processes throughout the plant. In addition to air compressors the upgrade features an automated control system, which allows one unit to provide the majority of the compressed air needed throughout the plant, while the second machine only operates when needed to meet peaks in demand for compressed air. Additionally, the plant will soon install solenoid valves on production equipment to automatically shut off the use of compressed air when it isn’t needed.

Another recent project involved the replacement of one 50-year-old 650-ton, water-cooled central chillers with a Variable Speed Drive (VSD) water-cooled chiller rated to deliver 330 tons of cooling. Unlike the old chillers, the new VSD chiller only generates the cooling water needed, when needed – in turn saving considerable energy.

Combined, the compressed air system and central chiller project allow the Jackson plant to reduce energy consumption by more than 200,000 kilowatt hours (kWh) per year, which equates to an annual CO2 reduction of 1,414 metric tons.

The painting process incorporates the use of gas-fired burners to warm water stored in holding tanks. Water is used to wash manufactured components before they’re painted. Plans call for the installation of an air-to-water heat exchanger on the roof of the plant to capture waste heat from an oven used in the paint drying process. The heat exchanger will capture thermal energy that would otherwise exit through the flue stack and use it to warm the water in the tanks. The project is expected to save 141,000 thermal units of natural gas, resulting in a CO2 reduction of 748 metric tons. 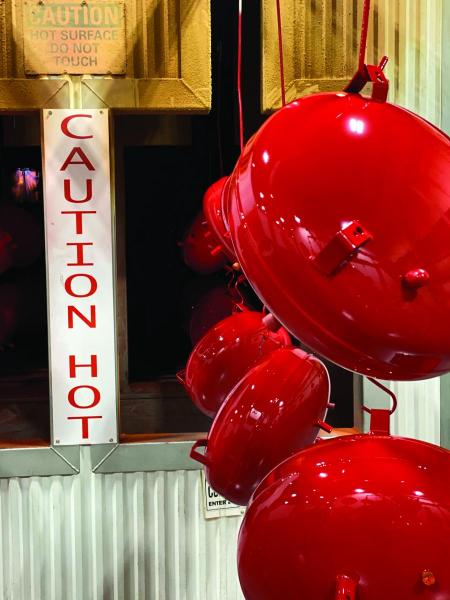 At the Stanley Black & Decker plant in Jackson, Tennessee, hand-carry air compressor tanks enter an oven as part of the paint curing process.

Gans said energy-savings initiatives – as well as any sustainability efforts – tie back to innovative and creative thinking.

“We often have to take a step back and think about what we’re doing, how we’re doing it by asking a lot of questions,” she said. “It’s not always easy, but it involves really thinking about the things we can do to protect the environment.”

Innovative thinking, combined with hard work, extends to the Jackson plant’s progress in water conservation – and its achievement in totally eliminating waste sent to landfills.

To save water, the operation installed automatic toilet flushers and faucets throughout – and as a result – reduced water consumption by 1.7 million gallons. It also dialed back the amount of water used in washing components in the painting operation, saving 200,000 gallons of water without impacting production or product quality.

Another major achievement is the plant’s designation as a landfill-free manufacturing site. The project, which began several years ago, involved the creation of numerous ways to recycle materials consumed in every aspect of the operation.

“We needed to educate our employees from the ground up,” she said, adding how landfill reduction and recycling efforts also involves consistent communication and reinforcement.

In the meantime, Gans works closely with numerous recycling companies who are not only proven and qualified, but also share the same philosophies as Stanley Black & Decker.

“It requires a lot of research to make sure we’re comfortable working with them and to make sure they’re good stewards of the environment. We really do our due diligence when it comes to vendors,” she said. “We are very happy with the vendors we now partner with to achieve our goals.”

Looking Out for the Next Generation

All of the Jackson plant’s sustainability efforts are closely examined for how they can best support the operation’s specific goals, while also being closely aligned with the corporate mission of Stanley Black & Decker.

“We’ll do the footwork at the local level in terms of planning,” Gans said. “If it’s a capital project we’ll then put together a proposal for corporate’s approval to show the total cost, the energy or water savings to be achieved, and the payback period.”

One unique proposal under consideration at the corporate level is for the Jackson plant to implement a major solar power initiative. Plans call for an energy company to install solar panels onsite at the facility. Additionally, the company will execute the project at no cost to Stanley Black & Decker. Instead, it will charge the plant for the solar-generated electricity supplied. The project is expected to provide the plant up to 40% of the electricity needed, which would allow it to offset the operation’s CO2 emissions by as much as 6,306 metric tons.

“For us to continue on our path toward success, we’re going to need to do what we can to get us to the carbon-free footprint,” Gans said, adding continued success also means thinking about the next generation.

“Our commitment to sustainability is a corporate-wide effort and a plant wide-effort. We want the next generation to have the same or better experiences than we have now. I’m proud to be a part of this effort,” Gans said.