Sustainability is “Part of Who We Are” at Eastman


This year Eastman celebrates its 100th anniversary and marks its role as a leader in the chemical industry with \$10 billion in revenues. As an innovator and manufacturer of advanced materials and specialty additives found in items people use every day, there is no shortage of achievements to celebrate – and one that stands out is its commitment to environmental stewardship. 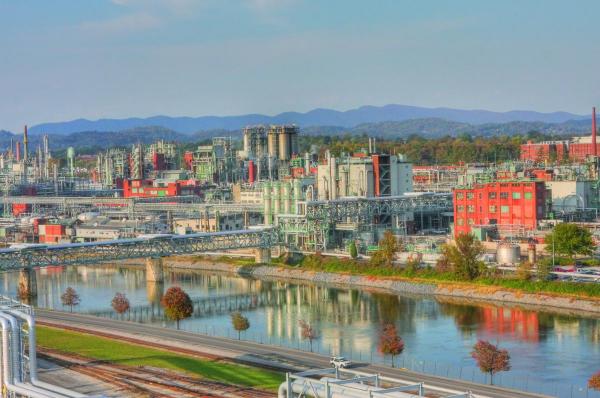 By making sustainability a requirement and a core element of its growth strategy, Eastman (www.eastman.com) has improved the energy efficiency of manufacturing operations by 13% since its baseline year of 2008 (the year Eastman became an ENERGY STAR® Partner). By 2018, Eastman had decreased its greenhouse gas intensity by 20%, two years ahead of its goal. Additionally, Eastman received the 2019 ENERGY STAR® Partner of the Year Award for Sustained Excellence, marking the company’s eighth consecutive ENERGY STAR award: two years as Partner of the Year and six years of Sustained Excellence recognition.

Headquartered at the base of the Appalachian Mountains in Kingsport, Tennessee, Eastman is committed to furthering its environmental performance with sustainability at the heart of its purpose and strategy.

“It’s an exciting time for our company,” said Sharon Nolen, Eastman’s Manager of Global Natural Resource Management. “A lot of our efforts are coming into alignment and we’re only going to increase our emphasis on sustainability.”

Eastman has always been committed to saving energy and conserving resources. In 2010, soon after establishing baseline goals for energy efficiency and becoming a U.S. Department of Energy Better Plants Challenge Partner, these efforts expanded. The Eastman 2019 Sustainability Report is available at https://www.eastman.com/Company/Sustainability/Reporting/Pages/References.aspx.

Another factor driving increased emphasis in sustainability is Eastman’s refocus of a global energy team in 2010 and the naming of Nolen as global energy manager. With a dedicated team and team leader, Eastman renewed its efforts to identify energy savings opportunities throughout its global manufacturing operations.

In addition to a highly focused approach, Nolen became active in the U.S. Environmental Protection Agency’s ENERGY STAR program. Attending program meetings and forming relationships with other companies involved in the program led to ideas and learning about new ways to turn ideas into action. Nolen points to increased employee awareness and engagement as one example of success from ENERGY STAR program participation.

“That’s something ENERGY STAR really stresses,” Nolen said. “Approaches that work best for engagement are those that peak curiosity and interest. We’ve had energy fairs and a variety of events and communications to get people interested in how energy efficiency benefits our company and also how they can save energy at home.”

“Any company that spends a lot of money on energy has been thinking about energy efficiency for a long time. We used to think of energy efficiency primarily as a means to save money, but that’s changed. We believe there are a lot of benefits beyond that and it’s become part of our identity.”

Switching Up the Energy-Savings Conversation

When starting her new position, Nolen identified the critical need for funding in order to turn capital intensive energy-saving ideas into reality.

“I heard a lot of great ideas from people about projects they wanted to do, but they hadn’t received funding,” Nolen said, adding how she worked to improve the program. One idea that was of particular benefit was the need to establish a corporate energy budget. Another was to change the way in which energy projects are evaluated and discussed with company executives.

“In talking with the top-level executives, I learned they like to look at things in terms of an Internal Rate of Return (IRR),” Nolen said. “So, I modified how I presented information to the executives and began to speak in those terms.”

In addition to talking the talk, Nolen walked the walk – starting at a meeting in 2011. There, she presented a portfolio of projects ranked by IRR to the executive steering committee. At the end of the meeting, the committee established a capital budget for energy projects that totaled \$4.2 million based on initiatives with an IRR greater than 23%. The IRR is a metric used in capital budgeting to estimate the profitability of potential investments.

“It was exciting for me,” Nolen said. “In a one-hour meeting, I was able to show how we could really make a difference. It wouldn’t have been possible without having established that working relationship with our company’s senior executives. Gaining a capital budget specifically for energy projects changed our conversations with manufacturing employees. In the past, we could encourage manufacturing to do energy projects, but it’s a different conversation when we can provide financial support as well.”

Based on proven success – and the ability to meet IRR goals – Eastman’s annual capital energy budget grew from \$4.2 million in 2011 to \$8 million today. In addition to the incorporation of energy efficiency in capital investments, Eastman’s guiding principles for managing energy efficiency include accuracy of information and the maximization of existing assets.

When planning energy projects today, Eastman aims to use the energy capital budget to fund initiatives that cost less than \$1 million and can generate an IRR greater than 20% - although there are exceptions to the rule.

“The reason we use the figure of \$1 million is because we believe it’s good to spread the money around, so the budget isn’t spent on one project or one site,” Nolen said. “We’ve made exceptions, but those are our general guidelines.”

In addition to funding, Eastman dedicates people and talent to its sustainability goals as evidenced by its global energy team of six full-time engineers. The team works closely with Eastman’s manufacturing plants to establish energy reduction goals and plan and prioritize projects. The team generally focuses on 22 of Eastman’s 51 global manufacturing plants since the 22 plants constitute the majority of the company’s energy. These plants have a local site energy coordinator who participates in the worldwide energy team and is also responsible for overseeing energy improvements at the site.

The global energy team regularly updates each plant’s process improvement engineers, as well as other manufacturing and engineering groups, with information about innovative energy programs and best practices – and the availability of capital.

At each plant, energy consumption is carefully measured and energy surveys are conducted to identify areas for improvement, whether it’s maximizing operating efficiency or achieving energy efficiency through capital investments. Based on information gathered, the global energy team subsequently prioritizes projects based on a number of factors, including the investment required and the IRR. The team also works closely with the local plants to stimulate new ideas and assess the implementation of technologies.

“As an example, we supply our operations managers with information and data. Having that data generates questions and answers that lead to results,” Nolen said, adding Eastman invests heavily in computerized systems and metering needed for data acquisition and analysis.

Energy Projects: From Basic to Complex

At any given time, Eastman has as many as 150 energy-efficiency projects underway at various manufacturing plants. Projects range from fundamental operational changes that save energy at little or no cost to highly sophisticated, capital-intensive initiatives.

An example of an energy reduction initiative completed with no capital cost involves a compressed air system used in a manufacturing area within the massive 900-acre plant in Kingsport.

On the opposite spectrum of project complexity is Eastman’s optimization of Combined Heat and Power (CHP) systems used to power various plants.

At the Kingsport plant, a CHP system supplies the operation with 90% of the power needed, while also providing steam for powering utilities equipment, including air compressors and refrigeration equipment. The steam is also used for process equipment and space heating. The system is very efficient and was also recognized by the U.S. EPA with an ENERGY STAR® Combined Heat and Power (CHP) Award for excellence in combined heat and power operations at its Kingsport site in 2014. EPA’s CHP Partnership is a voluntary program that encourages the use of CHP to reduce the environmental impact of power generation.

To continue to achieve even more energy efficiencies, Eastman is updating the controls used to manage the system, which consists of 17 boilers and 19 turbo generators. In all, the system is capable of generating up to 200 megawatts (MW) of electricity, while also producing 3,600,000 lb./hr. of steam to meet the thermal needs of the plant.

In addition to systems optimizations, Eastman switched from coal to natural gas to fuel five of its 14 coal-fired boilers, leading to a significant decrease in the company’s greenhouse gas intensity compared with the 2008 baseline.

Other energy-efficiency projects with a high IRR run the gamut from the use of variable speed drives on pumps, to a comprehensive steam leak repair program, to better insulation on miles of piping at various plants to reduce heat loss, to process optimization.

Eastman also switched out many low-efficiency light bulbs with LED lighting at several manufacturing plants. In planning the projects, Nolen reached out to her contact at ENERGY STAR who connected her with a steel company that implemented a similar program. The steel company provided information on how they approached lighting replacement projects including how they evaluated the economics and return on investment. The Eastman lighting project received approval with the help of this information from the steel company.

“You wouldn’t think a chemical company and a steel company have much in common, but when you’re evaluating a lighting project there’s very little difference,” Nolen said. “The ENERGY STAR network is extremely valuable.”

While the global energy team and local plants implement ideas for energy efficiencies, Eastman continues to look for other ways to improve sustainability. Among them are initiatives to increase water efficiencies and reduce volatile organic compounds (VOCs).

Looking ahead, Nolen anticipates increased emphasis on energy efficiency and other levers for reducing greenhouse gas emissions. She said interest and enthusiasm in sustainability at Eastman continues to grow.

“One thing that really encourages me is to see that the younger generation is very interested in sustainability along with our more experienced employees. The enthusiasm of the newer employees is contagious and also brings a fresh perspective” Nolen said.

All photos courtesy of Eastman.