YoCream and Blount Save with the Energy Trust of Oregon


Since 2002, Energy Trust of Oregon has saved and generated 728 average megawatts of electricity and 52 million annual therms of natural gas. This is enough energy to power Multnomah and Washington counties while heating Deschutes County homes. ETO has saved enough energy equal to the output of a power plant and reduced reliance on fossil fuels. In total, they have invested \$1.5 billion to save customers more than \$6.9 billion on their energy bills over time. They have also added \$5.7 billion to the local economy, including \$1.7 billion in wages, \$312 million in small business income and employment equal to 4,700 full-time jobs lasting a decade. Carbon emissions have been cut by nearly 20 million tons, equal to removing 3.5 million cars from the roads for a year. Efficiency remains the least expensive energy resource Oregonians can buy. This affordable energy supply helps utilities avoid investment in new and more expensive energy resources. The following articles are just two examples of such success stories. 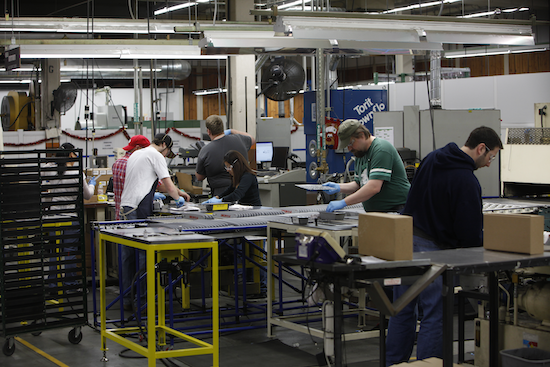 Sawchain Manufacturer Hones Its Process with Energy Efficiency Upgrades at Blount International, Inc. Should Save More Than \$200,000 Annually

In April 2009, Blount International, a global manufacturer of sawchains and equipment for the forestry, garden and construction industries, was searching for ways to cut costs. With a mounting recession and decreasing plant production, management personnel at Blount’s Portland and Milwaukie facilities were exploring energy efficiency as an untapped opportunity for operational savings. It didn’t take long before Blount’s new-found energy management team discovered and took advantage of the Industrial Energy Improvement initiative offered by Energy Trust of Oregon.

Fast forward to late 2010. After participating in the 2010 Industrial Energy Improvement for 12 months and completing seven energy-efficiency projects, Blount expects to save an estimated \$227,805 per year in electricity costs. Combine those savings with production levels that have increased significantly, and the bottom line at Blount couldn’t look any sharper. 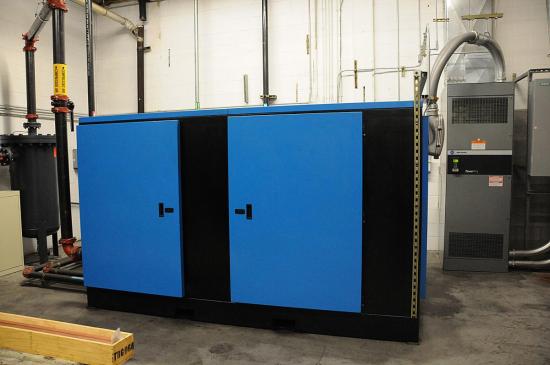 “The expertise that Energy Trust brought to the table through its Industrial Energy Improvement initiative really helped us to understand where to focus our efforts,” said Jason Smith, corporate environmental engineer, Blount International. “We learned which energy-efficiency projects were the most cost effective, and Energy Trust provided more than \$130,000 in cash incentives, which made the difference in whether several of our projects penciled out.”

Industrial Energy Improvement is a year-long behavioral and process-related training initiative in which participants such as Blount work closely with Energy Trust technical service providers. As part of Industrial Energy Improvement, Blount’s energy management team learned how to analyze their energy bills and came to understand exactly where and when they use energy on a cost per unit of output basis. Next, they engaged in no- to low-cost energy improvements, particularly related to operations and maintenance in Blount’s compressed air system. 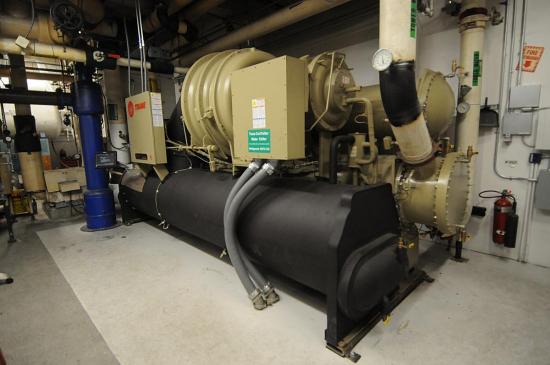 Energy Trust arranged for engineers at Portland General Electric’s Customer Technical Services to provide free energy studies, such as a compressed air study showing that Blount could save a considerable amount of energy and money simply by repairing leaks. The report also recommended installation of valves that automatically shut off the flow of compressed air when specific pieces of equipment were not in use. 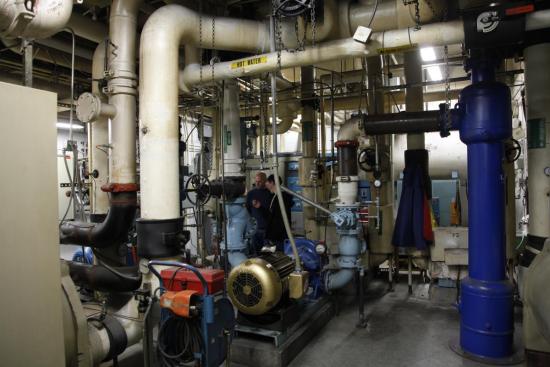 Now Blount boasts a well-established corporate-wide commitment to energy efficiency. The energy management team for the Portland and Milwaukie facilities has representatives from manufacturing, purchasing, engineering, management and facilities maintenance—every function that can impact plant energy use. The team has integrated energy management into ongoing decision making and is looking for the next level of “low-hanging fruit” in terms of energy-saving projects.

Because Portland is headquarters for Blount International, the energy-efficiency efforts at its Oregon facilities are now leading the way for Blount’s facilities across the globe. Blount’s three U.S. facilities have joined The ENERGY STAR® Challenge for Industry, which is a nationwide challenge to improve the energy efficiency of U.S. industrial sites by 10 percent within five years.

“Companywide, we now have a monthly energy conference call with all of our sites participating,” said Smith. “We’re taking the information and strategies that we learned from Industrial Energy Improvement and pushing it out to our other plants. You could say that Energy Trust efforts haven’t just helped our Oregon facilities, but are helping all of them.” 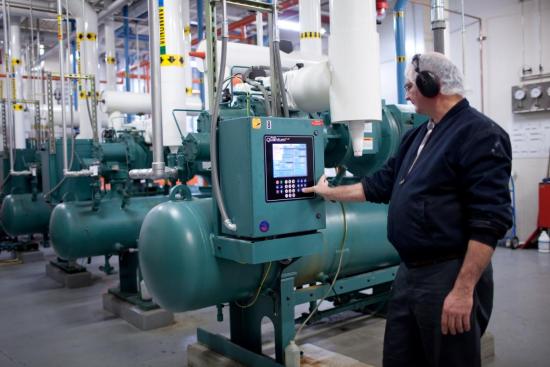 With 110 tasty flavors of frozen desserts and beverages, YoCream International, Inc. is all about production quality. Now the 35-year-old company is applying that same high-quality approach to saving energy in its Portland-area manufacturing plant.

Since 2006, YoCream has meticulously worked to trim its operating costs and improve its environmental impact.

When increased demand for its products required YoCream to install a higher capacity freezer, the company looked to Energy Trust of Oregon to help select the most energy-efficient equipment available. Energy Trust performed a detailed engineering analysis, at no charge, that recommended a 10,600-square-foot freezer with variable frequency drives (VFDs) on compressors, condensers and evaporators. Fast-closing doors keep cold from escaping, and heat recovered from compressors provides underfloor heating. YoCream can conveniently maintain the freezer’s temperature from a computer at the office or remotely. A \$105,265 cash incentive from Energy Trust helped defray some of the project cost.

Success with the freezer prompted YoCream to turn to Energy Trust again when expanding its refrigeration system. After conducting a thorough study of the system, Cascade Energy, an Energy Trust Program Delivery Contractor, recommended a new energy-efficient, 300-horsepower compressor with VFD, energy-efficient condenser, VFD-controlled condenser fan and sophisticated computer controls. This project dished up more than 500,000 kilowatt hours and a \$74,673 Energy Trust incentive. 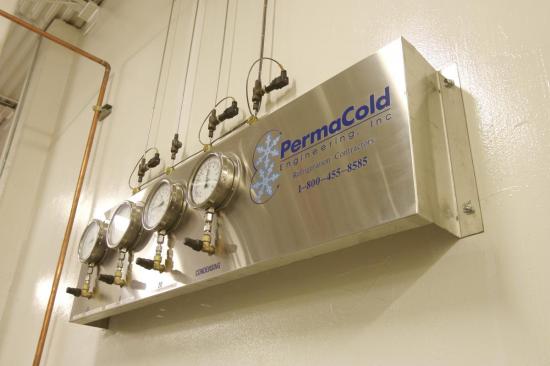 “Energy Trust’s involvement helps with our decision making,” said Clayton Eberle, chief engineer, YoCream. “Their reports include recommendations that might not have occurred to us. The cash incentives, together with detailed estimates of project cost, savings and payback, are useful when seeking upper management approval.”

Recognizing that energy efficiency is not only about new equipment, YoCream is committed to fine-tuning the equipment it has. As part of Energy Trust’s operations and maintenance offerings, Cascade Energy monitored YoCream’s compressed air lines to identify leaks that needed attention. “We noticed a difference as soon as we began repairing the leaks,” said Eberle. “Our energy savings went up, and noise levels went down because the compressor wasn’t working as hard.”

A year later, YoCream was back for more—this time to make operations and maintenance improvements on its refrigeration system. Energy Trust calibrated refrigeration sensors and showed YoCream how to adjust the set points to the central refrigeration control system. YoCream also learned that a pump on the cooling tower was running continuously, a problem resolved with new controls. These no- or low-cost activities earned another \$4,800 incentives, for savings of more than 202,801 kilowatt hours.

“Upkeep on the refrigeration system is now up to us,” said Eberle. “We’ve entered all our set points into a spreadsheet and have a schedule to calibrate the sensors every six months.” 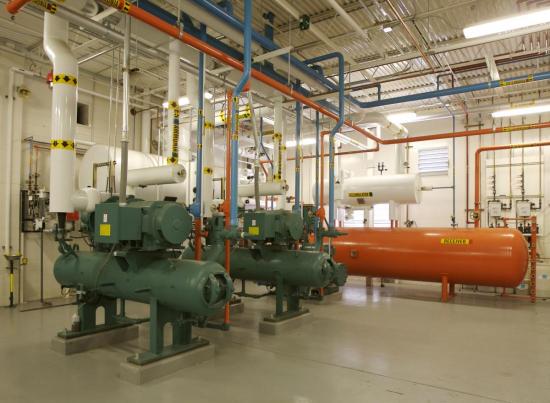 “We’ve made energy efficiency a part of the job at YoCream,” summarized Eberle. “Our personnel are actively involved in monitoring energy use. It’s a lot about documentation. Employees like it because it’s a great chance to walk around with a clipboard and check equipment settings.”

All photos courtesy of Energy Trust of Oregon. To learn more about energy efficiency for industrial facilities, visit www.energytrust.org or call 1.866.368.7878.