An advanced car manufacturing plant in the Western half of the U.S. is living up to its goal for a greener future, thanks to an extensive compressed air system audit followed by the implementation of advanced control technology and airflow meters for ongoing monitoring and measurement to ensure continued system efficiency.

The project, which also involved the addition of a booster air compressor and receiver tank – along with the installation of an important pressure control valve – gives the automaker the ability to run fewer centrifugal air compressors during peak production. In so doing, the plant saves nearly 6.1 million kWh and more than \$600,000 per year in energy costs. The project also qualified for a \$369,374 rebate from the local utility, resulting in a six-month project payback – all while improving system reliability.

Compressed air is at the heart of production at the manufacturing plant, which spans 115 acres. Compressed air powers pneumatics used to control robots in addition to powering conveyors, and packaging equipment. It is also used extensively in painting, stamping and plastics molding operations.

The air compressor models and ratings are as follows: 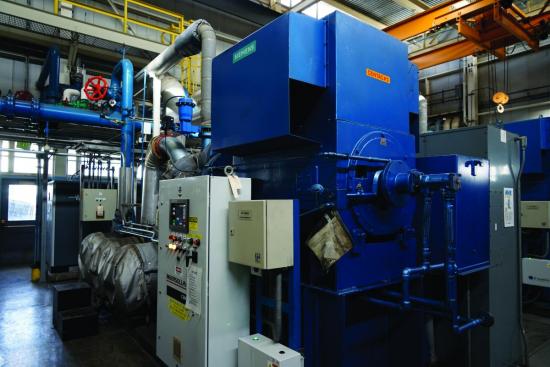 A total of seven Ingersoll Rand centrifugal air compressors are used to power production at a automotive plant spanning 115 acres.

The automotive manufacturer initiated an internal effort in 2016 to achieve energy savings and increase the efficiency of its compressed air system, which at the time cost \$1.6 million per year to operate. The complexity of centrifugal air compressors, as well as the method of controlling them, led the company to seek the support of experts in compressed air systems.

The first step toward achieving plant goals involved a comprehensive audit of the compressed air system by iZ Systems in partnership with ALD, Inc.

To conduct the audit, the team exported data from the plant’s SCADA monitoring system including motor amps, discharge pressure, inlet valve and the blow-off position of each air compressor to determine different operating profiles of the system.  In addition, pressure loggers were placed downstream of the air compressors and throughout the campus to monitor pressure fluctuations and to see how the air compressors responded to changes in demand.

The audit showed the seven 1,250 hp air compressors running on a simple local pressure control system. The controls were not capable of managing the inlet valves and blow off valves discreetly, which leads to PID hunt. As a result, the machines were blowing off a significant amount of compressed air in all operating conditions to protect from surging, which resulted in unloading and loss of plant pressure. Also discovered during the course of the audit were two unique demand periods:

Based on data gathered during a two-week audit period, the team recommended the installation of an automated compressed air system control and monitoring solution, which sequences the operation of the air compressors to match actual demand.

The audit also showed the plant could reduce peak demand with equipment upgrades, which primarily consisted of a booster air compressor together with a larger receiver tank. The team also recommended the installation of VPInstruments’ VPFlowScope DP airflow meters in the discharge line of each air compressor for accurate airflow measurement and ongoing monitoring.

Knowing the project qualified for a substantial utility rebate, the team submitted its audit report to the local utility for review. In addition to their approval process, the Utilities Commission reviewed the audit in parallel to validate the audit methods and energy savings calculations.

More than a year later, the utility approved the project rebate, but required the plant to first install the automated compressed air control system and record four weeks of additional baseline data to further validate the ability to achieve the projected energy savings. Utility commission officials were pleased the team planned to install new meters to gain an accurate comparison of airflow supplied to production versus using older airflow meters already installed on the plant’s compressed air distribution system.

Next, the team installed the iZ Systems Compressed Air Automation and Data Acquisition System at the plant. The technology communicates directly with each air compressor’s main panel and can also acquires data from the air compressor Modbus outputs, or any combination of external sensors for continuous monitoring of the entire compressed air system. The control system enables full control over all air compressors, which is key to optimization of compressed air supply to match the demand profile. The Automation Platform can also be accessed remotely to optimize the air compressor control sequence, if required.

Another key issue addressed at the plant was the existing compressed air system’s inability to effectively manage peak demand events. Specifically, a spike in air demand would cause a pressure drop because the centrifugal air compressors would ramp up too late. This happened because the peak events were too short for the machines to quickly react to increased demand. Further, the situation created a peak in pressure followed by air compressor blow-off.

To increase compressed air system response time, the team installed a booster air compressor together with a 17,500-gallon receiver tank capable of storing compressed air at 250 psi. Given that plant pressure is around 100 psi and tank pressure 250 psi – and the fact that air is stored off line – the storage tank differs from a normal storage tank connected to the main header at plant pressure.

By increasing the pressure in the storage tank, the capacity of the compressed air storage system is more than doubled. The upgraded system also includes the use of a crossover pressure flow control valve, which is controlled by iZ Systems’ automation platform. The valve releases air from the storage tank into the main supply line when peak demand occurs. In so doing, the plant only needs to run two or three air compressors rather than four units to meet peak demand for air. 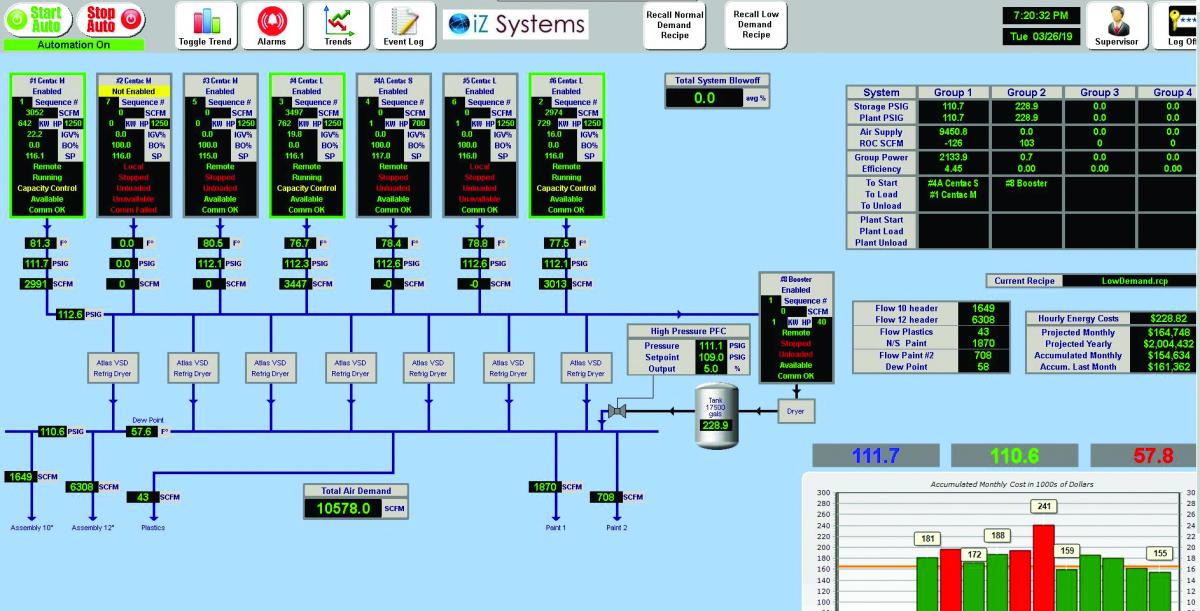 This upgraded system also virtually eliminates blow off from the centrifugal air compressors. In the event of an air compressor failure, the offline boosted storage system provides peak demand flow for over 10 minutes, which gives the automation platform enough time to automatically bring a backup unit online without interruption to plant production.

Another key aspect of the upgraded compressed air system is the ability to continuously monitor and adjust the system as air demand changes for any number of reasons, such as when the maintenance staff repairs air leaks. Ongoing monitoring of demand in airflow also allows decisions to be made regarding changes to the air compressor control algorithm for system optimization.

At the plant, each air compressor is fitted with differential pressure airflow meters, VPFlowScope DP, to measure bi-directional airflow, pressure and temperature. The plant, which appreciated the ease of installation of the new airflow meters, can now track the efficiency of each machine. If issues are detected, such as clogged inlet filters or reverse flow, plant staff can take immediate action and avoid wasted energy and associated costs.  The plant can also detect when a non-return valve in the air compressor is leaking to prevent reverse flow.

In addition, the maintenance team uses a clamp-on ultrasonic transit time flow meter to regularly check the cooling water supply to each air compressor. Improper cooling can dramatically decrease the efficiency of the compressed air system. 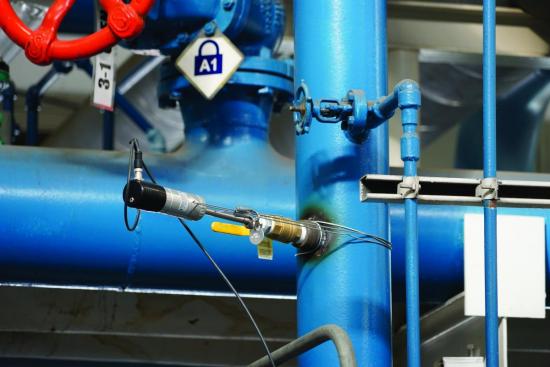 A VPInstruments’ VPFlowScope DP airflow meter installed on each centrifugal air compressor gives the plant the ability to monitor each unit, which in turn, allows decision-makers to improve system efficiencies and maintenance.

The automotive manufacturer initiated its compressed air system upgrade project shortly after utility approval of the audit in November 2018. Implementation of the compressed air automation and data acquisition platform in combination with the upgrades to the system reduces the facility’s annual energy consumption by 6,098,619 kWh per year, resulting in yearly savings of  \$600,000. With the utility incentive of \$369,374, the project delivered a simple payback of six months.

Pascal van Putten is CEO and founder of VPInstruments and has 20 years of experience in flow measurement, compressed air monitoring and industrial energy management. Tyler Costa is Vice President of Operations, ALD, Inc. In the last 10 years he has competed hundreds of compressed air system audits for a wide range of industries.

VPInstruments offers industrial customers easy insight into energy flows. Founded in 1999, it provides complete solutions for monitoring compressed air flow, gas flow and electric energy consumption. Its products can be found all over the world and in a wide range of industrial markets, such as automotive, glass manufacturing, metal processing, food and beverage and consumer goods. For more information, visit www.vpinstruments.com.

ALD, Inc. is the largest compressed air and industrial vacuum audit and technical services firm on the West Coast of the United States. It provides professional compressed air system services with unbiased audit recommendations aimed at maximizing the value of the production throughput. ALD offers turnkey project solutions, and also has contracts and relationships with all major California and Arizona utility companies to offer significant compressed air incentives. For more information, visit www.airleakdetection.net.

iZ Systems has been a worldwide leaders in auditing and design of compressed air and vacuum systems since the 1980’s. The company, which has locations throughout the United States, holds a number of copyrights and patents for advanced logic in compressed air automation. The iZ Compressed Air Automation and Data Acquisition System has built-in data acquisition and provides on-line support for system tuning and management, while providing centrifugal air compressor load sharing technology and pressure flow control compatibility. To learn more, visit www.izsystems.com.

All photos courtesy of VPInstruments.