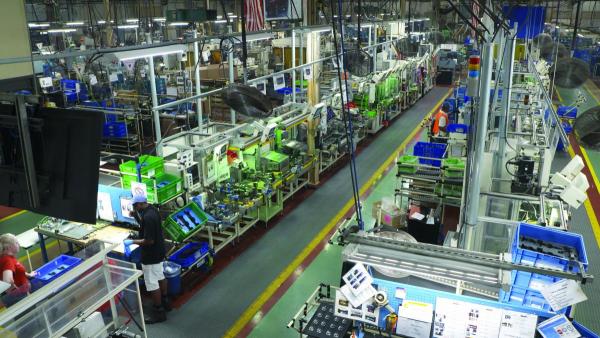 A system assessment gave Douglas Autotech the ability to not only ensure reliable compressed air at its plant in Hopkinsville, Kentucky, but also save \$105,000 in energy costs during the first year of operation.

That’s the approach Douglas Autotech Corporation (http://www.douglasautotech.com/) took at its Hopkinsville, Kentucky, plant when the company’s aging compressed air system needed more than just routine maintenance. And the decision paid off for the manufacturer of steering columns for some of the world’s leading brands of on-and off-road vehicles.

A system assessment conducted by EVAPAR, the local compressed air services provider, followed by the installation of a lubricated, rotary screw Variable Speed Drive (VSD) air compressor and other improvements, allowed Douglas Autotech to reinforce the reliability of compressed air at the plant while netting \$105,000 annually in energy costs.

Douglas Autotech is a world-class manufacturer of directional control systems, such as steering columns, for the international vehicle industry with a rich history dating to 1902 when it began making parts for Henry Ford’s Model T. Today, the company manufactures systems for heavy- and off-road vehicles at its headquarters in Bronson, Michigan, while its plant in Hopkinsville manufactures similar systems for cars and light trucks.

Products manufactured at the 100,000-square-foot plant in Kentucky include columns, I-shafts, covers, keylocks, and other dressings, along with shifter applications, such as straight, tap-up/tap-down and gated shifters. In all, the facility supplies automakers with products used in more than 100 different applications, all of which are designed keep vehicles operating safely, smoothly and reliably. 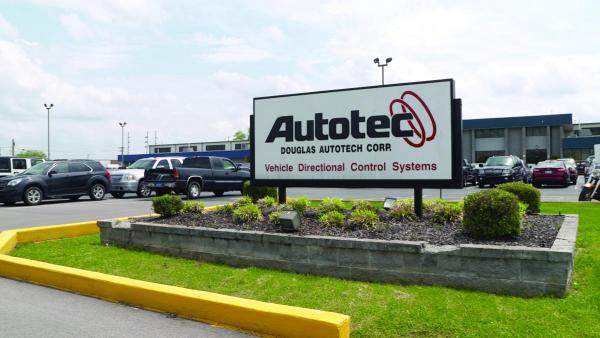 Compressed air plays a crucial role in the plant’s assembly process by powering a host of cylinders, clamps, valves and actuators used in pneumatic production equipment, as well as handheld tools such as torque wrenches. Other uses of compressed air include shot-blasting and painting operations.

Brett Barrett, Engineering Technical Manager at Douglas Autotech’s Hopkinsville plant, said the reliability and consistency of compressed air is imperative, especially when it comes to its precision assembly process and its impact on productivity.

“Most of the machines have a pressure switch on them and if the pressure is not in the correct range, the machine is not going to operate,” Barrett said. “There is no workaround. It has to be operational.” 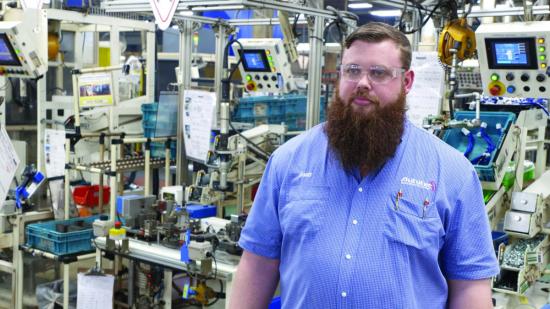 Like many manufacturing operations, the Hopkinsville plant adapted its compressed air system throughout the years to meet increased demand for compressed air as the plant expanded and boosted production to keep pace with steady growth.

Over time, the plant’s compressed system grew to include three, lubricated fixed-speed, rotary screw air compressors including one 300-horsepower (hp) unit rated to deliver up to 1,206 scfm and two, 100-hp machines rated to deliver up to 366 and 424 scfm, respectively. The original system also included a refrigerated dryer rated at 3,000 cfm and two, 1,060-gallon air receiver tanks.

Barrett said the Hopkinsville team regularly looked to outside companies to maintain its compressed air system through preventive maintenance programs. Yet age and ongoing wear and tear continued to show up in the form of ongoing overheating issues, pointing to a system upgrade.

“We switched between a couple companies for preventive maintenance programs where they would service the system every three months, but it got to be where we started to think, ‘There’s a lot more than three months’ worth of issues here.’ So we started shopping for air compressors. We weren’t really looking for cost improvement as far as energy costs are concerned; we had a lot of maintenance issues to address.”

In Search of a Strategy

While maintenance issues drove the decision to closely evaluate the compressed air system, Barrett said the Douglas Autotech team also knew efficiencies could be realized based on work done from time to time to address air leaks and by having a thorough understanding of the value of overall system control.

“I think part of the problem we experienced was the absence of a strategy,” Barrett said. “The 300-hp air compressor could pretty much sustain the plant on its own, but it wasn’t working in tandem very well with the other two air compressors.”

The team wrestled with the exact strategy to deploy given how the compressed air system evolved over time, Barrett said.

“We had a control system that was supposed to ramp up and down the two, 100-hp air compressors and manage the air, but we struggled to get that to work properly and that left all 500 hp worth of air compressors running around the clock,” he said. “It had been like that for so long it just became normal.”

Another vexing issue for Douglas Autotech was an occasional issue of pressure drop. Many had different opinions as to the air pressure setpoint to satisfy the need for plant air throughout the plant.

“We were running the shop air at about 110 psi,” Barrett said, adding that some suggested the need to add an air compressor to avoid problems with pressure drop. “This is something that happened over time and eventually you’re not sure what to believe,” he said.

“The study they did,” Barrett said about the decision to partner with EVAPAR on the project. “No one else offered to do anything like that, and honestly, a least a couple of vendors didn’t have the capability.”

As an authorized Atlas Copco distributor, EVAPAR used Atlas Copco’s AIRchitect Survey data logger to monitor and measure the output of the plant’s air compressors during a one-week period. Doing so provided insight into the system’s electrical usage based on the amp draw of each air compressor during the one-week period. Using pressure monitors, EVAPAR also gained an accurate picture of pressure delivered to the plant.

Data logging demonstrated the ability of the compressed air system to easily satisfy the plant’s need for air during the workdays with demand fluctuating between approximately 600 cfm and 1,500 cfm during normal workhours based on the ups and downs of production activity. Yet the assessment also illustrated immediate opportunities for efficiency improvements – confirming Douglas Autotech’s view of the situation, said Adam Cartwright, Territory Manager, Compressed Air Systems, EVAPAR.

“One of the 100-hp air compressors ran unloaded for 122 hours,” Cartwright. “But it was throttled all the way back so it wasn’t really doing anything for them. It was just a 100-hp motor running and it’s not making air since the 300-hp unit was actually taking care of the plant.”

Aside from the unnecessary consumption of energy, EVAPAR also assessed system pressure in the compressed air pipeline and determined something needed to be done about pressure drop. The assessment pointed to issues with the piping system layout and the diameter of the piping itself.

Based on the assessment, EVAPAR recommended a system upgrade to address energy consumption and tackle issues with pressure drop – in addition to eliminating maintenance challenges with the aging air compressors.

The project included the installation of an oil-injected, 300-hp Atlas Copco GA 250 VSD rotary screw air compressor, and the removal of the two, aging 100-hp air compressor units. This meant the new air compressor, rated to deliver up to 1,900 scfm, would be used alone to satisfy the plant’s demand for air at all times, while the original 300-hp, fixed-speed air compressor would serve as a backup machine.

Cartwright said the VSD air compressor is well suited to Douglas Autotech’s compressed air usage since it regulates the speed of the motor, which in turn, ensures it only generates enough power to meet demand for air at any given period and no more. 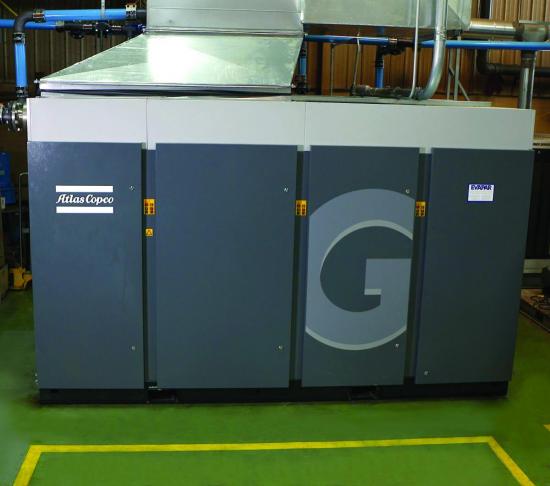 “While the plant used more air during the first shift Monday through Friday, they weren’t using as much air on second shift or during the weekends. But their original air compressor setup was in no way compensating for that,” Cartwright said. “That’s where the variable speed technology really shines.”

Barrett said the plan for installing the 300-hp, VSD air compressor was a better solution than the Douglas Autotech team originally envisioned.

“We thought we could maybe just add another 300-hp air compressor and then be able to have one of them up while the other one is down for regular maintenance and alternate them,” Barrett said. “But we ended up with the VSD unit and it’s proving to carry the plant efficiently and effectively on its own.”

To address pressure drop inside the air compressor room, EVAPAR replaced iron pipe ranging from two to three-inches in diameter with Atlas Copco AIRnet aluminum piping system with a diameter of four inches.

“We did have a couple of places where we had things like an actuator that was probably undersized and because of that we were running the pressure higher. So we fixed those issues and lowered the setting on the air compressor by five psi a week for several weeks until it got down to 90 psi and everything ran okay.”

Compressed Air Energy Use Drops by 53% and is Monitored

The upgraded compressed air system, which includes the VSD air compressor and piping measures to eliminate pressure drop, lived up to the expectations for energy savings as projected based on the system assessment. In the first full year of operation, the system allowed the Hopkinsville plant to save over 1.2 million kilowatt hours (kWh) for a total cost savings of \$105,000. In all, the plant reduced its compressed air power consumption by 53% and plantwide by 20%.

Barrett said it didn’t take long for the Douglas Autotech team to decide to move forward with the compressed air system upgrade based on EVAPAR’s system assessment.

“Honestly, it was a significant enough savings with a quick payback so it was just a matter of  when we could get it done,” Barrett said.

Energy savings aside, the system now ensures a steady and reliable supply of compressed air. In addition, EVAPAR has assumed responsibility for maintenance of the system, which incorporates the use of Atlas Copco’s SmartLink remote monitoring system. The advanced technology provides ongoing insights and early warnings should problems arise.

Essentially, the compressed air system upgrade covers all the bases, Barrett said, adding that Douglas Autotech appreciates taking a strategic approach to addressing issues based on the findings of a system assessment.

“I big part of it is really understanding truly what the demand is, “Barrett said. “With a system like this, you can’t continue to throw more capacity at it. Obviously, this is huge expense, but it’s the best option. It exceeded all the numbers and everything we projected so it’s all positive.”

All photos courtesy of Atlas Copco.