The Ford Motor Company Kentucky Truck Plant (KTP) not only manufactures upscale SUVs and pickup trucks painted in wide variety of stellar, high-quality colors and finishes –  it does so cost-effectively by conserving annual compressed air energy of approximately 9.2 GWh thanks to a major overhaul of the plant’s compressed air system.

Ford, headquartered in Dearborn, Michigan, and a U.S. Department of Energy’s Better Buildings Better Plants Challenge Partner, has committed to reducing energy demand by a minimum of 25% from 2011 to 2021 in its 25 U.S. manufacturing plants. The compressed air project at KTP is just one of many initiatives to achieve its goals.

“We started out focused on putting in a new system to feed dry air to the new paint shop, but as time went on, we decided to upgrade the whole plant. It was a good decision,” White said. 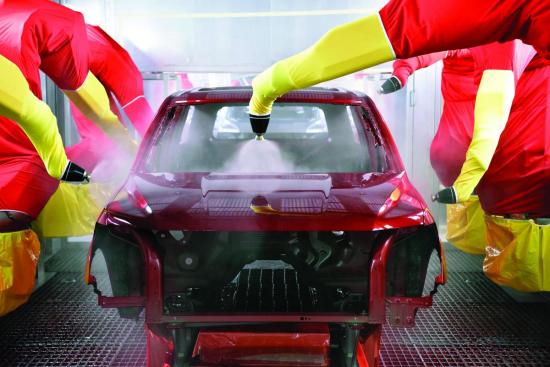 The KTP operation manufactures F-series Ford Super Duty Trucks and Ford Expedition and Lincoln Navigators SUVs. Originally built in 1969, the plant has evolved and grown tremendously with a floor area that has nearly doubled since it opened. At the sprawling plant, 8,920 employees produce as many as 88 vehicles per hour between two assembly lines.

At KTP, production begins when aluminum coils arrive at the plant where they’re stamped into parts and shipped to subassembly. The subassemblies are then conveyed to the body shop for assembly of various parts. From there, vehicle bodies are conveyed to the paint operation. The white bodies are painted and processed through an oven before being sent to final assembly.

The plant regularly upgrades its operation to efficiently manufacture its popular brands of trucks and SUVs. Among the most significant projects in recent history is a new body shop for building vehicles with aluminum body. Another facility built at the same time in 2016 is the new paint plant, which incorporates the use of highly advanced and unique painting technologies.

The strategy involved the dedication of the new paint facility to painting only SUVs, which in turn, freed up the existing paint facility for painting Super Duty trucks. The strategy allowed the plant to boost vehicle production by approximately 15% by total volume. It also addressed ongoing plant-wide goals of continuous improvement and energy reduction.

Just some of the highlights of the energy-efficient paint facility include: 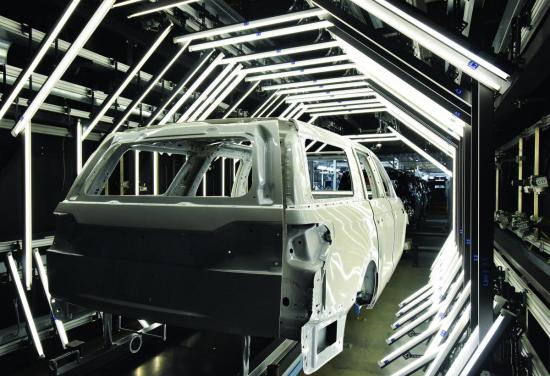 A major consideration when planning the new paint facility was the need for high quality compressed air given its importance to the painting process. Yet, decision-makers wanted the same for the remainder of the plant, which led to a compressed air system makeover.

White said extensive planning led to the decision to upgrade the compressed air system used for the entire plant because other areas of the plant besides the paint operations require clean dry air without fail – and the potential for energy savings were clear to all.

“The new aluminum body shop tooling that was coming in, as an example, needed dry air so rather than installing things in piecemeal fashion we decided to upgrade the entire compressed air system, including the use of desiccant air dyers where we could,” White said.

Melvin could not overemphasize the importance of dry compressed air for the paint plant given the impact on the quality of the paint job and overall productivity.

“Probably 60% of the air is used for the spray booth, which includes the use of a high-speed rotating bell for atomizing the paint,” Melvin said. “Compressed air actually shapes the cone of paint coming out of the rotating bell as it is applied. In addition to the proper pressure the air needs to be really dry to ensure the paint quality. You also don’t want lubricant anywhere near that area.”

With clearly established goals and firm plans in place, KTP and UCA entered into a performance contract that called for UCA to upgrade the compressed air system, maintain it and guarantee the power consumption for the duration of the eight-year contract.

KTP’s original compressed air system included nine aging centrifugal air compressors paired with nine refrigerated dryers to supply air to all areas of the plant. It also included the use of heatless desiccant dryers dedicated to the old paint shop for delivering compressed air at minus 40oF (-40oC) pressure dew point. The dryers used for the paint shop included one dryer rated at 5,000 cfm for the prime painting booth and two dryers, rated at 6,500 cfm each, for two enamel painting booths. Additionally, one dryer rated at 1,000 cfm was dedicated to the paint mix area.

The KTP-UCA team decided to replace the aging centrifugal air compressors with new centrifugal machines, refurbish an existing centrifugal air compressor, and remove the refrigerated dryers, as well as the point-of-use desiccant dryers dedicated to the old paint shop. It also decided to install new Heat of Compression (HOC) desiccant dryers to supply air at minus 40oF to the entire plant with minimal energy consumption. Additionally, the team addressed the cooling system and controls for the compressed air system.

The new compressed air system, which was implemented in a series of carefully planned stages to allow for uninterrupted production, includes: 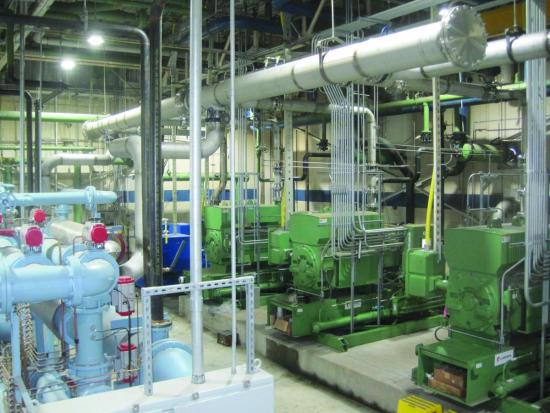 The system is configured so three of the air compressors and dryers supply air to the paint shop at 110 psi and three air compressors and dryers supply the manufacturing facility at 98 psi. The project also included the installation of a 10-inch stainless steel pipe to supply the air at 110 psi to the new paint shop, which is in addition to existing piping used to supply air to the old paint shop and the old and new body shop and remaining plant production areas.

The upgraded system’s master controller maintains constant pressure control at plus or minus two psi and works with a new spillover valve to allow air from the high-pressure side of the system to be routed to the low-pressure side of the system whenever the new paint shop’s demand for air declines. Doing so eliminates the need for the centrifugal units to blow-off air and ensures the optimal number of air compressors operate when needed to meet the demand for air.

White said the compressed air project represents a significant achievement, especially given the need to upgrade the system while ensuring plant uptime.

“This really required a partnership between the KTP plant and UCA and a commitment to a win-win scenario,” White said. “We’ve since standardized on the approach and the technology. Now, if you walk into one Ford plant or the next, you’ll see pretty much the same thing.”

“We entered Better Buildings Better Plants Challenge Partner program knowing it would help us achieve our goals,” White said. “Those types of challenges and programs are important because it’s recognition and a third-party coming in and saying, ‘Yeah, Ford has a good program.’ ”

Ultimately, it comes down to Ford’s goal of protecting the planet by investing in world-class facilities and successful projects like the KTP compressed air system upgrade, White said.

“Ford is very mindful of its impact on our climate and specifically the local environment at our various locations and have established sustainability goals that must be achieved. Given this background, energy efficiency improvements such as were achieved with this project contribute in a big way to those objective,” he said. “We’re very happy with the success of this particular project, and in fact, have replicated the concept at several other Ford locations.”