Driving on U.S. Highway 33, northeast of Columbus, Ohio, I scanned the horizon for a glimpse of Honda of America Manufacturing. Surely from the highway, I’d be able to see the famous Marysville and East Liberty facilities - factories that provide jobs for 2,500 and 4,200 employees respectively. I looked forward to seeing these factories whose 2010 production totals reached 340,000 and 246,700 autos. When I reached my East Liberty highway exit, I had still only seen farmland and the lines of mature trees which form those natural wind barriers I’d grown up with in the Midwest.

I had been invited to visit the East Liberty Auto Plant by Mike Seiter, a member of the maintenance staff on the assembly line. He had told me he was a reader of Compressed Air Best Practices Magazine and that his team had realized some energy savings in their compressed air system. Walking with Mike, in his white work uniform while avoiding silent herds of automatic guided vehicles, I was struck by how quiet and calm the factory floor was – all while Honda CR-V vehicles were being rapidly assembled by people and robots.

“We are close to becoming a zero-landfill facility. Zero-waste is the goal,” Mike explained. Company literature on the Green Factory initiative, coordinated in North America by Karen Heyob, Associate Chief Engineer for Honda of America Mfg., Inc. , says the initiative is designed to reduce the impact of Honda’s manufacturing operations on the environment. This includes efforts to reduce the energy intensity of production, as well as initiatives to reduce waste generation, air emissions, and water use at all of the company’s manufacturing facilities in North America. 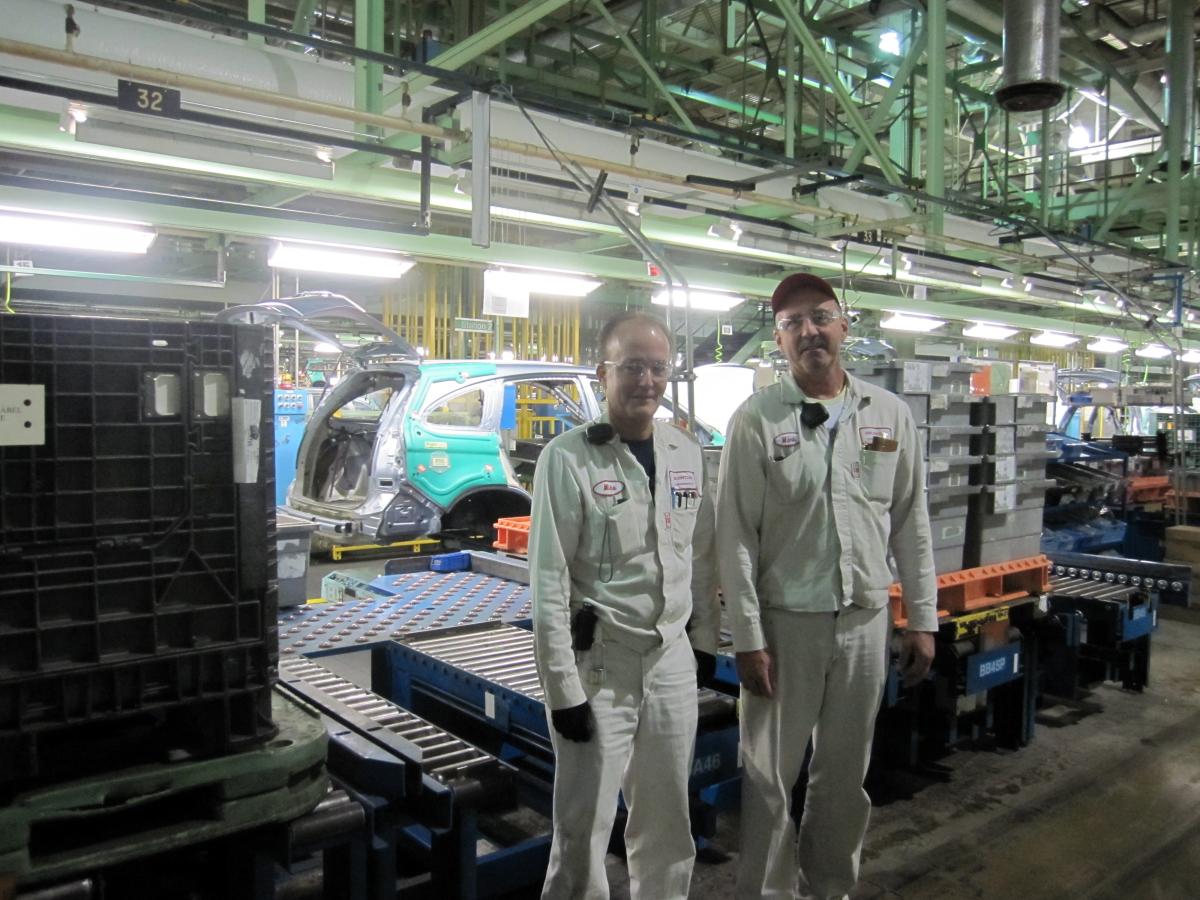 Mike Seiter and Mark Hammond (left to right) stand in front of the CR-V production line.

I quickly learned that this visit was not about Phase I, Phase II or even Phase X compressed air system improvements! Jim Bayer, the Green Factory Leader at the East Liberty plant explained, “We ran five 1000 horsepower centrifugal air compressors with a 450 hp trim centrifugal when plant production reached its current capacity annual capacity of 240,000 automobiles.” Bayer continued, “In 2010, we achieved similar production volumes and we are running only two (2) 1000 horsepower air compressors with the 450 hp trim centrifugal.”

How was this accomplished? “Like with all of our processes, we have continually improved our compressed air system over the years”, said Mark Hammond, also part of the Assembly Maintenance Staff at East Liberty. “We went to a Bay Controls compressed air management system in 2002 and upgraded to their newest version in 2009.”

The team went on to describe how they have established kWh budgets (related to compressed air) for each production area in the plant. Impressed because most plants don’t do this, but cynically thinking I’d catch the guys with backing into these numbers I asked, “How do you know how much air the Assembly area is using?” The quick reply went like this, “We installed thermal mass flow meters to measure actual compressed air flow to the Assembly area and to all other zones of the facility”. “The measurement of compressed air flow, along with power and pressure measurements, displayed on our computers by the Bay Controls management system, has made compressed air another utility we can manage more efficiently.”

Over the years, the team has made continuous improvements to eliminate inappropriate uses of compressed air and reducing artificial demand. Plant air pressure has dropped from an average of 135 psig to the present 113 psig. Actions have included going to electric paint mixers with VFD’s (vs. pneumatic) and blower-powered feather dusters.

Compressed air leak detection has also become a standard procedure at East Liberty. Mike Seiter and Mark Hammond stated that they believe in “find and repair” rather than “tag and repair” in their leak management program. “Our coordinator, Randy Rhine, is key in letting us take the initiative on maintenance projects. We made a crash-cart with all the pneumatic fittings required for minor leak repairs and with our ultrasonic leak gun we “find and repair” the leaks at the same time.” Mr. Seiter continued, “We have read and heard from others that “tag and repair” leak management programs sometimes don’t get past the tagging stage.”

Fine Tuning the Demand Side of the Compressed Air System

Now they really had my attention. I’ve seen a lot of compressed air systems in my career – and only once before had I seen a system this sophisticated (hint-it’s another car manufacturer). What improvements had they now made that they called me in to see? Mike Seiter said, “A big part of our job is to always seek continuous improvements, and we found some in the compressed air lines in the CR-V assembly area.”

The first opportunity was hiding underneath the material delivery systems in the assembly area. Each unit has a pneumatic cylinder actuated by a pneumatic limit switch. Located in multiple locations, these small brass switches were leaking 81 cfm of compressed air. “We went to a one-piece limit switch assembly which costs \$64 per unit (vs. \$268 for the prior unit) and eliminated \$8,000.00 per year of compressed air leaks. This “small” action has reduced our cost per car by five (5) cents.”

The second energy-saving action was on the robotic arms gyrating all around the CR-V’s on the assembly line. The robots (sorry for the name I’m giving them) is to pick up and mount the front and back windshields on the car. Vacuum pumps give suction cups the strength to pick up the glass components and quickly and firmly put them into place. Working together with the vendor, Mike Seiter explained, “PIAB has reduced the compressed air consumption of the vacuum pumps and we have upgraded the systems. The ROI of the project is calculated at 10.4 months.” 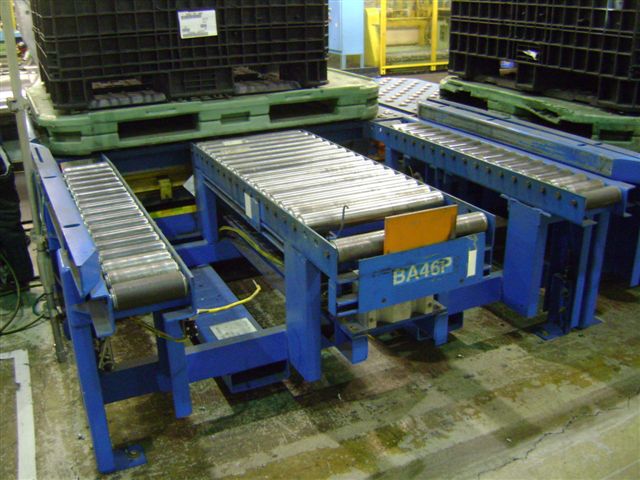 The material delivery systems where the pneumatic limit switches were leaking compressed air. 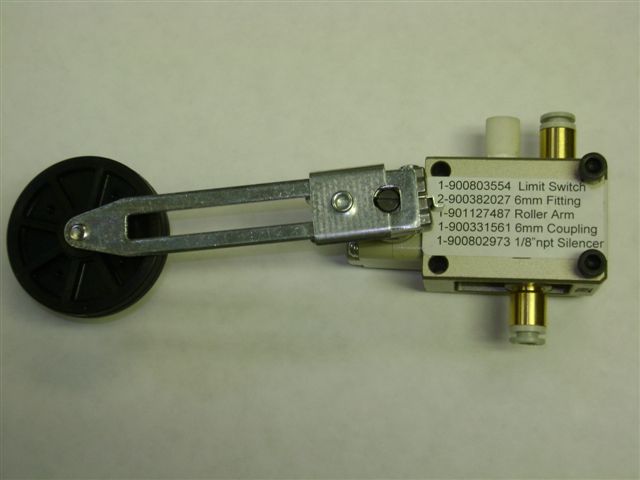 Close-up of the multi-component pneumatic limit switch that was found to be leaking compressed air.

Sometimes you walk away from certain people or companies really impressed and feeling good about having been somewhere cool. This was one of those days for me. The common thread of most compressed air systems is that most of them are a disastrous combination of leaks and pressure drops out in the “Dirty Thirty” last thirty yards of pipe before the end use machinery. Not so with the maintenance staff at the Honda plant in East Liberty. They are fine-tuning an already optimized compressed air system. Congratulations, Honda of America Mfg., for an amazing compressed air system. It’s clear to me that an operation this efficient will continue to employ thousands of Ohioans in the future!