Environmental sustainability and waste reduction are of great importance for automotive parts manufacturer SumiRiko Tennessee, Inc., which is why it decided to upgrade the compressed air systems at its plants in Midway and Tazewell, Tennessee.

In a strategic approach to improving its management of compressed air, the company initiated an upgrade of its compressed air system at its Midway plant. In so doing, SumiRiko Tennessee saves 2.1 million kWh and \$100,000 in energy costs per year at the plant.  Additionally, lower energy use resulted in the reduction in CO2 of 800 tons per year. With a utility rebate, the project paid for itself within two years.

Verification of results at the Midway plant subsequently led to a similar compressed air system upgrade project at the Tazewell facility. The project there resulted in energy savings and reductions in CO2 similar to those achieved by the Midway operation.  The combined savings for both plants is 3.6 million kWh and \$200,800 in electrical costs per year. Together, the two plants have reduced CO2 output by 1,683 tons per year.

The following describes the compressed air system project at the Midway plant and the positive outcomes.

The \$215 million Midway plant, which began operation in 1997, manufactures anti-vibration, high-pressure hoses and soundproofing products for makers of the world’s top automotive brands.  The plant is both IATF 16939:2016- and ISO 14001:2015-certified. 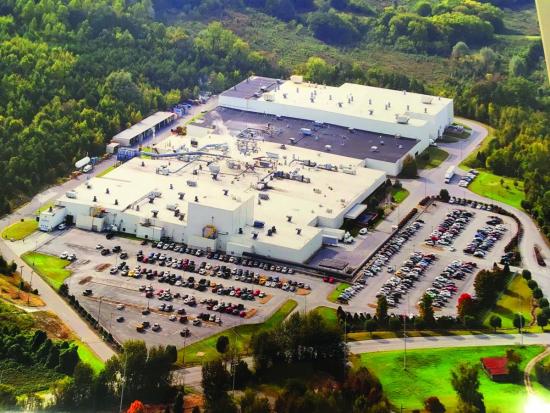 The plant uses two main production processes, one of which is dedicated to the production of hoses, while the second process is focused on anti-vibration products. Key operations include rubber mixing; metal preparation, such as media blasting, phosphate cleaning and adhesive coating; and metal production areas, including stamping, welding, painting, aluminum die casting, aluminum milling and assembly. The Midway plant employs approximately 850 people, the Tazewell plant employs approximately 750 people and both plants operate three shifts, five days per week – and also on Saturdays when dictated by customer requirements.

“We are committed to the protection of the environment and the conservation of natural resources, as well as quality,” Buckner said. “We knew a better approach to compressed air would be one of the best ways to meet our goals.”

SumiRiko Tennessee (http://www.us.sumiriko.com/) is also a member of the Tennessee Department of Environment and Conservation’s Tennessee Green Star Partnership program. The voluntary program recognizes companies in Tennessee committed to sustainable best practices. (Read more about the program at www.airbestpractices.com/sustainability/energy-incentives/incentive-program-profiles/shining-spotlight-manufacturing-sustaina.)

As with most manufacturing plants, compressed air plays a vital role at the Midway facility.

The plant’s compressed air system includes 14 air compressors located in various locations of the facility. The system powers pneumatic valves and cylinders used to actuate 850 machines and numerous assembly cells. The plant also relies on compressed air for its wet blasting and adhesive coatings operations, as well as painting for various parts.

Production areas of the plant requires 5,556 cfm of air to maintain pressure, while the wet blast machines alone require approximately 1,035 cfm of air. Plant-wide, the peak demand for air is 6,591 cfm.

Before the compressed air project, the main compressed air system used for production areas consisted of three, direct-drive 200-horsepower (hp) rotary screw air compressors, each of which is rated to deliver up to 880 scfm at 125 psi, and one direct-drive 300-hp rotary screw unit rated to provide up to 1,206 scfm at 125 psi. Each air compressor package is equipped with a built-in refrigerated air dryer and filtration to provide clean, dry air.  The original system also includes a 1,600-gallon receiver tank for compressed air storage. 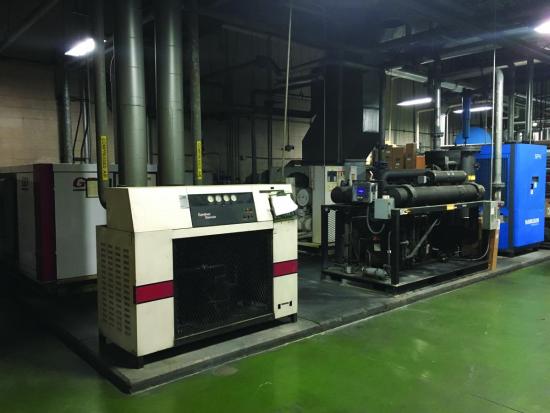 Bucker said any loss in air pressure anywhere in the plant is unacceptable since it threatens the ability to meet production goals. The production and assembly areas are excellent examples of the need for reliable and consistent compressed air at the proper pressure, he said.

“If a sensor detects a drop in pressure below the level required on any given machine, it triggers a machine shut-down. It’s absolutely vital for the system to deliver sufficient air at the proper pressure to the thousands of cylinders and valves in order to achieve our cycle times, which in turn, allows us to maintain production goals and our commitments to customers,” he said.

In addition to reliable air at the required pressure, Midway must have clean and dry compressed air for production and painting processes, Buckner said.

“We can’t allow contaminants or moisture to get into the valves and cylinders used throughout the plant to maintain uptime and to ensure our machines operate at peak performance,” he said. “We also count on clean dry air for electrostatic and other painting processes. It’s essential for the paint to properly adhere to surfaces of the parts we’re producing and for those parts look the way they need to look.”

The Midway plant’s five wet blasting operations also dictate the delivery of reliable compressed air. For wet blasting, compressed air is used in combination with liquid to blast an abrasive media on metal parts prior to the curing and adhesive process, and in advance of assembly. Clean parts are critical for adhesion. Reliable air is also essential for wet blasting since it powers machines involved in the process and also conveys parts from one step to the next.

While reliable and clean, dry air is essential at the Midway facility, SumiRiko Tennessee knew it needed to optimize the compressed air system to lower energy costs and reduce its carbon footprint.

“We were running all of our air compressors at full capacity, 24 hours per day and five days a week to maintain pressure throughout the plant at 98-100 psi,” Buckner said. “We would then manually turn off some of the units on weekends, but we knew we were producing more pressure and using more energy than we needed.”

A compressed air audit of conducted by iZ Systems, based in Macon, Georgia, demonstrated the plant could achieve its goals through a combination of system upgrades, as well as measures aimed at reducing compressed air demand. Changes would also further increase the reliability of the system.

Following the audit recommendations, the plant added a Variable Speed Drive (VSD) 300-hp air compressor to the main compressed air system. The unit, which is rated to provide up to 1,607 scfm at 125 psi, is also equipped with a refrigerated air dryer and filtration. In addition, the plant installed a 5,000-gallon receiver tank for additional compressed air storage. It also installed a pressure flow controller to better regulate airflow and made modifications to the piping system to accommodate the changes. 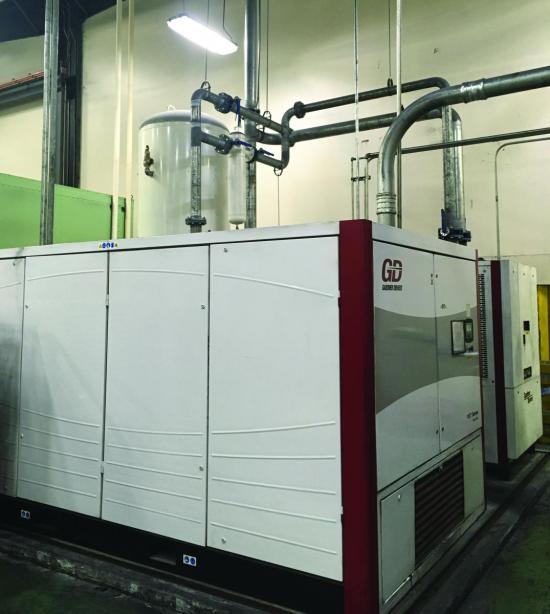 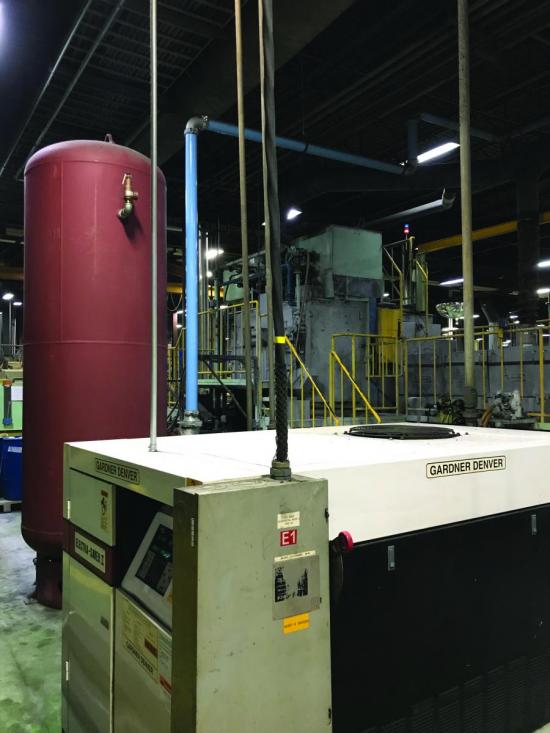 As part of its compressed air system upgrade at its Midway plant, SumiRiko Tennessee installed a 1,000-gallon receiver tank to provide additional compressed air storage for its wet blasting operation.

The compressed air equipment upgrades at the plant support the need to ensure the availability of compressed air at the proper pressure – yet SumiRiko Tennessee also focused on a better method of control of its compressed air systems.

Toward that end, the plant installed a master control system to automatically monitor and balance the operation of all 14 air compressors used for both the production areas and wet blasting operations.

Now the system automatically controls the air compressors so they operate at peak efficiency levels and deliver the right amount of air to meet demand, resulting in energy savings since not all of them operate at full capacity at all times during normal plant operations.  Importantly, the compressed air system is no longer working overtime to provide compressed air at unnecessarily high pressure.

“We’re saving substantial energy since the control system manages the output of the air compressors in conjunction with the additional receivers without under-or over-working any of them as they supply the plant with compressed air at 90 psi,” Buckner said. “We’re also no longer guessing which compressors to manually turn off when demand is low. Our investment in the control system is something we needed to do.”

Another must for SumiRiko Tennessee’s Midway plant was to lower demand for compressed air where possible.

The plant did so by eliminating the use of expensive compressed air to dry off hoses after they’ve been extruded and cooled off in vats of water. Before the compressed air upgrade project, the plant used compressed air delivered at 98-100 psi and routed through ball valves to blow off the hoses ahead of the powder-coating process.

Based on the compressed air audit, however, SumiRiko Tennessee took a less energy-intensive approach. Specifically, it installed six low-pressure blowers designed to deliver 15-20 psi each for the hose-drying application, in turn, eliminating open blowing with compressed air.

Buckner said the plant also began to more proactively address compressed air leaks. Shortly after the completion of the audit, it fixed enough air leaks to reduce demand by 300 CFM. The plant has also implemented a program to regularly identify and fix air leaks.

“You’re going to experience leaks at any plant where you have thousands of valves and cylinders, many of which are connected with fittings and plastic tubing that can be as small as six millimeters in diameter – addition to all of the other places where leaks normally occur,” Buckner said. “Nonetheless, we’re committed to regularly fixing compressed air leaks since it’s an area where we know we can eliminate waste.”

Following the completion of the compressed air system upgrades and measures to reduce demand for compressed air, the amount of energy used for compressed air at SumiRiko Tennessee’s Midway plant dropped from 10,520,243 to 8,396,389 kWh per year. By saving 2,123,854 kWh in energy the plant’s annual electric bill is \$100,000 less. The project has also allowed it to reduce it CO2 emissions by 800 tons per year. Additionally, a utility rebate from Tennessee Valle Authority of \$104,000 led to a payback in less than two years.

It didn’t take long for the SumiRiko Tennessee’s Tazewell plant to adopt the same best practices for compressed air after seeing the results produced by the Midway operation. Similar measures taken at the plant allowed the facility to save 1,504,478 kWh per year and reduce is annual electrical costs by \$100,800. The project also allowed it to reduce annual C02 emissions by 883 tons.

Buckner said the company’s approach to compressed air management is all part of SumiRiko Tennessee’s commitment to sustainability and waste reduction as it continues to produce quality automotive components.

“We’ve definitely learned you don't have to run all your air compressors around the clock to meet production goals,” Buckner said. “This has been a successful project that gives us the ability to meet our customers’ needs and do it in a way that protects the environment. We’re looking forward to even more improvements.”

All photos courtesy of SumiRiko of Tennessee.