For Imerys S.A. there’s little question about the importance of managing dust collection systems it uses to control and reduce harmful particulates in its worldwide minerals processing facilities. And now there’s zero doubt about the tremendous energy savings it stands to save by reducing the amount of compressed air needed for these same dust collectors.

Thanks to a best practices pilot program at the company’s calcine plant in Sandersville, Georgia, the company stands to save upwards of 16 GWh of electricity across North America – and reduce CO2 emissions in the process by more than 7,500 metric tons by optimizing its dust collectors.

Robin Davis of Imerys Performance Mineral Americas and the engineer who led the pilot said it didn’t take long for dust collector best practices to catch on at other plants after seeing the possibilities at the Sandersville operation.

“I was initially looking at this from the perspective of one plant, but I can’t even keep up with how fast this is rolling out and how everybody is taking to it,” Davis said. “Now we’re all thinking, ‘this is a no brainer.’ It’s easy to do and it’s cost-effective.” 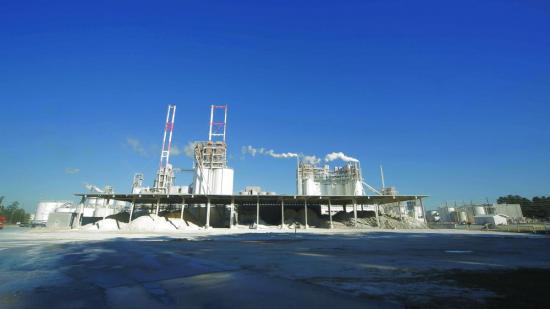 The Imerys S.A. calcine plant in Sandersville, Georgia, implemented a pilot program demonstrating how optimization of dust collectors can save up to 16 GWh of electricity across its plants in North America and reduce CO2 emissions by more than 7,500 metric tons.

The dust collector pilot program at the Sandersville plant is one example of Imerys’ promise to take action on climate change and protect the environment.

Based in Paris, France, the multinational company launched its SustainAgility program in 2018 to meet its commitment to Science Based Targets - committed to reducing Scope 1 and 2 greenhouse gas emissions by 36% relative to revenue by 2030 from its 2018 base-year. Imerys, which specializes in the production and processing of industrial minerals for use in diverse manufacturing and construction industries, operates 230 industrial facilities across 50 countries. The company, which employs 19,000 people, operates 40 plants in North America.

The sustainability program at Imerys includes “I-Nergize” teams dedicated to finding and implementing initiatives aimed at energy and C02 reduction. The teams, which are divided between The Americas, Europe, Middle East and Africa (EMEA) and Asia, work with various processing plants to conduct regular energy assessments and identify energy-savings opportunities. Each plant subsequently implements any number of projects based on the roadmap established, along with continued help from the corporate team when needed.

The goal, said I-Nergize team member Davis, is to identify energy savings that can be achieved with little to no cost, or with projects that have an attractive ROI.

Imerys Performance Minerals North America extracts different types of minerals at its mines, which are then processed for use in a wide range of industries and applications including construction, hygiene products, paper, paint, plastic ceramics, telecommunications and beverage filtration.

At its processing facilities, Imerys relies on compressed air for conveying materials, as well as powering a host of pneumatic systems and devices. By far the biggest user of compressed air are the plants’ baghouse dust collectors, which filter, separate, and capture dust and particulate matter in various processes and then release clean air. The dust collectors play a critical role in the company’s ability to maintain environmental compliance, while helping it maintain product quality.

A typical compressed air system at an Imerys processing facility includes any number of rotary screw air compressors and the occasional centrifugal unit, combined with wet receiver tanks, and dryers. The configuration of each compressed air system is dependent upon the size of the operation and the minerals processed. Additionally, the setup for each system differs from plant to plant. 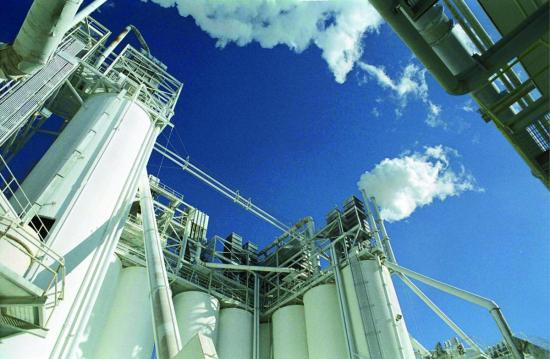 Imerys Performance Minerals North America extracts a wide range of minerals at its mines and processes them for use in a host of industries and applications.

World-class is the aim of the Sandersville operation, which uses a calcination process to produce kaolin clay. The clay is used in numerous products such as paper, rubber, and paint. When the plant experienced problems with the reliability of several pulse jet dust collectors, Davis and plant decision-makers dove in and formulated plans for a pilot program aimed at optimizing the dust collector systems.

“It’s how the plant did it for 20 years,” he said. ”It’s the old adage of, ‘If you’ve got pressure at 80 psi, 90 psi is better, and if you have 90 psi, 100 psi is better.’ Of course, that might be able to help with leaks, but it really just helps cover them up. And after we talked with some of our vendors, we realized too much pressure can cause problems in terms of reliability and the life of the dust collector bags.”

The team discussed whether to reduce the level of compressed air pressure at length but couldn’t agree on whether to lower it. Ultimately, the plant manager opted to experiment with the concept of lower pressure as part of the pilot program. The experiment meant shutting off one of the plant’s seven air compressors, which in turn, lowered the pressure supplied to the plant from 100 psig to 85 psig. It also meant gauging the reaction of those on the team against lowering pressure.

One day of shutting down one of the plant’s air compressors led to several more days of having the machine offline and operating at lower pressure – all without any complaints. Afterwards, Davis shared the results of the experiment with the full team at the plant, some of whom were not aware that pressure had been lowered.

“Once the group saw the data and the technical information about how we shouldn’t be pulsing the bags at 100 psi anyway, things started to click,” he said.

As part of the pilot at Sandersville, Davis and the team also explored various methods of pulsing compressed air to clear the bags, as well as technologies used to do it more efficiently.

Research led to the installation of differential pressure monitors in place of manual gauges and the implementation of a pulse-on-demand approach for managing various dust collectors. The approach includes the use of electronic timers installed on each dust collector system and tied to a Programmable Logic Controller (PLC), which in turn, initiates pulsing and stops it when it’s not needed based on differential pressure settings.

“In a lot of cases, for example, we have dust collectors that are primarily used for environmental compliance and they don’t see a lot of material, which means we might be able to reduce the pulsing by as much as 70%,” Davis said. “That’s a 70% reduction in energy consumed for that dust collector and we’ve extended the bag life. It’s a no brainer.”

The use of differential pressure monitors also allows the plant to measure the performance of dust collectors and make ongoing improvements for the purposes of environmental compliance, in addition to providing troubleshooting capabilities to help bolster plant uptime.

“If we find we didn’t get a good number on one of the dust collectors for a given week we just pull the history on it,” he said. “The plant can also make the necessary adjustments to achieve efficiencies and strengthen system reliability.”

The pilot program also considered efficiency of pulse valves used on the dust collectors. More research led to the installation of a newer valve design that uses spool technology rather than diaphragm-style technology for pulsing several bags. The technology showed promise for better performance and reduced compressed air consumption.

“The diaphragm on a traditional valve is generally a rubber-type material and it can basically have microfractures that allow air through, which requires a lot more work since less air is getting through. Instead of having that rubber constantly flexing, a valve with a mechanical spool goes back and forth to allow the transfer of air. You get a cleaner, crisper pulse and less air consumption,” Davis said, noting that one collector with the newer valve technology has proven its ability to lower compressed air use by as much as 40% while maintaining bag life. 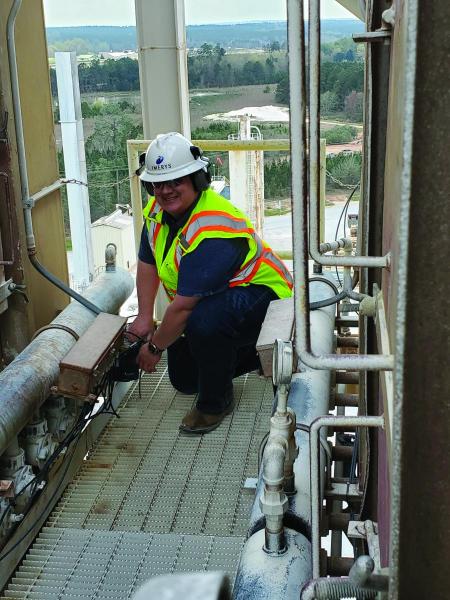 Davis said the dust collector pilot program at Sandersville is in addition to a corporate-wide initiative to standardize on technologies and systems as a way to increase efficiencies, enhance plant reliability, and maintain environmental compliance.

Part of standardization for Imerys means documenting best practices and technologies used to improve energy and plant reliability and making the information easily available and accessible to all Imerys operations.

“You might go to one dust collector system that’s been in service for 30 years and it will have five different pulse valves,” Davis said. “With all of these little design differences you don’t get  as reliable of a system as you could have.”

Davis said another example of standardization to enhance plant efficiencies and reliability is related to the quality of air delivered by any given plant’s compressed air system.

“Introducing water into a dust collector either makes mud or concrete, depending on the mineral. It’s very bad for quality, and plant uptime if we get water in our compressed air,” he said. “So we’re working to address it by doing things like adding water separators to compressed air systems and developing recommendations for target pressure dew points for specific dryers and filters. This is the next big focus area for us.”

The dust collector pilot program has been deemed a tremendous success, which is proven by the results – and the decision to continue implementing dust collector best practices at the Sandersville plant and other facilities.

Results of the program are seen in the ability of the plant to save \$68,000 per year in annual energy savings. In addition, the project earned Imerys a 2020 Better Practice Award from the Department of Energy (DOE) Better Plants® program.

Today, the Sandersville facility typically uses only five of its seven air compressors to supply the plant and its dust collectors with compressed air at 85 psig. It’s also working to implement a capital project to replace all traditional diaphragm-style pulse valves on its pulse jet collectors with the new, spool-style valves. Additionally, it’s moving forward with its pulse-on-demand control system for all of its dust collector systems.

Davis said he’s especially excited about the longer term impact of the dust collector pilot for Imerys and its ability to protect the environment. Toward that end, Imerys has the realistic opportunity to reduce its annual electric use by 16 GWh and eliminate over 7,500 metric tons of C02 emissions by following the same best practices of those in play at the Sandersville pilot and optimizing nearly 600 dust collectors across North America.

“As we implement more and more of these best practices and we start seeing the true numbers, I think our efforts will have a big impact on our sustainability goals. We just have to start applying this across our different sites,” Davis said.

All photos courtesy of Imerys.