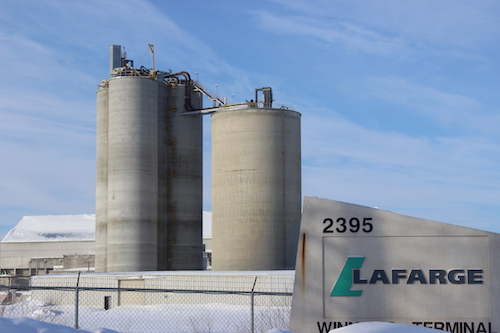 The Lafarge site receives bulk cement powder from the company`s other production facilities by rail car. A receiving facility containing rail car unloading equipment, a dense phase transport system, air compressors to power the transport, and other auxiliary equipment is situated about 1,200 feet by pipeline from storage silo facilities, where the product is distributed in smaller batches for transport by truck.  When rail cars are unloaded, the cement powder is directed into a dense phase conveyor system consisting of two pressure vessels with receiving ports on the top of the vessel, and discharge ports at the bottom.  When a vessel is full, the top is closed by a valve, the vessel is pressurized, and a fluidized plug of cement is transported by compressed air power through a long 6 inch pipe to the final destination in the storage silos.  The system operates by alternately filling and blowing each vessel until the rail car is empty.

The facility previously used two 350 hp rated lubricated rotary screw air compressors to provide the 3,300 cfm of compressed air necessary for the blow.  These compressors, and some auxiliary compressors and fans, consumed about 670 kVa of electrical demand and about 1,000,000 kWh per year in energy.

A few years ago the Lafarge site was subject to a compressed air audit performed by experts from Manitoba Hydro, the local power utility.  The study found that the transport system was consuming about 60% of the total facility kVa demand.  Based on this, an investigation of the transportation system was done to determine the characteristics of the system operation.  Data loggers were placed to measure the air compressor discharge pressure, and the pressure as the compressed air moved into the transport system.  The data showed that while the air compressors were producing air at 90 psi, the actual transport pressure averaged around 25 psi.  A back-pressure valve had been installed to ensure the discharge pressure of the compressors did not fall to lower levels that would cause excess velocity in the internal lubricant separators.  For lubricant style air compressors, having too low a discharge pressure will cause high lubricant carry-over and contamination of the cement.

The lubricated compressors ran at 90 psi, but the transport system average pressure was 25 psi. Click here to enlarge.

Manitoba Hydro`s experts identified this application as a potential area for improvement if new low-pressure air compressors could be used instead.  The pressure reduction at the back-pressure regulator represented a huge energy loss, there appeared to be no need to generate at such high pressure, other than to satisfy the pressure requirement for the compressor separators.  Hydro predicted if the discharge pressure could be reduced, then both the kVa and energy consumption would reduce significantly. "When the old air compressors started we typically saw our lights flicker, they were drawing so much power," said Matt Manness, the Facility Operations Manager. "Now, with the new air compressors we hardly notice, except when it comes time to pay our electrical bill."

Lafarge`s design team investigated the transport process and selected two 300 hp Atlas Copco lubricant-free screw compressors rated at about 40 psi maximum pressure.  The units actually run at a discharge pressure of between 20 and 25 psi for the transport, saving power compared to full pressure.  The supply piping was upgraded to a larger size to ensure low pressure-drop through the full length of the run.  Verification was done by monitoring the system with data logging instruments and the new peak kVa has been verified at 332 kVa, a 50 percent reduction from previous levels, with the new energy consumption estimated at 537,000 kWh.  Overall the electrical cost savings were verified at 46 percent, saving \$63,000 per year.  The project received a substantial utility incentive resulting in a project simple payback of about 2.5 years.

"Not only did we save on power costs, but the new air compressors require substantially less maintenance than the aging units we once had," says Manness. "There is now no need for the frequent lubricant changes the flooded screws required. And, we have a nice new system that will be saving us power for years to come."

Manitoba Hydro`s compressed air expert Ryan Connor indicates that this project came together in a typical way at just the right time.  The energy audit sat under consideration for many years, but it had to wait until the right economic conditions existed before things moved along.  Faced with older compressors requiring more and more maintenance, and rising energy costs, the change to the new air compressors became more attractive when a Lafarge energy reduction initiative spurred action.  “This project is a perfect example of what Manitoba Hydro incentive programs can do for customers – identify energy savings opportunities and provide financial incentives to help lessen the burden of the capital costs,” said Connor. “The verified energy savings were almost identical to the estimated energy savings. This was not only confirmed by direct measurement of the compressors energy consumption but also by a very clear drop on the customer’s energy bill. Often times, people think that producing air at a higher pressure and regulating it down is the same as producing air at lower pressure. Lafarge’s 46% savings in energy shows that’s not the case – substantial savings can be achieved by producing at lower pressure. Don’t use an air compressor to do a blower’s job.”

The original compressed air study identified some additional compressed air related energy savings.  The transport building had two other compressed air systems, one to power a large bag house for pollution control, the other to run various pneumatic operations in the train unloading area.  The study recommended combining the two systems into one by tying the systems together.  A 50 hp load/unload compressor replaced an old inefficient modulating compressor.  A fixed cycle desiccant dryer was replaced by a new single tower heated dryer.  Large compressed air storage was installed in the system to ensure the new 50 hp compressor turns off between load cycles when lightly loaded, instead of running unloaded for long periods of time.

The train car unloading facility only operates for 8 hour shifts during weekdays.  Instead of using a desiccant dryer that uses a flow of compressed air to regenerate the desiccant, the single tower heated desiccant dryer is used because there is extended downtime during night time hours. This dryer contains enough desiccant to dry all the compressed air during the day, and during the early part of the off hours the unit runs a heater and blower to regenerate the desiccant.  Because the operation is off peak, it saves facility peak demand charges and therefore only incurs kWh costs at a lower effective rate.

The installed 50 hp air compressor has a smart control that counts the number of starts and stops per hour. If installed with very large storage, and run with a wide pressure band, these compressors will run start/stop during light loads, saving the additional costs of unloaded power consumption.

Further savings potential at the site is as follows:

A small heatless desiccant dryer was found to be uncontrolled, consuming its full rated purge flow, but only processing a fraction of its capacity.  The dryer had on board dew point controls, but they were not activated.  The unit was adjusted for proper control with a significant reduction in purge flow, reducing the compressor duty and saving power.  Estimated savings for this project was 46 percent with a project simple payback of slightly over one year. 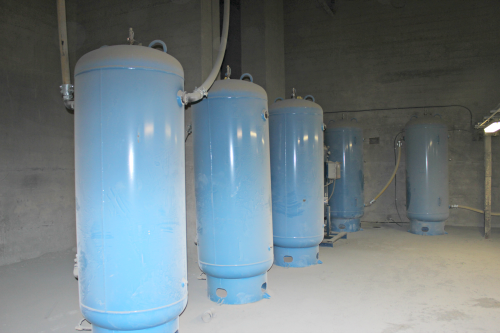 This project is an example of the excellent improvements that can be gained if a compressed air system assessment is done by experts that review both the supply and the demand.  Measurement of energy baselines and pressure profiles are very important in determining if potential opportunities for savings exist.  But just as effective is the understanding of how the compressed air is used.

Many energy organizations and power utilities offer financial support of compressed air studies and, just like in Manitoba,  can also provide support for improvement projects. “Manitoba Hydro’s expertise and financial support really helped start the ball rolling on this project,” said Manness. “And the project really gained momentum once I realized the transport compressors were consuming about 10 percent of our total facility operating costs.”  And it looks like Lafarge’s efforts have paid off handsomely.