Danone today announced, in December 2020, that it has been highlighted for the second year in a row as a world environmental leader by the international non-profit organization CDP, whose disclosure and scoring system is recognized as the gold standard of corporate environmental transparency.

Out of the 5,800+ companies scored in 2020, Danone is one of the only 10 companies that achieved a place on the A List for the three environmental areas covered by CDP of climate change, forests preservation and water security. 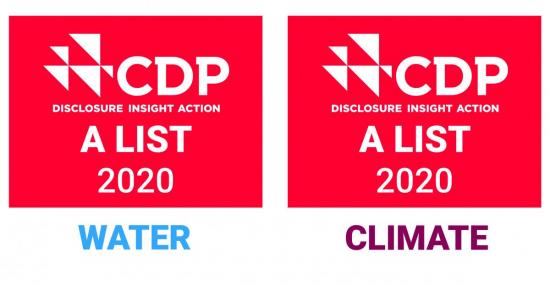 Since its first voluntary environmental disclose to CDP in 2010, Danone has gradually increased its score to reach the Triple ‘A’ list last year for the first time. Being included this year again in these three prestigious lists is a great recognition of Danone’s ambitious and longstanding actions to build a low carbon economy, protect natural resources and increase its brands’ transparency.

Henri Bruxelles, Chief Operating Officer End-to-End Design-to-Delivery, declared: “For the second year in a row, Danone is recognized as a ‘Triple A company’ by the CDP. This is an important milestone and achievement that confirms how our ‘One Planet. One Health’ frame of action and our strategy to focus on grounded and local impact have turned into a deep transformation agenda with major steps taken by our business and brands in 2020: evian and Volvic became carbon neutral from the source to the consumers; the US organic milk leader Horizon Organic set the ambition to become carbon positive in 5 years; Karicare also embarked in a neutrality journey. We launched ‘We Act for Water’ movement, a set of urgent actions to foster the protection and access to water resources. And we created the first ever segregated Palm-Oil supply chain in the U.S. as part as our commitment to eliminate deforestation. I would like to thank all our teams for their dedication and passion in transforming our value chain, inventing a low carbon economy and protecting natural resources. Transparency is crucial to reinforce consumers’ trust in our brands and to provide the financial community with the right tools to assess the resilience and impact of our business models”.