The Wonderful Pistachios and Almonds campus in Lost Hills, California is a manufacturing facility that processes and packages pistachios and almonds for the consumer market. Food processing requires extensive use of compressed air to control multiple applications ranging from actuators, valves, optical sorters, packaging equipment and plant maintenance operations. The campus has its peak season during harvest in late August/early September, but processing and packaging operations take place year-round.

The Wonderful engineering team reached out to ALD, Inc. in an attempt to solve some of the pressure issues plaguing certain production areas and to see if there were any utility incentives available for compressed air system optimization. An audit of the compressed air systems at the Wonderful campus was initiated to determine compressed air system performance during normal operations, provide recommendations for the system, identify energy savings opportunities, evaluate distribution systems and demand applications for optimal performance, while utilizing potential utility incentive money through ALD’s Industrial Compressed Air System Efficiency (ICASE) Program.

Each building had an adequately sized looped header system that ran in an interstitial attic area with drops down to the production equipment, so pressure drop within each building was not an issue. After running flow calculations based on different demand scenarios for each building, it was decided that a 3” header would be the correct size to flow the most worst-case scenarios without over-engineering the system. It would take a total of approximately 2,500’ of piping to connect these five independent compressed air systems and all of the piping work would have to be done while normal operations took place. In order to keep material and installation costs down, while providing high quality piping materials to reduce flow any flow restrictions, it was decided to use a 90mm marine grade aluminum piping system with Victaulic connections. The new header would be easy to install and highly modular for future expansion. 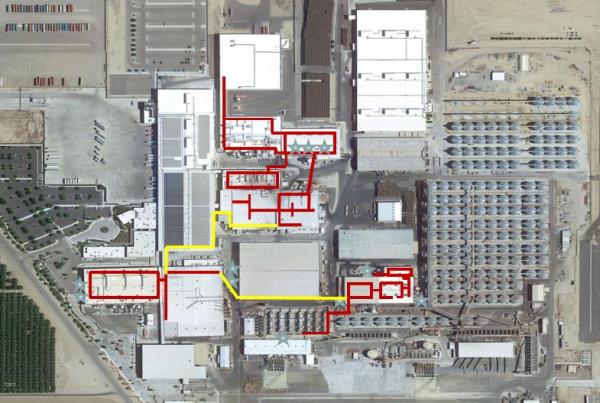 The next challenge was designing a system to efficiently control all eleven air compressors that were each spread over 1,000 feet apart from each other. To further complicate the control scheme, there were pressure flow control (PFC) valves on two of the compressor stations, which would cause control issues now that the systems were all tied together. Instead of recommending large rotary screw or centrifugal compressors to replace a majority of the existing compressors, ALD recommended a robust automation platform that has had a high level of success with campus type layouts like Wonderful. This automation platform would also be eligible for incentive money through ALD’s ICASE program.

The Wonderful engineering team had a strict Allen Bradley specification for their PLC’s and other hardware, so ALD teamed up with iZ Systems and their counterpart Case Controls to design a custom engineered automation platform to control all site air compressors for Wonderful. The standard iZ code can interface to and control as many compressors, of any brand or technology at multiple system pressures as required, without the necessity of any custom programming which can lead to untested and unreliable code. iZ interfaces exist for almost every compressor brand, type, and control vintages including centrifugal, reciprocating, vanes, lubricated and non-lubricated rotary screws, all with electropneumatic, microprocessor, PLC, Modbus, and/or serial communication.

iZ’s wireless cell modem provides security enabled access without impacting the client’s IT department. Technical support and program upgrades, or modifications, can be accomplished without a site visit. This access allows ALD and iZ’s full contingent of experienced compressed air staff to provide ongoing consultation and support for each installed system consistent with our goal of maintaining the gains in efficiency achieved at each facility. The cell modem also provides remote monitoring for corporate or plant personnel via password protected, pre-configured screens without impacting the plant’s network security.

Overview screenshot of the newly installed automation platform showing half the number of online air compressors than were monitored in the baseline. Click here to enlarge.

The automation platform also includes a robust data acquisition system allowing any combination of data to be instantly viewed as real time or historical trends to allow complete analysis of the performance of an individual compressor or the entire system. Every data point is available on one simple screen which is intuitively scaled and zoomed with click and drag capability. For example, compressor power can be compared to its delivered flow and the rate of change in system pressure as it loads to confirm its performance. WPA would now be able to monitor key compressed air system metrics such as compressor kW, discharge and plant pressures, air purification system pressure differentials, system flow and dew point. Additional instrumentation is easily accepted to provide real time monitoring of these parameters as desired. The platform is expandable to monitor and control any other facility systems including cooling water, chilled water, steam generation, etc.

When air compressors are located in multiple locations in a facility, many times it makes sense to set up what is called a “split system”. This is where you have a trim station with compressor(s) located upstream of a large storage tank and a pressure flow control valve. The trim compressors discharge and store air at a higher pressure than the plant pressure. Usually, a pressure differential of 5-10 psid is kept in the tank, called control storage, and the PFC valve will modulate to control the expansion of air down to the lower plant pressure. The rest of the compressors will discharge directly into the plant header at the lower pressure and will run fully loaded or off. This also results in energy savings from discharging at a pressure that is lower than the compressor rating. An upgraded PFC valve was installed downstream of the two 125 HP compressors on the B47 pad, making this the trim station for the system. With the size of this air system, it costs the plant approximately \$3,900 per PSI increase on an annual basis. Pressure reduction is key to energy savings. The other PFC valve that was located on the P1 air compressor pad was removed so that the two 75 HP compressors on this pad would discharge directly into the lower header pressure.

After the new piping had been installed and the automation platform commissioned, ALD performed an analysis on the post-installation data and was able to show a 53% energy reduction in online air compressor power. The automation platform keeps the compressors from running in modulation and also keeps multiple compressors from running part loaded at one time. After these changes were made, Wonderful was able to run on 4-5 compressors during their peak weekday production instead of nine compressors. This also allowed them to have redundancy in the air system and to allow preventative maintenance to occur during the week instead of on weekends, saving additional labor costs. The annual energy savings ended up being 2,729,310 kWh with a peak demand reduction of 312.6 kW. This translates into \$382,103 in annual every savings for Wonderful, who also received an incentive of \$106,075 from the local utility company.

Tyler Costa is VP of Operations for ALD, Inc. who has performed hundreds of compressed air system audits across the country from industries ranging from refineries and forges to food processing and microchip manufacturers.

ALD, Inc. is the largest independent compressed air and vacuum auditing and professional services company on the West Coast. We specialize in compressed air system assessments and design and have the capability to manage turnkey project implementations with guaranteed energy savings. ALD is also a major supplier for robust industrial automation platforms, ultrasonic leak detection equipment/services and many other energy efficient demand side compressed air parts and equipment. ALD administers the Industrial Compressed Air System Efficiency (ICASE) Program in northern and central California and is also a certified third part implementor for many utility companies across the U.S. www.airleakdetection.net.