Steel mills come in many sizes and shapes. Since the Iron Age, man has improved the conversion of iron ore into a myriad of steel products. Thousands of alloys, grades, and shapes are manufactured in specialized plants. Broadly speaking, they can be divided into four categories, by SIC code:

The steel mill in this article is a rolling “minimill,” a facility that melts scrap recycled steel and produces rebar for the construction industry. It fits in SIC code 3310. There are many plants like this all over the world, providing an environmentally sound service and product for their local community. They recycle waste steel from local sources and support local infrastructure projects with rebar, using electricity generated locally.

Besides the huge electric load for the arc furnace (which is an awesome thing to behold!), the next largest electric load in a rebar minimill is the compressed air system. Not only is it a high operating cost, due to large loads to move heavy products, but it is essential for continuous operation of a mill that operates 24 hours a day, seven days a week. As in any heavy manufacturing process, compressed air is the “muscle of manufacturing,” powering automation machinery that does what oxen, men, and steam power used to do. And do it far more humanely, productively and efficiently.

Upgrading a compressed air system project for a rebar minimill is not a simple project. The right team is key to success. Real system upgrades require a real team that maps to the real organization and the plant’s real technical challenges. This article will discuss a comprehensive, \$1.4 million project Compression Engineering tackled.

No business is “perfect,” particularly steel manufacturing. In the United States, most organizations have dual challenges of consolidation and disaggregation at the same time. They are part of a large national or global corporation, which affects policies, practices, and budgets. But they get no central support for making projects happen.

Local plants operate independently from a functional and resource level, yet have corporate oversight that usually hinders more than helps. Historically, most of the early plants built in the United States were individually owned and operated, making decisions about staffing and budgets locally. A plant had a “plant engineer,” whether that person was a degreed engineer or not. A plant engineer in a steel mill was a craftsman of the art of making that particular type of steel. Their job was to optimize production and support operations and maintenance with engineering skill. Often, they had the support of a corporate engineering group with specialty skills. Design of new facility improvements was largely done in-house. If a plant engineer needed to buy something, the process was streamlined for approval and purchase. Vendors and the plant engineer had a flexible teamwork, and everyone knew their place.

Through consolidation, acquisition, and regulation, many steel mills have become loosely aggregated pieces of a large company, with fewer local resources. Smaller plants like rebar plants might not have local engineering. Those large enough to have facility engineering staffs tend to focus them on project management rather than design.

Engineers often are absorbed in non-value-added administration and meetings, making it necessary to outsource engineering design and analysis. However, the purchasing systems of these companies are usually not set up well for outsourcing engineering, and tend to be dictated by the mother company’s policies pushed down on the local plant. They have gotten more and more restrictive on terms and conditions, insurance, safety, etc. This makes the list of companies that can be utilized for outsourced services smaller and smaller. Furthermore, turnover of in-house project engineering staff make it difficult or even impossible to maintain a corporate memory of how systems work (or don’t work) and have been modified.

Two Operations in One

The steel mill discussed in this article is two operations in one, a scrap recycling plant, called “Melt”, and a rebar mill, called “Rolling Mill”. They had no local or remotely available facility engineering staff. However, they have a loyal and technically knowledgeable Rolling Mill maintenance supervisor who was able to get a project approved, and a mechanical supervisor who was able to manage the project.

Melt had their own maintenance management, but stepped back and allowed Rolling Mill to provide them air and run the project. This was key to success. Without centralization of authority and responsibility, the system could have easily become “Balkanized,” with two separate project approvals, systems designs, and projects. Consolidation of decision-making was far better, providing one infrastructure for the entire site, at a maximum reliability and efficiency for all.

The purchasing system of this plant was dictated by a major corporation, requiring terms and conditions that were quite difficult to meet. This caused at least two of the equipment vendors contacted during the audit phase to back out. Fortunately for the plant, the remaining vendor who could comply with the Terms and Conditions (T&C) was very capable. Also, the local plant had enough discretionary funds to purchase some engineering assistance and instrumentation outside the primary contract with the equipment vendor, using very reasonable T&C that a small firm could comply to.

The compressed air system was complex, and ran the entire mill, so all parts of it needed to be addressed at the same time to maximize benefits. The system at this minimill was composed of three 440 hp lubricated screw air compressors, one 6,000 scfm heatless regenerative dryer, 12,000 gallons of storage and an automation system as shown in Figure 1. On an initial scan, this appears to be an efficiently designed system. It has multiple air compressors, controls, adequate storage, and potentially efficient drying. However, a detailed audit revealed there was over 2,175,000 kWh/yr ($149,000) per year of savings opportunity, just in the supply side! 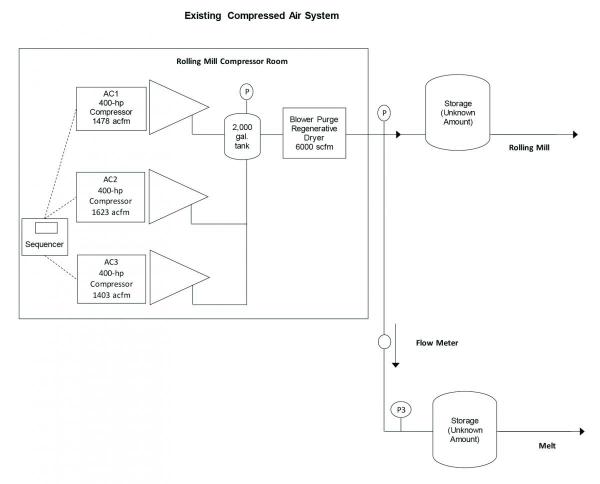 Maintenance management was completely unaware of the energy savings opportunity, and brought in a consultant to attempt to find some cost savings, while addressing their primary reliability concerns:

A future article will describe the audit and findings in more detail. Certainly, there are multiple ways to address the concerns, including repairing and retrofitting the existing equipment. In this case, the mill wanted new air compressors, so a new project was justified on both a maintenance and energy basis.

These challenges were overcome with a new centralized, efficient system design. Savings were verified with our independent audit. The system ended up saving \$136,000/yr in electricity, representing 91% of projected savings. The post-audit flow calculation aligned perfectly with the calculated baseline flow (without dryer purge peaks), so the air compressors were sized to operate in their sweet spots. The improved system has the following components:

Total project costs, including the new compressor room, were about \$1,401,000. A utility incentive was about \$537,000, and the final payback for a completely new, 20-year life system was six years.

How could a complex project like this be identified and approved in less than six months? How could it be accomplished in only 15 months and without an engineering staff on site? There were some key players and other factors that made the difference:

Here’s a chronology of the process that led to the success of the project:

1.     Meetings with utility and DSM program, selection of audit firm

The plant had enough concern about their system that they had planned on hiring a consultant to do a study. When they discovered the consultant would be funded by the utility, a study was initiated. As described, the detailed study resulted in significant findings, which were acted on. Just pausing here to reflect on the value of an independent study, or “audit.” The dryer findings particularly, with their impact on air compressor sizing and reliability, would probably not have been discovered, and air compressors sized to meet the false peak of 4,400 scfm would probably have been sized. A typical study that was part of an air compressor distributor’s sales team would probably not have been done so thoroughly as this was a custom audit. Some air compressor dealers have really improved their audit teams, however, so my bias (as an independent) might not seem fair to some. If you prefer getting an audit from them, I recommend you check with your utility DSM program to get an objective assessment of their capabilities.

After a scoping visit, a detailed plan was developed for the supply-side audit. A plant down time was selected to start the audit, so testing of air compressors and dryers could be done. In an air compressor replacement audit, actual air compressor capacity is valuable to develop, if possible. Since there were no flow meter tap points, an innovative subtractive method was developed. A flow meter was installed on a vent, and each air compressor fully loaded during a steady leak load period, with pressure being constant. The air compressor with highest vent flow was the highest capacity, and was assumed to be at original specifications. The other ones were de-rated incrementally based on the lower vent flow needed to stabilize. In addition, crossover flow between Melt and Rolling was measured with a flow meter, to develop profiles for both sides of the facility.

After the baseline was developed, rigorous models calculated savings for each of the measures. Multi-point curves of performance curves, adjustments for alternate pressure, etc., are part of the analysis. A written report presented findings, savings, system improvements, budgetary costs, and economic analysis. Options for centralized and split Melt/Rolling Mill systems were developed.  Fortunately, the plant chose centralized.

The plant maintenance supervisor contracted with Compression Engineering and their contractor to develop piping, mechanical, and control logic design. This was delivered to Rogers Machinery Company who designed and built custom packages. Special requirements for motors, starters, controls, and remote coolers were incorporated.

The supplier had to manage a complex process of purchasing hundreds of components, many of which had to be specified by engineers who specialize in air compressor system design, and assemble and test large, complex air compressor skids. Rogers Machinery Company did a commendable job. There were some startup challenges and components that had to be replaced, as there are on many complex projects, but they were addressed quickly.

The rolling mill mechanical supervisor did a fabulous job running the construction side.  A new transformer had to be installed, building modifications made, complex piping installed, machinery installed, and controls installed. Great pains were made to make sure the old air compressor system (and a dryer) was available during the testing period of the new system.

Compression Engineering developed plans for and supervised performance tests at Rogers Machinery Company for the air compressors and in the system. The old system was left in place so full off-line testing could be conducted, using false loads. Controls were tuned based on peak and minimum flow, and transitions in between. Dryer switching algorithms were refined and tested. This is an essential part of the process.  Without properly supervised and implemented system commissioning, over half of the savings would have been left on the table. A typical utility-contracted energy engineer (not a compressed air expert) doing typical measurement and verification (M&V) after the vendor was done would not have known how to “commission” the system. We have found that without a compressed air expert energy consultant involved in commissioning, prior to M&V, the project performance will not be achieved as projected.