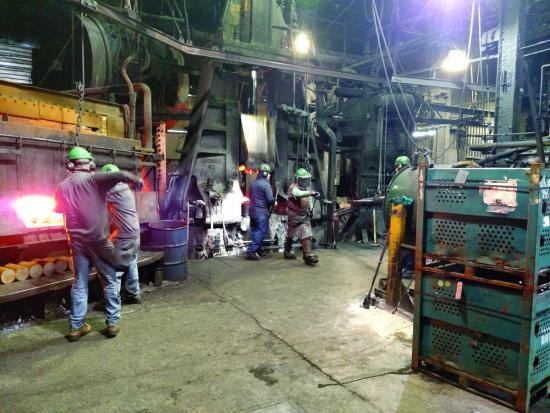 With an eye toward energy savings and production efficiency, PC Forge scored high marks when it decided to re-engineer the compressed air system powering its forging operation in Port Colborne, Ontario, Canada.

Since completion of the system upgrade in the fall of 2020, PC Forge is on track to save an average of 1.9 million kWh and \$266,000.00 per year in energy costs – and increase the production capability of its forging operation by 40%. The project also achieved a one-year payback with a \$245,000 incentive from Government of Ontario’s utility Independent Electricity System Operator (IESO).

Bud Kinney, IMT Forge Vice President, Innovation and Development, and PC Forge General Foreman Ron Reece, said they could not have asked for more from the compressed air system upgrade.

“We’re able to reduce the number of kilowatt hours per year we use and still get increased production capability,” said Kinney. “The project exceeded our expectations.”

Said Reece, “From the production end of things, the difference in the compressed air system is night and day. On a scale of 1 to 10, it’s a 10.” 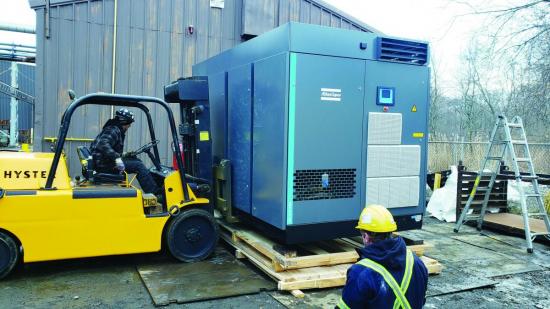 At the heart of PC Forge’s 50,000-square-foot forging facility are five forging hammers weighing between 2,000 to 8,000 pounds each. The hammers, which are powered by compressed air, pound metal into shape with controlled high-pressure impact blows. The value of compressed air at the plant, said Reece, cannot be measured.

“If we don’t have compressed air, we don’t run. It’s really critical,” he said, noting volume and proper pressure of compressed air are equally vital. “We also have to keep pressure in the system close to 100 psi at all times.”

Over the years, the compressed air system at PC Forge increasingly struggled to provide a reliable and stable supply of air to the plant. The system included six 350-horsepower (hp) fixed-speed rotary screw air compressors, each of which is rated to deliver up to 1,500 scfm at 110 psi. It also included a 5,000-gallon receiver tank.

The limited capacity of the compressed air system hampered production, which ultimately became unacceptable given high demand for PC Forge’s products. The issue, Reece said, was the inability of the system to keep pace.

“Our goal is to keep the hammers running at full capacity when needed without running ourselves low on air,” he said. “Unfortunately, if we were running three hammers at the same time we’d be starved for air, which would slow them down. Other times there wasn’t enough air to have both of our two bigger hammers running at the same time so we’d have to shut one down until the other one was finished before we could start it back up. It just wasn’t good for efficiency.”

Additionally, the costs of electricity to power the compressed air system – as well as the entire plant – continued to climb.

“Our problem is that electric utility costs have been skyrocketing, “Kinney said. “We’re upwards of 15 cents per kWh and it’s only expected to go higher.”

With the goal of reduced operating costs, Kinney explored IESO’s Save on Energy Retrofit program, which helps fund retrofits, energy audits, and controls at plants with programs that reduce electricity demand at peak usage times. Knowing the full extent of the potential incentive, Kinney decided the time was right to revisit the compressed air system.

Although familiar with the plant’s system, CFM conducted a thorough evaluation of plant operations and the use of compressed air to formulate a plan for achieving PC Forge’s goals for a more efficient and less costly system. CFM’s compressed air assessment included a review of the plant’s Panoramic Power™ monitoring system, which tracks electrical power consumption for all plant systems, including air compressors. CFM also installed an airflow meter on the header of the compressed air piping system to gain insight into actual compressed air usage.

“The Panoramic Power system gave us all of the amperage and calculated kilowatt hours and we overlaid that information with data about plant compressed air flow to determine how much they could save with a system upgrade, said Quentin Foran, CFM Project specialist. “Once we saw the data it confirmed what we originally thought about the issues and what do to do fix them.”

PC Forge manually controlled the air compressors and normally operated all six units in modulation, non-stop throughout production. The air compressors operated part load at 70 to 80 percent five days a week, as well as alternating Saturdays.

On a typical day, the plant would turn on all of the air compressors at the start of the production shift and operate them in modulation. Doing so gave PC Forge the ability to meet wide swings in demand for compressed air since the amount of air needed was driven by the number of hammers in operation at any given time. Each forge hammer required 1,000 to 1,600 cfm. Demand for air plantwide could be 700 cfm one minute and surge to 6,500 cfm the next.

Brian Wilkins, Owner of CFM, said PC Forge had little choice but to keep the air compressors operating in modulation given the demand profile.

“The machines couldn’t start up and then add air to the system quickly enough since pressure would drop in seconds. The only way to combat it over the years was to leave them all on in modulation so they would all be making air already and could meet the big surge in demand,” Wilkins said.

In all, the compressed air system at PC Forge consumed 3.4 million kWh of power per year. The cost for electrical power, production issues and the opportunity for an IESO incentive of up to \$300,000 pointed to the need to re-engineer the system. 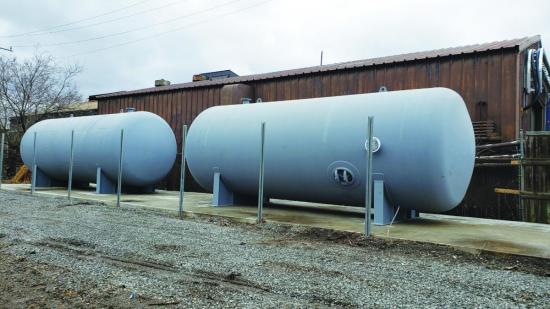 The master controller automatically controls the operation of the air compressors to gain maximum system efficiency. The VSD is used to satisfy fluctuations in demand for air up to 2,000 cfm. When the need for air climbs above 2,000 cfm, the system adds base-load air compressors as needed and runs the VSD machine at part load as a trim machine. The master controller also rotates the operation of base-load machines to minimize wear and tear on any one unit. The storage tanks, in the meantime, eliminate problems with pressure drop.

Since the completion of the installation in 2019, the system has performed flawlessly – allowing PC Forge to operate any and all hammers when needed to meet production goals. The ability to run all five forge hammers at any given time represents a 40% increase in forging capability.

“We learned a lot and we thank the folks at CFM for how much we learned since now know the VSD unit, controller, and additional storage together contribute to the outcome,” said Kinney, adding how the project exceeded expectations. “We’re running fewer air compressors to get the results we need. Before we were running five machines and not meeting the load. Now, we can generally run two to four machines and meet the load.”

Today, the compressed air system consumes approximately 1.5 million kWh of electrical power compared with 3.4 million kWh of power before the retrofit. As a result, PC Forge saves \$250,00-\$350,000 per year, which varies based on the IESO rate structure. IESO also awarded PC Forge a \$245,000 incentive, resulting in a one-year project payback.

With the completed project, PC Forge can now focus on production and not whether the compressed air system can match demand.

“It’s what we needed. We’re able to run the whole shop at the same time and not have problems with air when we’re at full capacity,” said Reece. “Now it’s right there all of the time. From the production standpoint, it’s just great.”