When a company is considering making an investment of more than a million dollars in system upgrades, it is crucial for them to review all options to get the best return. By exploring energy efficiency impacts throughout the entire compressed air system, vendors can propose projects resulting in both a larger sale for them and increased financial benefits for their customers, while still meeting capital expenditure guidelines. This “best of both worlds” scenario was evident when a foundry in the Midwest was evaluating options for replacing its steam system used to drive the plant’s forging hammers.

Steam hammers have proven to be invaluable in many industrial processes, especially the steel forging business. Yet steam systems are not energy efficient, as modern forging hammers are driven either hydraulically or with compressed air. This particular steel forging foundry knew it was time to contact its maintenance vendor for help when the company realized it was facing nearly \$660,000 in deferred maintenance.

The vendor and the foundry’s plant engineer worked together to evaluate the existing system. It was determined the aging equipment would need to be replaced in the next 5 years. They were also able to calculate current annual operating costs. They calculated fuel, electric, water, and other miscellaneous costs using the approach described below: 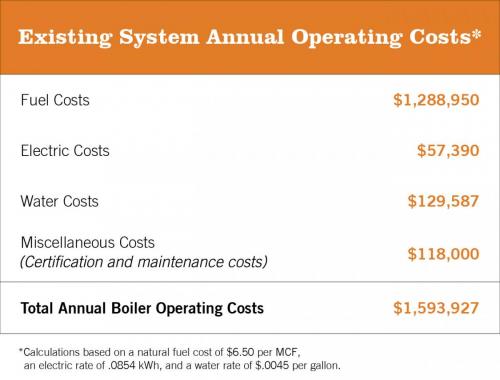 Table 1: The foundry’s existing boiler system has an annual operating cost of nearly \$1,600,000.

Switching from Steam to Compressed Air

The plant only needed steam production for 2,700 hours annually. However, the boilers ran an extra 300 hours each year during start up. A compressed air system driving the hammers would only need to run 2,700 hours. Therefore, the cost per hour of productivity of the existing system was \$590. And, despite the plant having a variable load, the existing system was constantly producing the same volume of output, resulting in wasted energy.

The vendor knew from experience that electrically driven compressed air systems typically produce around 100 cubic feet per minute (cfm) at approximately 20 kW, or 0.2 kW per cfm. Therefore, knowing that the plant required a maximum of 25,000 cfm, the operating cost of a new system would be no more than \$427 per hour¹ — a savings of \$163 per hour over the current system (or \$440,000 annually). Based on operating costs alone, the natural solution was a switch to an electrically driven compressed air system to drive the hammers.

At this point, the plant engineer asked for a proposal for a new system.

The foundry has capital expenditure guidelines that require any capital project have a simple pay back (SPB) ² of five years or better. To meet this requirement, the compressed air vendor proposed a complete system with an installation cost of \$3,910,000. The package included:

Using the actual cubic feet per minute (acfm) load profile determined during the existing system assessment, the vendor was able to calculate the energy and water savings of the new system. In addition to the \$660,000 savings in deferred maintenance, the vendor-proposed system (Table 2) would provide annual energy and water savings of \$780,000 (nearly a 50 percent reduction from their current annual operating costs) and meet the SPB requirement of five years. The proposed system was estimated to result in an hourly operating cost of \$302, assuming 2,700 operating hours per year. 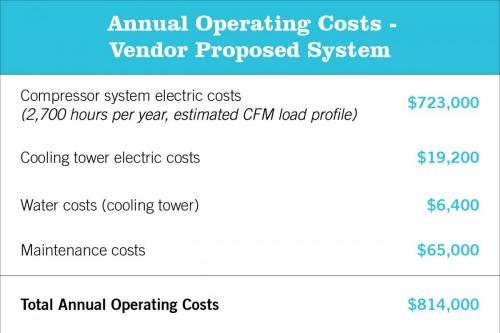 The foundry, like many businesses, wanted to reduce operating costs but realized that they lacked the in-house expertise to properly assess their facilities from both an asset management and an energy efficiency perspective. Seeking a third-party review of the vendor’s calculated energy savings, the company contacted an energy efficiency consulting service provider for the foundry’s electric utility.

The energy consultant used the information provided to design and model three compressed air systems with lower initial costs (Table 3). These systems included a series of smaller rotary screw compressors controlled to modulate based on cfm demand. The modeling confirmed that the vendor’s proposed system was more energy efficient than any of the three systems with lower initial costs, eliminating these system options from further consideration.

However, the inherent inability of centrifugal compressors to match kilowatt (kW) input with cfm output also meant that the vendor’s proposed system would still be operating inefficiently at some loads. Since the foundry’s plant cfm requirement would be between 15,000 and 24,000 (i.e., 50 to 90 percent loaded) most of the time, the energy consultant modeled two more systems that incorporated high-efficiency rotary screw compressors acting as trim compressors into the vendor’s proposed system.

At the higher system loads, the trim compressor systems are able to operate at lower kW levels compared to the original system proposed by the vendor, and kW input more closely matches cfm output, resulting in a more energy efficient system with greater energy savings for the company. 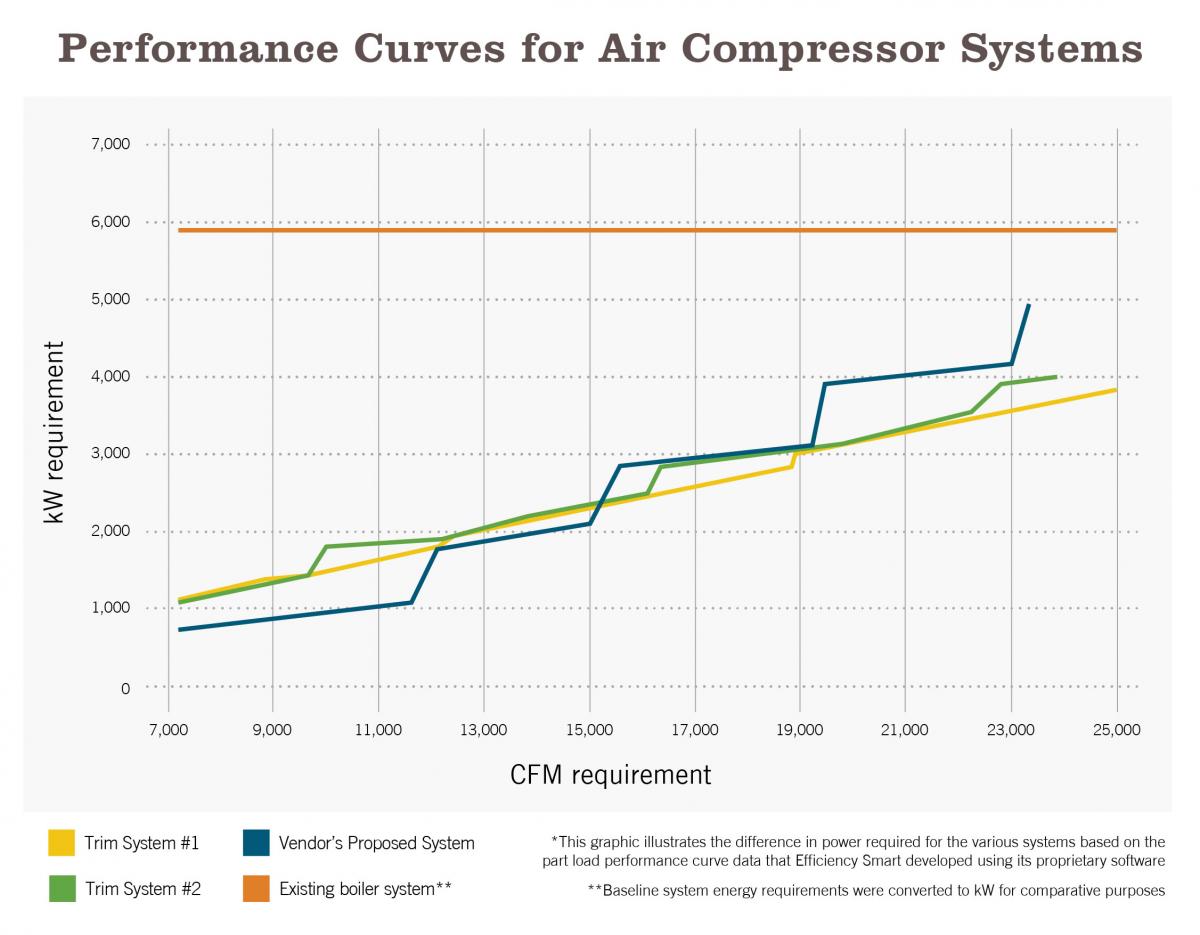 Table 3: Highlighting the result of the modeling and comparing power consumption at various loads in cfm.

By comparing the average hourly operating costs calculated for each system with the anticipated cfm operating requirement, a clearer picture was developed. The foundry’s existing boiler system is the most expensive to operate, while the trim compressor systems are the cheapest to operate. The energy consultant recommended the Trim Compressor System – Option #1 from Table 4, as it is was shown to be not only the cheapest to operate, but the actual energy consumption will also vary proportionally with the load. 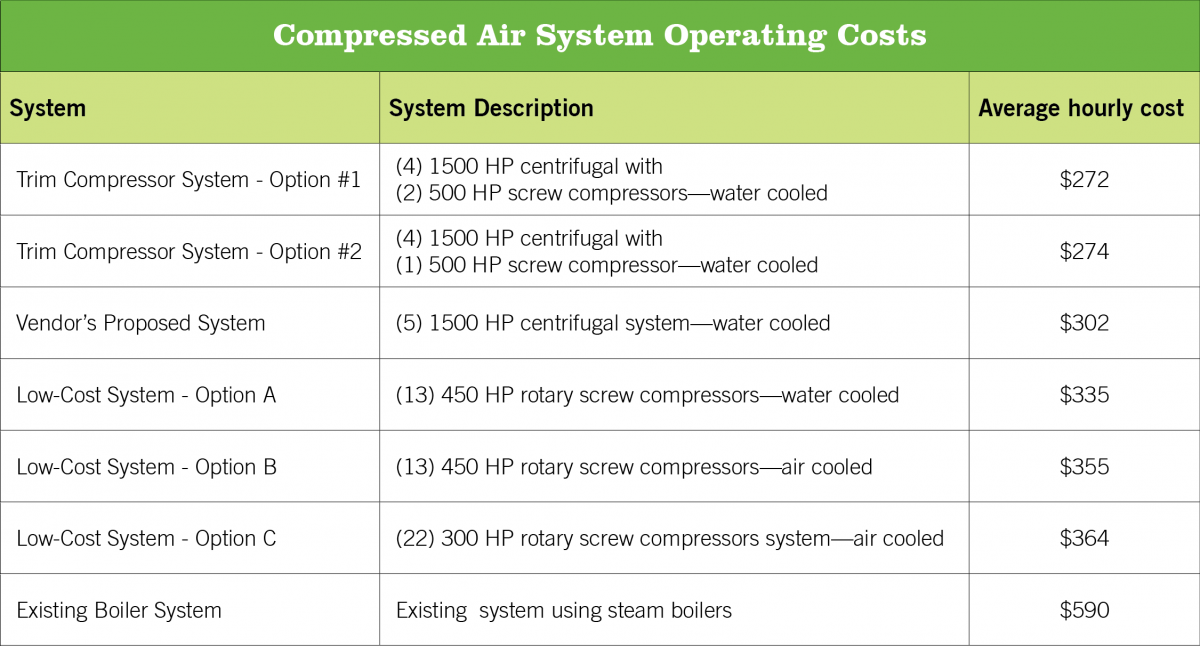 This option would create a system that would operate at a lower cost, as it increased the energy savings by \$81,000 annually compared to the vendor’s suggested system. It did, however, require an additional capital investment of \$403,000, resulting in a SPB of 5.3 years, not meeting the requirements of the foundry’s capital expenditure guidelines.

The foundry’s plant engineer wanted to move forward with the more energy efficient option (Trim Compressor System – Option #1), but needed to show a SPB of five years or less for the project to meet the company’s capital expenditures guidelines. He challenged his energy efficiency service provider to help him meet this requirement, and so the energy consultant turned to the ancillary compressed air system equipment to look for additional opportunities for energy or cost savings. The energy consultant considered the typical energy conservation measures associated with compressed air systems, such as properly sized or additional air receivers, no-loss condensate drains, modulating speed controls on the cooling tower fans, energy efficient air dryers, system pressure reduction, and leak repairs.

After reviewing these typical measures, the energy consultant determined that all of the systems modeled included properly sized air receivers and that additional air storage would not increase energy savings. In addition, pressure reduction and leak repair energy conversation measures were not considered to be part of this project, but the foundry indicated that this could be a "Phase II Project” once the new compressed air system was up and running.

Since the equipment would be located in unheated space (the new building), HOC desiccant-style dryers were required. HOC dryers are the most energy efficient dryers available, since they need no additional energy to operate. However, the initial capital cost is higher than other dryer types. Adding heat to the unheated building was not determined as a cost-effective solution. Therefore, no further energy or cost savings could be realized by switching dryers.

The energy consultant was able to identify energy saving opportunities when reviewing the existing system condensate drains. He observed that the system used timed drains, which were not the most energy-efficient option.

Drains are used to allow unwanted condensate to exit the system. Two basic categories of drains exist: timed drains and no-loss drains. Timed drains open a solenoid valve on a timed interval for a pre-determined duration. Since these drains are usually set for the longest period necessary, air is wasted when the valve opens for too long, as condensate is expelled along with some compressed air before the drain closes again.

A no-loss drain is controlled by a float valve and opens only when needed — not allowing any compressed air to escape and resulting in energy savings. The added cost for upgrading from timed drains to no-loss drains throughout the compressed air system and plant was calculated to be \$4,800, but it would result in an additional \$16,800 in annual savings. Therefore, the energy consultant proposed the inclusion of no-loss drains with this project.

Lastly, the consultant noted that the vendor’s proposed system would use a cooling tower with two-speed fans. Speed control on the cooling tower fans allows the fans to slow as outside air temperature drops. When the air temperature is low enough, simply running water through the tower will create enough cooling that the use of fans is not needed. A variable speed drive (VSD) controller used to modulate the fan motor speed to just meet the cooling requirement would result in less fan motor energy consumption than two-speed fan control. The energy consultant recommended that the system include a VSD on the tower fans, resulting in an additional \$6,000 in annual energy savings at an additional project cost of \$11,000.

The additional energy savings associated with the no-loss drains and the VSD cooling tower fan control resulted in a project that was able to meet the foundry’s 5-year SPB requirement at the lowest operating cost. The recommended trim compressor system with no-loss drains and cooling tower fan VSD control had a total project cost of \$4,320,000, with an annual energy savings of \$885,000 and a SPB of 4.9 years. The new project had increased annual savings by 13.5 percent, at an increased cost of only 10.5 percent.

Creating the Best of Both Worlds

Focusing on initial capital cost to ensure that the customer’s financial criteria are met has been the traditional modus operandi for vendors. However, this is only one piece of the puzzle. Compressed air solutions that take into account operating costs as well as the initial capital cost can provide the customer with better financial choices, while potentially creating a larger sale. In this example of a Midwestern foundry, the project cost increased from \$3.9 million to \$4.3 million. However, it resulted in increased energy savings and still met the customer’s financial requirements for the project, proving that you can have the “best of both worlds.”