Four Action Items Save Money and Energy at a Refinery

This is an old refinery that has been modified many times over the years. There are multiple air compressor and air treatment systems all over the facility. As the system demands increased over the years, satellite compressors and heated desiccant dryers have been added throughout the major production areas.

• The original power house had a large Clark Natural Gas Angle engine/compressor and a mix of Worthington, four-point mounted, two-stage, double-acting, horizontal reciprocating units. About ten years ago, a 3,200-scfm, steam turbine-driven, centrifugal air compressor was added along with a steam-regenerative, 3,500 scfm blower purge desiccant air dryer. The reciprocating units have been taken out of service due to very high maintenance cost and obsolescence of major parts.

• Other production areas have a mix of lubricant cooled, single-stage rotary screw air compressors. The air is treated by many types of heated and heatless desiccant air dryers. One production area, located across the street from the main power house, slated for demand-growth, has contaminated ambient air.

• Six or more diesel-driven rental units have been brought in as back-up units into various production areas (and the main power plant) on a continuing basis with a minimum rental and diesel fuel cost of \$883,000 per year. The plant also has a cost to install and maintain the large diesel engines with oil and filter changes every 150-200 hours of operation. We estimate this total cost conservatively at \$50,000 per year.

This was a supply and demand-side audit. Due to article length limitations, we will outline only the actions we took to reduce the costs associated with the rental air compressors AND we will outline actions taken to reduce compressed air consumption. The supply-side was reconfigured with new, more efficient air compressors with controls capable of capitalizing on the reductions in air demand – but that’s another story.

The following actions were taken to establish baseline measures for flow and pressure:

1. Temperature readings were obtained on all units using an infrared surface pyrometer. These were observed and recorded to correlate to the unit’s performance, load conditions and integrity.

3. Pressure readings were taken throughout the plants with the same Ashcroft test gauge used in No. 2 above.

4. Discussions were held in detail with the appropriate operation in various units.

The rental diesel air compressors are currently costing \$883,088 annually in diesel fuel and rental fees. They are used as emergency back-ups to the stationary, electric-motor driven air compressors in different areas of the refinery. Four of the six rental air compressors are over-sized for the application and should be replaced with smaller units. This will generate a savings of \$441,544 with almost no associated costs.

• In Production Area “A”, a 1,379 scfm Atlas Copco backs up a 368 scfm air compressor. During our visit, the back-up rental compressor was not needed. This unit should be replaced with a smaller air compressor capable of 368 scfm.

• In Production Area “B”, a 1,430 scfm Sullair runs continuously at 1,300 rpm, which is at about 50% of capacity. This unit should be replaced with a smaller rental air compressor capable of 715 scfm.

• In the Unicracker Production Area “C”, there are two 1,430 scfm Ingersoll Rand air compressors - of which only one runs at a time. The on-line air compressor runs at 1,400 rpm continually, which is about 715 cfm. These two units should be replaced with a smaller rental air compressor capable of 715 scfm.

There are two piping changes required in the main power house.

The two 1600 scfm diesel air compressors, backing up the Elliott centrifugal in the main plant air power house, are correctly sized. There are, however, two piping issues here. The current connection of the Sullair and IR units to back up the Elliott will preclude both of these units from reaching full load. The air line from the IR is connected to a 3” diameter spool piece about eight feet long. The Sullair connects with a 90° tee entry right at the front of the spool piece (see sketch). The high degree of turbulence-driven backpressure will force both units to prematurely unload, not allowing full flow into the plant at acceptable pressures.

Changing this spool piece to a 6” diameter pipe and connecting the Sullair with a mid mounted 30° to 45° angle directional entry (see sketch) will eliminate this problem. Consider adding additional directional angle entries to the new spool piece for other compressors, when required. Note: The connection from the 4” hose and Sullair 1600H is through a 2” line to the piping trough. This is probably also building up some backpressure. Since this unit is apparently only putting about 715-725 scfm into the system, it could be changed out for a smaller 750 scfm to 825 cfm unit. The 2” line will not then be such a problem, but probably should be changed to 3” or 4”.

This piping modifications will allow these two units to fully “load in” and deliver their 2,860 scfm to back up the 3,200 cfm Elliott centrifugal. Without this change, we would not expect more than 1,200 to 1,400 scfm to flow freely at 115 psig and additional units will have to run to hold pressure.

The most energy-efficient air compressor in the system is the steam-driven Elliott 3-stage centrifugal air compressor. Steam is at 600 psig let-down and is considered “free” at the refinery as it is reduced from 600 psig to a usable 150 psig for other processes by running the turbine. The Elliott compressor delivers 3,200 scfm at 135 psig @ 594.4 kW (electric version) with a specific power of 5.38 scfm/kW specific power (if electric driven). This efficiency with the low cost of 600 psig to 150 psig let-down steam power, makes this a very low-cost operating energy unit.

The Elliott compressor cannot reach full flow but stays in blow off because of too small a service line to main production area across the street.

The piping change required is to connect the existing (but abandoned) 6” phenolic line at the plant air compressor room header. This line runs across the street to a production area which is experiencing demand growth. This area across the street, however, has a contaminated ambient environment. For this reason and due to the “free steam”, we recommend re-connecting this phenolic line. This will also allow the Elliott to fully load in and supply a continuing 3,200 scfm instead of only the 2,400 scfm it does now. This will supply an extra 800 scfm at a very favorable efficiency – free steam power. 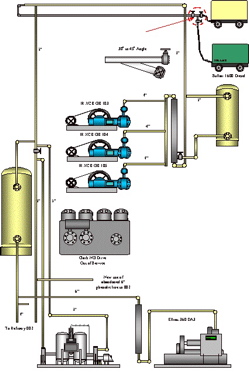 A survey of compressed air leaks was conducted at the plant and 115 leaks were identified, quantified, tagged, and logged. Potential savings totaled 451 cfm for the 115 leaks that were identified.

Leaks were located in many locations. The largest leak was a series of leaks, totaling 100 scfm, located in the truck transporter. A three-inch pump had a 10 scfm leak, and there were multiple 5 scfm leaks located at filters, lubricators, valves and hose reels.

Shutting off the air supply to these leaks when the area is idle would save significant energy use. Reducing the overall system pressure would also reduce the impact of the leaks, when air to the machine cannot be shut off. Repairing the leaks can save additional energy. The savings estimates associated with a leak management program are based on the unloading controls of the compressors being able to effectively translate less air flow into lower cost.

With a few minor exceptions, most of the leaks could not have been found without the use of an ultrasonic leak detector and a trained operator. Leak locating during production time with the proper equipment is very effective and often shows leaks that are not there when idle.

However, a regular program of inspecting the systems in “off hours” with “air powered up” is also a good idea. In a system such as this one, some 90 to 95% of the total leaks will be in the use of the machinery, not in the distribution system.

nymce/jscripts/tiny_mce/themes/advanced/langs/en.js?W" type="text/javascript"> any of the smaller leaks. In continuing the leak management program, plant staff should perform leak detection during non-production hours in order to eliminate some of the high ultrasonic background noise.

Although air-operated diaphragm pumps are not very energy efficient, they tolerate aggressive conditions relatively well and run without catastrophic damage even if the pump is dry. There are several questions to ask and areas to investigate that may yield significant air savings:

• Consider installing electronic or ultrasonic controls to shut pumps off automatically when not needed. Remember that pumps waste the most air when they are pumping nothing.

The assessment recommends adding a MizAir pump control system, manufactured by ProportionAir, to 24 (1.5” to 3”) pumps in the production area. This will reduce the air demand by approximately 50% and keep throughput about the same by optimizing the stroke. Pump maintenance is also greatly reduced and wearing parts last longer, by using a microprocessor to control the stroke without end of stroke impact.

This case study shows just how a large facility, which grows over time, is the right situation for a compressed air system assessment. Most optimization opportunities are present and the potential for quick wins and very attractive project ROI’s is very high. Piping systems, upgrading air compressors and air dryers, leak surveys, end uses, are all areas which were improved in the compressed air system at this refinery.

To read more articles about the Oil and Gas Industry, visit www.airbestpractices.com/industries/oil-gas.