The history of The Titus Company is one of all-American entrepreneurial success. After working at Kemp, a compressed air and gas dryer manufacturer, for eight years, Stephen Titus founded The Titus Company in 1986 with his wife, Donna Titus. In the early years, the company operated out of its modest headquarters in southeastern Pennsylvania.

“That’s how I got started,” Stephen Titus, Co-Founder and President of The Titus Company told the team at Compressed Air Best Practices®. “It was my wife and I, and our three kids. I had the top floor of a rented townhome, and I had a fax machine, a typewriter, a copier, an old drafting table, and a telephone.”

Since then, The Titus Company, a distributor and integrator of compressed air and gas systems based in Morgantown, PA, has grown tremendously in size, scope and capabilities. While part of the company still functions as a distributorship, overseeing territories in southeastern Pennsylvania, Delaware and New Jersey, another branch of the company, Titus Air Systems, now operates on a global scale. The company caters to a diverse clientele base, ranging from Amish Country Gazebos to the Royal Navy of the United Arab Emirates.

In our discussions with Stephen Titus and James Bowers, National Sales Manager of Titus Air Systems, we talked about several examples of how The Titus Company provided custom-engineered solutions to various customers. The diversity and complexity of these jobs exemplify how The Titus Company has grown from a small distributorship operating out of a townhome to a thriving compressed air and gas solutions provider capable of tackling highly nuanced applications.

Before the Buzzword: Selling Energy Efficiency in ‘87

In 1987, representatives from an oil refinery approached Titus because they needed to dry the carbon dioxide (CO2) emissions coming from their hydrocracking application. The refinery had two uses for the CO2 coming from their reformer: (1) They could bottle the CO2 and sell it, and (2) they could use the dried CO2 to inert certain tanks and processes within their facility.

For inerting, the oil refinery’s only alternative to CO2 was nitrogen, which was simply out of the question.

“The backup is nitrogen,” Titus explained. “But nitrogen — in the quantities that they are using it — is very expensive.”

Initially, The Titus Company installed an ORIAD© Series internally heated reactivated dryer, which dried the 690 scfm of gas coming in at 90 psi to a -40°F pressure dewpoint. While the installation may have been straightforward, the original selling point was unique for that time period.

“We sold a great deal of the ORIAD© dryers, and we sold them based on energy,” Titus explained. “Kemp was talking about energy long before it became a buzzword. The capital cost was higher, but we could prove over time that ORIAD© had a lower lifecycle cost than a pressure swing dryer simply because of the lower compressed air use.”

Working on an 8-hour reversal, the ORIAD© only used about 2 percent of incoming compressed air as purge air. In other systems — like a blower purge, convection dryer, or another type of heated dryer — the heated purge air needs to circulate. But, because the ORIAD© dryer was internally heated, the purge air was used to simply sweep the water from the system.

When compared to a typical pressure swing dryer, which might use up to 20 percent of its compressed air supply as purge air, the ORIAD© could yield significant long-term energy savings.

As the oil refinery developed, it experienced an increase in CO2 demand. Gradually, they stopped bottling and selling CO2 and began using it strictly for their inerting processes. That is, however, until the refinery closed in 2008. At that point, the original ORIAD© dryer was left in a susceptible condition, and its internal components rusted out entirely — leaving it in complete disrepair (Figure 1). 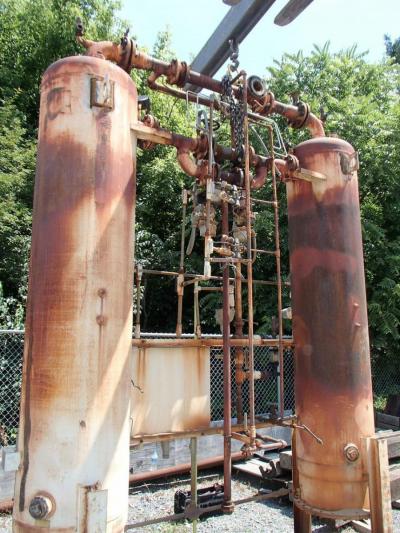 Fast forward to 2014. The oil refinery reopened, and it was left without the ability to dry CO2 for its inerting needs. Because the ORIAD© was left to deteriorate, the original dryer could not function at all. The oil refinery had allocated a little more than \$100,000 to address the dryer problem, leaving them in a difficult situation. At that price, they could not afford to purchase a new gas dryer, which would cost an estimated \$170,000. Fortunately, by that time The Titus Company had the in-house engineering capabilities and resources to rebuild the original dryer. More importantly, they could do it within the oil refinery’s budget.

It was at this stage when the job became much more complex. The dryer had two towers — the East Tower, which needed a total overhaul — and the West Tower, which needed to be replaced. To further complicate the matter, the Kemp line had been acquired and shut down by SPX, meaning that the parts necessary for the rebuild were long out of production.

“That was one of the problems when we rebuilt this thing,” Titus said when describing the job. “Kemp was no longer around, so we had to basically reverse-engineer the dryer. We had to work with some of our suppliers to build these relatively complicated towers.”

When the team at Titus uninstalled the dryer for an overhaul, they needed to take into consideration the new CO2 flow at the oil refinery. The flow, which was originally measured at 690 scfm in 1987, had increased significantly since then.

“Currently, the flow is much higher,” Titus explained. “The flow meter indicates that it is a little over 800 scfm right now, but the orifice flow meter has been installed since 1987. It has seen 27 years of desiccant dust going through it, which throws off the reading. We believe that it could be up over 1200 scfm right now.”

Because the team at Titus knew that the CO2 flow had increased, but not by how much, they made sure that the maintenance crew at the oil refinery had plenty of options for calibrating the dryer’s cycle and reactivation times. The dryer now has 8-hour, 10-hour, 12-hour, 14-hour and 16-hour cycles, meaning it can shift at every 4, 5, 6, 7 and 8 hours. Initially, they started it on a 14-hour cycle. It currently runs on an 8-hour cycle, shifting every 4 hours (Figure 2). 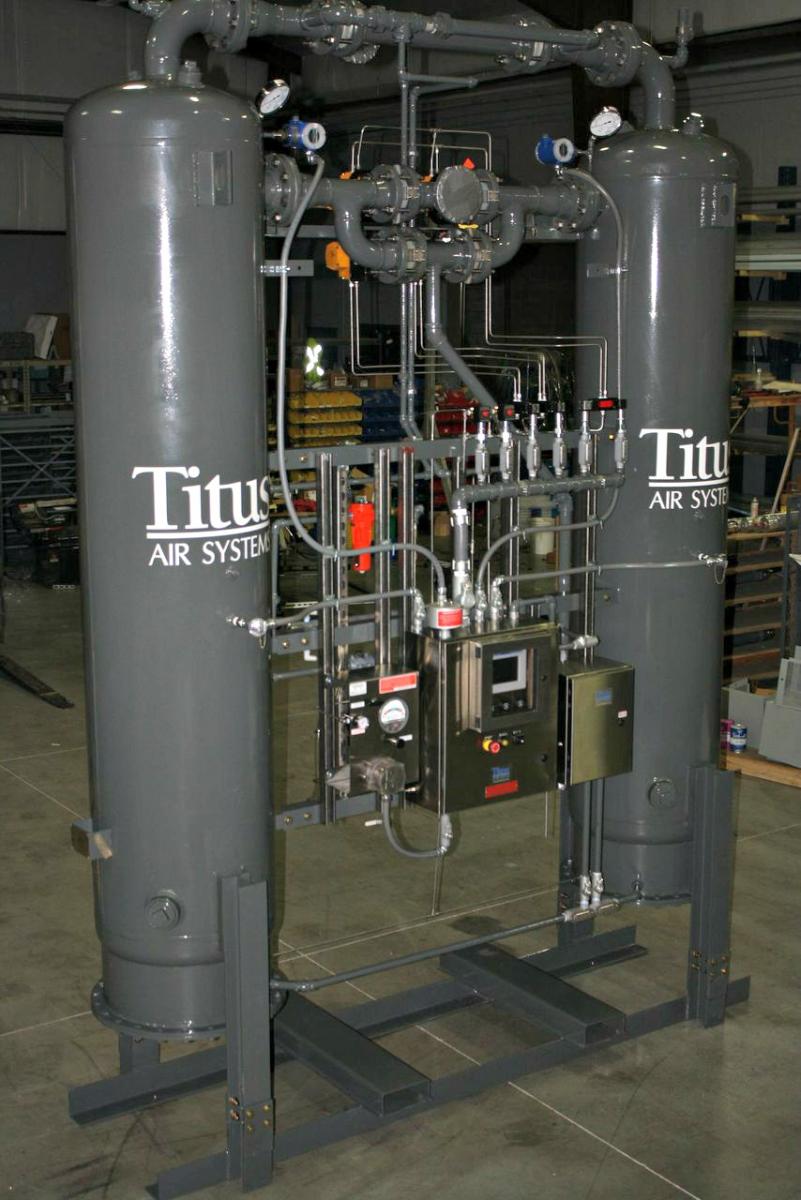 The safety standards governing the oil refinery had also been raised since 1987. Specifically, the engineers at Titus had to work with the refinery to relocate the purge gas ventilation, which used to vent right at the dryer. The new safety standards dictated that the CO2 had to be vented at least 20 ft in the air.

However, moving 250°F CO2 up a pipe that was surrounded by ambient temperatures as low as 10°F was a complicated process. The temperature differential between the pipe and the surrounding air caused a lot of condensation, which had to be removed quickly before it froze the piping. This coincided with many of the other issues that the refinery faces during the winter months.

“Keeping an oil refinery running in the winter time is a very difficult procedure,” Titus told us. “Typically, the facility’s personnel wrap insulation around condensate drains or anything else that has a tendency of freezing up, and they put a steam hose in there to try to keep the whole thing from freezing.”

Along the same vein, Titus worked with the refinery to install a steam trace along the purge piping, which is small stainless steel tubing that circulates low-pressure steam. They then insulated the piping and the steam trace together, ensuring that the condensate from the purge line would not freeze. To address any drainage issues, fittings were installed on the bottom of the purge piping, allowing condensate to drain when necessary.

Overall, Titus worked with this oil refinery closely for more than 27 years, helping them with both straightforward and complex CO2 treatment applications.

According to Bowers, natural gas does not transport as neatly as liquid oil does. Most natural gas fields have multiple compressors that take the gas and boost it to higher pressures for transportation. In these applications, nitrogen generators are used in conjunction with the compressors as a safety measure, effectively sealing and blanketing the natural gas.

For this specific job, the Titus engineers had to design a system that could endure a rugged marine environment with low ambient temperatures. In addition, there were tight footprint limitations, and the application had a 100 percent redundancy requirement. Fed by two independent 15- to 20-hp compressors, the nitrogen generators had to provide 20.8 cfm at 95 percent purity for each side.

“In this case, we looked at it and said we can actually build two nitrogen generators into one enclosure, making it easier to install,” Bowers explained. “You get single inlet and outlet connections, and it takes up a smaller footprint. It also eliminated the need to insulate and heat two enclosures.”

“When you’re working with limited space, you have to come up with clever alternatives in how you run the piping and membranes,” Bowers explained. “In this case, there are four membranes, but they are stacked front to back, which is somewhat unique.”

The engineers at Titus also had to install two complete sets of filters, which ran front to back, as well as two completely separate electrical systems. There was also the issue of serviceability. 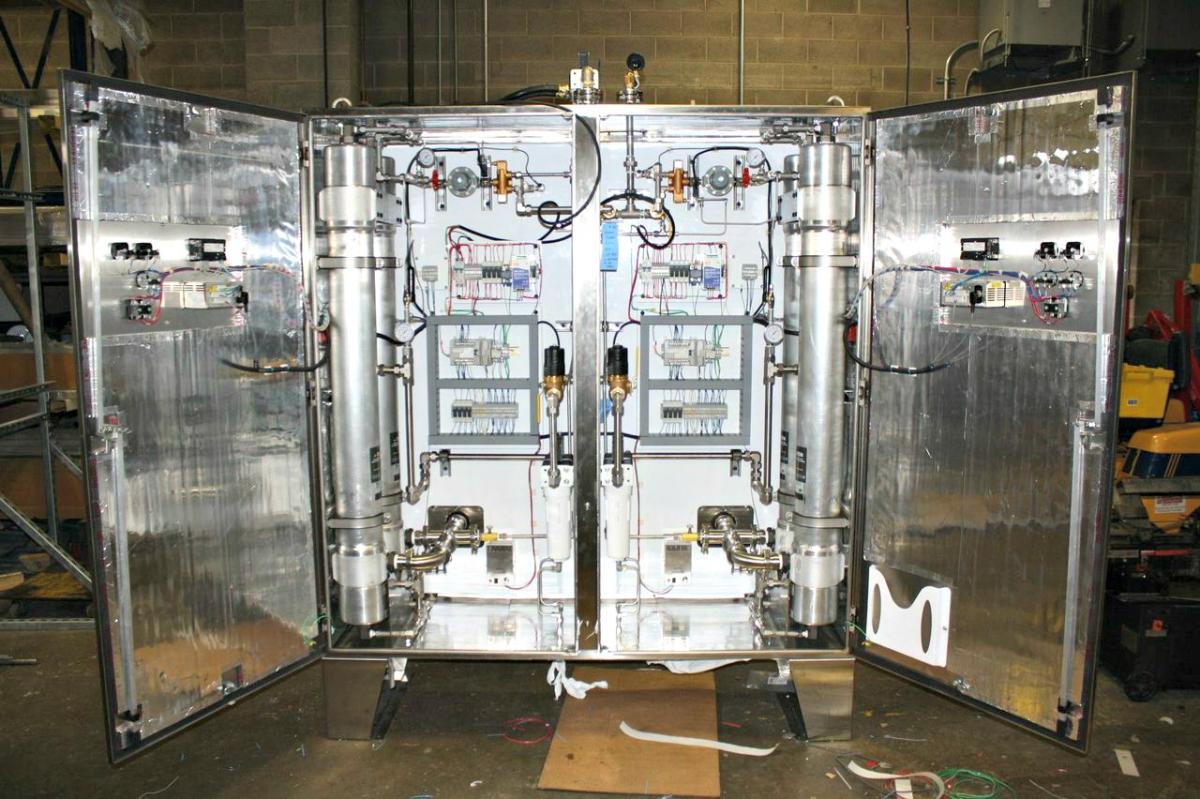 “You also have to take into account that these have to be serviced,” Bowers continued. “ So, yes, you want to squeeze a lot into a small space, but it also has to be accessible.”

The final system can be seen in Figure 3, which visibly demonstrates the clever design. According to Bowers, each system monitored its own oxygen, pressure and temperature levels, and the two separate PLCs communicated with each other to ensure redundancy.

In the midst of a tight-lipped and time-consuming production process at a submarine manufacturing facility, the engineers at Titus made a somewhat serendipitous discovery. The facility’s nitrogen generation system was sized for peak demand, which was a relatively rare event. During normal operation, the facility would only use one fifth of its capacity.

Specifically, the manufacturer’s total nitrogen capacity was 800 cubic feet per hour at 99.5 percent purity, which would have required 800 scfm of compressed air. Most of the time, however, they only needed 17 scfm. On a 24/7 basis, that overkill in capacity would be gratuitously expensive.

With that in mind, Bowers and his team devised a creative solution to save the manufacturer a tremendous amount or rework and time — in addition to enormous energy savings.

The nitrogen generation system had five membrane modules, each of which would use compressed air constantly. In order to limit its consumption, the Titus team augmented the design so that the modules could be staged. With the modification, the secondary modules are activated only when the demand for nitrogen exceeds the single module.

The modified system keyed on the oxygen content, controlling the solenoid valves on the inlet to cut off the compressed air supply. While Titus could have made the system more sophisticated, they knew that the facility would either need the full capacity, or one fifth of that capacity. So, when the facility shifts to maximum demand, all of the modules are enabled — providing the full capacity of nitrogen to the application. Then, when the oxygen content begins to creep down, the membrane modules stage off to reduce the compressed air demand.

Figure 4: Custom-engineered nitrogen generator that stages from one to five modules 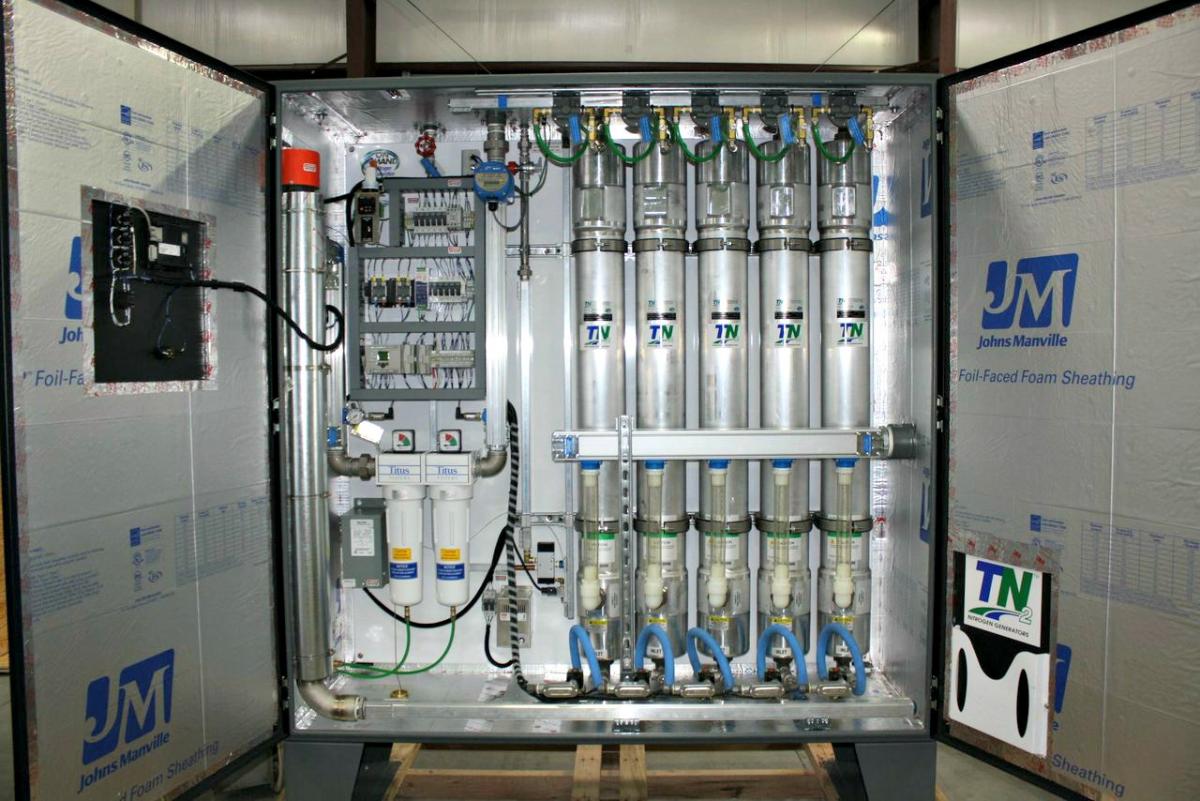 The custom-engineered solution (Figure 4) saved the submarine manufacturer a significant amount of downtime and energy costs. With everything considered, the simple payback was a little less than three months.

From the top floor of a townhome to working on a global scale, the progression of The Titus Company is certainly impressive. Titus now does much more than distribute and integrate catalog products. With an in-house engineering team and a sales force with strong a technical background, The Titus Company provides customized solutions for compressed air and gas systems, nitrogen generation systems, and membrane dehydration systems. They also have their own line of small heatless desiccant dryers and air filters.