The facility has a compressed air system consisting of four, 200-horsepower (hp) two-stage water-cooled lubricant-free reciprocating air compressors (Figure 1). The air compressors are controlled individually with local pressure switch controls connected to a common pressure sensing point. These air compressors have been operating since the mid-1960s and are very difficult and expensive to maintain because parts are scarce and service companies with experience servicing this type of air compressor are difficult to find. 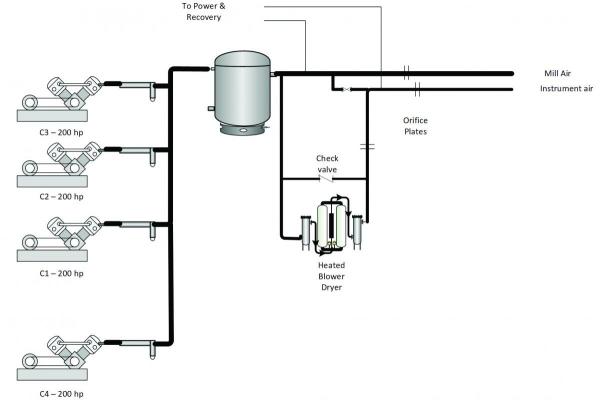 The air produced by the air compressors first runs through a large 4,000-gallon wet receiver and then splits to the mill and instrument systems. The compressed air is transmitted throughout the plant through a system of steel piping, with the mill air a 6-inch supply size, instrument air a 4-inch supply. The piping consists of radial feeds running to various areas in the plant.

In recent years the plant has been experiencing capacity problems. In the past, only three air compressors were required during full production, with one spare, but now all four air compressors are required, and even then, there are periods of time where the pressure falls to low levels because the plant demand exceeds the air compressor capacity.

The plant’s instrument air system has, in recent years, been suffering from low pressure, even though the plant air compressors are apparently producing air at an adequate pressure.

Plant management decided to call in a compressed air auditor to measure their system. Data loggers were placed on all the air compressors and the dryer to measure power, with pressure loggers located at various locations throughout the plant to assess the pressure gradient. The existing plant flow meters were also monitored by the same data logging system to capture plant flows. This information was all combined into a single database so the system baseline could be determined.

Part of the assessment included leakage detection and an assessment of various end uses of compressed air. This was done using an ultrasonic leak detector, with all leakage tagged and entered into a database, including photographs of the locations to assist maintenance staff in finding them when repairs are done. Based on the current electrical costs the following baseline was captured (Figure 2). 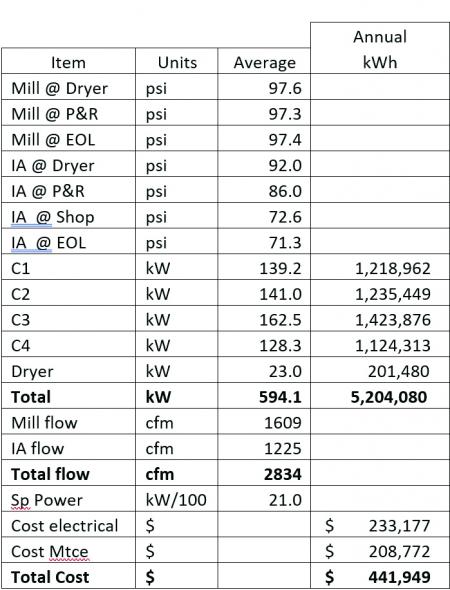 The baseline showed a very significant pressure drop between the inlet of the air dryer and the end of line of the instrument air system.

For this site, the maintenance costs for the air compressors and air dryer have been tracked for a number of years. The typical rule-of-thumb maintenance cost component for a compressed air system running full time should be in the five to 15 percent of electrical cost range. In this case, the average annual costs to maintain the equipment was near 90% of the electrical costs. For this site the electrical costs are actually quite low, about 4.5 cents per kWh, which by default changes the operating cost percentage compared to a plant with 10 cents per kWh. But, the age of the air compressor, travel time to this fairly remote site, and high parts costs have driven the annual cost to operate these obsolete air compressors very high.

The readings and observations during the measurement period showed the air compressors (including dryer) are producing compressed air at acceptable efficiency (21 kW/100 cfm), but that improvements could likely be made if newer, more efficient air compressors were used.  Plant loading has increased so much in the past years that all four air compressors must run to carry the total flow, three fully loaded with the fourth operating in trim duty, this represents a risk to production should one air compressor fail.

On the demand side there is significant energy consumption wasted due to the flow consumed by blowing, electronic enclosure cooling and leakage. The instrument air pressure is very low due to a large pressure differential (10 to 15 psi) across the system.

The study found there is a good potential for energy savings if some wasteful end uses can be reduced or eliminated, and that significant energy incentives are available to fund improvements if these projects are initiated.

Improvements to the low-pressure problems during high flow on the instrument air system can likely be achieved by using surplus storage receivers already located on site, and by reconfiguration of the piping on the discharge of the instrument dryer (adding a check valve to prevent back flow during transient events on mill air).

The pressure profile taken during the assessment (Figure 3) showed a very surprising characteristic. The pressure at the instrument air dryer normally runs about 92 psi, yet the pressure at Point 2 and Point 4 on the chart is very low, running near 72 psi. The piping for this system is well-sized but Point 2 is not very far away from the dryer discharge, this indicates some unanticipated pressure restriction in this section of piping. Additional pressure test ports were installed for secondary readings, and the pressure loss traced to one specific point, an old flow meter orifice plate that was still installed in the instrument air piping. 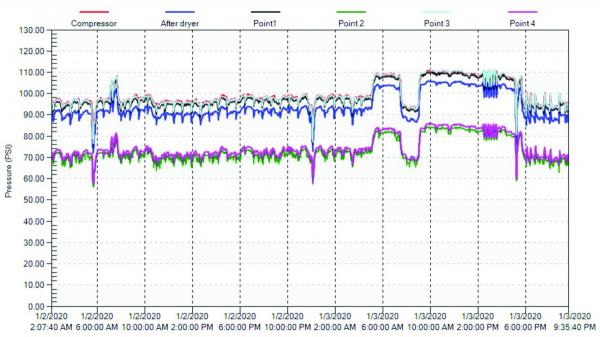 Figure 3: The pressure profile taken during the assessment showed excessive pressure loss on the instrument side. The green and the magenta traces show a large differential from the discharge of the air dryer (blue trace). All other readings track the air compressor discharge pressure because they are on the upstream side of the air dryer and filters.

The ultrasonic testing found 31 significant leaks totaling about 150 cfm. The infrastructure of the plant is aging, and with it leaks seem to spring out of nowhere. The plant had purchased their own leak detector and was part way through a focus on leakage repair by the time this assessment was done. 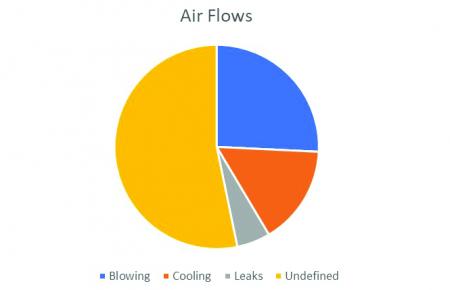 The compressed air auditor estimated significant savings could be gained if the following measures were implemented:

It is estimated these energy efficiency measures would reduce the compressed air costs by 33%, saving about \$79,000 per year in electrical costs and \$60,000 in maintenance costs. This project would qualify for a substantial utility incentive if implemented.

The Value of System Measurement

Once again, the value of performing a full measurement of the compressed air system is shown in the unanticipated discoveries made during this assessment. The plant was suffering from reduced pressure due to an unexpected cause; this was located by special testing. Air compressor capacity was lacking due to the addition of more and more inappropriate uses over time, finally reaching the full capacity of the system. The maintenance costs were much higher than normally seen on similar systems do to obsolescence and age. Many of these items were not previously known by plant management.

The plant engineering staff is now working hard to address the deficiencies, with an improvement in pressure, and significant reduction in operating costs on the horizon.