Rockline Industries is one of the largest global producers of consumer products, specializing in wet wipes and coffee filters. The company contacted the Arkansas Industrial Energy Clearinghouse after identifying that the compressed air system in their Springdale, Arkansas facility was a potential source of significant savings. Experts from the Clearinghouse then began working with Rockline Industries, representatives of the electric utility, and a local compressed air vendor to perform a complete evaluation of the system.

The case study presented below provides the results of a “systems approach,” which evaluated both the supply and demand sides of the system to develop the most cost-effective solution for providing high-quality compressed air to the manufacturing processes (1). The main goals of the project were to increase reliability, decrease maintenance, and decrease operating costs of the compressed air system, all while maintaining the quality of the compressed air. Rockline Industries was also incentivized by the electric utility representatives based on energy savings. Overall, the project included piping retrofits, equipment upgrades, pressure control changes, and compressor retrofits. The team also provided measurement and verification of the overall project savings. 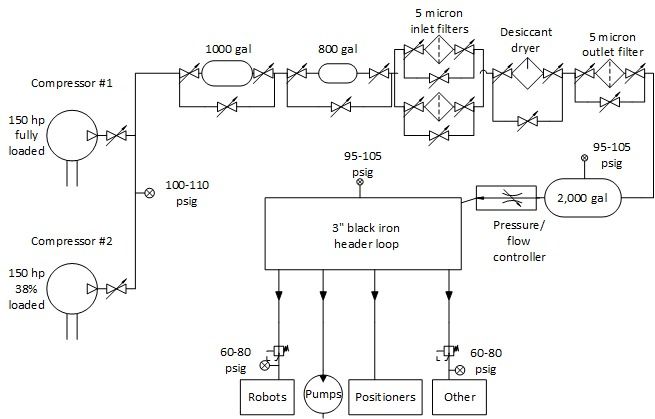 The Importance of the Systems Approach for Compressed Air Analysis

The component-level approach is often taken to improve a compressed air system, and it typically involves very specific, short-payback, and easily quantifiable measures (i.e. replacing an old compressor with a more efficient one). The Department of Energy and the Compressed Air Challenge, however, advocate a systems approach as the best practice for analyzing and improving a compressed air system. According to those organizations, the systems approach “requires not only addressing individual components, but also analyzing both the supply and the demand sides of the system and how they interact” (1).

The systems approach can be more costly and time-consuming, but it has the potential to optimize the overall performance of the compressed air system. It also offers the opportunity to implement more savings measures by subsidizing some measures with the savings from others.

The existing compressors at the facility were identical 150-hp, single-stage, load/unload rotary screw compressors. The specific efficiency of these compressors was rated by CAGI as 18.7 kW/100 cfm at full load (2), and each of the compressors was capable of producing 678 acfm. Baseline energy usage collected by data loggers indicated that one of the compressors ran at nearly full load, while the trim compressor loaded and unloaded to control system pressure (Figure 2). 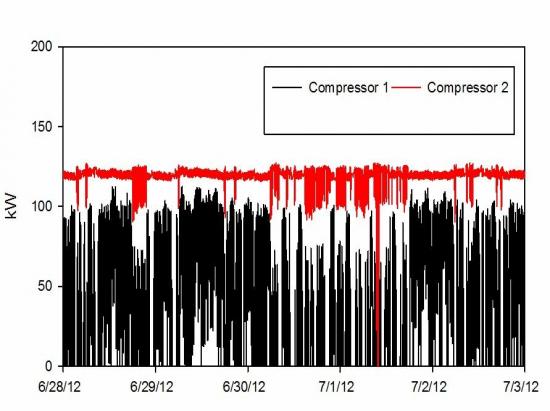 The cut-in pressure for the trim compressor was set to 100 psig, and the cut-out pressure was set to 110 psig. The compressor room contained two wet storage tanks, with a total capacity of 1800 gallons. A heated desiccant dryer was also located in the compressor room. Dry air was sent into the plant to a 2000 gallon dry storage tank, which typically remained around a nominal 100 psig. There was also a pressure/flow controller located between the dry storage tank and header loop, but the pressure controls were set to maintain maximum pressure downstream of the controller, essentially bypassing it.

The distribution system consisted of a 3-inch cast iron pipe header loop, which supplied air to all of the end uses in the facility. The main header connected to diaphragm pumps with separate, unregulated drops. There are 12 of these pumps, which are used to move lotions and other fluids. On average, each pump was being replaced about every 2 months, largely due to mechanical failure caused by over-pressurization.

The project began by replacing the 3-inch black iron header with a 90-mm aluminum piping system. The old header was more than 20 years old, and the iron pipe had degraded over time. When a recent air compressor event sent oil into the header, the entire plant was shut down for several hours while the bulk of the oil was drained from the piping. When the system started back up, the plant had to deal with excess oil in the system, which was trapped in the pores and rough surface of the degraded pipe. 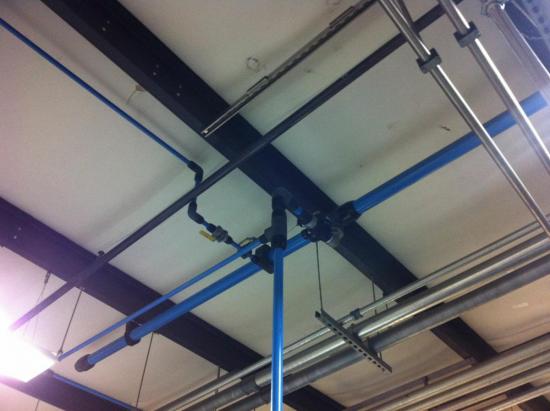 The company turned to a local compressed air vendor to properly size and configure the pumping system. They focused on improving the reliability of the pumps, thereby reducing the annual maintenance costs associated with replacing failed pumps.

Diaphragm pumps are typically rated for a maximum pressure input. This is the pressure at which it is safe to operate the pump. The pumps also typically have a minimum input pressure, which is the pressure below which the pump may stall or cease to operate properly. The pump speed changes with pressure, and the pump flow rate changes accordingly. Therefore, the pump speed and duty can be significantly reduced, saving energy at the cost of time.

If the time penalty is acceptable, then the pressure reduction can yield a significant savings. The company decided that they could reduce the line pressure from 100 psig to 55 psig with no negative impact on production (Figure 4). 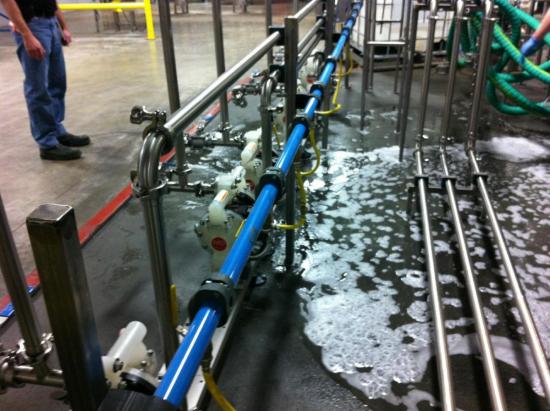 The existing system’s average pressure was 100 psig, which included about 5 psig of drop through the treatment equipment, and a 10-psig differential from the load/no load controls. This meant that while the compressors were modulating between 100 and 110 psig, the header was seeing a pressure range of 95 to 105 psig. The additional pressure drop of 5 (or more) psig from the last “dirty thirty” (3) meant that end uses were receiving about 90 psig before the trim compressor loaded, and about 100 psig before it unloaded.

The highest pressure end use in this facility includes a set of electropneumatic positioners for pneumatically actuated control valves. These positioners become unreliable when the supply pressure drops below about 90 psig. If one of the positioners fails on low air pressure, it could cause a production line to shut down or generate scrap products. The header pressure was apparently set to provide a minimum of 90 psig to these controllers.

Most of the end uses in the facility, however, were regulated in the range of 55 to 80 psig. The intrinsic air consumption of the electropneumatic positioners is zero cfm (4), since their method of operation is to position an actuator. As long as the actuator is in the same position, no air is consumed. This is the definition of a “flow static” application, which made it a perfect candidate for a pressure booster. A 2:1 pressure booster regulator (5) was installed at the bank of positioners, and set to an operating pressure of 95 psig, ensuring sufficient supply pressure for the devices. The plant header pressure could then be dropped to 85 psig, allowing for a 5-psig drop to the end uses regulated to 80 psig. Plant pressure is regulated by the original pressure/flow controller (Figure 5). 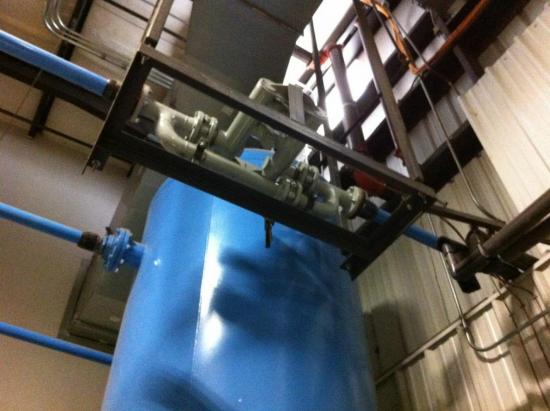 The two wet storage tanks were removed completely from the compressor room. While this is not a common measure, it made sense in this case. With VSD compressors, the added system volume increases the ride-through time available if the main compressor unexpectedly goes offline and the backup has to start (6), but there is no energy efficiency benefit.

The added storage capacity also came with a significant number of valves, fittings, and potential maintenance issues. Removing these extra tanks simplified the compressor room piping (Figure 7), eliminating the pressure drop associated with them. It also eliminated the need for the two extra ASME pressure vessels to be annually inspected and certified. 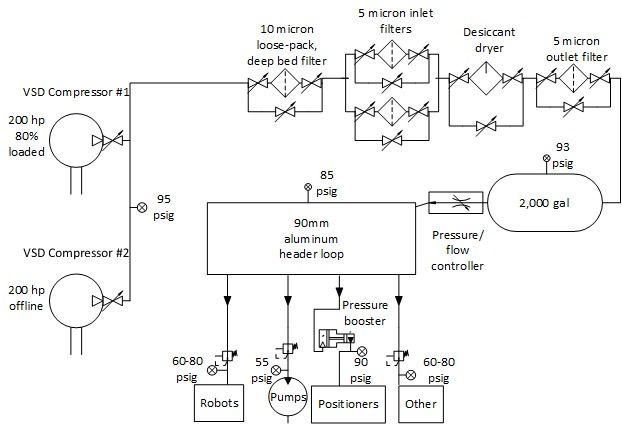 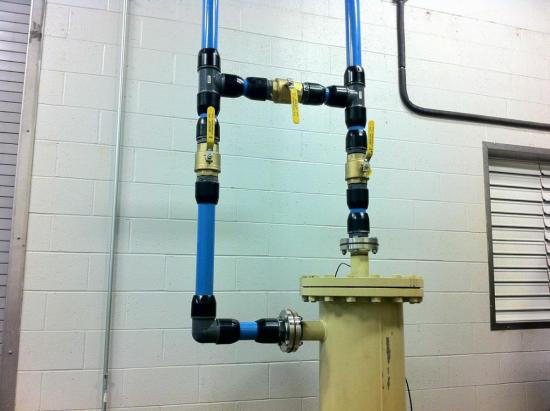 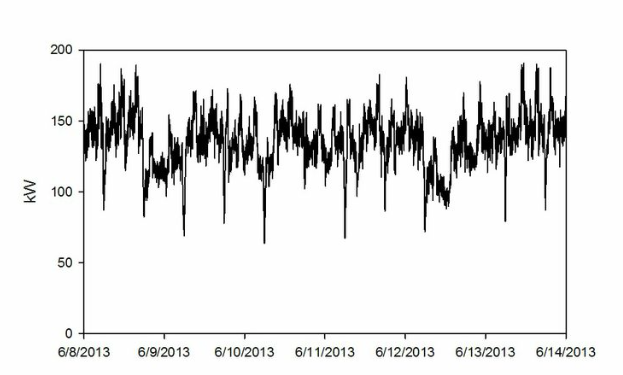 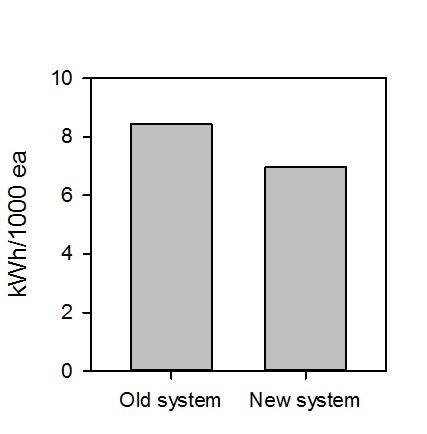 An annual energy savings of over 242,000 kWh was achieved, representing about 17.2 percent of the baseline compressed air energy usage. The average power was also reduced by 47.3 kW between the two logging periods, so the annual demand savings is likely on the order of 500 to 600 kW-mo/year. 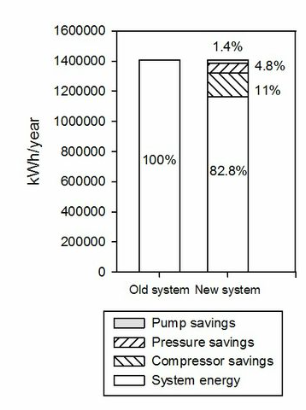 The other 4.8 percent of the baseline system energy usage was saved through the combination of the reduction in artificial demand due to the header pressure reduction and the decreased friction in the new aluminum piping. At an average cost of \$0.072/kWh, the project reduced the annual utility cost by just over \$19,000.

The maintenance savings detailed above amounted to an annual savings of nearly \$7,000. When all four stages of the project were considered, and the utility rebate included, the total cash outlay for the company was just over \$70,000, which yielded a simple payback of just less than 3 years.