Power Smart® efficiency measures for compressed air systems at Tolko’s paper mill and sawmill at The Pas are saving the company more than \$125,000 a year.

The measures were introduced based on the findings of compressed air system audits of both mills. They were also inspired by two Manitoba Hydro sponsored seminars on compressed air, which Tolko staff attended.

“As a result of the seminars and audits, we took a systems approach to solving our problems,” says Darryl Sorochuk, Assistant Superintendent of Steam and Recovery for the paper mill.

“The result was a series of system refinements, from fixing air leaks to installing air storage, which let us turn off compressors instead of adding new ones.” 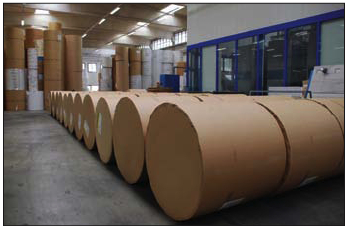 Steel Strapper—In the paper mill, a critical user of air proved to be a steel strapping machine that prepares paper rolls for shipment. At the downstream end of the compressed air distribution system, the strapper needed constant pressure but not high volume to work properly.

To keep pressure up at the strapper, the air system was operated at excessively high pressure. But even the higher pressure dipped when large volume air users came on. Tolko solved this critical use problem by installing a dedicated storage tank to serve the strapper. The strategy allowed a reduction in overall system pressure.

Air leaks and open drains were accounting for about 35% of total air usage.

As Sorochuk points out, “For each additional psi, we were losing about one per cent more air through leaks, including open drains that we used to purge water from our lines.”

Air leaks were tracked down with an ultrasonic detector and repaired. Open drains were closed, or automatic traps were installed to expel water, with no of loss of air.

Air Dryer—One of the air audits turned up a major problem with a small desiccant dryer. Because of a malfunction in its control system, the dryer was consuming 15 times more purge air than necessary to regenerate its desiccant. The malfunction was easily corrected, for major savings.

Shutting Down a Compressor— Before de seminars and audits, the paper mill ran four, 200hp reciprocating compressors, backed by a spare rental diesel compressor. Following efficiency measures, one of the top 200 hp compressors was turned off and the rental unit retired.

Moisture and Pressure Problems—The sawmill, in a building separate from the paper mill, had its own compressed air system and own set of problems. Excessive moisture in the lines fouled critical machinery and froze during cold weather. Air pressure underwent major swings, from 110 to 60 psi and back, sometimes in seconds.

A decision had been made earlier to buy a standard heatless desiccant dryer to produce cleaner, dryer air to run the sawmill. Eric Scheffers, Project Superintendent, contacted Manitoba Hydro for help in sizing the dryer.

“Manitoba Hydro helped us confirm dryer sizing,” he says. “They also ran a full system audit that showed us how to address our pressure swings in an energy efficient way.”

Little Storage—The sawmill had very little air storage for an operation of its type. When large, short-duration air demands hit the system, pressure collapsed because the compressors could not keep up.

The system now runs without moisture problems, at 85 psi.

Efficient Dryer—On Hydro’s recommendation, the sawmill installed a heated blower-type desiccant dryer with an energy management system. Instead of drawing 225 cfm of compressed air to regenerate the desiccant, the new dryer uses an internal heater and ambient air.

It also regenerates the desiccant only when necessary, not on a fixed cycle as in a standard dryer. This lets the sawmill stretch a normal four-hour drying cycle into 60 hours during low load periods, for additional savings.

One of the most important steps that Tolko took, based on the seminar's recommendations, was to organize a compressed air team. The team meets regularly to discuss concerns and improvements to the company’s compressed air systems.

“We learned that we needed to keep everyone involved in making overall system refinements. It pays off in lower energy consumption.”

He adds that they are also using some of the concepts they learned at the seminars to reduce their water consumption — a major expense.

Ron Marshall, a Manitoba Hydro Industrial Systems Officer who performed one of the system audits, says: “System improvements at the paper mill and the sawmill save Tolko over \$125,000 a year in avoided compressed air operating costs. They have also greatly improved air system quality and pressure.”

“Tolko has proven they can solve process problems in an energy efficient way,” says Marshall.

“Process improvements can sometimes be more important to a company than energy savings.”

Plans for the paper mill include adding air compressor controls, more storage, and an expander.

For the sawmill, Tolko is thinking of adding compressor controls, addressing leaks, and applying measures to smooth out peak demands.

At both locations, Tolko may install high efficiency specialty nozzles to optimize cleaning and blowing operations.

To read similar articles about the Paper Industry, visit https://www.airbestpractices.com/industries/paper.