Compressed air is used in a number of processes in the food industry. It is used as an ingredient in whipped products such as ice cream, to slice or cut soft products and to open packages before filling of product. Currently, food manufacturers are under pressure to validate the safety of all ingredients or processes for regulatory compliance, but unfortunately, there is currently no standard method to evaluate the microbial content of compressed air.

The challenge to sampling compressed air is it must be decompressed prior to sampling. The Andersen One Stage viable particle sizing sampler is an impactor developed with the National Institute for Occupational Safety and Health (NIOSH) and is an approved method for bioaerosol sampling of non-compressed air by the Environmental Protection Agency (EPA), Occupational Safety and Health Association (OSHA) and the Food and Drug Administration (FDA)¹. The Andersen single stage sampler has 400 holes with a cut off diameter of 0.65μm and designed to sample aerosols of bacteria from air at atmospheric pressures (Figure 1). By comparison, The CAMTU was developed by Parker Hannifin for direct testing of compressed air and collects bacteria due to positive pressure from the compressed air pushing the bacteria onto the plate (Figure 2). The level of impact stress has been shown to effect microbial recovery on agar and be dependent upon the impaction velocity of the cells into the agar as well as the design and operating parameters³. For this reason, it’s important to characterize the recovery efficiency of the CAMTU against a standard method such as the Andersen sampler. 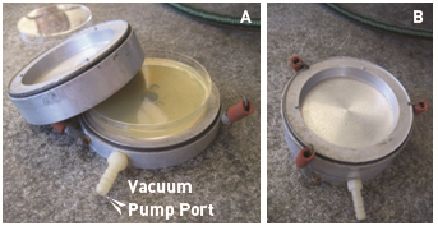 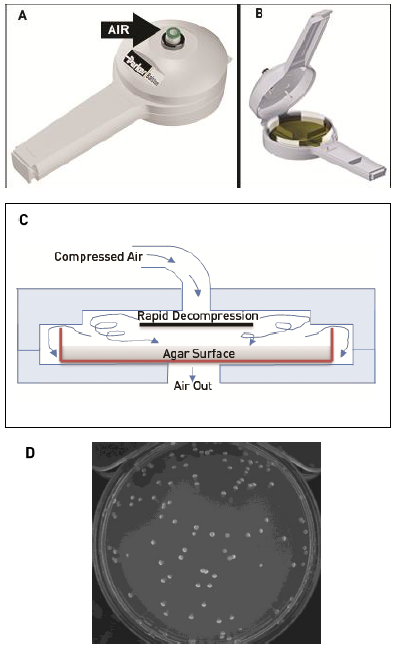 The Gram positive, non-sporeforming bacteria Micrococcus luteus ATCC 4698 was used as a model organism for this study. This organism has been used by others to compare recovery of bacteria from aerosols³ and in general has a round to slightly elongated round shape with a diameter between 0.5 – 1 μm (Fig 3A). Cells of this organism after growing in broth can exist as single cells, groups of tetrads (4 cells, arrows in Fig 3B) or clumps (Figure 3A and 3B). Bacterial stocks were stored at -80 ˚C in 10% glycerol. Each month, tryptic soy agar (TSA) slants were inoculated from frozen stocks and incubated at 32 ˚C for 18 h. These working culture slants were stored at 4˚C. Broth cultures for each experiment were prepared by inoculating a loopful of working culture into 50 ml tryptic soy broth (TSB) and grown with agitation (200 rpm) for 18 h at 32 ˚C. Initial cell numbers in the overnight culture were determined by dilution and spiral plating (Spiral Biotech1) onto TSA agar and incubated overnight at 32 ˚C. Cell numbers were determined using automated plate counting (Q-count, Spiral Biotech).

The instrumentation set up as diagramed in Figure 1. An biological aerosol was generated using a high pressure nebulizer with 45 psi (310 KPa) air pressure moved over a container of DRIERITE gypsum desiccant (W. A. Hammond Drierite Co, Xenia OH) to remove excess moisture in the system and then connected back to 40 psi (275 kPa) of air moving through a bypass. Within the sampling box, two Andersen single stage viable particle sizing samplers were used at a flow rate of 0.9994 CF/min (28.3 L/min)¹ or by direct sampling of air using CAMPTU at a flow rate of 16.1 CF/min (456 L/min).

Each experimental day, a sterile nebulizer, flow rate meter and tubing was used. Sterile controls were always run first and then a single concentration of bacteria was added to the nebulizer and varying amounts of air was sampled. Depending on the experiment, bacteria were either diluted in buffered peptone water (BD) or used straight in TSB. Prior to and after to each sampling, the weight of the nebulizer and inoculum was measured, to track total volume lost during each sampling run.

Samples were taken from sterile controls to least sterile:

Sterile TSA plates were placed into ethanol sanitized Andersen impactor units. For each test, the compressed air was turned on and the system (air, nebulizer) was run for 1 min with a measured flow rate on 1.8 L/min, after which the vacuum pumps attached to the Andersen Impactors would be manually started, and then turned off at the desired time using a timed switch after 32, 64, 128, or 256 seconds. Two units were run simultaneously, to give duplicates for each sampling time. The air pressure and flow rates were recorded for each run. After sampling, agar plates were removed, and Andersen Impactors and sample box were wiped down with 70% ethanol, and fresh plates were added. Before and after each sampling run, the nebulizer was weighed to calculate the approximate volume of liquid nebulized in each run. After each run, the used liquid was removed and replaced with a fresh bacterial solution for the next sampling run. Plates were incubated at 32 ˚C for 24h. Colony numbers were determined using automated plate counting system (Q-count, Spiral Biotech).

Sterile TSA plates were placed into ethanol sanitized CAMTU. The CAMTU setup as the same as the Andersen Impactor units, except rather than decompressing the air in the box, the compressed air was directly attached to the CAMTU. The flow rate into CAMTU: 1.6 CF/min and timing was started at the initiation of air into the nebulizer. Sampling times on the CAMTU were adjusted to obtain similar volumes of air on to those sampled with the Andersen Impactor and were performed for 20, 40, 80 or 160 sec. After sampling, agar plates were removed and the CAMTU was wiped down with 70% ethanol, and fresh plates were added. Before and after each sampling run, the nebulizer was weighed to calculate the approximate volume of liquid nebulized in each run. After each run, the used liquid was removed and replaced with a fresh bacterial solution for the next sampling run. A single CAMTU unit was used and each sampling time was performed in triplicate, with fresh bacterial solution in the nebulizer for each run. Plates were incubated and counted in the same manner as described with the Andersen Impactor unit.

In order to sample compressed air, initially it must be decompressed to atmospheric conditions. There are a several air sampling units commercially available, many of which have chambers decompress air then utilize pumps to sample the compressed air. These units are often large laboratory bench models, which limited their usefulness in food processing plant environment. The CAMTU is designed to have air de-compressed above a disk suspended over an open petri dish (Fig 2C) and the compressed air decompression propels the microorganisms onto the surface of the agar and eventually exits the unit through channels under the petri dish. The colonies recovered from the agar surface appear to be distributed over the entire agar surface rather than just at the edges (Fig.2D), indicating that there is likely random, turbulent airflow during the microbial sampling.

It should be noted, that during preliminary testing of the CAMTU, we observed if moisture was accumulating in our flow meter (an indication of moisture in the aerosol), rather than discrete colonies on the agar surface, smears were observed after incubation. To remedy this issue, the aerosols were dried over desiccant to remove excess moisture, although some bacteria were likely to have been removed in this step. Based upon this observation, we believe the CAMTU is not is not suited to sampling compressed air with high levels of water or other liquids.

The efficiency of the CAMTU to the Andersen single phase sampler for sampling bacteria from aerosols was compared using M. luteus using a system outlined in Figure 4. The results from two replicates of this experiment are presented in Table 1. In the first replication, the CAMTU recovered approximately 17-50 more CFU than the Andersen impactor. In the second replicate, both recovery systems performed similarly. 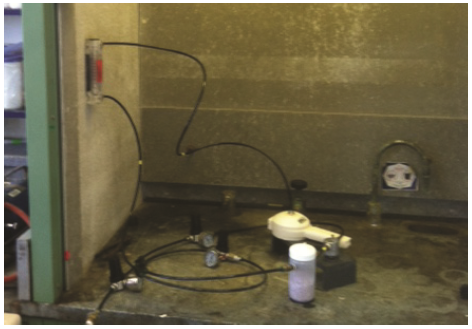 Figure 4: Set up of bacterial nebulization and sampling system

One concern with the CAMTU was the possibility that the high pressure air impact with the agar would destroy and reduce the number of bacteria recovered, however, the results presented in Table 1 indicate the CAMTU has similar recovery of M. luteus to the Andersen impactor. 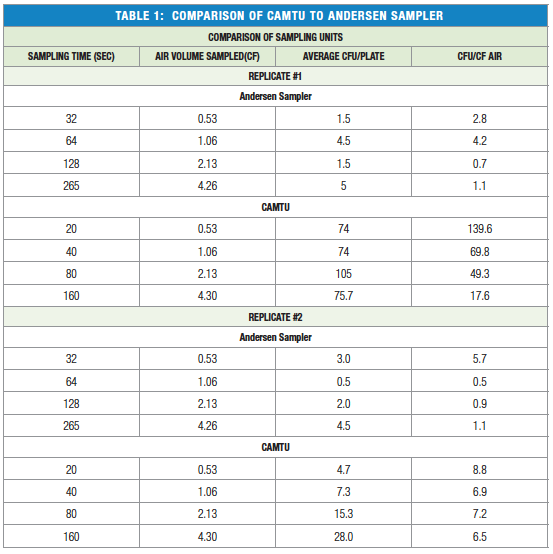 This study has shown similar recovery of M. luteus from compressed air using both methods. Since bacteria spores are more resistant to aerosolization stress, we assume that the CAMTU will also have similar recoveries of bacterial spores to other air sampling methods. One potential shortcoming of this study is that only one organism, a Gram positive vegetative bacterium was used for testing. In general, Gram negative bacteria vegetative are more sensitive to stress during aerosolization and to structural injury when collected on agar³, it is currently unknown if there would be similar recovery from both the Andersen impactor and the CAMTU. Another potential shortcoming of this study was that the bacterial aerosols were not ‘discharged’ after aerosolization, therefore the airborne bacterial cells may be highly charged. When compressed air was discharged into the HDPE sampling box there is always the possibility that a portion of the aerosolized bacteria were lost due to adhesion to the box walls by electrostatic interactions⁴ and could be a potential source of experimental error.

The CAMTU sampling device has the potential to be a highly valuable tool for testing the microbial load of compressed air. It has the advantages that it is simple and portable, in that is does not require a power source or external power source and can be used for sampling of compressed air on the food processing environment.

Since the CAMTU uses a standard petri dish for sampling , it can be used for performing different types of microbial isolation by, for example, using Rose Bengal-Streptomycin agar for selective collection of airborne for yeast and molds².