Instrument Air and Breathing Air at a Pharmaceutical Plant

The company is a large multinational pharmaceutical firm that extracts beneficial health products from animal byproducts.  The Plant A compressed air supply was originally set up as two separate systems, one providing instrument air, the other breathing air for laboratory purposes.  The Plant B system used a combination of both lubricated and lubricant free air compressors, sized between 15 and 60 hp, each with its own desiccant air dryer. 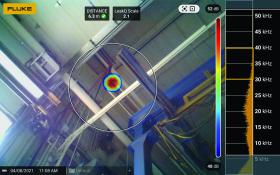 Supply side measurement of the Plant B system was initially done in 2004, when the plant was much busier and had higher average compressed air loading than current conditions. Figure 2 shows a snapshot of a production day, fairly constant loading, caused by dryer purge and cabinet venting, with only a short period of production mid-day. It can be seen that the 15 hp air compressor starts and runs unloaded for some unknown reason part way through the week, reducing the system efficiency. Some fluctuations causing low pressure can be seen during the day. Analysis ultimately showed the small compressor could be used to feed non-production flows rather than running the large 60 hp compressors and dryers. 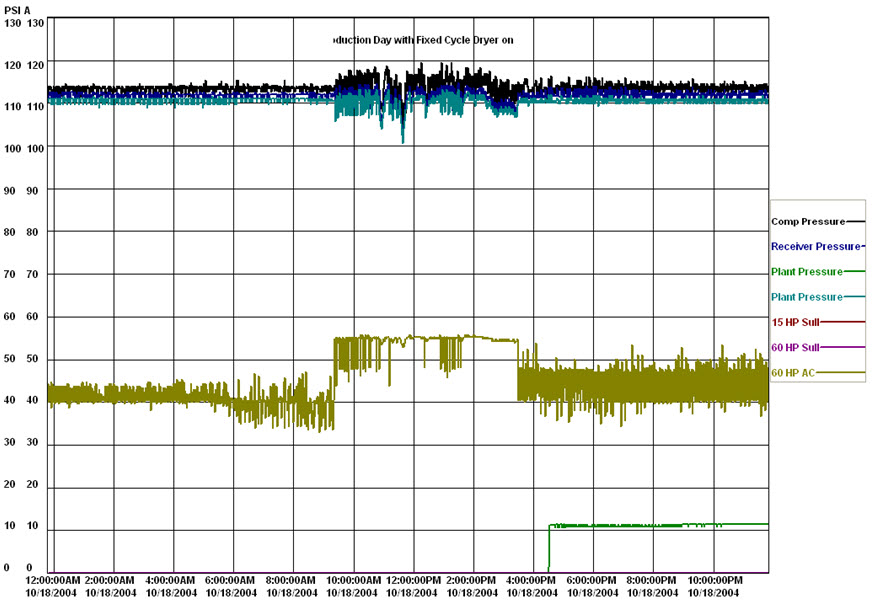 It can be seen in Figure 3 that the pressure profile during a production day was being greatly affected by a dominant end use which was traced to a sparging application mixing some chemicals in a storage container.  This operation started as required during the production day and was set up with a pressure switch cutoff interrupting the flow of compressed air if the plant pressure fell too low.  A second end use was found that used compressed air to agitate the wastewater in a pit for odor control.  These end uses forced the compressor discharge levels to be much higher than required.

At the time of the assessment, based on the amp readings, the system flow was estimated at 264 cfm peak and 111 cfm average.  Power consumption was estimated at 31 kW consuming about 181,000 kWh per year.  System specific power was estimated at 28 kW/100 cfm (not including air dryer purge), a normal reading for an optimized system would be under 20 kW/100 cfm. 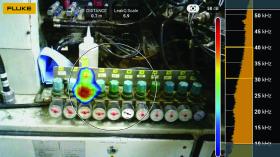 Detailed analysis was done to estimate the compressed air uses making up the demand.  Based on various special tests and flow measurements the following constituent of demand profile was created:

It can be seen the plant has a low level of leakage, which shows excellent maintenance practices, but that there are two dominant loads, cabinet purge and air dryer purge.  The cabinet purge is a small amount of air that is introduced into electrical panels in areas of high solvent content.  This positively pressurizes the panels to keep explosive vapors out.  This is for safety, after much research it was found that this load had to remain.  The air dryer load, however, was due to fixed cycle operation of two heatless desiccant air dryers.  A retrofit could be done to add dew point controls onto the dryers.  Further to this the sparging loads could be addressed using pumps and blowers.

The following was the annual power consumption of Plant B:

The original audit only monitored the compressed air system in Plant B of the facility.  Two additional systems existed in Plant A that were initially thought by plant personnel to be running efficiently, therefore no initial audit was done during the initial plant assessment (the auditor wanted to measure these but wasn’t allowed).  A few years after the original study all systems were revisited just before Plant B was optimized to determine if there were potential savings opportunities.

Figure 6 shows the results of the monitoring.  A site breathing air system consisting of a single 40 hp modulating compressor and an oversized fixed cycle desiccant air dryer was running at very poor specific power, an unbelievable 204 kW per 100 cfm once the air dryer purge was taken into account (production specific power was 58 kW/100 going into the air dryer).  Similar problems existed in an instrument air system in Building A, and the originally studied system in P B.  Plant B system efficiency had actually decreased due to lower loading, a characteristic of load/unload control. 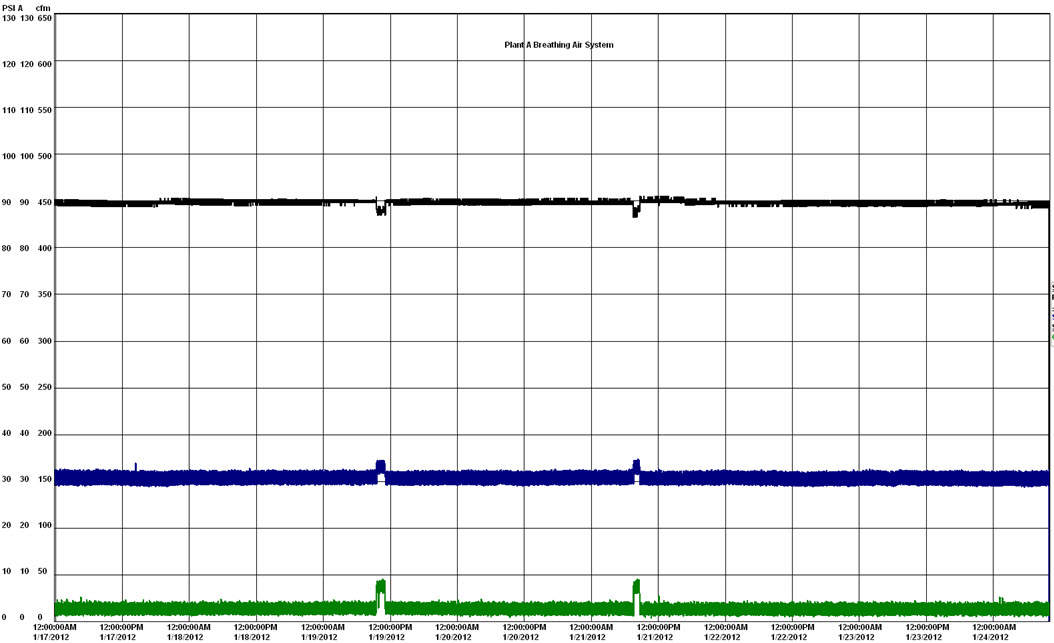 The plant personnel made the following improvements

Additional measurements were done to verify the savings for this project.  The final outcome was as follows:

This project showed that assumptions should not be made about the efficiency of systems.  Originally the systems in Plant A were not considered for optimization based on some faulty assumptions.  However, once measurements were done, it was obvious to the plant personnel that more savings could be gained on that system than the original Plant B system.

The results also showed that desiccant air dryers are often the biggest end use of compressed air in the plant, and that something can be done about the purge air loss.