Sometime in mid-2015, I received a call from a project engineer at a major plastics firm. He had a troubling issue with one of his PET bottle plants. The bottom line was this: They could not run all five high production blow-molding machines at one time—even though they were able to do so 18 months previously.

Obviously the first area to evaluate was compressor room to make sure the air compressors were as close to 100 percent as they could be based on their age, and to ensure there were no excessive pressure drops in the cleanup equipment. Even after the factory technicians rebuilt the air compressors and the filters were changed, there was still no improvement

Nothing had changed in the production area—no new equipment was installed, and bottle sizes remained the same. The only positive changes were that the piping had been looped, and leaks in the piping system had been found and addressed.

If nothing had changed in the compressor room or in the production area, what was going on? After much debate, it was determined that an outside resource needed to be brought in to do the detective work and make recommendations. The following article provides an overview of the system, and the steps taken to identify the issues—along with final recommendations. The moral of the story? The culprit of your compressed air system problems is not always in the compressor room…

The compressed air system at this PET bottle plant consists of two Bellis & Morcom water-cooled reciprocating air compressors. The WH40 H3N is rated for 400 kW (550 nameplate motor horsepower) with a capacity of 1135 acfm, and it is used as the trim unit.

The base-loaded unit is a VH18 H3N Bellis & Morcom water-cooled reciprocating air compressor with a rating of 205 kW (300 nameplate motor horsepower) with a capacity of 519 cfm.

There are five SIPA blow-molding machines, an HS, an FX, and three SFLs. Any four blow-molding machines could be in full operation, but starting the fifth unit resulted in the air pressure falling to a level of 551 psig, whereupon the FX blow molder would electronically sense the low pressure and shut off.

The projected consumption of 1656 acfm versus the capacity of 1654 acfm from the combined output from both air compressors leaves very little margin for error in the compressed air system. As previously mentioned, a service crew had recently overhauled the air compressors prior to our arrival, and the air compressors appeared to be operating at optimum performance.

Audit Methodology—What Did We Do?

The Money Meter—kW Monitoring: We measured kW on the WH 40 and VH18 during the course of investigation to determine power savings, using a recording kW meter for the duration. A sample can be seen in Figure 1. 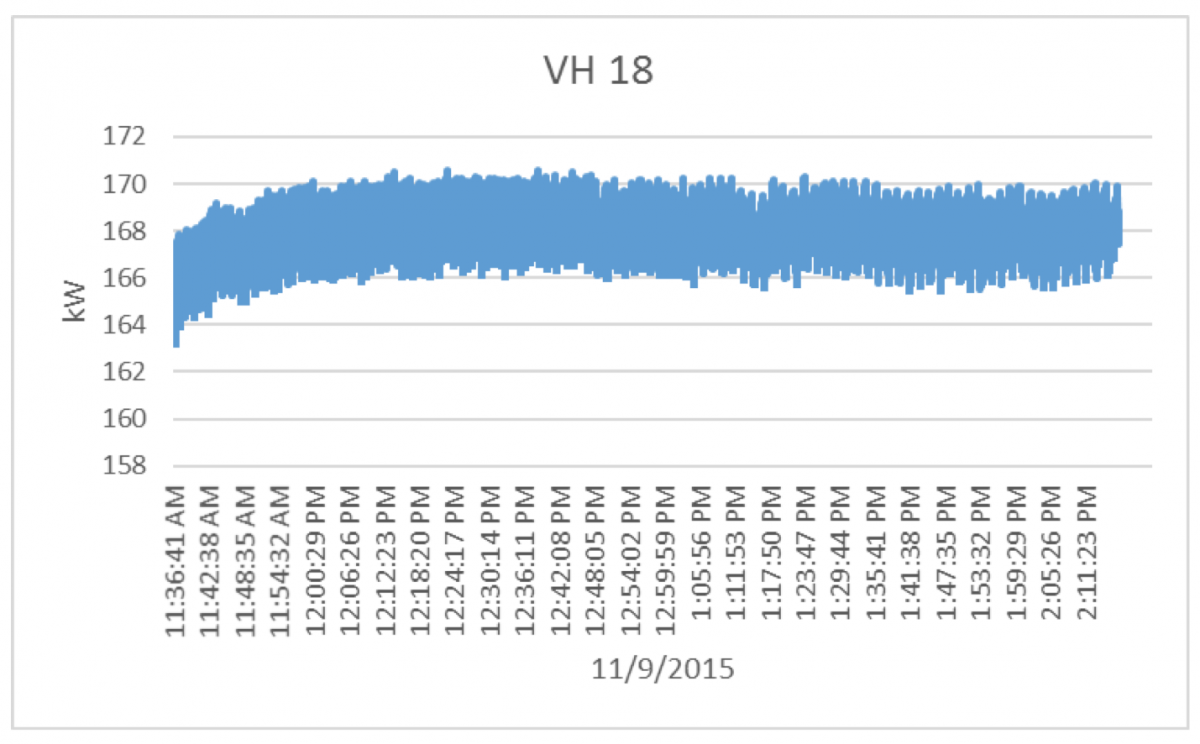 The System Detective—Pressure Monitoring: A pressure transducer was installed on the WH40 prior to the compressed air dryer. Pressure for load and unload on the WH40 air compressor varied from 555 to 600 psi, as recorded by our transducer, which was set to record at 1-second increments.

After installation of this pressure transducer, we started to observe the effects the five blow molders had on the compressed air system. The pressure varied by over 120 psi and caused the FX blow molder to go into default due to low pressure.

The Real Information—Flow Metering: We initially installed a 1.5-inch CDI flow meter on SLF2. This machine had a leakage rate of 78 cfm, and had a flow of 270 when operating, including the air leakage.

Next we moved the CDI flow meter to the SFL 1 blow molder to determine leakage on this machine. We recorded a leak rate of 77 cfm before the machine was restarted with a 224 cfm total operating flow, including leakage. It is important to note that this measured flow is below the flow of 420 cfm listed in the technical data from SIPA.

When the SFL 1 blow molder restarted, it was found that there was a 20-psi pressure differential recorded on the downside of the regulator versus the pressure reading at the WH40 air compressor (As shown in Figure 2). This was a major concern. 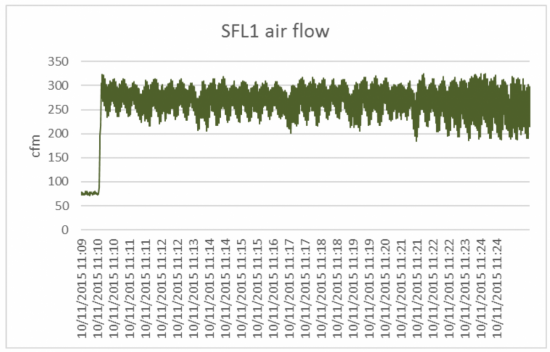 Figure 2: The graph above shows the airflow in cfm of the SFL1 blow-molding machine.

The meters were essential in identifying the volume of leaks on all the molders when the unit was pressurized but not operating.

The leak measurement indicated that 39 percent of the total compressed air production was lost to leakage. There was no way of knowing this leakage until the flow meters were installed on each blow machine. The leakage proved to be a major impediment to proper pressure from the air compressors in order to maintain production. At an electrical rate of \$0.052 per kWh, this leakage would cost \$81,700 per year.

The length of the main overhead 3-inch pipe is equal to about 633 linear feet. With the existing 20-psi pressure differential on the WH40, the main header provides a capacity of only 44.8 cubic feet. Storage only occurs when there is a pressure differential. Based on how this system was operating, there was no storage in the overhead lines when the system reached the low-pressure level and the compressor prepared to load.

Gauges installed on the SFL blow molder’s filter identified that a pressure differential was the result of the compressed air not being able to pass through the filter and regulator at a rate to satisfy the immediate flow requirements of the blow molder. It was calculated that the flow was at a rate of 20.65 feet per second (Multiplied by 60 seconds = 1239 cfm). This calculation was performed by taking the cfm flow meter readings combined with the pipe size to determine the feet per second in the section of piping. The Department of Energy’s Compressed Air Challenge recommends that any velocity in excess of 20 feet per second will result in a pressure loss.

The existing 1.5-inch pipe delivering air to the molding machines would have a velocity of 44.32 feet per second at pressure of 470 psi with a flow of 1239 cfm. At the high end of the pressure range, the Bellis & Morcom unloaded at 570 psi, and the velocity would still be too high at 36.7 feet per second.

Any pressure regulation must be done slowly and methodically. The air compressors originally loaded at 570 and unloaded at 595 psi respectively.  The five blow molders ended up operating at 464 psi for an extended period of time and still produced quality bottles. Figure 3 shows the WH40 load rate prior to lowering the pressure, and Figure 4 shows the load rate after the pressure was lowered and the blow machine’s regulators and filters were bypassed. 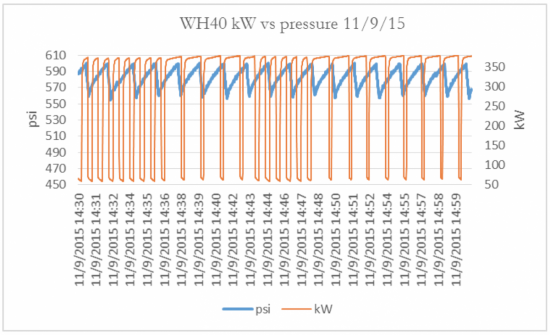 Figure 3: This graph displays the kW and pressure readings of air compressor WH40 prior to pressure-reduction measures. 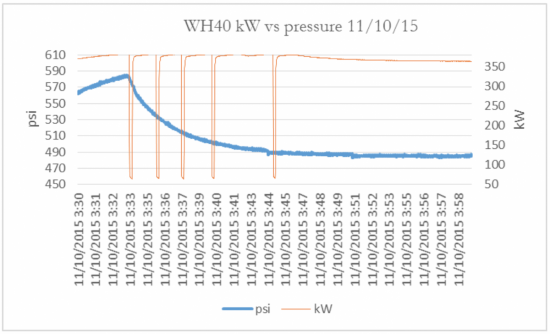 By repairing some of the blow machines’ internal leaks, bypassing the filters, and lowering the pressure, all five blow machines could be run for normal production and achieve the proper quality. However, this was not a long-term solution.

Implement Leak Reduction Program: The total leakage measured by a flow meter was 656 cfm. At an electrical rate of \$0.052 per kWh, this leakage costs \$81,743 per year. The plant needs to implement a blow molder leak reduction program with an appropriate budget to monitor and repair leakage on all of the blow-molding machines and the compressed air piping system. Flow meters, which cost \$3100, should also be installed on each of the five blow molders. Those devices should tie into the building information system or standalone data loggers. The ROI of these actions is approximately 0.5 months.

Install Air Receivers at Points of Use: Installing a 200-gallon air receiver at each blow machine will allow for pressure reduction and adequate flow. It will also maintain pressure at each machine for product quality stabilization. With an estimated investment of \$30,000, the direct ROI is approximately 14 months—not including product quality improvements and an increase in production.

System pressure was 580 psi, and it is now operating between 465 and 500 psi—while maintaining production quality. This pressure reduction eliminated 213 cfm of compressed air consumption, equaling \$27,331 per year (at \$0.052 per kWh, based on present compressor efficiency).

Use Flow Meters for Preventative Maintenance: Compressor output may be questionable—even though it was recently serviced. Flow meters should be installed on the 3-inch line after each compressed air dryer to monitor compressor output and determine when service is required. The flow meter investment would require a total of \$2000, resulting in a potential ROI of 1 year to be verified by reduced maintenance over the next year.

Install Air Receivers Before Main Piping: With the air compressors cycling rapidly, they are sustaining excessive wear, and operating at a higher kW. To solve the issue, the facility should install a 1060 gallon high-pressure air receiver after the air dryers, along with a demand controller. With an investment of \$30,000 for the air receiver and controller, the potential ROI would be under 2 years due to reduced maintenance on the air compressors and a lower system pressure.

Implement Leak Detection Program for Low-Pressure System: As previously noted, the operational air leaks are substantial on blow machines and the ancillary equipment fed by the high-pressure compressed air system. Flow meters should be installed on the 4-inch, low-pressure line from the low-pressure air compressors. Requiring an investment of \$1300, the ROI would be under one year with the implementation of a leak remediation program.

During our audit, the demand-side demons were found, and some of them purged within 72 hours. Lowering system pressure and opening the bypass on the regulator/filters helped. However, the immediate actions that allowed the five blow molders to be put back into production actions were not the permanent fix.

The key is to implement changes required for long-term stability of the system with the existing air compressors. Any system that has borderline capacity as compared to requirement absolutely has to be monitored, because demand-side issues create operational problems. If the changes are not implemented, the system will slide back into the same situation as before—leaving it without a sufficient supply of compressed air.

If you have an issue involving PET bottle blowing or system capacity, you may have a hidden problem on the demand side. First look for obvious issues outlined in this article, If you need additional help, contact an auditor that you trust.