PET Power Containers, a Canadian manufacturer of PET plastic containers, had plans for expanding its operations with the addition of more blow-molding equipment. Before the expansion could happen, however, the company needed to assess its compressed air system. Based in Vaughan, Ontario, PET Power provides a dizzying array of differently shaped and sized plastic bottles. Their operations run 24/7, and compressed air plays a key role in their primary manufacturing applications, including PET blow molding, PET preforming, and labeling bottles.

PET Power Containers is a Salbro Bottle company based in Vaughan, Ontario.

All problems considered, there was no way the existing system would accommodate plant expansion. Several solutions were implemented to optimize the compressed air system, including the installation of a SIAD Vito 1330 reciprocating air compressor, a cycling refrigeration dryer, and multiple zero air-loss condensate drains. On its own, the installation of the SIAD Vito air compressor will save PET Power Containers an estimated 534,239 kWh annually, or about \$53,424 per year (at \$0.10/kWh). The retrofit also qualified for a rebate of \$109,600 through the local utility company.

There are two types of PET blow-molding operations. The first is single stage, where the preform is manufactured in the blow-molding machine itself. One side of the machine performs the injection molding, and the other side blows the molds to form. The second type is two stage, where the preforms are fed into the machine from a different source. PET Power Container is a two-stage PET manufacturer. The company manufactures its preforms separately, feeding them into the blow molder as a separate process. With prototyping and 3D printing capabilities, the company can also design all of its own molds in house.

PET Power Containers manufactures bottles sized anywhere between 8 and 128 oz. As its operations grew, the company started manufacturing more large bottles, consequently increasing demand for high-pressure compressed air. The plant also planned to expand its blow-molding capabilities with two to four additional blow-molding machines. Since the two existing reciprocating air compressors had been in the plant since 2002, plant management decided to assess the entire compressed air system prior to expanding.

During a comprehensive seven-day audit, de Souza measured the compressed air system’s baseline energy efficiency, assessing both the supply and demand sides. During his assessment, specific energy conservation measures (ECMs) were identified, and retrofit projects were proposed to hit target ECMs. All proposals included critical information about energy costs in order to make the opportunities eligible for local utility incentives through the Save ON Energy RETROFIT Funding Program.

Establishing the Baseline for Incentive Opportunities

Determining the Details of the Compressed Air System

Based on data gathered during the compressed air audit and extrapolated over the plant’s 24/7 operations, de Souza calculated that the plant runs approximately 8,760 hours per year. To determine the running efficiency of the air compressors, voltage meters were used to measure the voltage to the load/unload solenoid valve. When the solenoid was energized, the air compressor went to 100 percent load. When de-energized, the unit unloaded. This technique helped to determine the FAD at 30-minute and 1-hour intervals. The measurements indicated that the two existing air compressors were operating at a worse specific power (kW/100 cfm) than anticipated. According to plant maintenance, modifications had been made to the air compressors, and they were de-rated accordingly. Operating data can be seen in Chart 1.

The piping and drainage systems also had issues. Large amounts of moisture were found in the compressed air piping—a damaging condition that could potentially lead to corrosion. Water could also backfill the air compressors when in idle or standby mode. In addition, the drains on the system were problematic, as manual draining was needed on a daily basis. The supply piping system header, which feeds the plant machinery, was 2 inches in diameter. Where the Compressed Air Challenge recommends the supply header to deliver compressed air at 20 fps, the plant’s system was calculated at 8.56 fps. Finally, a leak detection sweep identified one major compressed air leak resulting in an estimated leakage of 15 to 20 cfm.

As initially discussed, PET Power Containers planned to expand current production with the addition of three to four blow-molding machines. The system assessment determined the current compressed air system would not be able to satisfy the expanded compressed air demand. Using estimates from the initial audit, the plant would add approximately 62 to 124 cfm of demand—for two or four new blow-molding machines respectively. To accommodate the increased demand, PET Power would likely purchase a used reciprocating air compressor to add capacity. If used in conjunction with the existing air compressors, it would result in the following inefficiencies:

The following recommendations were made to improve the compressed air system at PET Power Containers. If implemented just for the existing system, the projects would save the company approximately \$36,929 annually in energy costs (10 percent safety factory included). However, with expanded plant capacity, the recommendations would save PET Power \$53,423 annually, and still provide capacity for additional expansion.

The new SIAD Vito 1330 retrofit would handle both the plant’s current load and the load from additional blow-molding equipment—all from one air compressor. This would also leave PET Power with a partial backup compressor system in one of the original air compressors. Because the Vito has a VSD, it could be programmed to run at a target pressure on weekdays, and a different target pressure on weekends, maximizing the energy efficiency in both cases. 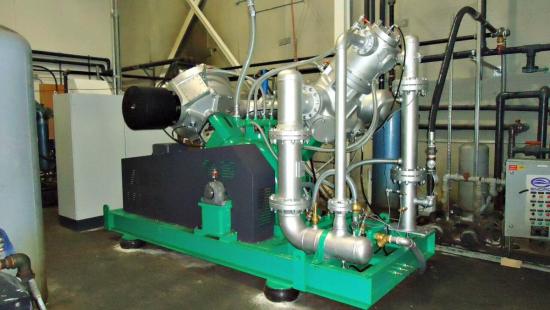 Altogether, the SIAD Vito Retrofit Package included the new air compressor, a new refrigerated air dryer, zero air-loss condensate drains, and a replacement of all piping on the supply side. Energy savings from the zero air-loss drains were calculated into the energy incentive report as part of the 10 percent correction factor. Unfortunately, energy savings from the new refrigerated dryer were not calculated, as the original dryers were not metered. The energy savings calculated to earn incentive funding—as shown in Chart 2—resulted in \$109,600.

Room for Expansion with the New SIAD Vito Air Compressor

As a result of the compressed air system retrofit, the staff at PET Power Container could not be happier with the services rendered by Compressors aiR Us, Inc. Shannon de Souza and his team worked tirelessly to optimize the system, and get the new air compressor up and running. 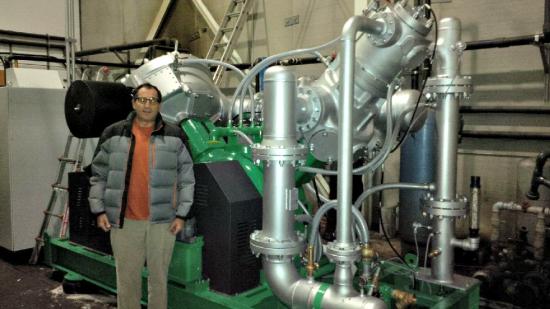 Paul Saltz, VP, PET Power Containers, could not be happier with the new SIAD Vito 1330 installed by Compressors aiR Us, Inc.

“Compressors aiR Us did everything for us. And, honestly, they were outstanding,” Paul Saltz, VP, PET Power Containers, commented. “Whatever they did, they went above and beyond. We did the installation between Christmas and New Year. They told us we’d be up and running January 4, and we could literally switch our machines on by the first of January. Not only did they just do the installation, they came afterwards to monitor and check the machine. They were phenomenal.”

Saltz was also particularly impressed with the new SIAD Vito 1330 air compressor. With the installation finalized, he and his colleagues at PET Power Containers are now ready to ramp up production.

“This machine is capable of running more blow molders, so we can grow,” Saltz said. “At the moment, it’s running just over 60 percent on our current machines. We can comfortably put in a few more blow-molding machines and keep running with the same equipment. It’s much more efficient than the other compressors, so we’re going to save about \$50,000 per year with this machine, versus the old machines.”