Cooling Stations at the Cooling Boxes

At a Midwest window manufacturing plant, the cooling process for the plastic frame pieces, after leaving the extruder, was critical to process productivity and quality. Too much cooling air (or not enough cooling air) would generate scrap and rejected product.

The plants’ 17 extruders and 55 separate blow-offs in these lines had similar cooling stations at the cooling boxes. They consisted of about three hoses at each exit frame angled down to the extruded piece moving past it.  The compressed air flow was controlled by a manual control valve set by an operator. The operator used his experience to control the flow delivered and thereby control the product quality.

Measurement of compressed air flow, at the inlet to each control valve, showed an average flow of 7 scfm per extruder.  The calculation then was the 17 extruders were consuming 119 scfm for 6,176 hours per year of operation at \$.08/kWh.  The calculated energy to produce this flow with the plants’ actual measured operating compressed air system at \$90.17/scfm/yr was \$10,730/year. Before finishing the description of what was implemented, some background is in order.

Turbulent compressed air blasts straight out of the pipe or tube. It not only wastes large amounts of compressed air, but it may also violate OSHA noise and dead-ended pressure requirements. Engineered nozzles and air flow amplification nozzles used in place of open blows can reduce noise levels, lower compressed air use, and most often improve blow-off operation in both productivity and quality.

The choice to be made, to optimize this application, was between the engineered nozzles (or “air jet” flow compressed air) to the process with very little amplification or to use air amplifier nozzles.

An air amplifier requires less compressed ar. Air amplifiers use venturi action to pull in significant amounts of ambient air and mixing it directly into the airstream which amplifies the amount of air available at the point of use. Air amplifiers have amplification ratios up to 25:1. This is what was selected for volume and it did not appear to require high thrust.

Figure 2. Venturi nozzle uses the Coanda effect to amplify compressed air up to 25 times with compressed air ejected through a thin opening on the outside perimeter. Another type ejects compressed air through the nozzle. The air travels at very high velocities creating low pressure along the inner wall of the nozzle surrounding air and is pulled into the stream at a predetermined amplification.

Recently, several venturi amplifier nozzle manufacturers have developed very small nozzles that can flow .1 cfm to 2.2 cfm of compressed air and still retain most of the 25:1 amplification. This will deliver high flow for cooling with solid thrust at the nozzle exit near the extruded frame piece. Accordingly, a test was set up on one of the extruder lines. In this case, the nozzle used at this low flow had a 20:1 air amplification.

For the test, three hoses were set up at the plant with a flow meter measuring 7 scfm for an average of 2.33 scfm per hose with the individual control valves set to the same spot the operator had them set. Three venturi valves were then installed with the valves in the same place. The flow meter read 3.7 scfm total amplified flow (3.7 x 20 = 74 cfm) which was way too high. Maintenance personnel adjusted the valves to reduce the flow to what appeared to be the preferred flow.

With the valves adjusted to create the desired flow, the flow meter then read 0.4 scfm for the total of three hoses being used. This would reduce the individual hose average to 0.13 scfm which is the average used in the compressed air review savings calculations.

The recoverable electric energy from this test was calculated and is generally less than the total cost to produce. This is calculated by the effect of the air reduction on the actual operating profile of the new system. 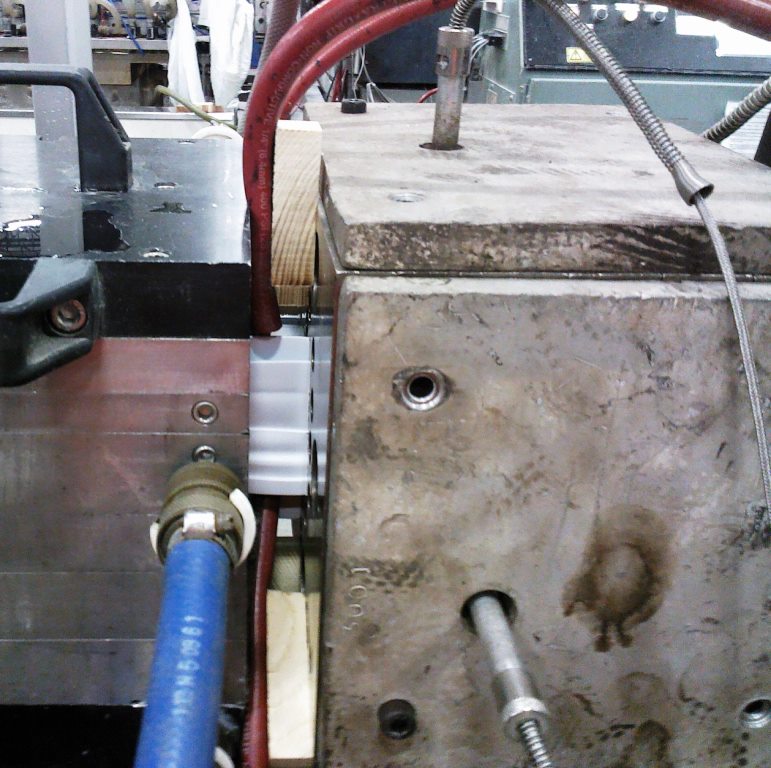 This audit and test was performed more than two years ago. All the lines were changed to the new blow off systems. The lines are monitored as part of a very significant compressed air management system utilizing key performance indicators and the process continues on saving energy every day.

Productivity and quality improved because maintaining the critical flow in the lines with the current system was somewhat difficult due to compressed air system pressure fluctuations affecting the flow. This haD to be corrected by various plant operators with manual controls.

With the selected nozzle the estimated flow is at .13 scfm each which is almost at minimum flow. Since most of the generated air flow (2.4 to 2.5 scfm each) is from amplification, the net flow is affected almost insignificantly by system pressure fluctuation. The end result -- scrap has gone down.

Figure 5. Nozzle used for the test

The most common error in using blow air for cooling is to estimate pressure or thrust needed in the air stream without evaluating the actual cooling air flow required.

Thrust is required to drive the cooling air to the point where it can absorb the heat and carry it away. The amount of heat (btu/hr) removed is a function of temperature differential and, most important, volume of working air flow (cfm).

To review the numbers in this scenario the operator-adjusted cooling air flow that worked well was 7 cfm ÷ 3 = 2.33 cfm per hose. When the air amplifier was installed the flow for all three hoses and new nozzles was .4 cfm, or .13 cfm per hose/nozzle -- .13 compressed air x 20 = 2.6 cfm per hose -- very close to the 2.33 cfm originally set by the operator. The successful production with these nozzles led to a constant, predictable flow at each work station basically unaffected by normal system pressure fluctuation and operator differences. Productivity and quality improved significantly along with a 94% reduction in compressed air use. 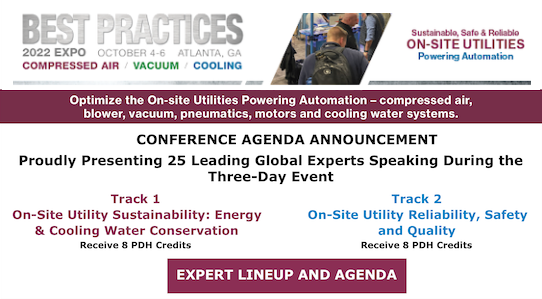