By making changes primarily focused on compressed air uses, Winpak, an international plastics products manufacturer based in Winnipeg, Manitoba, Canada, increased compressed air production capacity and reduced annual energy consumption by 33%. These benefits have been accomplished while the company was making the switch to lubricant-free compressed air to support product quality goals. This article discusses some of these changes and addresses measures that could be implemented in any compressed air system.

Winpak manufactures and distributes high-quality packaging materials and related innovative packaging machines. The company's products are used primarily for the protection of perishable foods, beverages, and in healthcare applications.

Part of a global packaging group, Winpak operates twelve production facilities in Canada, the United States and Mexico, while offering global coverage and expertise. The North American business units assist customers throughout the United States, Canada, Latin America, the Pacific Rim countries and, for certain products, Europe and the Middle East. Winpak has a strategic alliance with Winpak, one of Europe's leading manufacturers of packaging materials.

“Winpak is committed to developing sustainable packaging, achieving energy efficiency through its operations, and investing in R&D to deliver innovations to minimize adverse environmental impacts,” said Masoud Sharafi, P.h.D., P.Eng., CEM, about the company’s lofty goals. Sharafi is the company’s Project Engineer-Energy. “We believe everyone in the organization shares the responsibility to protect the environment and minimize our impact on natural resources. To that end, we are committed to consuming energy in the most efficient, cost-effective and environmentally responsible manner. Our mid-term target is to reduce our energy intensity by 10% by end of 2025.”

The company’s first manufacturing plant was started in Winnipeg, Manitoba, in 1977, but in a different location, it recognized early on sustained growth would require a bigger plant so they moved to their current spacious facility. The facility was serviced by a set of modulating style lubricated screw air compressors and non-cycling refrigerated dryers, with the company adding compressed air capacity, and improving efficiency as the facility was expanded.

Winpak’s high commitment to product quality and food safety recently guided their change to lubricant-free compressed air. When the decision was made to upgrade the compressed air system due to an expansion Winpak’s engineering department contacted the local power utility, Manitoba Hydro. The utility offers technical and financial support for any project that might save electrical and natural gas energy.

For the first step, Winpak had a compressed air auditor capture a baseline of their compressed air system energy consumption. The auditor placed measuring instruments on all the air compressors to capture a power/energy profile, installed pressure loggers to monitor pressure at various points in the plant, and installed flow meters to measure the compressed air demand profile.

The efficiency of Winpak’s original compressed air supply was very good, the company had worked with the power utility for previous expansions in the years before. The baseline system was set up with two base, fixed speed air compressors, and one variable speed-controlled unit, and modern and efficient cycling style refrigerated air dryers. This system had been converted from modulating air compressors in a previous project for significant savings.

An electronically controlled pressure/flow controller limited the pressure in the plant to 100 psi in order to reduce artificial demand. The system of piping within the plant was well-sized and arranged in a loop system to reduce pressure loss. The air compressor heat was directed to the plant to displace natural gas heat. But the company had not had their end uses and leakage assessed for many years, so an end use and leakage audit was also conducted.

A thorough compressed air leak audit was conducted using an ultrasonic leak detector. The facility has a high noise level, so use of ultrasonic equipment is a must. During the audit, 58 significant leaks were found and tagged for later repair. The cost for leakage was estimated at 90 cfm, consuming about \$8,700 in annual compressed air costs per year. This cost paled in comparison to the cost of some inappropriate uses also found during the assessment. 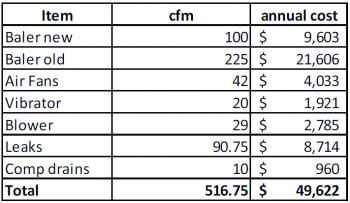 During a leak audit a number of potentially inappropriate end uses were found.

One of the side benefits of using an ultrasonic detector in a plant is that end uses of compressed air are also detected during the same facility survey. Having an experienced auditor do the study means end uses can be assessed for appropriateness. An inappropriate use of compressed air is defined as an operation that could be better supplied by another energy source or could be reduced or eliminated altogether.

Some potentially inappropriate uses found and flagged during the Winpak audit were:

After discussion with plant personnel, not all these findings were identified for future investigation. For example, the compressed air agitation of the ink drums had already been identified for a project and addressed. The solvent-based ink is very flammable; therefore, compressed air agitators are appropriate in this case, however, it was found by research that the agitators did not need to run continually to keep the ink color consistent. A control system was installed on each motor that ran the air motors for each barrel one at a time in sequence for 15-minute intervals throughout the day. This greatly reduced the estimated 70 cfm continuous compressed air demand down to less than 10 cfm. 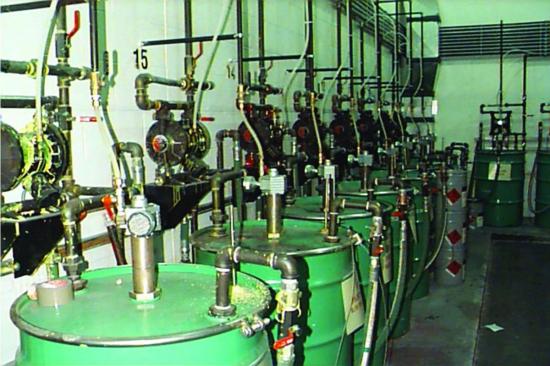 Ink agitator air motors were controlled so they operate one at a time in sequence over the course of the day, greatly reducing compressed air usage.

Rather than installing heatless desiccant air dryers, which would have consumed a constant 150 cfm of purge flow for each air compressor to produce instrument air, Winpak chose to purchase heat-of-compression dryers. To save space, drum style dryers that are integrated into the air compressor enclosure were used. The air compressors installed were each 200 hp (160 kW) in size, one being a variable frequency-controlled unit for efficient control.

The old air compressors were configured as spares and shut down for normal use. Since there were two separate compressor rooms a significant distance apart, a central air compressor controller was installed that communicated to all the air compressors in both rooms to ensure the plant had a constant pressure in both sides of the plant.

Since the original compressed air production system was quite efficient, it would have been challenging to find additional improvements on the supply side of the system. The key to this successful project was attacking problems on the demand side. The following things were done: 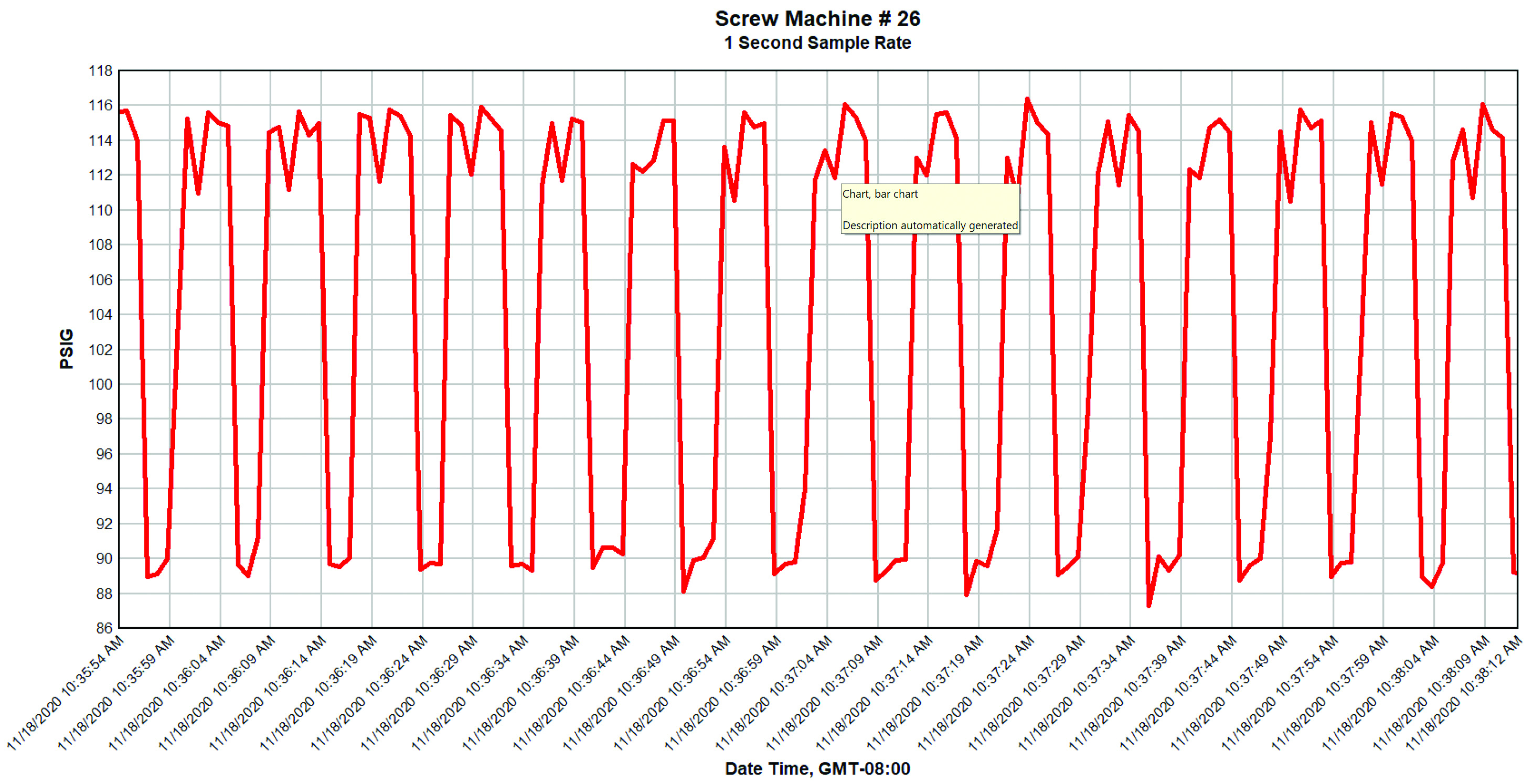 Some portable air fans were replaced with explosion-proof electric fans. 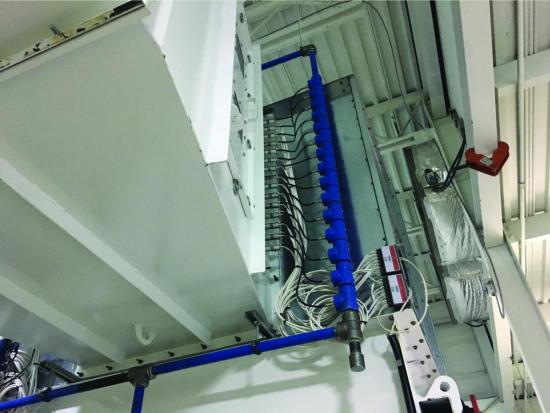 A scrap collector duct was fitted with compressed air powered ionizer nozzles to prevent clogs due to static causing the plastic to stick to duct walls. This unit consumed 100 cfm of compressed air using an equivalent of 20 kW. 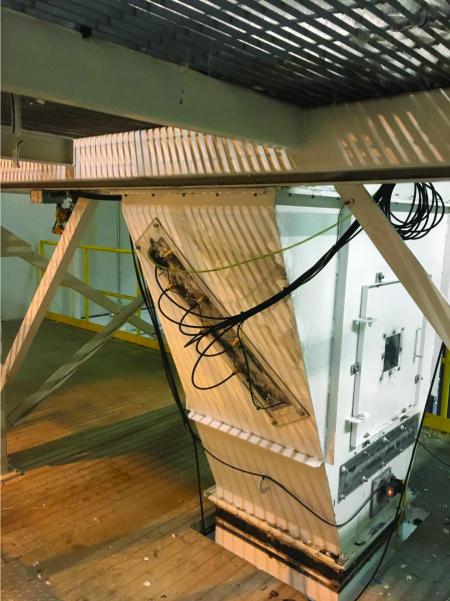 Scrap collector system ionizers were changed to a different style since they use only a small amount of compressed air.

Winpak’s compressed air system was already quite efficient on the production side so end use and waste reduction strategies needed to be found to reduce compressed air energy consumption.

Baseline energy for the original system was set at about 2,500,000 kWh per year costing about \$167,000 per year. With the improvements the compressed air energy consumption dropped to about 1,640,000 kWh per year, resulting in an energy savings of 33%. Since the reduction in airflow achieved represents about one whole 200-hp air compressor, plans for installing additional lubricant-free capacity were deferred.

The project qualified for a substantial energy improvement incentive from the power utility. It should be noted that fairly inexpensive improvement measures on the demand side helped fund more expensive measures on the supply side, a common benefit of addressing the whole system and combining the project into one.

This project shows the benefits of having a compressed air assessment done in a plant and having an energy manager to help champion projects. Since the original compressed air system supply side was already quite efficient, looking to the demand side was key. In addition to leakage, some inappropriate end uses were found that saved far more than what would result from leakage repair.

In the end Winpak achieved the change to high-quality compressed air, but also gained much lower electrical cost, an excellent result that is something to brag about.

“Before the compressed air project, three high-pressure air compressors were operating continuously in order to keep up with the demand,” he said. “The project allowed us to save electricity as well as some maintenance cost as we only need to run two air compressors instead of three. We acknowledge the support we received from MB Hydro including financial rebates which assists the business case of the project. Moreover, the technical advices received by the Hydro team helped us to identify and implement more improvement opportunities through this project.”

Recently Winpak identified this compressed air project as one of the highlights of their experience with Manitoba Hydro’s Energy Manager program.

“This project is a great example of showing how energy/sustainability initiatives can be in line with business goals and to protect the environment at same time. Definitely, we will keep monitoring compressed air, including its demand and supply side and looking for any opportunity to improve it,” Sharafi said.