This commercial printing facility is located in the Northeastern part of the U.S.  Like most facilities, the plant has seen many changes over the years.  The printing press technology, at the facility, has changed over the years as ink and press technology evolves.  Two compressor rooms supply compressed air to multiple print production buildings.  The system assessment has found opportunities to save energy in both the supply-side and the demand-side of the compressed air system.

Supply Side: The Two Compressor Rooms

The East side of the plant is served by a compressed air supply in the compressor room in Building B. Building B serves the major print production area with presses, baggers, etc.  These are modern rotary screw air compressor units – a 200 horsepower (hp) unit (modulating-control), a 250 hp unit (spiral-valve), and another 200 hp unit (turn-valve). Normally, the East Room runs the 200 hp modulating-control air compressor at base load and trims with the 200 hp turn-valve (variable displacement) unit or with the 250 hp spiral-valve (variable displacement) unit.  There is an older non-cycling, refrigerated compressed air dryer rated to handle 1,500 scfm at 100 psig at 100°F inlet air.

Building A has three 150 hp rotary screw air compressors built in the 1980’s.  These units are significantly less power efficient, by their technological profile, than the newer units in Building B (9-12% less power efficient). The West Room, or Building A, runs only one of the three older 150 hp units at a time. Each compressor is rated to deliver 715 acfm @ 100 psig.  There is a refrigerated dryer in the system rated for 750 scfm @ 100 psig @ 100°F. Condensate from the units is handled and collected and then sent to the sanitary sewer, apparently in full compliance with local and federal regulations.

The two systems are separated by a by-pass valve.  This valve is normally kept closed and each system runs independently of the other. The East side runs at 90-92 psig system pressure, while the much smaller West side runs at 90-107 psig. All of the running units are water-cooled except for the air-cooled 200 hp turn-valve air compressor.  Cooling air is directed to and from this unit with no apparent restrictions.

There is a low pressure (60 psig) single-stage rotary screw compressor (200 hp), which comes with the new printing presses and is apparently very well applied in lieu of using high pressure air for ink drying.  This is a similar setup to what we noted at another printing plant, which has both 150 and 200 hp units. 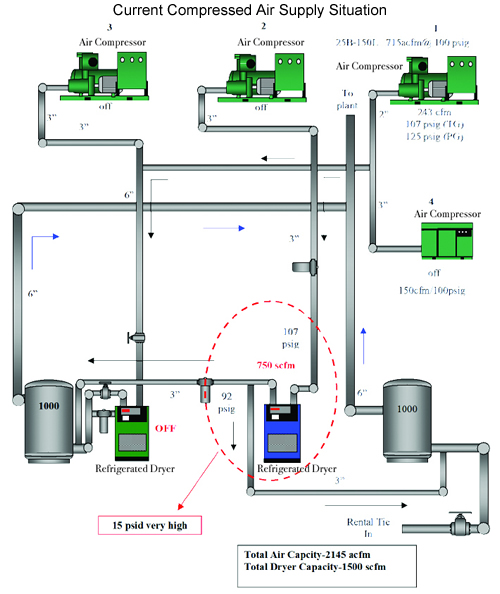 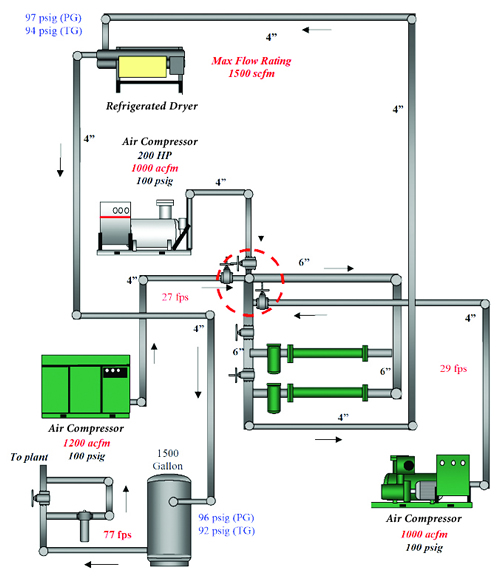 The following actions were taken to establish the baseline for flow and pressure.

Temperature readings were taken on all units with an infrared surface pyrometer.  These were observed and recorded to relate to the unit’s performance, load conditions and integrity.  Critical pressures including inlet and discharge were measured with Ashcroft digital calibrated vacuum and pressure test gauges with an extremely high degree of repeatability.

All air compressor units had the input kW measured with a Fluke motor analyzer and the running units recorded with an MDL multi-line data logger.  Flow was measured from each compressor by comparing the type of control and the type of compressor.  This relationship between power (kW) and flow at certain pressure (100 psig) was plotted on the basic lubricant-cooled rotary screw (with DOE AirMaster) performance curves. The same basic measurement and logging activity was carried out for system pressure using an Ashcroft pressure transducer and the same multi-channel MDL data logger.

Supply Side: Combine the Systems

The project recommendation is to reconfigure piping and the dryer in the East Room to allow all three air compressor units to load in fully, collectively or in any combination.   The project will combine the East and West systems and shut off the older, less efficient units in Building A.  The printing facility will now run all production from the East Room and use the West Room as backup.

The three older air compressors in the West Room are 20 to 25 years old and are inherently less power efficient than the newer units in the East Room (9% to 12% less power efficient).  They also have a less effective modulation throttled inlet-valve capacity control systems – some 60-70% at lower loads.  According to plant personnel, one of these units is a little “shaky”, but the other two run solidly.

The units in the East Room are single-stage, lubricant-cooled rotary screws and are relatively power efficient compared to comparable new units.  Two of them share a very effective “variable displacement” capacity control (the 250 hp spiral-valve and the 200 hp turn-valve), either of which are well applied as a trim unit around 50% load or more.  The 200 hp modulation-control air compressor is relatively power efficient at full load (5.95 acfm/kW) and is in fact your most power efficient unit at full load.  It is perfectly applied at base-load by very knowledgeable plant operating personnel.

The discharge and interconnecting piping is relatively small (4”) with all three units tied together, creating very high turbulence.  The back pressure generated by this configuration precludes running two units at full load at acceptable net delivered system pressures, much less three units.  The new piping project will address this issue.

The dryer and filter are marginally rated to handle two units and way too small for three compressors. The project recommends putting the existing dryers into backup and installing one large cycling dryer which will save an additional \$6,598 per year.

The West room, as it is currently operating, is 39% less power efficient than the East Room
Combining the two production areas to run primarily off the reconfigured East Room will increase the overall efficiency by 53%.  Combining the two systems will reduce the annual electrical energy cost to produce compressed air, at pre-project demand levels, by \$51,942 per year. 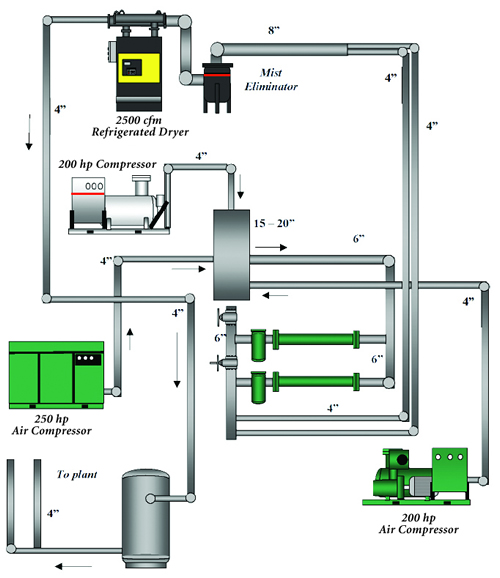 A partial survey of compressed air leaks was conducted at the plant and 23 leaks were identified, quantified, tagged, logged, and repaired. These were identified and tagged during full production. Savings totaled 70 cfm for the 23 leaks that were identified. The savings estimates associated with a leak management program are based on the unloading controls of the compressors being able to effectively translate less air-flow into lower cost.

We recommend an ultrasonic leak locator be used to further identify and quantify the compressed air leaks.  We use either a Superior Signal VXP AccuTrak or a UE Systems Ultraprobe 2000.  With a few minor exceptions, most of the leaks could not have been found without the use of an ultrasonic leak detector and a trained operator.  Leak locating during production time with the proper equipment is very effective and often shows leaks that are not there when idle.

However, a regular program of inspecting the systems in “off hours” with “air powered up” is also a good idea.  In a system such as this one, some 90 to 95% of the total leaks will be in the use of the machinery, not in the distribution system.

The area surveyed in the leak study included a great deal of high background ultrasound noise that shield many of the smaller leaks.  In continuing the leak management program, plant staff should perform leak detection during non-production hours in order to eliminate some of the high ultrasonic background noise. 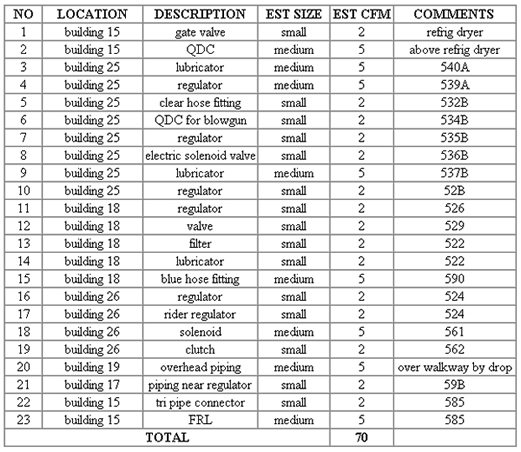 Demand Side: Printing Presses Switched Away from Water-based Ink

In Building F, there are four large printing presses using sixteen 1” air-operated, double-diaphragm pumps.  These run continuously, feeding the ink supply to the press.  These pumps are currently running at about 120-150 cycles per minute with an estimated 60 to 65 psig inlet pressure.

The presses no longer use this water-based ink and therefore, can be switched back to the electric motor-driven ink pump.

There are many air cylinders in use throughout the operation.  There are eight 3” cylinders with about a 1” stroke running in Building F on Bag Machines 538 A&B.  These run continuously during production.

Bag Machines 538 A&B each have four 3” cylinders (3/4” rod) with 1” stroke running the cutter.  These cylinders appear to run a 70 psig inlet pressure from a well-applied regulator.

Installing the X-Block return air recovery system will capture and re-use the return air on a continuing basis.  This also eliminates the need for any “cushion air” and may improve cycle time, if needed

The project has installed the X-Block air cylinder return air recovery system on the eight 3” main cutter cylinders on Bach Machines 538 A&B in Building F.  This will continually recover and re-use the return stroke exhaust air, thus reducing the demand by 50%.  This also eliminates any need for separate cushion air and may increase cycle time, if appropriate.

Supply-side and demand-side adjustments have improved the energy efficiency of this system.  The printing facility has reduced demand for compressed air by eliminating inappropriate uses and artificial demand.  The generation of compressed air was optimized by supplying the whole facility from the newer, more efficient, air compressors in Building B.  The air treatment system was improved with a new cycling air dryer and a low pressure-drop mist eliminator. The older equipment is saved as back-up air compressors and refrigerated dryers.  Total energy savings are 1.8 million kWh worth \$121,000 per year.  The simple ROI on the project is 8 months.