The Trinity Mirror Group print works on Oldham is one of the UK’s largest newspaper printers. The nine presses in the facility produce around 1million papers every day, including the Independent, the Daily Mirror and a range of local, regional and sports titles. Printing on this scale does not come cheap in energy terms, however. The plant’s annual electricity bill is in the order of £1.5millon. With energy prices on the rise, and a strong desire to improve environmental performance and reduce its carbon footprint, the plant’s management has recently embarked on a project to cut energy use substantially. 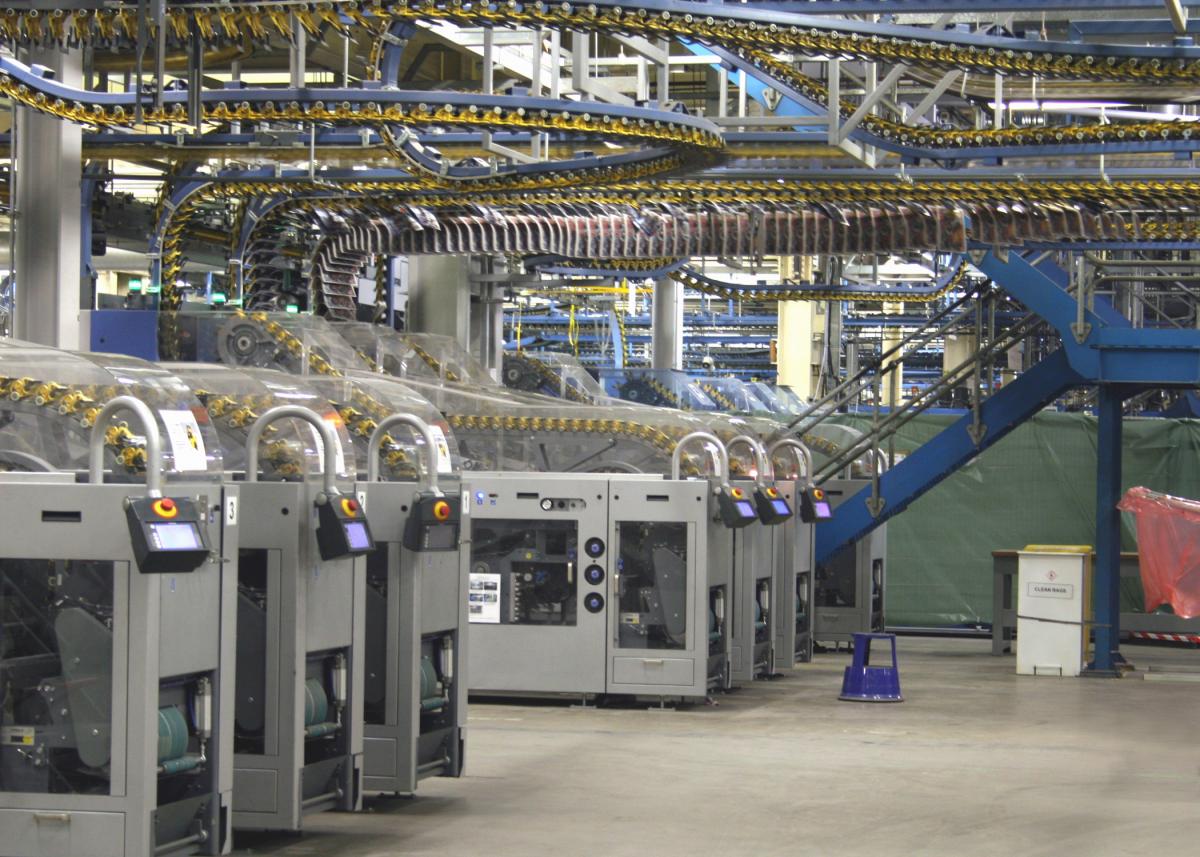 Kieran Flemming is commercial manager at the Trinity Mirror plant. He is responsible for equipment and facilities and has spearheaded the energy saving campaign over the past 12 months. “Our first step was to introduce a sub metering system so we could see exactly what equipment was accounting for the bulk of our energy costs,” he recalls. “Examining the data collected with the new meters made one fact immediately clear – nearly one third of the electricity used at the site was consumed by its compressed air plant. This put to rest a common misconception that the process itself accounted for the bulk of energy costs where in actual fact it accounted for approximately 23%.”

Independent energy consultant David Jeffs of Energy Matters, who was working with Kieran on the energy saving project, recommended that he call in compressed air specialists Maziak to review the installation and see if there was opportunity for savings to be made.

The compressor installation providing this air was relatively recent, having been installed in 2004, and included some relatively sophisticated control. One of the four compressors was driven by a 180kW variable speed drive (VSD), allowing it to better match energy consumption to demand.

The other three compressors were fixed speed 160kW units. Unfortunately, the installed configuration of the units was not making the most efficient use of their capabilities. The standard control configuration meant that the variable speed compressor was always the lead unit. During times of low demand, this compressor could adjust its flow rate and energy consumption effectively, but as demand rose and the other compressors were switched on, control effectiveness was substantially reduced.

Maziak’s recommendation was the replacement of the existing OEM compressor control unit with a Metacentre intelligent control system from Energair. The Metacentre system constantly monitors pressure and demand in the system and, using software that ‘learns’ from previous events, makes decisions about the optimum combination of compressors to use in order to maximize overall system efficiency. By dynamically changing the lead compressor in the Trinity Mirror installation, the Metacentre control can ensure that the VSD unit is always able to fine tune air production to meet current demand, while minimising the number of costly on-off events undertaken by the other compressors in the suite.

Working with Maziak, Kieran and his team made a number of other changes to the plant’s compressed air installation. “This is a large plant, and some of the compressed air travels more than 600m from the compressor house to its point of use,” explains Kieran. “This causes a substantial pressure drop, meaning we had to supply compressed air to the plant at 9 bar in order to be sure of delivering a consistent 7 bar regardless of demand.”

By adding an intelligent flow control valve to the facility’s existing compressed air accumulator system, the team has been able to reduce delivery pressure to 7.2 bar. During times of peak demand, air is released from the accumulators to maintain system pressure without needing to request additional compressor capacity.

“As the compressors are optimised to supply 9 bar, they continuously supply the accumulator system at this pressure but the flow control valve gives us the ability to maintain a consistent 7.2 bar to the production facility. The energy savings from this system are substantial and a secondary benefit is that we have reduced our compressor utilisation by 50%. This effectively gives us two standby compressors at all times and has also led to significantly reduced maintenance costs.”

Since the installation of the Energair system, the effect on Trinity Mirror’s energy consumption has been dramatic. Measurements taken at the site before and after the nstallation show that the electricity consumed by the compressed air installation has dropped by 46%, translating into a saving of more than £115,000 per annum.

The site has recently won ISO14001 accreditation for its environmental and energy saving activities and special mention was made in the auditor’s report on the sustained energy savings. “The new installation has exceeded all our expectations in terms of energy savings,” says Kieran. “We originally anticipated a payback period for our investment of 15 months. In fact it has paid for itself in less than six and has also delivered significantly reduced maintenance costs. Our electricity prices rose quite substantially at the beginning of this year, but thanks to this work, our bills have stayed pretty much the same.”

The smooth operation of the new system results in fewer big electrical events as large compressors switch on and off, it is also good for the plant’s power quality as measured by the site’s power factor. “We were getting to the point where we needed to consider installing costly power factor correction equipment to reduce our effect on the national grid and avoid expensive distribution charges” notes Kieran, “The new installation has dramatically improved our power factor and taken us out of the problem zone for power quality and eliminates the need to carry out power factor correction.”

Together with other changes, including the installation of better heating controls, low energy lighting and variable speed drives on various electric machines, Kieran and his team have successfully cut overall energy use at the site by more than 15% in the last year. “We are well ahead of our corporate targets for efficiency improvement and we are reaping the benefit of larger than expected savings in energy costs, so we are delighted with the progress of the project so far,” concludes Kieran.

Anyone interested in how much energy can be saved on a given site, (with any combination of compressors and duty cycles), by a new Metacentre system can find out instantly by using EnergAir’s online calculator at www.energair.com. The calculator will also allow users to print-off a detailed and accurate report.