Boeing Canada Winnipeg (BCW) has been recognized with the best improvement project of 2013 within the Boeing enterprise worldwide. A cross-functional project team including BCW staff, Manitoba Hydro technical support, and design engineers from Alliance Engineering Services, Inc. used innovative high-pressure storage to reduce the required size of their air compressors and save substantial utility energy and demand charges.

BCW is one of the largest aerospace composite manufacturers in Canada. The plant produces nearly 1,000 end-item composite parts and assemblies for Boeing Commercial Airplanes, specifically for the 737, 747, 767, 777 and 787 airplane models.

Before the Winnipeg site’s recent expansion, a Manitoba Hydro compressed air audit found the site’s compressed air system to be inefficient. The system produced compressed air using centrifugal compressors which are excellent base load machines, however, when applied to the flow of the BCW site, proved to be incompatible to the load profile.

When composite parts are manufactured, they must be baked in large pressure vessels called autoclaves. The autoclaves, which are large enough to contain a city bus, must be pressurized with compressed air for this operation. This fill is governed by a recipe which requires the vessel to fill to a required pressure within a certain time. The old system was originally designed to provide 4,500 cfm for autoclave fill operations, but due to reliability issues with the centrifugal compressors, only two of three machines were normally available; reducing the available capacity to 3,000 cfm. Two larger autoclaves purchased in the last five years then raised the required optimal fill rate to 5,500 cfm.

The fills cause BCW’s compressed air flow profile to have high peaks, but low valleys during normal production. The peaks occurred less than 10 percent of the time when two large centrifugals would run fully loaded. The rest of the time the centrifugals would reduce their load and go into blow-off mode, an inefficient way to run compressors. While feeding an average load of about 700 cfm, two large 350 HP compressors ran at 85percent of their full load power. System specific power, a measure of how much power is consumed while producing a given amount of compressed air, was measured to be about 65 kW per 100 cfm. The new production level would require the third centrifugal to be used and a fourth unit to be purchased.

BCW staff tried to turn off one of the units between fill cycles, but still received poor results. The style of centrifugals used at BCW were hard to start. While trying to implement shutdown strategies, the compressors suffered a series of major motor failures. For maximum reliability the units had to remain in modulating mode using blow-off, the least efficient way to run these units.

The opportunity to completely redesign the way the compressed air was being produced came with the pending site expansion. BCW staff started working on the problem and came up with an innovative solutions patterned after a previous project done on their nitrogen system www.airbestpractices.com/system-assessments/air-treatment/n2/nitrogen-system-innovation-boeing). The air compressors and dryers would be relocated to a different area of the plant and a different style of compressors would be used.

The new system uses four rotary screw compressors and two booster compressors to provide enough plant air to cover normal production activities and the new higher autoclave fills. Instead of providing the high fill rate with running compressors, the necessary air is stored at pressures of up to 280 psi in two large 25,000 USG receivers located outside the compressor room. This air is added to storage slowly using a 50 HP high pressure booster compressor and an associated 100 HP 125 psi rated base units. When it’s time to fill an autoclave, up to 5,500 cfm of air, the equivalent of 1,375 HP of air compressor capacity, flows from storage. The booster compressor operation is controlled with a Manitoba Hydro designed demand management system that watches the main facility power peak and turns off the boosters if they would add to peak demand charges on the power bill. This system reduces the cost of the stored air by about 25 percent.

The main compressed air system is designed with 100 percent redundancy; that is so half of the compressors can be removed from service with no effect on production capacity. Two 225 HP VSD style screw compressors were installed with two 100 HP base compressors providing inlet air to two 50 HP high pressure boosters. Two cycling air dryers with dual parallel mist eliminator style filters efficiently condition the main plant air. Stored air is dried to -40 C dew point with an air dryer for outdoor storage, even in the winter. Compressor room piping is sized for the complete capacity of all compressor, resulting in minimal piping pressure losses across the complete system.

All compressors are controlled, within a narrow pressure band, by a sophisticated sequencing control system and the accurate regulation of the VSD compressors. The system is designed so that usually only one of the four main compressors are running, with the other active for fill duty. If an autoclave fill exceeds the capacity of the two active compressors, a special fill valve adds stored air into the system to maintain stable plant pressures. Additional control valves at each autoclave automatically limit the flow of air into the vessels if the operation causes plant pressure to drop to unacceptable levels. 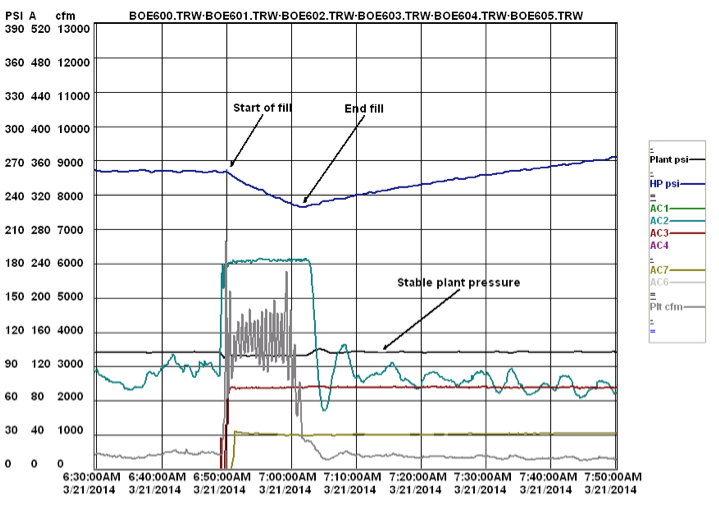 BCW staff also worked on their leakage and inappropriate end use levels while the new compressed air equipment was being installed. As a result of their efforts the average air flow decreased from the 750 cfm level down to about 425 cfm, saving even more. “The centrifugal compressors provided an adequate flow of very clean source of compressed air but were very expensive to operate both from an energy and maintenance perspective,” says Gerry Glor, engineering specialist at BCW. “The oil flooded screw compressors in combination with booster compressors and 50,000 US gallons of high storage allows much greater flexibility in operating the autoclaves, and the system is much less maintenance and energy intensive.”