Power Supply Industries Helps Alton & Southern Get Back on Track


Alton & Southern Railway is a classification yard. A classification yard is a railway yard found at some freight train stations, used to separate railway cars onto one of several tracks. Hump yards are the largest and most effective classification yards, often sorting several thousand cars a day. The heart of these yards is the “hump”—a lead track on a small hill where an engine pushes the cars over. Single cars, or a block of coupled cars, are uncoupled just before or at the crest of the hump, and roll by gravity onto their destination tracks in the tracks where the cars are sorted, called the “fan.”

The speed of the cars rolling down from the hump into the fan area must be regulated based on various factors. Information such as whether the cars are full or empty, heavy or light freight, and varying number of axles determines individual speed conditions. It is also important to know the number of cars already on the classification tracks, and varying weather conditions, including temperature, wind speed and direction. 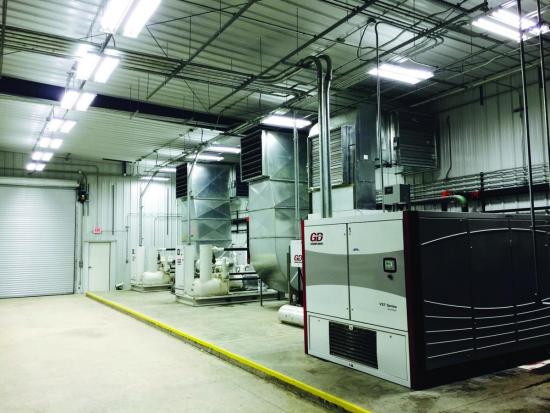 Concerning speed regulation, this work is done by mechanized "rail brakes," called retarders. Their job is to brake the cars by gripping the wheels. They are operated either pneumatically or hydraulically, with Alton & Southern Railway’s system using the former. Considering much of Alton & Southern Railway’s compressed air piping system dated back to its 1960’s installation date, there were leaks. As of 2012, it was determined one and a half compressors were running at 100% capacity just to maintain leaks. This equated to about 1,500 cfm at a cost of roughly \$180,000 in electricity annually. 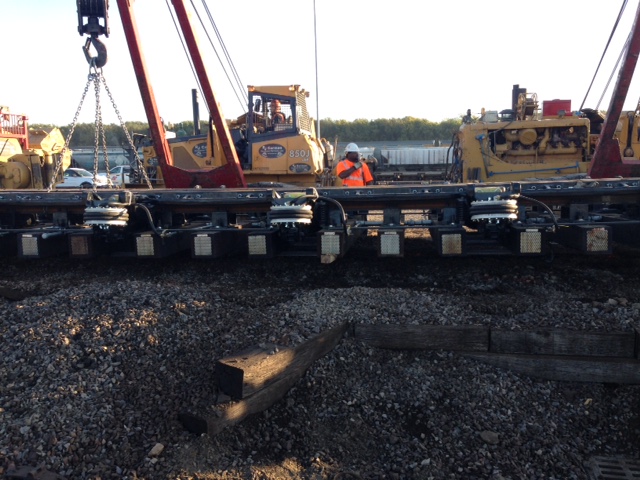 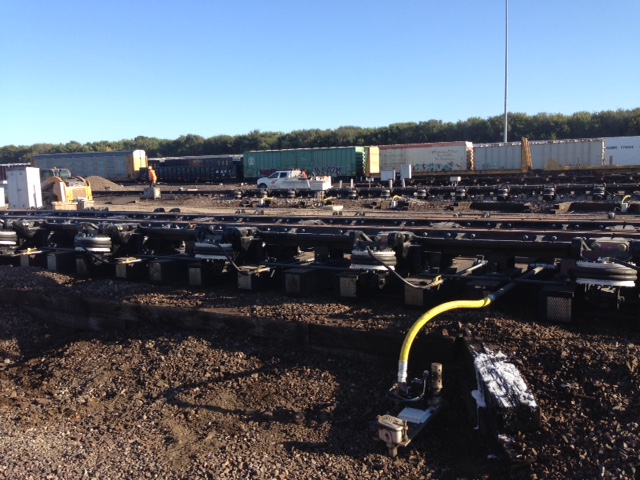 The new compressed air piping system being cutover to the retarders at Alton & Southern Railway.

Alton & Southern Railway’s journey towards optimizing the compressed air system took roughly 10 years, beginning back in 2004 when the low air alarm began firing consistently. Their equipment at the time consisted of three 250-horsepower, 1100 cfm compressors, running full load with the low air alarm still persisting. This is when they brought in Jim Timmersman, the lead compressed air auditor from Power Supply Industries, to troubleshoot the system. Timmersman worked with Alton & Southern Railway’s budgeting constraints over the years implementing changes along the way. Timmersman focused on their compressed air dryers, flow controllers, piping, storage, and finally their air compressors.

A major factor for the infrastructure’s inefficiency was the introduction of compressed air dryers had not taken place for several years during the rail yard’s operation. Much of the compressed air piping developed major erosion issues due to improper dew point conditions. Heatless dryers were eventually installed, though poorly maintained. This caused a 15 psi pressure drop and continued unstable dew point conditions. They were replaced with heated purge desiccant dryers providing a dewpoint of -40 °F. This merely scraped the surface when it came to tackling the entire project. This all played into the major process of lowering the plant pressure from 140 psi, to the optimum operating point being between 90 – 100 pounds. 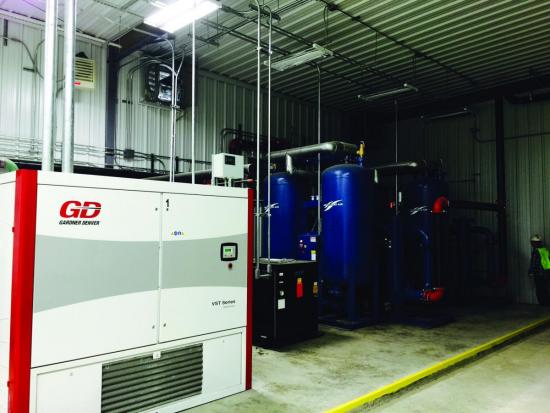 The next project Timmersman brought to the table was the introduction of a compressed air flow controller. Flow controllers adjust to system changes instantaneously. They can allow air compressors to accelerate and catch up to air demand, while maximizing the advantage of the available part load performance. They can also prevent pressure degradation if an operating compressor fails, and may eliminate compressed air related work stoppages and production interruptions.

Ultimately, the plant pressure was reduced from 140 psi to 105 psi, where the air compressor’s output was reduced from 140 psi to 128 psi. This allowed the high-pressure machines to continue operating at a high pressure to build storage, yet allow the plant to work on the lower pressure.  This also effectively reduced the low-air alarm threshold to 88 psi, allowing at least one compressor to shut off most of the time.

By 2007, all three air compressors were back to 100% capacity load, the low air alarm began flashing again and a fourth “portable” compressor was purchased and tied into the system as needed. The piping was merely too old and the leaks far beyond repair. Timmersman noted, “An entirely new piping system was required to fix the problem.” Ameren Missouri was contacted whose utility incentive program, Act On Energy, is designed to help pay for upgrades, if certain energy consumption reductions were met. The rebate amount was \$178,000, if completed in 2007. This was not in Alton & Southern Railway’s budget. By 2012, it was determined one and a half compressors were running just to maintain leaks. With the current demand profile of 3,000 cfm, 1,500 cfm was being wasted due to the issue. Alton & Southern Railway decided it was time to pull the trigger.

The first step was to design the new layout of the piping. The initial header was a gradual reduction from 6 inches, to 4 inches, to 2 inches. This was replaced with a 6-inch header with 4 and 2-inch lines branching off of it for the required application. The implementation of the new header alone would mean a gain of 6,000 gallons just in piping.

Second, was the strategic placement of compressed air storage. A new air building was constructed, housing a 20,000-gallon storage tank; while the old air building still housed 11,000 gallons worth of storage. Secondary storage comprised of two 5,000-gallon tanks. One 5,000-gallon storage unit was planted at the top of the hump yard closest to the master retarders where demand is the greatest. The second 5,000-gallon tank was located in the lower field known as the “fan,” where the rail lines separated into multiple tracks. This is where secondary retarders are located, acting as a failsafe for controlling the car speed if the main retarder were to fail. 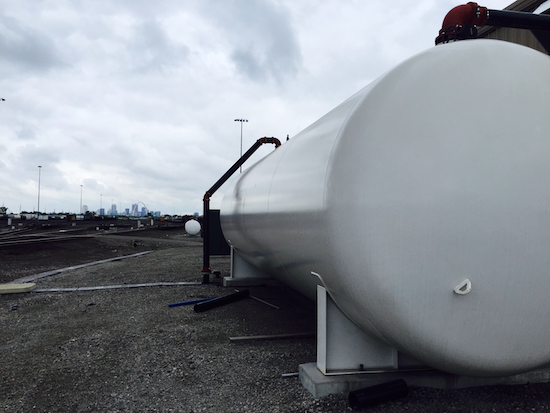 One 5,000-gallon compressed air tank located at the top of the hump yard where demand from the retarders is greatest.

For some systems, it is important to control the rate of compressed air flowing to refill a secondary receiver (the control is called metered recovery). If the rate is not controlled, filling the receiver will become a demand event, potentially causing system problems due to a high rate of flow.

The following formula is typically used to size storage receivers to act as secondary storage:

S = Rate of flow through the needle valve, cfm

A total of 7,000 feet of piping was installed, equating to over a mile’s worth of infrastructure. Many parts of the original piping line were entirely inaccessible due to it being underground. Not only did much of the original line need to be dug up, but also the new line needed to be implemented in such a fashion to allow for better access for routine maintenance. A series of trenches were developed with access points running the entire length of the system, as to diagnose any future complications. With the construction and installation complete, and the old line unearthed and ready to be dismantled, there was minimal delay in cutover to the new system. This was paramount in order to keep the hump yard in operation.

The Gardner Denver VS235 was installed as the new trim air compressor, with two fixed speed 300 horsepower Gardner Denver’s running as the baseline machines, tied together with the sequencer. With storage totaling a whopping 47,000 gallons and leak free piping, the demand profile dropped from 3,000 cfm to 1,200 cfm. 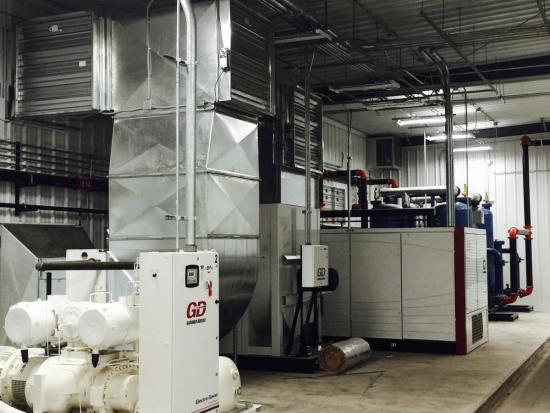 The VSD air compressor handles the intermittent demand, from the retarders, very efficiently.

Timmersman stated, “The VSD was chosen specifically because the retarders can go a half hour with no cars coming down the hill, then spike with the demand event of trains coming with over a 100 cars.” Thus, the VSD reduces artificial demand when little to no compressed air is needed. Variable speed compressors can efficiently and reliably handle the varying air demand found in most plant air systems. These compressors speed up and slow down to match air supply to air demand as it fluctuates. The right variable speed compressor in the right application delivers significant energy savings and a stable, consistent air supply.

With an initial demand profile of 3,000 cfm at 140 psi, where 1,500 cfm was going toward compressed air leaks in the piping underground, they now have an average flow of 1,200 cfm at 105 psi due to the changes to the piping, drying and storage systems. The three original 250-horsepower, 1,100 cfm, fixed-speed air compressors ran continuously and were supplemented by an additional portable 300 hp electric air compressor. They were replaced by two fixed speed 300 hp and one Gardner Denver VS235 air compressor.  The VS235 supplies compressed air, when needed, to the rail yard’s inconsistent demand events.

The benefits are plentiful. By eliminating the wasteful compressed air leaks and reconfiguring the entire system, Alton & Southern Railway saved a total of \$182,748 in annual electricity costs. Ameren Missouri provided a significant utility incentive rebate of  \$234,971, making the ROI on the project attractive.

You don’t need any train-ing to see these benefits.