The Fayetteville Wastewater Treatment Plant (WWTP) in Fayetteville, Tennessee, is an example of a treatment plant that does more than just talk about efforts to achieve water quality and effluent goals – while holding down costs. Instead, it puts words into action. 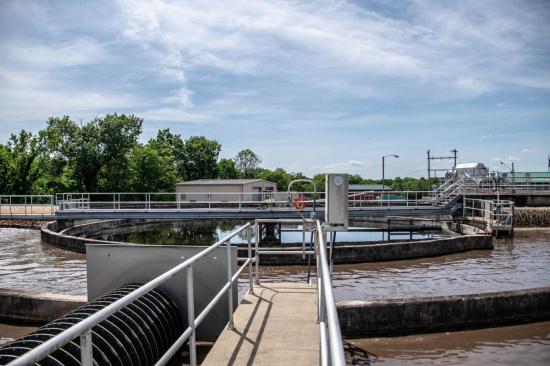 At the Fayetteville WWTP, action has taken the form of a forward-thinking approach to plant operation and multiple initiatives designed to lower the costs of operation and improve efficiencies. Among its initiatives is a \$5 million plant upgrade involving the installation of advanced technology, including:

The plant upgrades, in combination with a progressive management strategy, allows the plant to consume less energy and reduce its reliance on outside contractors for biosolids removal, resulting in total operational savings of approximately \$60,000 per year.  The plant is also positioned to efficiently manage the area’s wastewater for decades to come.

“As a publicly owned wastewater treatment plant our job is to put out quality water in keeping with state and federal regulations, while keeping costs down,” said Fayetteville Public Utilities (FPU) CEO/General Manager Britt Dye. “It’s why we’ve always taken a proactive approach to investing in the future and upgrading our plant. For us, it’s all about moving forward.”

Located approximately 90 miles south of Nashville, Tennessee, Fayetteville is a city of approximately 7,000. FPU manages the plant and the city’s water services.

Since mid-2009 the average daily flow has been approximately 1.5 MGD, but peak daily flows can exceed five to six MGD, requiring the operation of both ditch trains. The plant consistently produces a high quality effluent with BOD5 values averaging 5 to 8 mg/l. and Total Suspended Solids (TSS) values averaging 5-9 mg/l.

FPU and WWTP operators have continuously looked to lower plant operating costs since the plant’s inception. Yet FPU accelerated its cost-savings measures at the plant in 2011 when the EPA (Region 4 – Atlanta) and the Tennessee Department of Environment and Conservation (TDEC) assembled a team to conduct an Energy Management Initiative (EMI). Since then, the plant has never looked back.

The EMI process included an energy assessment, as well as various workshops to help the plant operate more efficiently and cost-effectively. The team included EPA R4, TDEC, the Tennessee Department of Economic and Community Development and the Tennessee Valley Authority (TVA). It also involved the help of the University of Memphis – Civil Engineering Department, University of Tennessee – Municipal Technical Advisory Service, and the University of North Carolina Environment Finance Center.

“FPU is an example of a utility that fully appreciates the value of measuring and controlling energy use at its wastewater treatment plant in addition to implementing ongoing best practices in environmental stewardship,” said Ben Bolton, an energy programs administrator with TDEC. “It is this type of commitment that makes Tennessee an attractive place to live, work, and visit.”

Through the EMI process, the plant identified a number of opportunities to save energy. One such measure included the decision to reduce the run times of the blowers used on its aerobic digesters. Doing so allowed the plant to save considerable energy costs. Two years later, the plant took yet another major step toward energy reduction by only operating one of its two oxidation ditch trains during normal conditions.

Yet FPU continued to see more opportunity for cost savings. As such, it took advantage of financing through a state revolving fund and moved forward with a \$5 million plant upgrade project to further enhance plant efficiencies. The project would also allow the plant to comply with more stringent EPA effluent discharge limits.

The oxidation ditches incorporate a concentric loop design, which consists of an inner and outer ring with dedicated zones for specific treatment processes. The process also includes the use of secondary clarifiers to separate activated sludge biosolids from the mixed liquor.

The ditches use mechanical surface aerators to maintain 1.0 to 3.0 mg/L of dissolved oxygen in the mixed liquor at the effluent end of the outer ring, just prior to entering the inner ring. In all, the ditches use eight electric-driven surface aerators, including four 25-horsepower (hp) units and four 50-hp units.

To save energy, the plant installed LDO probes in the oxidation ditches to monitor Dissolved Oxygen (DO) levels and communicate data to the plant’s new SCADA system. Additionally, it added VFDs to the surface aerators. Today, the plant no longer runs all of its surface aerators at all times. Instead, the SCADA system automatically starts and stops the appropriate number of units needed based on the established DO setpoints. 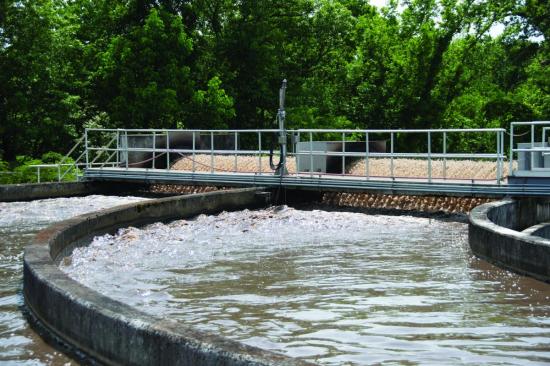 “The LDO probes and the use of VFDs on the surface aerators made total sense,” said Fayetteville WWTP Supervisor Dwight Jeans. “Now, we’re not running them wide open and over-aerating. Instead, our surface aerators only use the specific amount of energy needed to maintain the DO levels, which results in substantial energy savings.”

In addition to its aeration basins, FPU chose to optimize the plant’s aerobic digester operation to drive down energy costs even further, even though it got a good head start on digester energy reduction in 2011 as part of the EMI process.

At the plant, Waste Activated Sludge (WAS) from the clarifiers flows into two aerobic digesters, each of which is rated to process 296,000 gallons of sludge. Each tank is equipped with coarse bubble air diffusers to aid in the aeration process.

The EPA and TDEC-led EMI process determined the plant had been over-aerating its digester tanks. FPU subsequently chose to reduce the blower run times, allowing it to save energy while also providing the proper level of aeration needed. 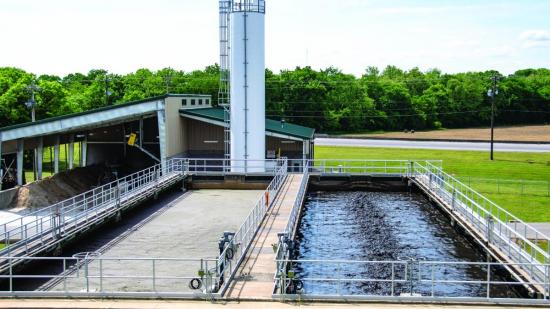 Shown is one of two aerobic digesters used at the Fayetteville WWTP.

When planning the upgrade, FPU determined it could realize more cost-savings with updated aeration blowers used to provide oxygen needed to metabolize the organic compounds in the sludge, while also meeting BOD5 levels. As such, it replaced its two 125-hp blowers with three, new 75-hp positive displacement blowers as part of its plant upgrade. Each blower is rated to deliver 1,500 CFM at 6 psig.

During normal load conditions, the plant operates the digesters at 50 to 75 percent capacity. During the 36-hour aeration period, plant operators manually activate a single blower to provide all the aeration needed for both digesters. The aeration strategy calls for operators to activate a second blower during a rare situation when the plant has reached its peak daily flow and both digesters are at full capacity. The third blower provides system redundancy. The primary blower is turned off during non-aeration periods.

“Just one of these new blowers does the same amount of work as the two older blowers combined, yet it uses less horsepower and consumes less energy. Today, we’re not putting more energy into the digester aeration process than needed and we have reliable blowers that allow us to meet our water quality goals,” Jeans said.

Jeans said the plant is proud of its continued progress and the efforts of all involved at the plant and FPU.

“Keeping the plant running efficiently and managing costs is a team effort, which includes everyone here at the plant, as well as people in administration like Dana Pollock who are able to study and glean the information about cost savings that have accumulated for FPU since the deployment of the new technology at the WWTP,” Jeans said. 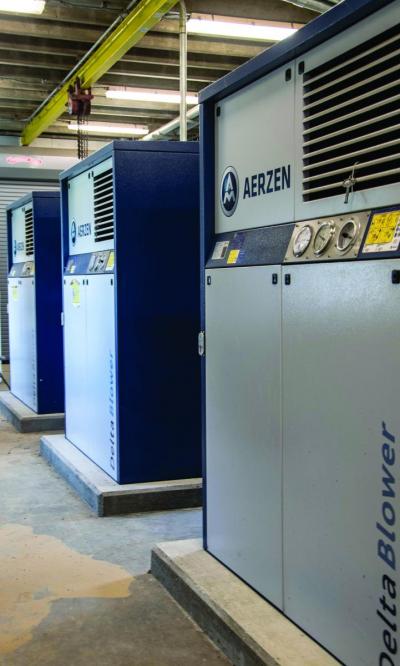 In addition to improving efficiencies through the use of upgraded plant controls, and optimized oxidation ditches and digester tanks, FPU took a new approach to sludge dewatering and removal of biosolids.

Following the aeration process at the plant, digester sludge enters the operation’s dewatering phase. In the past, FPU relied on a local contractor to dewater the sludge and haul away the biosolids. However, as the costs for the service continued to escalate and eventually doubled FPU decided to explore ways to eliminate its reliance on outside contractors for dewatering and biosolids removal.

The centrifuge starts the process by processing wet sludge at a rate of 55 gallons per minute (GPM), which essentially converts the treated sludge to biosolids. The biosolids are then routed to the pug mill, which blends kiln dust with the sludge to stabilize the alkaline level of the materials and to initiate a biochemical heating process. The biosolids are then conveyed to storage area for a 72-hour period, which results in a Class-A biosolids end product.

In total, the plant produces 250 tons of Class-A biosolids per year. The biosolids are available to local farmers and others in the community who can use it as a fertilizer. 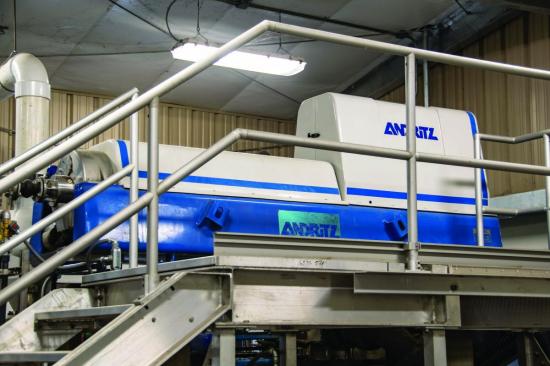 Shown is the high-speed centrifuge used in the dewatering process at the Fayetteville WWTP.

“When the lowest bid for the dewatering contact climbed to \$914 per ton from \$491 we needed to find a more cost effective approach for managing this part of the plant,” Jeans said. “The new dewatering system was the answer, and even though it offsets some of our energy-savings, its saves \$80,000 per year in dewatering costs.”

An Eye Toward Continued Efficiencies

Since completion of the plant upgrade in 2017, the plant saves an estimated \$60,000 in operational costs thanks to advanced, energy-saving technology and FPU’s decision to produce Class-A biosolids for use throughout the community.

According to Dye, the cost-savings measures at the plant are the result of a forward-thinking approach and a commitment to continuous improvement. As an example, he said, the WWTP is developing plans to operate its dewatering process during electric utility off-peak hours to save energy.

“We decided long ago to be a leader in wastewater treatment,” Dye said. “Thanks to the help of the EPA, TDEC and other organizations in the community, as well as our knowledgeable staff, we’ve been able to make substantial improvements that not only save on energy and help us reduce costs, but also enhance the plant’s ability to protect the environment for decades to come.”