What Is Water Hammer?

One major problem that causes severe damage or system failure for any water treatment station is water hammer shock waves. “Water Hammer” or “Hydraulic Shock” is a pressure surge or shockwave resulting when a fluid (usually a liquid but sometimes also a gas) in motion is forced to stop or change direction suddenly (momentum change). The reversed momentum then continues to multiply the further it travels before being stopped. 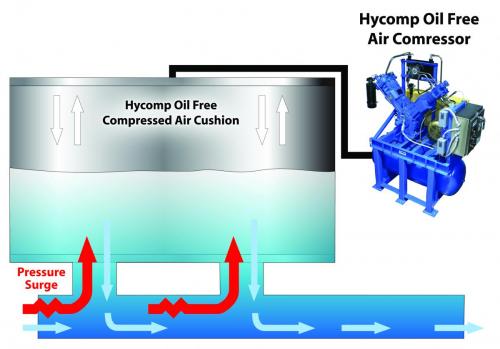 The air cushion provided by a hydropneumatic tank absorbs the shockwaves from water hammer.

This pressure wave can cause major problems, from noise and vibration to pipe collapse and total system failure. If the flow is suddenly closed at the outlet (downstream), the mass of water before the closure is still moving forward with some velocity, building up high-pressure shock waves. When that flow hits the closure it has nowhere to go but backwards towards the source.

In residential plumbing this is experienced as a loud banging resembling a hammering noise, which usually occurs near the home’s internal water source, i.e. the utility closet. Most homes built in the last 20 years in the United States have miniature protection tanks or pulse dampeners similar to hydropneumatic tanks built into industrial water treatment systems.

These residential dampener tanks are usually 4 or 5 gallons in size and unlike their industrial counterparts, there is no compressor providing pressurized air. The residential tanks tend to be located near the water heater tank and buffer the shock of water hammer with an air bladder. The end result of industrial water system protection and home pipe protection is on a different scale, but is virtually the same in theory.

Protecting water treatment plants or pipelines against water hammer is not a new idea and is used in pressurized and non-pressurized systems alike. In non-pressurized systems, air traps or stand pipes (open at the top) are sometimes added as dampers. These methods provide a cushion, to absorb the force of moving water, or a route to divert the surge of water hammer. At some hydroelectric generating stations what appears to be a water tower is actually one of these devices, known as a surge drum.

In pressurized water systems a very effective protection against water hammer damage is the use of hydropneumatic tanks. Similar to a surge protector for electronic devices, a hydropneumatic tank is designed for water storage and provides a pressurized air cushion needed to absorb or dampen the surge before it reaches the water treatment system.

The density of water is 800 times greater than that of air. As a result, air is compressible, while water is not. A hydropneumatic tank utilizes the vastly different densities of water and air, by applying compressed air to cushion water stored in the surge tank. Air pressure in the tank will vary as the volume of water rises and falls, based on system demand.

Sizing hydropneumatic protection systems, including the proper compressor(s) and tank(s) can be difficult. Specifications frequently request a tank that is too small for the system and therefore an underpowered and overworked compressor is also recommended. Using an improperly sized hydropneumatic system is like putting truck breaks on a freight train. It’s not going to work and it could fail in a catastrophic fashion.

When dealing with culinary water systems it is very important to keep the water clean from contamination. Hycomp Inc. manufactures an oil-free air compressor that has proved very successful in providing the clean air cushion needed to buffer hydropneumatic tanks and protect water systems, without introducing contaminates.

Hycomp oil-free air compressors manufactured for hydropneumatic tank protection are built to provide true continuous operation. This means they are built to run 24 hours a day and 7 days a week, which is a standard requirement of compressors being used to protect water systems. The standard capabilities for Hycomp Oil-Free Compressors used for this application are 150 – 575 psig and 5 – 40 scfm.

Hycomp Inc. manufactures compressors that are tailored to their specific use, and as such, they can be configured to any application’s exact needs and conditions. An intuitive and easy to use digital control panel provides precise controller settings and monitoring. Precise settings are always found on screen, such as: oil, inlet and discharge pressures and discharge temperature. Preventative maintenance monitors and trouble alarms ensure system reliability and protect against unexpected downtime using event history screens and troubleshooting guides.

Many Hycomp hydropneumatic tank compressors are in use today. The need for this type of system protection is much more prevalent in the Western United States as there is more variation in the geographic topography. Conversely, surge drums resembling water towers are more widely utilized in the Eastern United States where the landscape is much flatter.

Whether the conditions are at nearly 6,000 ft above sea level in the mountains of Utah and Colorado or the rugged desert climates of Nevada, California and Arizona, Hycomp compressors provide the compressed air cushion required to protect the water system. Hycomp engineers design each compressor to thrive in their environment and run continuously under whatever conditions are required of them. The following case studies illustrate the quality and adaptability of Hycomp engineering.