By Robert Lung for the U.S. Department of Energy Better Plants Program


A replacement strategy for air compressors and blowers integrated into a system-level approach towards energy efficiency can deliver significant energy savings and optimize equipment performance. At the Victor Valley Wastewater Reclamation Authority, a blower replacement project yielded annual energy savings of more than 928,000 kWh and \$98,000 in energy costs, while improving the reliability of its secondary treatment process. In addition, the agency qualified for important incentives from its electric utility — significantly improving the project economics and resulting in a 2.94-year payback. The project also enables VVWRA to more easily meet its energy intensity goal within the context of the agency’s participation in the U.S. DOE’s Better Plants program.

The City of Victorville, California, is located in the Mojave Desert. The local wastewater treatment agency, the Victor Valley Wastewater Reclamation Authority (VVWRA), has an aggressive approach to energy efficiency and water reuse focusing on continuous improvement and optimal performance of plant energy-using applications. In 2015, VVWRA joined the DOE’s Better Plants program at the Challenge level. VVWRA treats wastewater from four nearby member agencies, including: San Bernardino County service Areas 42 (Oro Grande) and 64 (Spring Valley Lake), the City of Hesperia, the Town of Apple Valley, and the City of Victorville.

VVWRA operates one wastewater treatment plant in Victorville and uses an activated sludge process to treat approximately 13 million gallons of sewage per day (MGD). The Victorville plant operates 24 hours a day and was equipped with two 500-hp centrifugal blowers that served the secondary phase of the activated sludge treatment process in which air is supplied to the bacteria that break down organic waste. Most of the blowers were base-loaded to satisfy the normal system demand. Depending on the load, the fans must deliver between 3000 and 8700 standard cubic feet per minute (scfm) at a system pressure of 8 psig, according to VVWRA’s nutrient loading and season.

When the plant was first built, VVWRA began operating with natural gas-fired aeration blowers. Over time, the agency began using some of the biogas it generated to fuel the blowers, but natural gas still accounted for approximately 60 percent of the blowers’ energy consumption. In 2011 VVWRA began experiencing reliability problems and excess venting from their engine-powered aeration blowers. In addition, the agency needed to prepare for an eventual expansion of its wastewater treatment capacity to 18 MGD. After seeing how much air the existing blowers were venting, the cost of natural gas to operate them, and the difficulty of adjusting them to support variable nutrient loads, the VVWRA operations team decided to investigate different blower options. In addition, VVWRA wanted to use all of its biogas to generate electricity for its internal needs.

Staff at VVWRA obtained an energy audit from the University of California San Diego through a grant from the U.S. EPA. The audit found that the existing units would not be able to support the plant’s expansion. Additionally, it found that newer blower technologies could support current and future loads more efficiently. Specifically, high-speed turbo blowers with variable speed control were found to be a good fit for VVWRA’s process. Not only could this type blower offer a high degree of energy efficiency over a wide range of flows, but it also could accomplish the work with a smaller footprint and lower maintenance requirements.

The evaluation’s main recommendation was to replace the existing engine-driven blowers with new, smaller, high-speed turbo blowers controlled by variable frequency drives. The assessment report also included a financial analysis that showed that the high-speed turbo blowers would save VVWRA more money and energy over their estimated 10-year life spans than newer versions of the existing units. This portion of the assessment report was important for justifying the project to senior management. 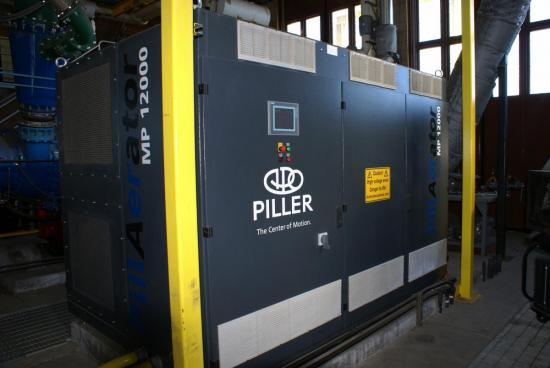 After calculating the aeration needs associated with the expected expansion and new diffuser technology, VVWRA staff determined that the most cost-effective and energy-efficient approach was to install two new, 400-hp blowers. VVWRA decided on two blowers from Piller TSC. The first unit, a PillAerator MP12000 was installed in 2011, and the second one, a PillAerator LP14000, was installed in 2013. The new blowers included sophisticated controls that are able to orchestrate blower operation much more effectively. 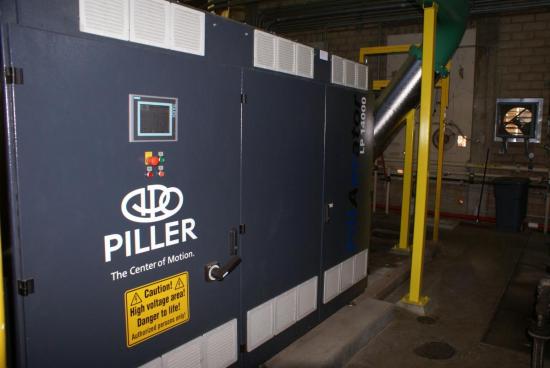 The newest blower was installed in 2013, and provides sophisticated controls.

The replacement of three aging aeration blowers with two smaller, more efficient high-speed turbo units has yielded substantial energy savings and better system performance for VVWRA. The first blower was installed in 2011, and it reduced annual energy consumption and energy costs for the plant’s aeration process by 928,500 kWh and approximately \$98,000. Based on the success of the first blower, VVWRA installed the second one, and the newly configured aeration blower system is expected to consume 1,105,000 million kWh less per year than the previous engine-driven system. These energy savings represent a 40 percent reduction in energy consumption by the treatment process and should result in annual cost savings of \$125,000¹. With incentives through SCE’s Customized Solutions program of \$45,220, and total project costs of \$660,000, the expected simple payback is 2.11 years.

Proper optimization and sizing of aeration blowers can improve system performance and save energy. In the case of VVWRA’s Victorville plant, aging blowers that vented air were wasting energy and did not adjust well to changing loads. This meant that they were not capable of denitrifying the effluent to the required level. In addition, the blowers were not able to serve anticipated plant nutrient limits. In this situation, an electric blower was found to be better able to adjust to variable nutrient loads, which provided better control of the aeration system and better denitrification. In addition, VVWRA wanted all of its biogas to go towards electric power production. Once the plant installed the two smaller, high-efficiency blowers, it achieved significant energy savings and improved aeration performance. According to Gilbert Perez, Chief Engineer at VVWRA: “We have been extremely pleased with the new Piller Blowers. They have delivered the performance we need, and our energy savings have been greater than expected.”

¹ The fuel consumption by the existing blowers has been converted to kWh using a conversion factor of 3412 BTU/kWh.