Many astute air compressor users have noticed the Compressed Air and Gas Institute (CAGI) air compressor data sheets, dated after June 2020, have a new term listed; isentropic efficiency. Isentropic Efficiency will be the new standard of reference for a true comparison of the overall efficiency of air compressors at any rated discharge pressure. Now users can see which company produces the most efficient product with an easy reference percentage number. The compressed air industry, in conjunction with CAGI, has been trying to make fair comparisons between air compressors for years. Let us go back in history and review this historical progression before we get into explaining isentropic efficiency (IE) in detail.

Comprehensive standards for testing the performance of air compressors did not exist in the industry until the early 1990s, when ISO 1217 was the first commonly standard test method implemented. Until that time, air compressor manufacturers tested their machines in slightly different ways. For example, there was no standard for inlet temperature or humidity - which can make a big impact on performance. Some air compressor manufacturers were only measuring the performance of the bare air end, with none of the losses for the inlet valve, coolers, separators, and coolers. This might mean one manufacturer to another could have a package power performance difference of 5% or more.

During this period of history, some air compressor manufacturers did not even publish rated capacity on their brochures. Subsequent audits of the 1970 – 1980 machines have proven they averaged about 425 CFM per 100HP. The double acting reciprocating machines were producing at least 500 CFM per 100HP. With better technology in rotor profiles and tighter machining tolerances, today’s rotary screw machines are getting up to 530 CFM for single stages and 600 CFM for two stages - per 100HP motor size.

Until the mid-1970s, end users did not really pay attention to energy costs because electricity was 3 to 5 cents per kilowatt-hour. Most clients had no idea how much an air compressor costs to operate because it was only a small part of a larger bill. Many of the installations employed oversized piston compressors. When they were replaced with less efficient rotary screw machines it did not manifest in any significant change to the power bill. Everyone was simply overjoyed by the lower maintenance cost.

In the 1990s all vendors had their capacities posted on their brochures, but the published capacities varied considerably. For example; one company had a 100 HP compressor rated at 563 CFM at 100PSI, while the rest of the industry was averaging about 490 CFM. Eventually it was found that this particular model was using a 1.40 service factor motor, running at over 125 HP shaft power. It was performing as published but the actual power used was not clear to the customer.

Motor service factors and HP or KW rating has been an evolving subject also. The majority of the industry was using 1.15 service factor motors and using about 10% of the available 15%. Service factor is really the maximum amps, available at a given voltage, that the motor can reliably deliver, given the other design conditions of temperature, altitude (cooling capacity of the air) and Power Factor. Motor manufacturers will nameplate motors any way the customer desires i.e. a 100 HP 1.25 SF motor or a 125HP 1.0 SF are essentially the same motor if in the same frame size. The air compressor manufacturers select and apply the motors for their compressors in many different ways, but the maximum amps available at a rated voltage is the final determining factor.

In the 1980s the industry became more exacting in what was meant by flow. One company started publishing “free air delivery” or FAD, which measures the air at the inlet and published the total power used. They looked less efficient than the others, but they were really about the same.

This article is not casting any dispersions on any of the air compressor manufacturers. They were all publishing good data, they just measured in different ways!

Originally published in 1947, the CAGI Handbook has been the go-to resource for everything compressed air. Now in its seventh edition, and available electronically on the CAGI website, the illustrated handbook contains engineering information from leading manufacturers and valuable reference data about compressed air systems. In the late 1990s, CAGI and their member companies agreed upon a standard where they would measure their machines to the same criteria. CAGI settled on the globally accepted ISO 1217 Annex C, which is the base standard still used today. This test is for the volume flow through an air compressor. CAGI and Pneurop have adopted a definition for Standard Air that is 20 degrees C, 1 bar absolute, and 0% RH. When testing to 1217, you correct back to the inlet conditions of the compressor to calculate the volume that flowed through the compressor. If you want to know the mass that flowed through the compressor, you have to convert the volume flow to standard conditions. That gives you the SCFM (mass) flowing through the compressor at any given ambient conditions.

Once ISO 1217 Annex C was accepted, CAGI and their members agreed to publish a simple standard datasheet for fixed speed compressors that looks like the following. See figures A and B. As part of the CAGI Performance Verification Program, member companies are required to post these datasheets on their website with easy access for customers. An independent testing lab goes to each air compressor manufacturer and randomly selects three compressors to be shipped to the lab. The lab then tests those compressors and verifies that their performance matches the published data sheets. The results of all the tests are available at https://www.cagi.org/pdfs/cagirotarydirectory.pdf. 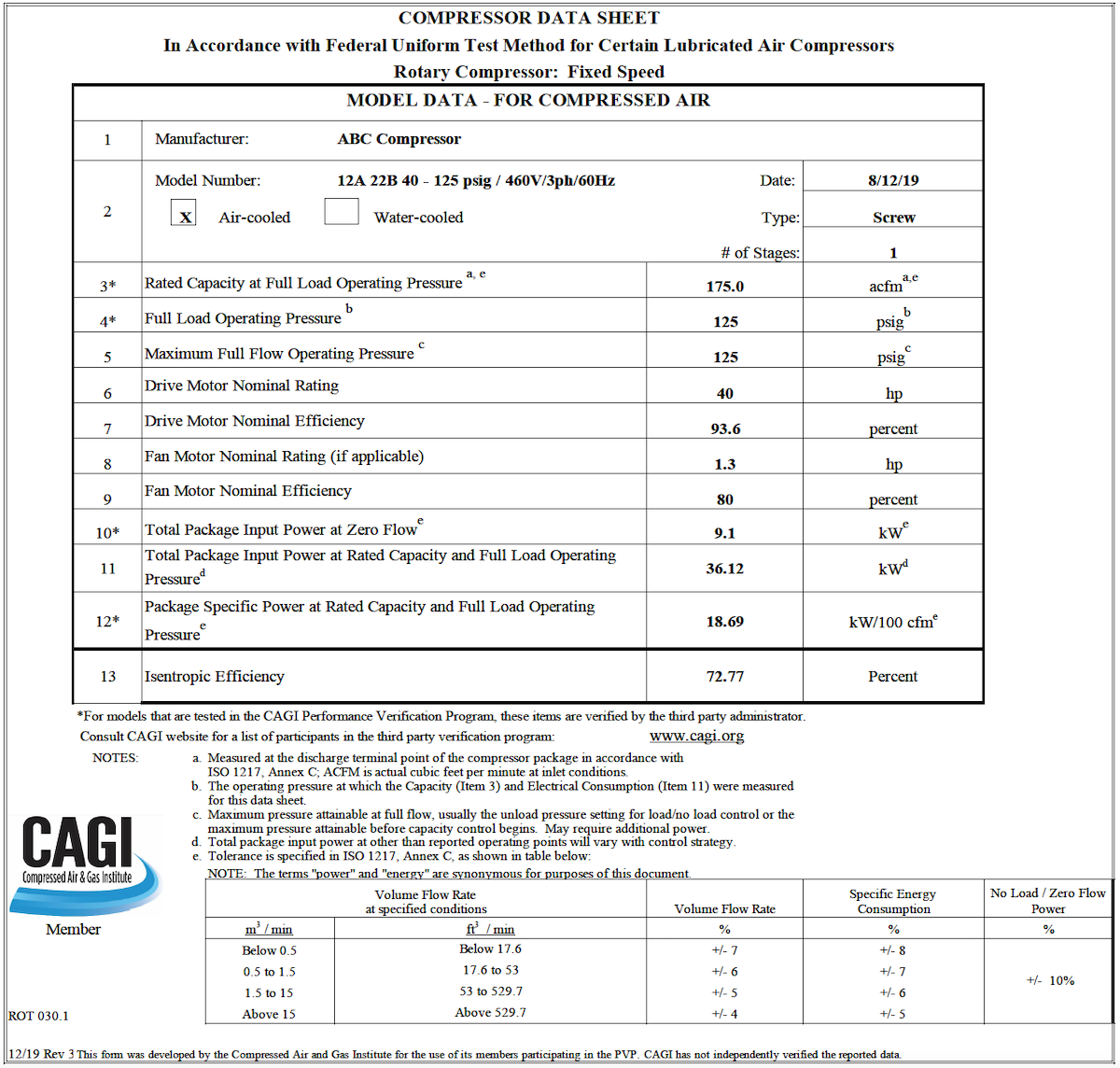 The capacity ratings have a tolerance of up to 7% for capacity and 8% for specific power. The tolerance goes lower for larger air compressors. A tolerance is required because it is impossible to make a compressor that will produce the same flow at the same power consistently.

The Energy Policy and Conservation Act, as amended, (EPCA) covers certain commercial and industrial equipment, including compressors, for which the Department of Energy (DOE) is authorized to establish energy conservation standards. DOE has determined that EPCA covers commercial and industrial air compressors and has been considering energy conservation standards and test procedures for such equipment. In January 2020, DOE has published a Federal Register notice of final rule pertaining to energy efficiency standards for compressors, titled 85FR1504. CAGI and their members fully support the use of isentropic efficiency as the standard of comparison on compressor efficiency. The simplest way to define isentropic efficiency is shown in Figure 2. 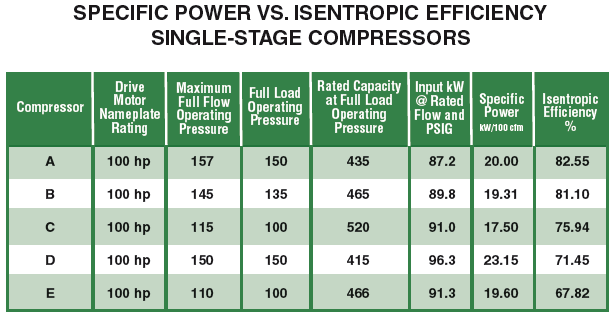 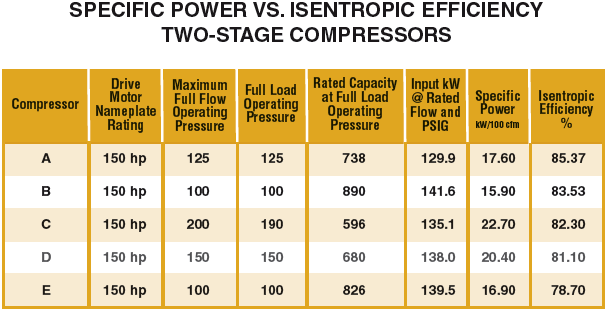 Isentropic efficiency comparisons will keep the compressed air industry working to improve efficiencies which in turn will save lots of energy in the future. Someday you may see the DOE or state governments requiring a minimum isentropic efficiency level for a compressor to be sold. 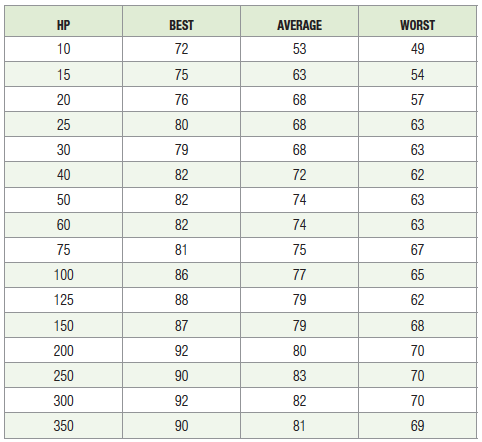 Figure 5. Isentropic efficiencies, by horsepower, for lubricated, fixed-speed, rotary screw air compressors. Based on CAGI datasheets dated up to January 2021.

Brian Parks has worked in the compressed air industry for over 45 years. He has worked in service, sales, machine testing, engineering and regional management in both the US and abroad for two different air compressor manufacturers. After retiring, he started Fourth Utility Consulting, initially doing distributor training, auditing and audit reviewing. Later, the company started doing consultation for compressor companies to help establish the most efficient products by using CAGI datasheet comparisons to increase efficiency. Fourth Utility has a database of over 6,500 archived data sheets, which are used for correct auditing and auditing reviews.

For more information on this topic, visit CAGI’s website to view the educational video on isentropic efficiency at https://www.cagi.org/education/videos.aspx.