Growing operational costs and lower than average occupancy rates spurred Apple Farm Inn and Suites, San Luis Obispo, Ca., to explore economic and facility efficiency benefits obtained through the installation of an ozone laundry system. At the Apple Farm Inn laundry facility, an evaluation was conducted in late 2006 to early 2007, comparing the costs of laundering by traditional methods versus ozone laundering.

The Apple Farm Inn is a hospitality hotel with 104 occupancy rooms. Laundry processed includes bedding (sheets, blankets, pillow cases) and towels (from rooms and swimming pool area), bath mats and robes. The laundry room consists of two 80 lbs Unimac Commercial Washers and two 120 lbs Unimac Commercial Dryers. Twenty loads per day were laundered on the average, for a total of 1,600 lbs per day. Traditional laundering was conducted for one month, followed by ozone laundering for a second month.

The ozone system installed for this study was a ClearWater Tech EcoTex system consisting of an ECO2 ozone generator (maximum ozone output rating of 8 grams per hour at 3% concentration by weight), a Sequal Technologies Workhorse 8c Oxygen Concentrator, an AeroQual 100 Ambient Air Ozone Monitor, and an EcoTex Diffuser installed in the sump of the clothes washer. 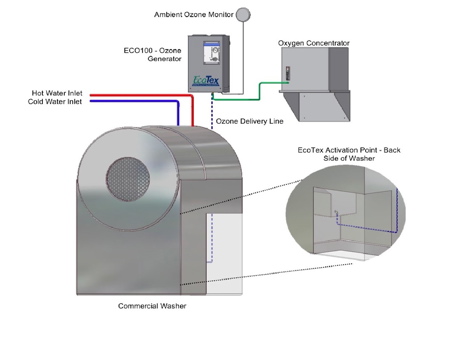 A key step in the application of ozone to be used in a commercial laundry facility is to determine the appropriate cycle configurations. Among other factors, these wash cycles are designed based on the type of linen being laundered, the soil content of the linen, and the capacity of the washer. Figures 2 and 3 provide a visual indication of the differences between the traditional wash cycle and ozone wash cycle, respectively, used at the Apple Farm Inn. Chemical signals are as follows; S1 = Break (alkali, pH increase chemical), S2 = Detergent/Suds, S3 = Bleach, S4 = Sour/Soft, S9 = Ozone 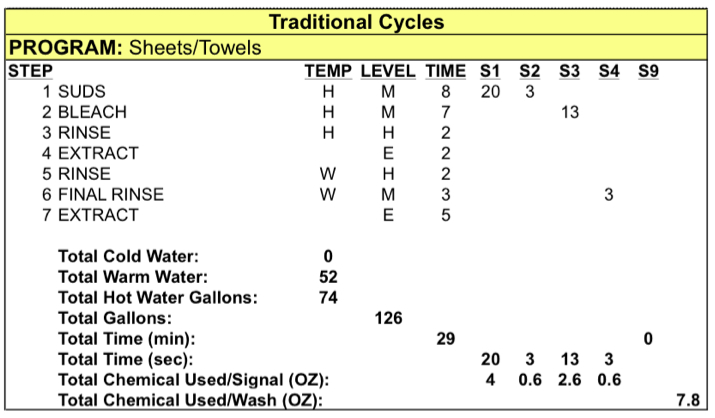 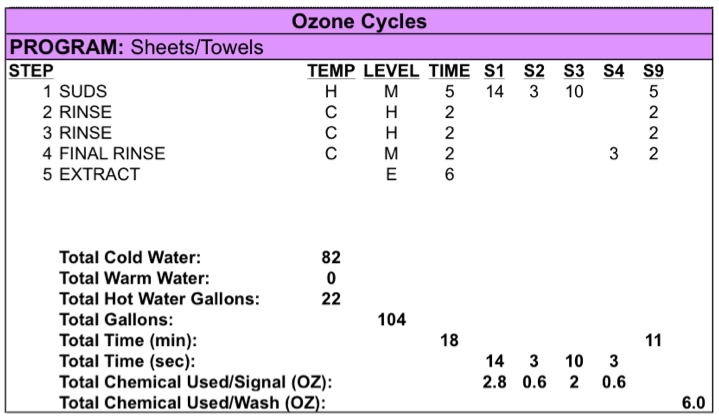 The ozone cycle uses two fewer steps with the removal of an extract and combining detergent (suds) and bleaching into one step. Removing these two steps plus reducing the amount of water and time in each of the steps allows for 22 fewer gallons of water to be used (18% savings) and 11 minutes less in over-all time of laundering -- time which not only saves labor but also electrical consumption.

An analysis also broke down the amount of hot, warm and cold water used in the laundering cycles. The ozone cycle is shown to reduce the volume of elevated temperature water by 37 gallons (27%) per wash load. Additional savings in natural gas also result from the use of less hot water. A portion of the savings shown in the test case cycles comes from chemicals, which has been reduced in the ozone cycle by 1.6 ounces (21% savings).

Figures 4 and 5 show the Traditional and Ozone formula totals used in each of the one month test times for each process. The bottom two lines show the costs per month and projected costs per year, respectively. The ozone system resulted in annual cost savings in all categories - water, chemicals, electrical (with ozone considered as electrical), natural gas and labor of \$13,248, a 38% total annual savings. 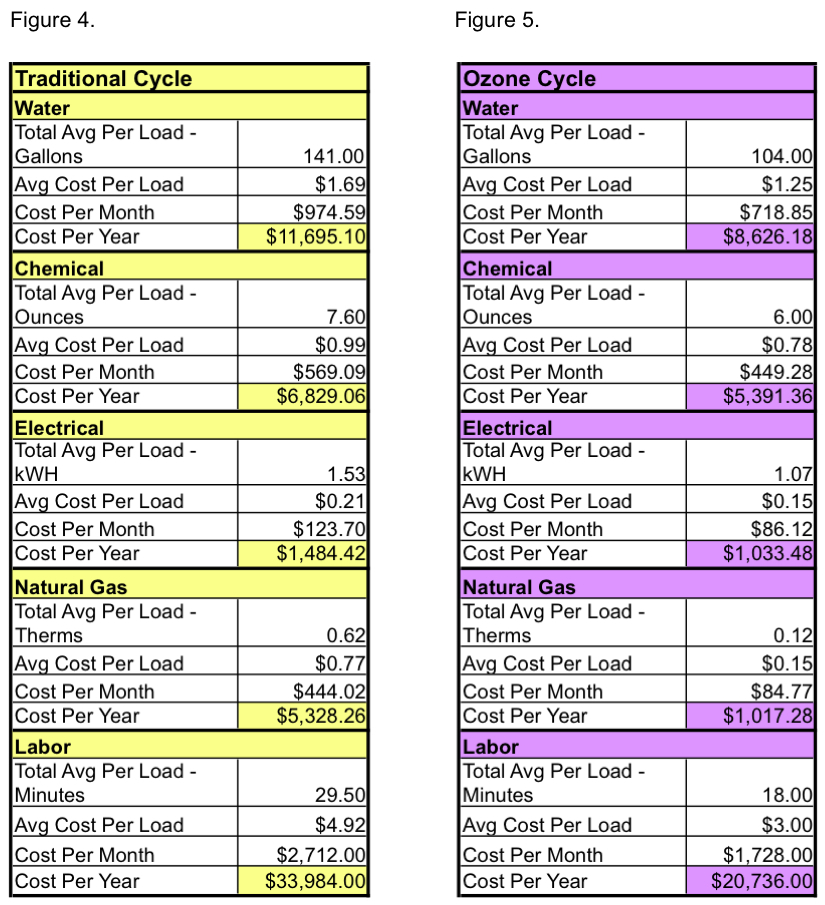 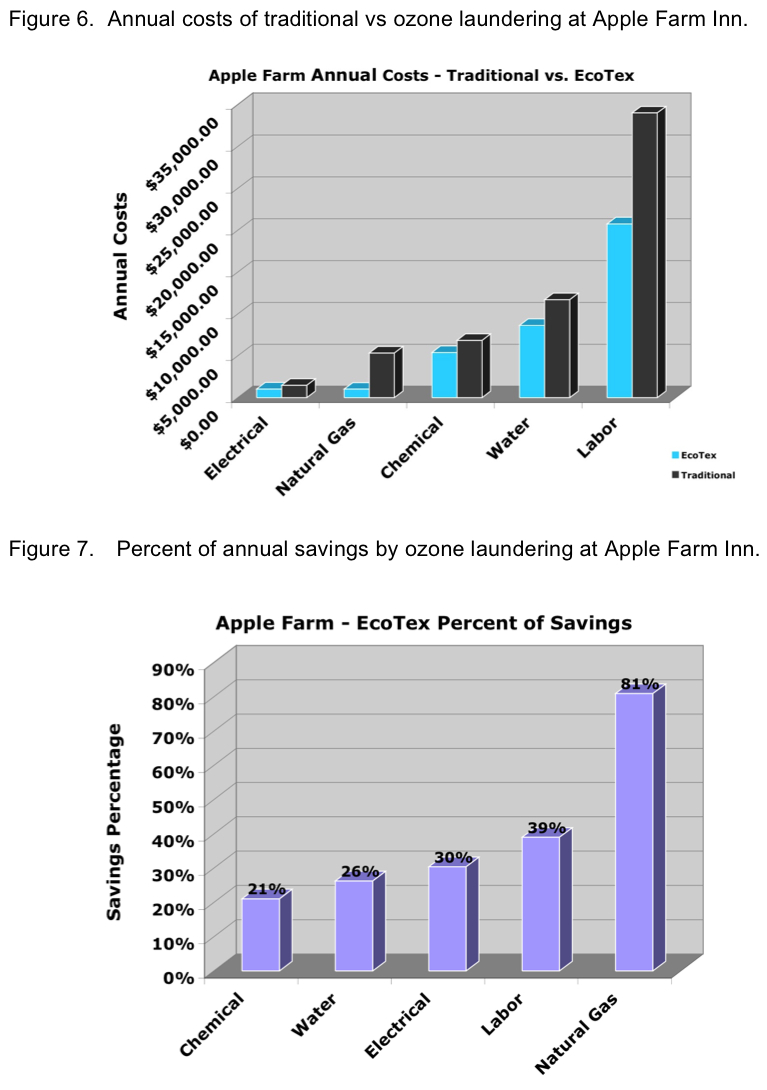 One of the most interesting benefits found in the Apple Farm Inn case study is that of labor and production savings, which also can be quantified as facility efficiency. This efficiency was equated to the overall reduction of cycle time saved by the ozone laundry system. This does not necessarily mean that the facility paid less in staff labor, but rather that the staff was available to perform other housekeeping duties. The efficiencies of less water and fewer rinsing cycles resulting from ozone laundering allowed the Apple Farm Inn to launder nearly 60 more loads per month more than with their traditional wash cycles.

Ozone laundry systems not only provide microbiological benefits, but through reduced cycles times, water, energy, and chemicals, they can also pay for themselves - typically within short time periods. As shown in Figures 4, 5 and 7, the ozone laundry system has saved the Apple Farm Inn nearly 40% of the annual overall costs related to the washing of linens in their laundry facility. This savings paid for the ozone laundering system in less than eight months.

The rate of return on a system such as this may increase dramatically through state and local energy providers and water companies who provide grants, rebates and other incentives to facilities that install energy and water-saving technologies and equipment.

Figure 8 shows an estimated payback time of 7.7 months resulting from the ozone laundering system, including the labor savings, of \$1,756 per month or \$22,517 (annually). 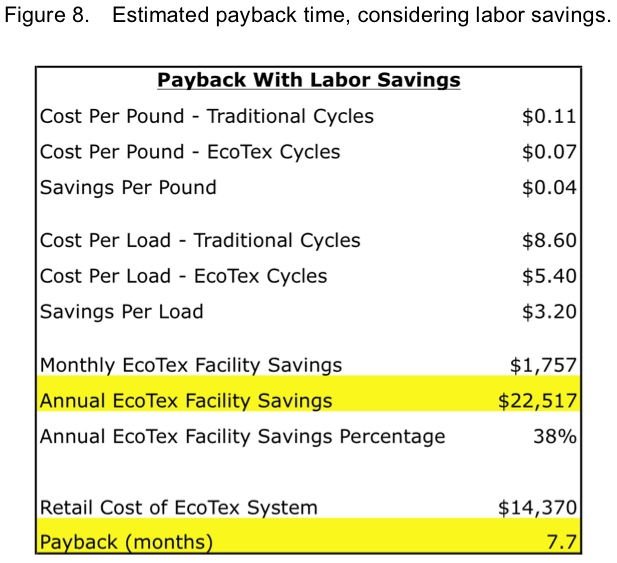 Although wash formula design and results may vary from facility-to-facility, ozone-laundering formulas and processes can provide this higher level of cleanliness and disinfection while increasing a facility’s energy and labor efficiencies. For nearly three years, the Apple Farm Inn and Suites has benefited financially as a result of the lower consumption of water (especially hot water), energy and labor. In addition to the savings, the facility and its management have been very grateful to the addition of their state-of-the-art environmentally-friendly laundry system.

Marc DeBrum is in Applications Engineering at ClearWater Tech, LLC. He can be reached at 800-262-0203 or by e-mail at mdebrum@cwtozone.com. You can also go to the website at http://www.ecotexlaundry.com.