By the Compressed Air & Gas Institute

Nitrogen is the most widely used gas in industry and the most common pure element on earth. Nitrogen is a constituent element of air, making up 78% of the atmosphere that surrounds us.  Oxygen is the second largest constituent of air comprising 21%.  Nitrogen occurs naturally as a molecule consisting of two atoms of nitrogen that are held together by a very strong and stable triple bond. This triple bond makes the reaction of nitrogen with any other elements very unlikely, except under conditions of extreme pressures and temperature. This chemical inactivity makes nitrogen a perfect fluid to use in industrial processes and its inertness is key to what makes its use so prevalent. Nitrogen does not retain water molecules in the form of vapor which makes nitrogen a dry gas with an atmospheric dew point of -94°F. Nitrogen is colorless, odorless, and tasteless, additional characteristics that make it the go-to gas for countless industrial and scientific applications.

Nitrogen gas is used primarily for the following purposes and all of the nitrogen applications described below take advantage of at least one of these characteristics, many applications depend on all four:

Modified Atmosphere Packaging (MAP) accounts for a significant amount of nitrogen usage in the food and beverage industry. MAP involves injecting nitrogen into beverage or food packaging to purge and displace any oxygen-containing air with nitrogen. Oxidation of lipids in food products causes rancidity. Since oxygen is replaced with dry, inert nitrogen in MAP packaging, no product oxidation will occur. The result is maximized product shelf life. 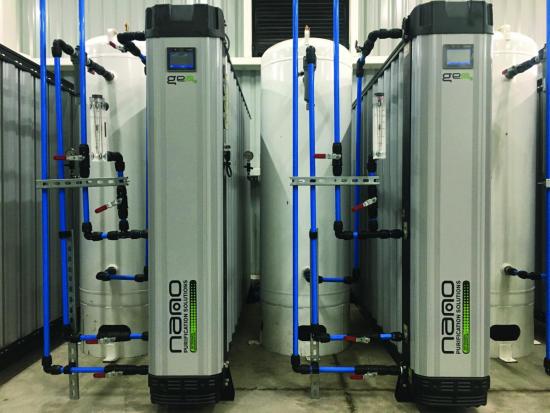 Modified Atmosphere Packaging (MAP) accounts for a significant amount of nitrogen usage in the food and beverage industry.

Metal fabrication industries rely on lasers to cut shapes from different types of metals. To produce a clean edge with a laser, the molten metal must be blown away by an assist gas. By using nitrogen as the assist gas, oxygen is excluded from the cutting zone thus eliminating the unwanted effects of oxidation and discoloration. This results in a clean-cut edge that does not require additional work to properly finish.

Paints and adhesives require oxygen to harden. Storage and processing vessels within these industries that use these products are filled with nitrogen so that a blanket of nitrogen covers the area above the surface of the product held within a storage tank. By blanketing with nitrogen, the oxygen-initiated hardening or curing process is rendered inactive. By using nitrogen rather than air to dispense or transfer materials between stages of the manufacturing process, the manufacturer retains the integrity of the product by eliminating unwanted oxidation.

The metal heat treating process uses controlled heating and cooling of metals to change their properties of hardness, ductility, surface finish, and corrosion resistance. Metals oxidize due to their reaction with oxygen in the atmosphere at room temperature and at an increased rate at elevated temperatures. Oxidation affects the surface finish of the metal as well as its mechanical structure and strength. Heat treating, performed in an environment of nitrogen, eliminates this unwanted oxidation and increases the efficiency of the heat-treating process.

Three elements must be present for combustion; fuel, heat, and oxygen. Remove or reduce any one of the elements and there is no fire. In processes where combustion is prohibited, an easy and reliable method of removing oxygen from the combustion equation is to replace the oxygen with nitrogen. By blanketing tank-stored volatile liquids, such as gasoline and solvents, with an atmosphere of nitrogen there is no chance of fire within the tank. Similarly, in critical environments such as computer server operations, document storage facilities, museums, and libraries where the act of extinguishing a fire by common methods is often more damaging than the fire itself, a controlled oxygen environment can proactively eliminate the chance of combustion by removing the oxygen variable from the combustion formula. 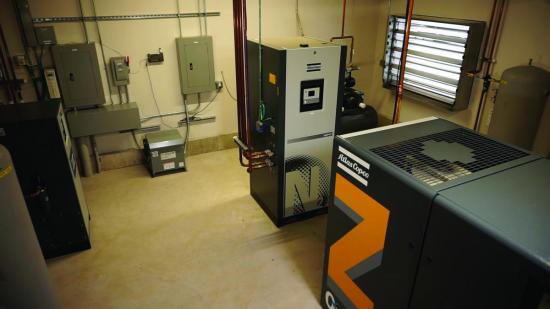 In the oil and gas industry, the processes of inerting, well stimulation, and well drilling consume large quantities of nitrogen. The industry has long depended upon the inertness of nitrogen to provide combustion-preventing atmospheres for tank and pipeline blanketing. In a process called nitrogen lifting, high pressure nitrogen is injected into the oil-bearing formation to maintain optimal well productivity by increasing the downhole natural formation pressures that dwindle as the well ages. In the drilling process, the introduction of pressurized nitrogen gas allows the use of lighter drilling fluids which are pumped to the drilling face to facilitate debris removal and cool and lubricate the bit. Lighter drilling fluids reduce the load on drill bits which increases their efficiency.

Most bacteria need oxygen and water to survive. If oxygen is removed from a product or the product is desiccated so that no water is present, bacteria cannot live and grow. If there is no presence of bacteria then there is no mold, mildew, or spoilage. Sterile environments void of bacteria are crucially important within the pharmaceutical industry. Because product contamination with microorganisms is extremely costly and dangerous, pharmaceutical manufacturers use nitrogen to move fluids, both liquid and solid, from one stage of production to another. Nitrogen eliminates exposure to oxygen and, due to its inherent dryness, nitrogen eliminates exposure to water.

As shown in the previously described applications, nitrogen plays a key role in modern industry.  One way to look at nitrogen usage is not to determine where it should be used, but rather to use nitrogen wherever oxygen is not allowed. By removing the deleterious effects of oxidation, a nitrogen environment void of oxygen provides tremendous benefits to many industrial processes.  These benefits include reduced spoilage, reduced scrap and rework, increased safety, and increased process efficiency.

Nitrogen is abundant, safe, and readily available for use. The traditional method of supplying nitrogen to industry is to separate it from atmospheric air by cryogenic distillation. Once separated, the nitrogen is containerized and delivered to site for use. Depending upon the amount of nitrogen required, the containers could be relatively small high-pressure gas cylinders or larger dewars; specialized vacuum flasks used for storing cryogenic, liquid nitrogen. For larger nitrogen demands, bulk cryogenic liquid nitrogen tanks are installed at site that are routinely topped off as tank volume reduces. In liquid cryogenic storage systems where nitrogen gas is required, the liquid must be evaporated into a gas through the use of heat exchangers or evaporators. Nitrogen supplied in the above fashion has a purity of 99.998%. 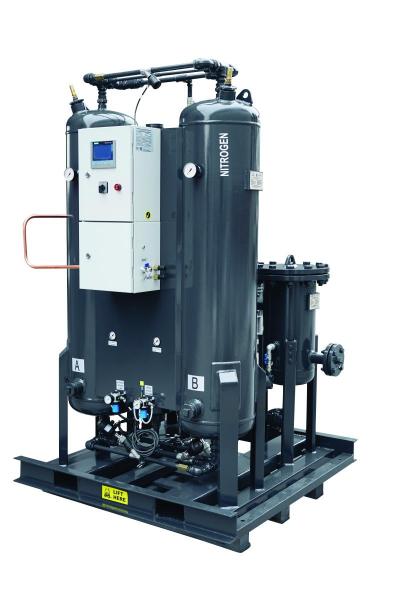 In addition to the cryogenic process described above, nitrogen can be separated from air by two other technologies: Pressure Swing Adsorption (PSA), and Membrane Separation. In the PSA process, pressurized air is forced through a vessel filled with carbon molecular sieve material (CMS). The CMS selectively adsorbs the smaller oxygen molecules and allows the larger nitrogen molecules to pass through. The discharge stream has a nitrogen purity range of 95% to 99.999%. Once the CMS has adsorbed its maximum amount of oxygen, it is regenerated by purging the vessel with compressed nitrogen, making it ready to adsorb oxygen again. The nitrogen membrane module technology uses thousands of hollow fibers contained within a tube. As compressed air flows through the hollow fiber membrane, the gas components separate by selective permeation. Oxygen and other waste gases diffuse through the membrane fiber wall to the atmosphere, while nitrogen is retained and passes through the center of the fiber to the application. Fast gases, such as oxygen along with water vapor permeate easily through the membrane wall and exits permeate port. Slow gases, like nitrogen do not easily pass through the membrane wall, therefore exiting the end of the tube. In both technologies, the volume of purge nitrogen is significantly less than the nitrogen produced during one generation cycle. 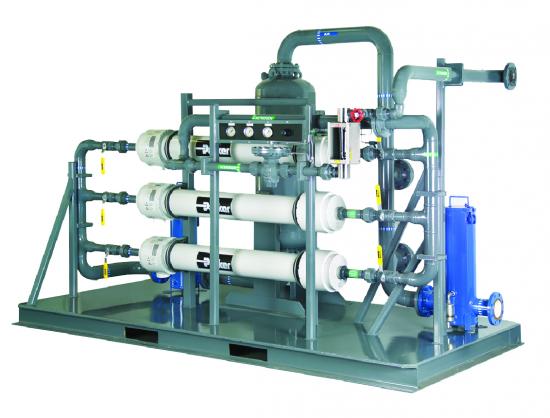 Both PSA and Membrane Separation operations can be installed on-site where the nitrogen is used, providing a multitude of advantages over the traditional nitrogen delivery methods previously described. In many instances a properly sized on-site nitrogen generation plant can provide a two year or less simple payback versus a cryogenic system, potentially making the on-site option a very cost-effective capital investment project. 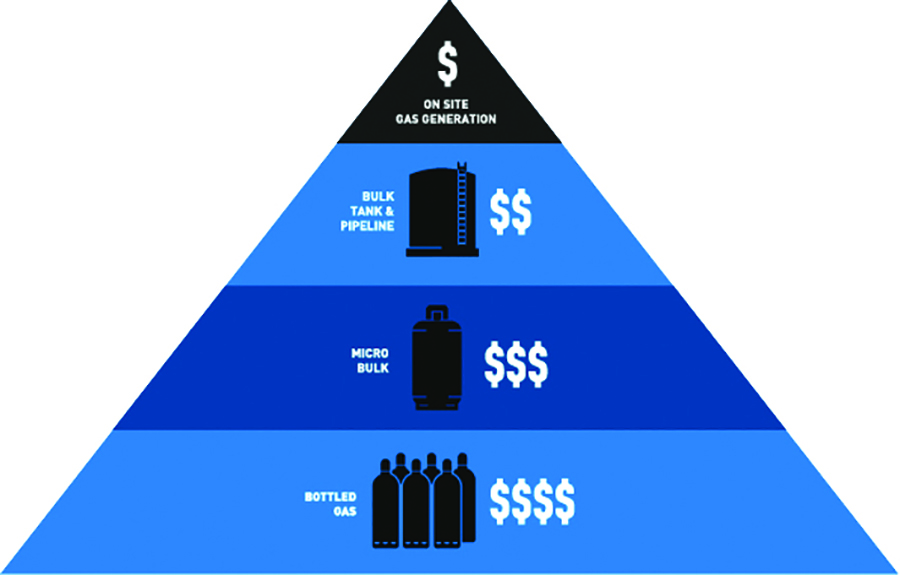 The cost of delivering nitrogen.

Safety is always a concern when dealing with high pressure and cryogenic liquids. High pressure cylinders are often pressurized to several thousand psig, presenting a safety hazard if not properly stored and used. Both high pressure cylinders and liquid dewars are heavy and cumbersome to stage where the nitrogen is required. Furthermore, continually connecting and disconnecting high-pressure cylinders and liquid dewars increases safety concerns and the chances for an accident. Due to its -321°F boiling temperature, liquid nitrogen stored in closed containers must continuously vent evaporated gas to atmosphere. If not vented, the gas will quickly create high pressure within the container, dewar or bulk tank, and present an explosion risk.  This vented gas is a costly waste.

On-site nitrogen generation delivers nitrogen of a consistent purity level. On-site plants are fitted with oxygen analyzers that constantly monitor delivered nitrogen purity with relation to its oxygen content and alarm the customer if delivered gas purity is less than specified. Continuous system monitoring and control of the on-site nitrogen operation is available via multiple connectivity devices to the customer’s building management software (BMS) to ensure reliable system operation and performance.  This allows for proactive adjustment of the process to rectify any purity or delivery issue before it becomes a problem. Many times, high-pressure gas cylinders are re-filled with different gasses, making contamination a real possibility and making it difficult to ensure the purity of the delivered nitrogen. The purity of liquid nitrogen from dewars or bulk tanks can vary and the expansion process is difficult to control. These variables make for unreliable nitrogen purity from liquid systems.

On-site nitrogen generation places the reliability of nitrogen supply under the control of the user.  With on-site generation there is no middleman to deal with regarding on-time delivery of nitrogen; the user is in complete control. Inclement weather, natural disasters, road conditions, and far distances can negatively affect the reliability of gas delivery. On-site systems can be sized and set up to provide redundancy to avoid unscheduled downtime in the event of an issue or when maintenance is required, thus further increasing the peace-of-mind factor of not being dependent upon a gas supplier to make timely deliveries. 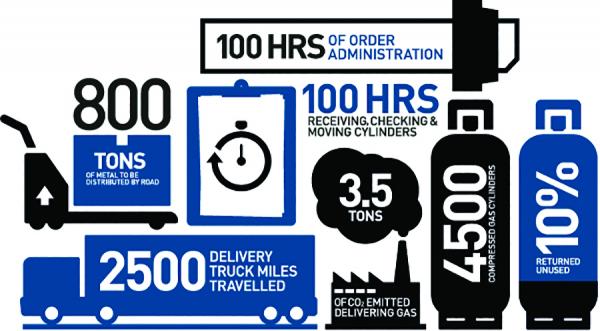 On-site Nitrogen Generation is the Solution

On-site nitrogen generation systems provide a reliable, efficient, and sustainably safe solution to supplying the nitrogen that industry requires. On-site generation provides consistently high-purity nitrogen to match the demand of the application at a fraction of the cost compared to traditional methods of delivering gas to site. On-site generation increases operations safety, eliminates cumbersome gas cylinder logistics, ends long-term contractual obligations, and places process control firmly in the hands of the customer. By following Booker T. Washington’s advice to, “Cast down your bucket where you are.”, industries that invest in on-site nitrogen generation systems are discovering that they can economically and reliably harvest the endless supply of nitrogen in the atmosphere to deliver a continuous supply of high purity, clean, and dry nitrogen gas to satisfy their production requirements.

All photos are courtesy of the Compressed Air and Gas Institute.

For more information, visit the CAGI web site at www.cagi.org.