The plant is located in a geographical area subject to freezing temperatures reaching -40 ⁰F in the winter months. Two systems of outdoor compressed air lines feed instrument air and general plant air to various compressed air demands in a very large complex. The general plant air is considered non-critical and is supplied through a back-pressure valve which chokes off the plant air if the instrument air pressure falls below critical levels.

Data loggers were placed on the system to determine baseline parameters for compressed air pressure, power and flow (Figure 1).  The logging revealed the following: 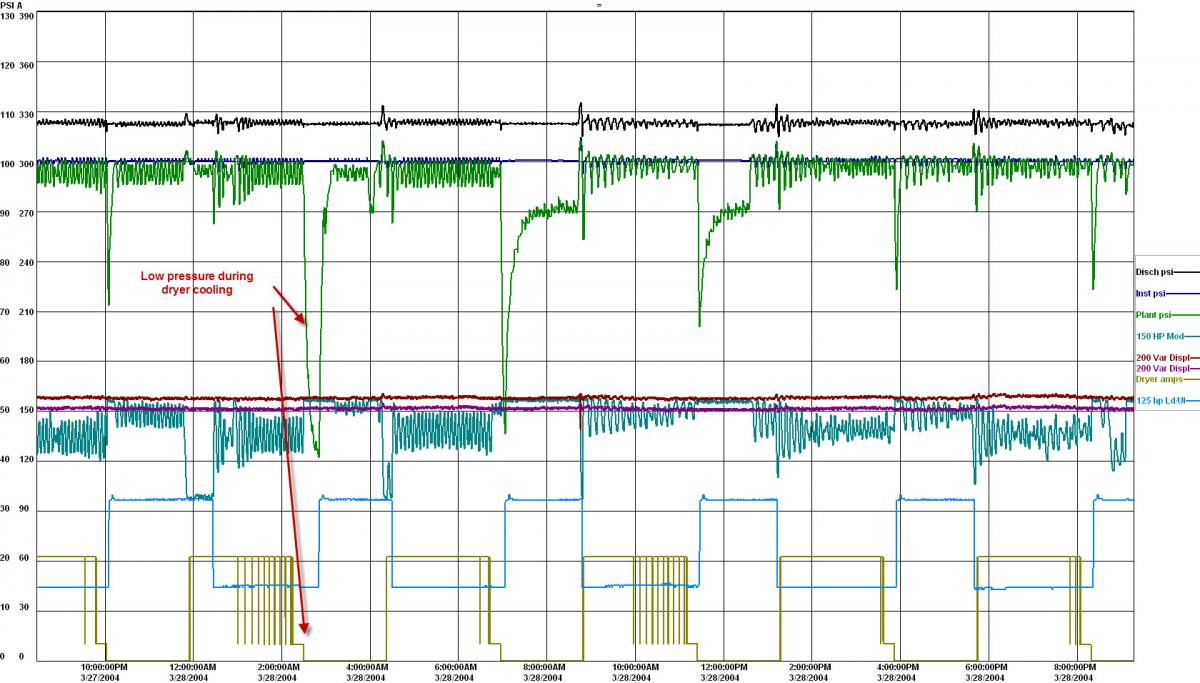 It was quite obvious, from the pressure and amp profiles, that the heated blower-purge compressed air dryer was causing some sort of high demand event leading to low pressure in the plant air system. This appeared exactly every four hours and was in line with the cooling cycle of the dryer, which starts right after the final blower cycle.  When the cooling cycle starts, the main compressors all went to full load, and the pressure in the plant air system dropped to extremely low levels. This event caused the reciprocating compressor to be run solely to support dryer purge but with significant periods of unloaded run time.

Most heated blower-purge style dryers work on a four-hour cycle, with one tower drying while the other is being regenerated.  The regeneration cycle directs atmospheric air through electric heaters, then through the desiccant bed being regenerated to drive off the water captured in the bed.  Once the heating cycle is complete, usually ending when a heat spike signals all the desiccant has reached a critical temperature, the heaters are turned off and atmospheric air is allowed to cool the desiccant for a period of time, in this case 15 minutes. Too much atmospheric air-cooling would allow ambient moisture to prematurely saturate the desiccant.  Since the 15-minute time period is not enough time to fully cool the desiccant, some other method of cooling is required.  If the desiccant is not cooled to a critical temperature, a dew point spike will develop when the dryer switches sides because hot desiccant will not capture water vapor.  The extra-cooling is provided by passing already-dried compressed air through the desiccant bed for a period of time.

The normally rated flow for compressed air cooling purge in these dryers is 2% of the dryer nameplate, however, this two percent is the average over the complete 4 hour cycle.  Typical cooling cycle duration is one hour out of 4 hours making the flow during the actual one hour cooling cycle about 8% of the dryer nameplate rating, in this case the expected flow was 240 cfm.  Typically some sort of temperature control detects when the desiccant has been cooled satisfactorily which turns off the purge to save energy.

Often these dryers have onboard dew point controls that delay the regeneration until such time as the desiccant is fully saturated.  Detecting this condition, a dew point sensor will then initiate a delayed regeneration cycle saving significant energy if the dryer is lightly loaded.  This 3,000 cfm rated dryer was loaded at less than 50 percent capacity and winter ambient conditions had inlet air temperatures well below the rating of the dryer.  A well-controlled dryer of this style should have been consuming 50% less energy than it actual.

The pressure differential across the dryer, accounting for almost 10 psi even at only 50 percent of dryer capacity, was traced to an extra redundant inlet filter.  It was recommended to eliminate  or better-maintain this filter to reduce pressure drop. 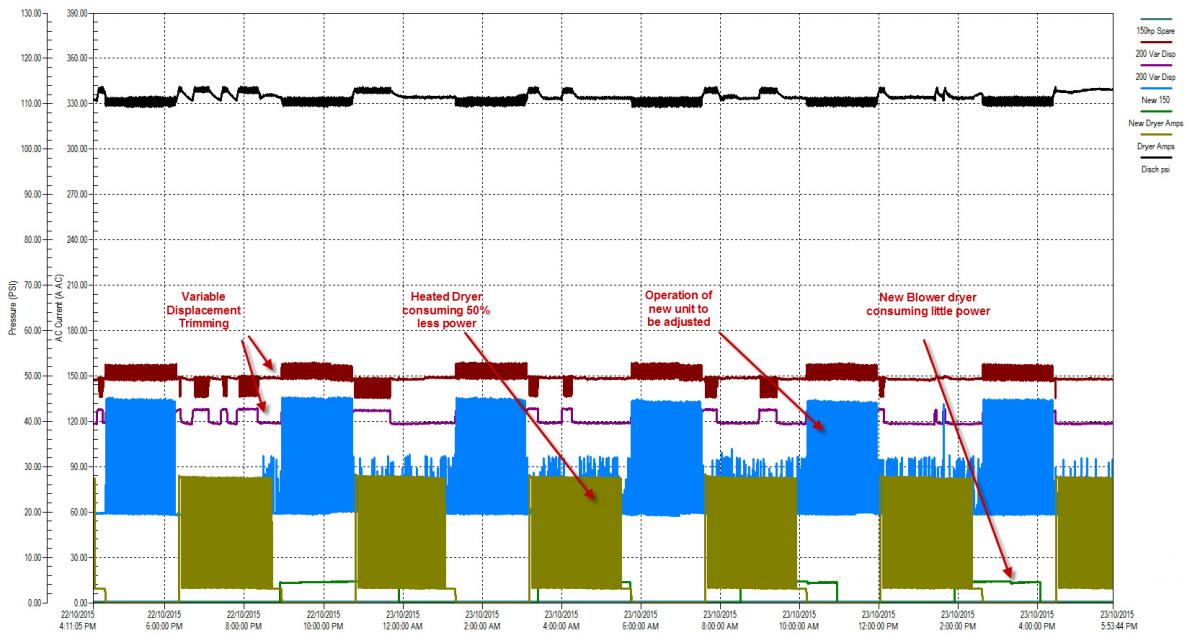 Figure 3: Plant pressure and off-hours flow was greatly improved after the system changes

The air compressor control was set up so that a modulating compressor was acting as a trim unit, with two other main compressors as base units. The two 200 hp compressors, however, had very efficient  electronically-controlled variable capacity capability, but this wasn't being used. The two units could be tied together so they could work in tandem as excellent trim units.

The reciprocating compressor was required to constantly operate to feed the excessive dryer cooling flow.  Since this flow occurred for slightly less than 2 hours, every four hours, the compressor spent over 50 percent of the time running unloaded.  Problems were detected in the compressor pressure controller, the unit failed to consistently load when low pressure was detected, causing deep low-pressure occurrences in the pressure profile every four hours.

It turned out that once the dryer cooling purge adjustment was corrected the reciprocating compressor was not needed. The plant set out to replace the inefficient modulating compressor with something more efficient.

The following system improvements were recommended (although not all are yet implemented):

The reciprocating air compressor was decommissioned and removed and a new air compressor installed.  The dryer selected for the new compressor is a heated blower-purge dryer properly matched for the capacity of the compressor. This dryer is designed for closed cycle cooling, rather than compressed air, to pull down desiccant temperatures before dryer switchover and the dryer has dew point controlled switching saving power during light moisture loading. No coordinated compressor control was installed at this time but the two variable displacement compressors are set up to be used as trim capacity. Some better coordination is planned in the future to eliminate unloaded run time of the new air compressor. 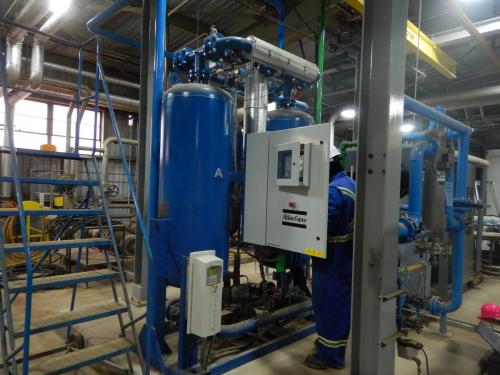 In all, system improvements (mainly improvements to dryer control) have saved 1,183,000 kWh per year equivalent to \$118,000 in electrical savings at 10 cents per kWh for a reduction of 31 percent.  There is a further savings potential of about 500,000 kWh if further changes to the air compressor controls are implemented. This project is being considered for the future.