One of the most satisfying parts of being a compressed air system auditor is resolving compressed air system reliability issues. This article exposes a seldom, if ever, mentioned problem that can occur when air dryers are dedicated to air compressors. It examines a real-world application and discusses the action taken to remedy the situation.

A portion of the general contractor’s project was to purchase and install a lubricated rotary screw air compressor along with a heatless desiccant dryer, a 1,060-gallon wet air receiver, and “no-air loss” auto drains. The air compressor was rated for 518 acfm at 110 psig, while its dedicated dryer was rated for 500 scfm at inlet conditions of 100⁰F (38°C) and 100 psig.

The equipment was installed indoors at sea level and the no-air loss auto drains were installed on the air receiver and the dryer pre- and after-filters. The reader would be correct to question the dryer sizing along with specifying an auto drain for the dryer’s after-filter. The project specifications required the dryer to deliver air at -40⁰F (-40oC) pressure dew point (PDP). The equipment was commissioned by a local distributor owned by the air compressor manufacturer.  Three weeks after the commissioning the dryer wasn’t maintaining -40⁰F (-40oC) PDP, which was a problem for the contractor because they wouldn’t receive their final payment until it met the specification.

The distributor responded quickly and found the mufflers plugged along with an eight-psig drop across the pre-filter. The service person cleaned the mufflers, removed the balance line on the pre-filter’s no-air loss drain because it was connected downstream of the pre-filter, and adjusted the purge pressure. The pre-filter element was clean so it was assumed that the differential indicator was bad.

The PDP never recovered so the service person returned two weeks later. He reinstalled the balance line on the pre-filter no-air loss auto drain, moved the control air for both drains from the dry side of the dryer to its wet side and decided to order a new pre-filter and differential gauge. When he left the site the PDP was improving while the dryer was cycling with its upstream air compressor turned off, but it never reached -40⁰F (-40oC) PDP.

The service person returned again nine days later and replaced the pre- and after-filters with larger ones and verified that the purge orifice was correct. It appears the original filters were undersized because the new ones have the same model number as shown in the dryer’s parts manual. He also disconnected the new equipment from the system and vented its air to the atmosphere but the PDP didn’t improve so he decided the desiccant should be replaced.

The service person returned once again 18 days later to change the dryer desiccant. He installed enough desiccants to increase the dryer’s rated capacity to 600 scfm. He didn’t find any sign of oil or water in the dryer’s towers. He also found the oil level in the air compressor to be okay.  After the dryer was put back online the PDP read -54⁰F (-48⁰C), but three days later it was worse than the required -40⁰F (-40⁰C).

Approximately two months later the contractor called and asked for my help. Due to the COVID-19 pandemic it was decided to attempt to resolve the issue remotely, even though most compressed air system issues can’t be resolved remotely. After reviewing the communications between the engineering firm, the equipment supplier, and the contractor the following facts were gathered:

Our initial thoughts were:

The contractor investigated these possibilities and found:

After removing the air receiver’s auto drain and draining the water out it was decided to try and regenerate the desiccant once again. The contractor shut off the air compressor over the weekend and increased the purge airflow to help with the regeneration. The PDP improved to -42⁰F (-41⁰C) by the end of the weekend, but shortly after the air compressor was put back online it worsened.

We decided a site visit was required and the following would need to be done in preparation for the visit:

In order to get familiar with the compressed air system I arrived a day prior to the plant shutting down. I found:

The next day the contractor removed the desiccant from the towers and no moisture or oil was found in the towers. The old desiccant appeared to be slightly grayer than the new pure white desiccant. Then sections of the piping upstream of the pre-filter and downstream of the after-filter were removed so the flow meter and exhaust muffler could be installed. At the same time the pre- and after-filter housings were removed so the filter elements could be replaced.

It was at this time we noticed oil on the after-filter element and we began to suspect the cause of the dryer problem. There wasn’t any oil in the piping upstream of the dryer, but we did find oil in the downstream piping. At this point we were pretty sure the reason dryer couldn’t maintain -40⁰F (-40⁰C) PDP was because the plant didn’t shut off the dryer when they shut off the air compressor. 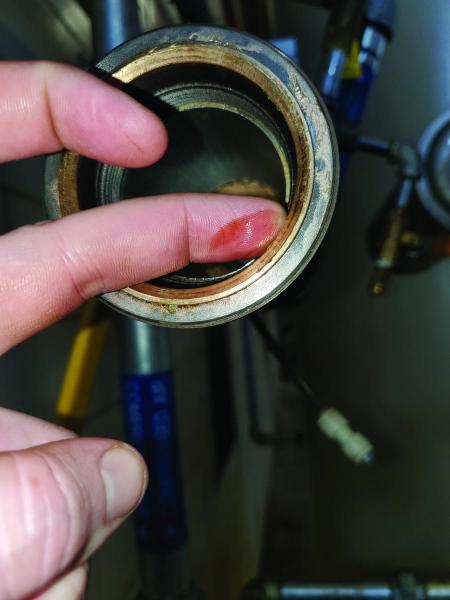 Oil in the compressed air piping downstream of the dryer pointed to the potential problem with the desiccant dryer’s inability to maintain the proper PDP.

With the upstream air compressor shut off the dryer’s purge air had to come from the main header that contained oil. Hence, the purge air from the main header flowed backwards through the after-filter leaving oil residue on the after-filter element and then into the offline tower contaminating the desiccant before it was exhausted out through the mufflers. However, we still had to prove our theory. 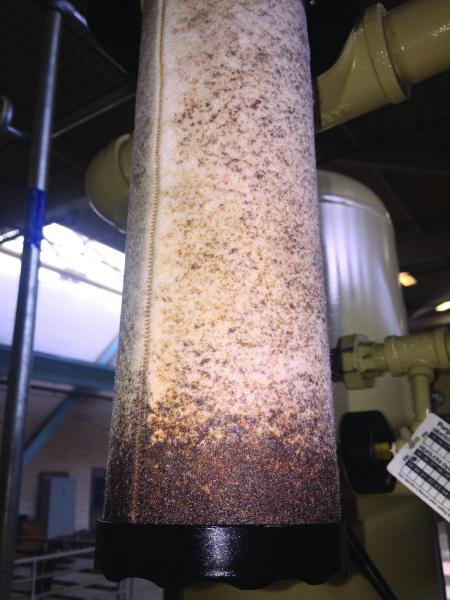 Oil also found on the after-filter element meant the plant didn’t shut off the dryer when it shut off the air compressor. This strongly suggested it was the reason the dryer wasn’t maintaining the proper PDP. 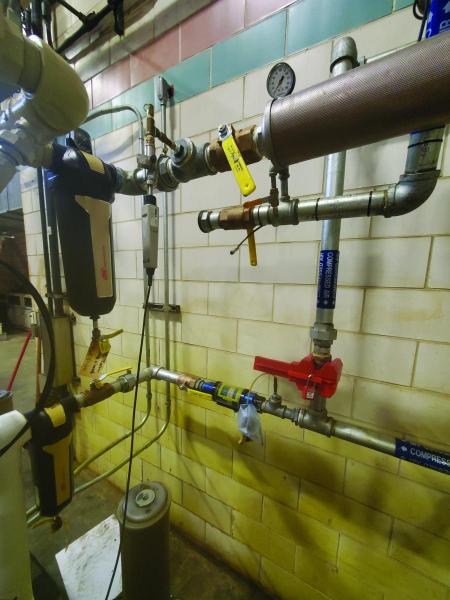 Shown is the test setup used to help validate the cause of the dryer problem. 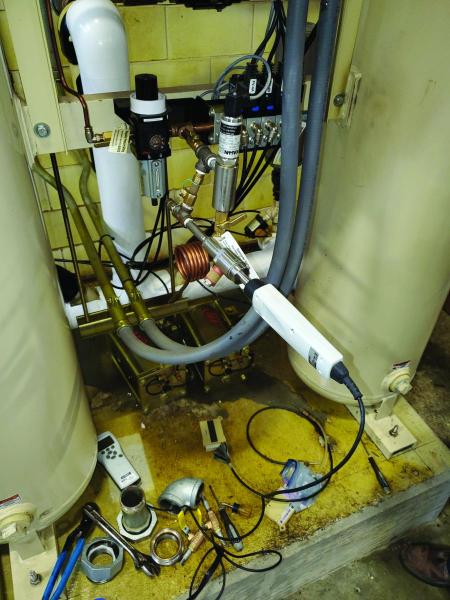 After the site visit the plant installed a check valve, downstream of the after-filter and started shutting down the dryer whenever they shut down the new air compressor. It’s been a few months since the test was conducted and the dryer is still maintaining -80⁰F (-62⁰C) PDP.